Shenanigans Ahead Of Basel III Implementation
King World News note:  These kinds of shenanigans are to be expected ahead of the implementation of Basel III. The banks are now quite desperate to exit paper gold shorts and the best way to do that is to take the price lower. But they may find, this time, that they run into a brick wall of sovereign buying.

Chart of the Day: Gold repeating the January 2021 correction?
June 3 (King World News) – Top Citi analyst Tom Fitzpatrick:  Gold looks likely to post the second bearish outside day in three days, which will materialize if it closes below $1894.45 today. Such a bearish outside day, coupled with the daily momentum rolling over from the overbought territory, suggests gold may have topped out for now for a short term correction lower.

In terms of levels, we are currently trading below the double highs from late Jan 2021 at $1875-$1876, and if gold were to sustain below this range until the close today, the next support range at $1842-$1844, which consists of the 200 day MA converging with a rising trend line support, will be at a danger of being tested in the near future.

Chart of the Day: Gold repeating the January 2021 correction? 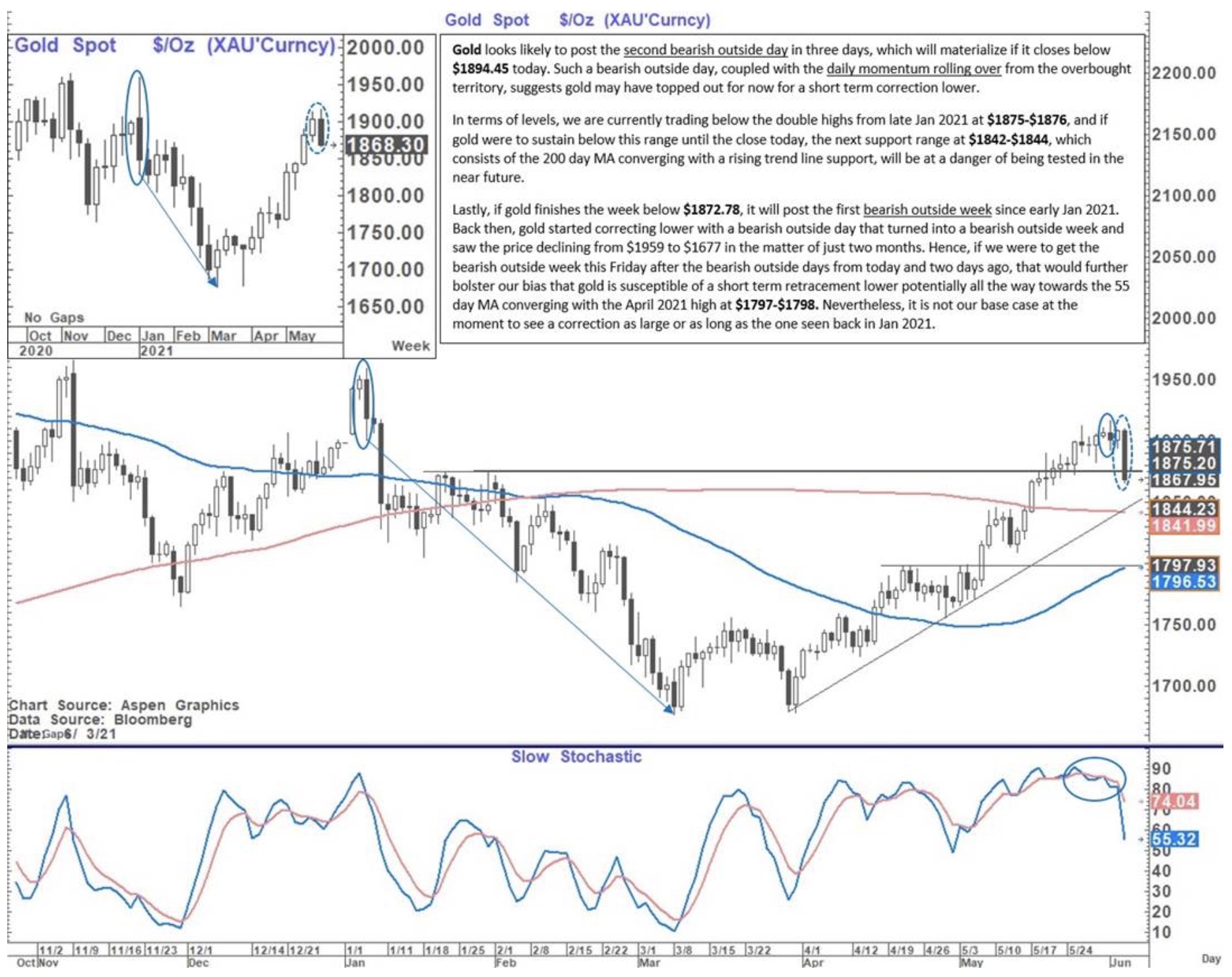 Lastly, if gold finishes the week below $1872.78, it will post the first bearish outside week since early Jan 2021. Back then, gold started correcting lower with a bearish outside day that turned into a bearish outside week and saw the price declining from $1959 to $1677 in the matter of two months. Hence, if we were to get the bearish outside week this Friday after the bearish outside days from today and two days ago, that would further bolster our bias that gold is susceptible of a short term retracement lower potentially all the way towards the 55 day MA converging with the April 2021 high at $1797-$1798. Nevertheless, it is not our base case at the moment to see a correction as large or as long as the one seen back in Jan 2021…

NEW!
To learn which company billionaire Eric Sprott just bought a
$10 million stake in click here or on the image below

Silver
Silver also has a potential bearish outside day that will materialize if it sustains below $27.69 until the close today. It also decisively broke below a rising channel base at $27.83 overnight, which leaves a potential double top neckline at $27.20 at a danger of being tested in the near future. Furthermore, there is a potential bearish outside week on silver that will be completed if it closes below $27.39 this Friday. Such a bearish weekly reversal and the potential double top, if seen, will open up the possibility for an extended decline potentially towards the 200 day MA converging with an interim horizontal support at $25.71-$25.72, which is not too far away from the double top target at $25.6.