Why You Must Own Gold & Silver, Plus This Week’s Biggest Red Flag

This is why you must own gold and silver, plus this week’s biggest red flag.

Why You Must Own Gold
March 15 (King World News) – Egon von Greyerz out of Switzerland:  As the Biden administration adds another $1.9T of “stimulus” debt to an already historically toxic debt pile, the U.S. will be sitting upon over $30T in government debt before Q1 of this year. In order to pay the bills, the Fed MUST suppress rates going forward (especially on the 10Y Treasury, and possibly the 30Y) while simultaneously pursuing a deliberate policy of inflation and currency debasement to “inflate away” some of Uncle Sam’s debt obligations.

An Overnight at the Algonquin
Danielle DiMartino Booth at Quill Intelligence:  While a single room was a mere $2 a night, splurging for three-bedroom accommodations would run you $10. Such was the breakout of tiered hotel pricing when the Algonquin threw its doors open at 59 West 44th Street at its grand opening on November 22, 1902. Originally envisioned as a residential building, what’s credited as New York’s first hotel found short-term guests to be more profitable.

Prior to this innovation in accommodation, one had to be a member of the Harvard or Yale clubs. Dining within walking distance took you to Delmonico’s or Sherry’s. And in 1905, The Hippodrome, purported to be “the world’s largest playhouse” opened directly across the street from the hotel. As per the New York Daily Tribune, “The Algonquin presents in claim for public consideration an unexcelled location, a superb design, modern fireproof construction and a house and table equal to the most fastidious.”

In 1987, the Algonquin was designated a New York City landmark. The property, which has changed hands a number of times was sold to Cornerstone Real Estate Advisors of Hartford, Connecticut, a Mass Mutual subsidiary for $76 million in July 2011. In the heat of the pandemic, the property, managed as part of Marriott’s Autograph Collection, offered rooms at no cost to first responders who worked at nearby hospitals. Thankfully, the worst has come and gone. On March 19th, New York City will allow restaurants to open up to half capacity. And QI will be in the city to celebrate the moment. Finding accommodations, however, has forced a few changes to the pre-pandemic routine.

It’s no surprise that hotels have had a rough go in the last year. We suspect the flip side of that coin will be strengthening pricing power for the survivors once travel sees a fuller recovery. Some of the data are encouraging, if you can call it that. Hotel ADR, or average daily rate, a gauge of the average rate paid per occupied room (red line), has recovered from its April post-pandemic low point of -44.4%, but remains down 21.9%. 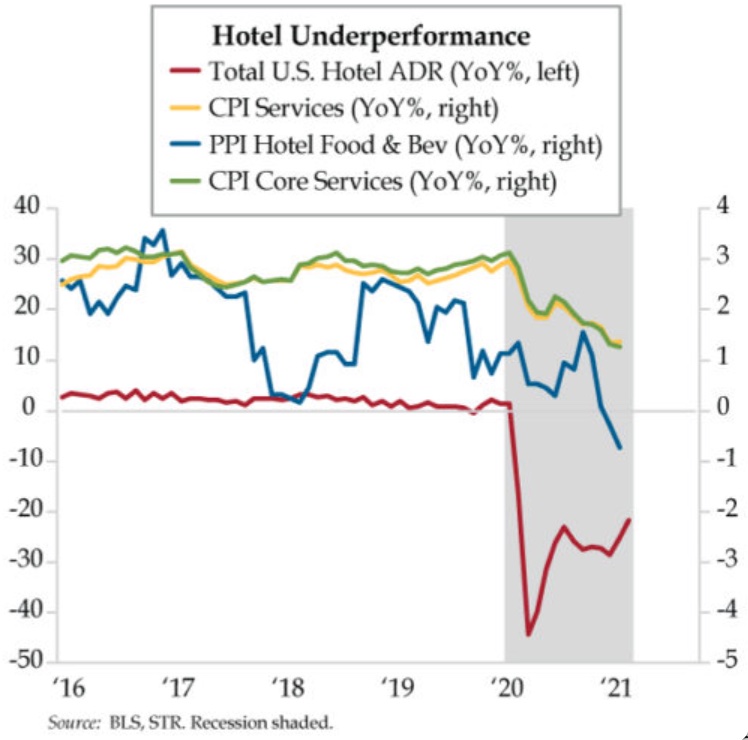 The producer price index for Hotel Food & Beverage (blue line), however, sunk to -0.7% in February, the lowest read and second negative print in five years.

Of course, all services inflation has been hampered as we’ve become less mobile. Both the headline services consumer price index (CPI, yellow line) and the core, which excludes food & energy (green line), hit their post-pandemic lows in January. But that trend may finally be finding its bottom as Spring Break beckons given neither of the measures of price pressures in services fell further in February. The Transportation Security Administration traveler throughput numbers corroborate. While still down 29% vis-à-vis 2020, which itself was down 35% compared to 2019, the last month’s daily traveler numbers of 1,018,489 bury the prior 30 days’ 713,101.

With continued humility as to what the future holds, it’s with good reason that QI friend David Rosenberg’s theory on the future of U.S. spending has gained traction within the investment community. It’s unlikely that many who’ve bought new cars, remodeled bathrooms, refurbished homes, or bought entirely new ones, will continue to consume goods, especially of the home variety, at the same pace after life as we once knew it begins to return.

Expectations that “Prices Won’t Come Down,” as queried by the University of Michigan (UMich, purple line) crashed in the immediate aftermath of the virus taking hold. 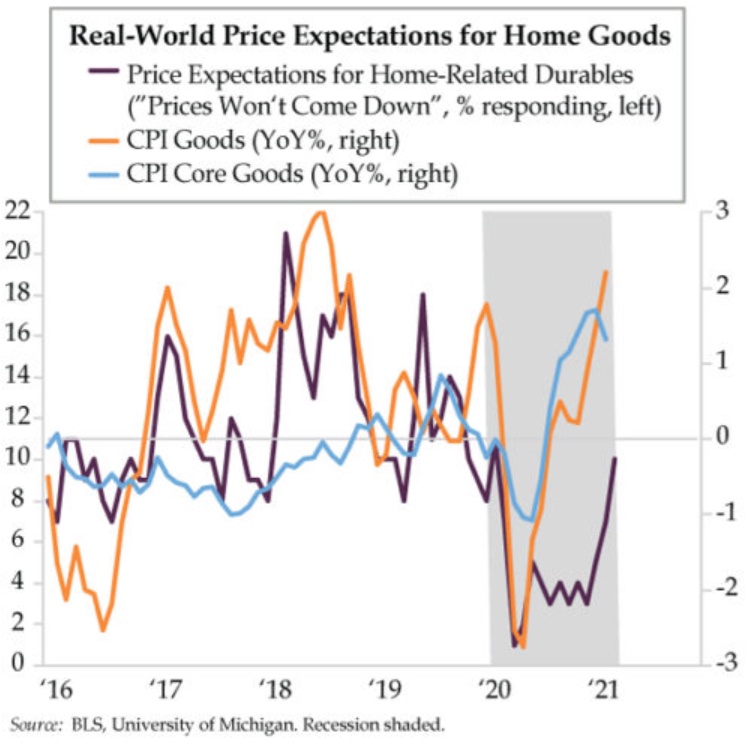 You may recall that a year ago, we were writing about the spiking prices for, and scarcity of, refrigerators, to take but one example. But the latest preliminary reading in March has nearly normalized. And though, at 2.2% year-over-year (YoY), headline goods CPI (orange line) rose to the highest since October 2018, that move was primarily driven by energy prices. Conversely, core goods CPI (light blue line) hooking down to 1.3% YoY marked the first decline in seven months.

The Biggest Red Flag
Perhaps the biggest red flag is what’s not pictured, which we identified in Saturday’s Intelligence Briefing. Via the same UMich data just cited, we learned that necessities prices of 2% are outpacing income expectations of 0.9%. But here’s the kicker, from UMich’s Richard Curtin, “The largest decline was among households with incomes in the top third, with their expected income change falling to 1.5% from last month’s 2.6%.”

That top tier of the income stack accounts for 54% of all U.S. consumer spending. It’s likely that despite last week’s recovery in the stock market, this cohort is getting nervous about risky assets’ gyrations and the steady rise in interest rates.

It’s rarely been this challenging to foresee what’s to come for the spending-driven U.S. economy. We know billions of dollars will hit checking accounts in the coming days and weeks. We know a huge chunk of that will be spent, much of it on the services we’ve been itching to enjoy. And we know a fair amount will be poured into some of the day-traded stocks which re-stock the inventory of financial media headlines on a daily basis. What we don’t know is whether and, if so, to what extent, jittery high-income earners will act as an offset to the spending frenzy in train. If nothing else, we can be assured that after nearly 120 years, the Algonquin is still there to welcome “the most fastidious” travelers.

GOLD BULL: Look At This…

One of the largest undeveloped gold deposits in the world!

Another All-Time Record, Look At What Has Been Skyrocketing! Plus Got Wood?