What is happening with consumers, businesses and households is truly shocking. Many people are wondering, ‘Will things ever return to normal again?

December 8 (King World News) – Danielle DiMartino Booth at Quill Intelligence:  “This is the city, Los Angeles, California… I work here… I’m a cop.” The opening narration in the original 1951–59 Dragnet TV series was succinct and straightforward, very much like its lead character, detective Joe Friday of the LAPD, portrayed by Jack Webb. The one thing Sergeant Friday never uttered was, “Just the facts, ma’am.” In the 1953 episode “The Big Lease,” Friday tells the main suspect, one Mrs. Banner, “All we know are the facts, ma’am.” Satirical writer and performer of that era, Stan Freberg, spoofed the line to: “Just routine, ma’am, we just wanna get the facts.” In 1987, Dan Aykroyd starred as Friday in a big screen remake of Dragnet with Tom Hanks as his partner. The summer hit featured Aykroyd saying, “Just the facts, ma’am.” More than two decades after it wasn’t said, it was emblazoned on the movie poster as the film’s iconic tagline.

In the show’s heyday, people would regularly visit the LAPD asking to speak to Sgt. Friday. The official response given by the front desk: “Sorry, it’s Joe’s day off.” Morph Joe Friday into an economist he’d have likely oft repeated: “Just the hard data, ma’am.” In an extension of yesterday’s commentary, we’re channeling our inner Joe Friday to find hard data on the state of U.S. consumer finances. Most of the comparisons in today’s illustrations are benchmarked to February to assess the post-COVID environment.

Assessing income expectations and wage guidance is key to judging trends in household borrowing. That makes the most recent data point from the Federal Reserve’s October consumer credit report a relevant place to start our consumer finance checkup. The green line tracks the level of total credit card usage, and it has declined in seven of the last eight months from March to October. After the lone gain in September, October registered a relapse pushing the level to cycle lows, putting it not only 11.2% below February’s pre-Coronavirus level but at a more than three year low. 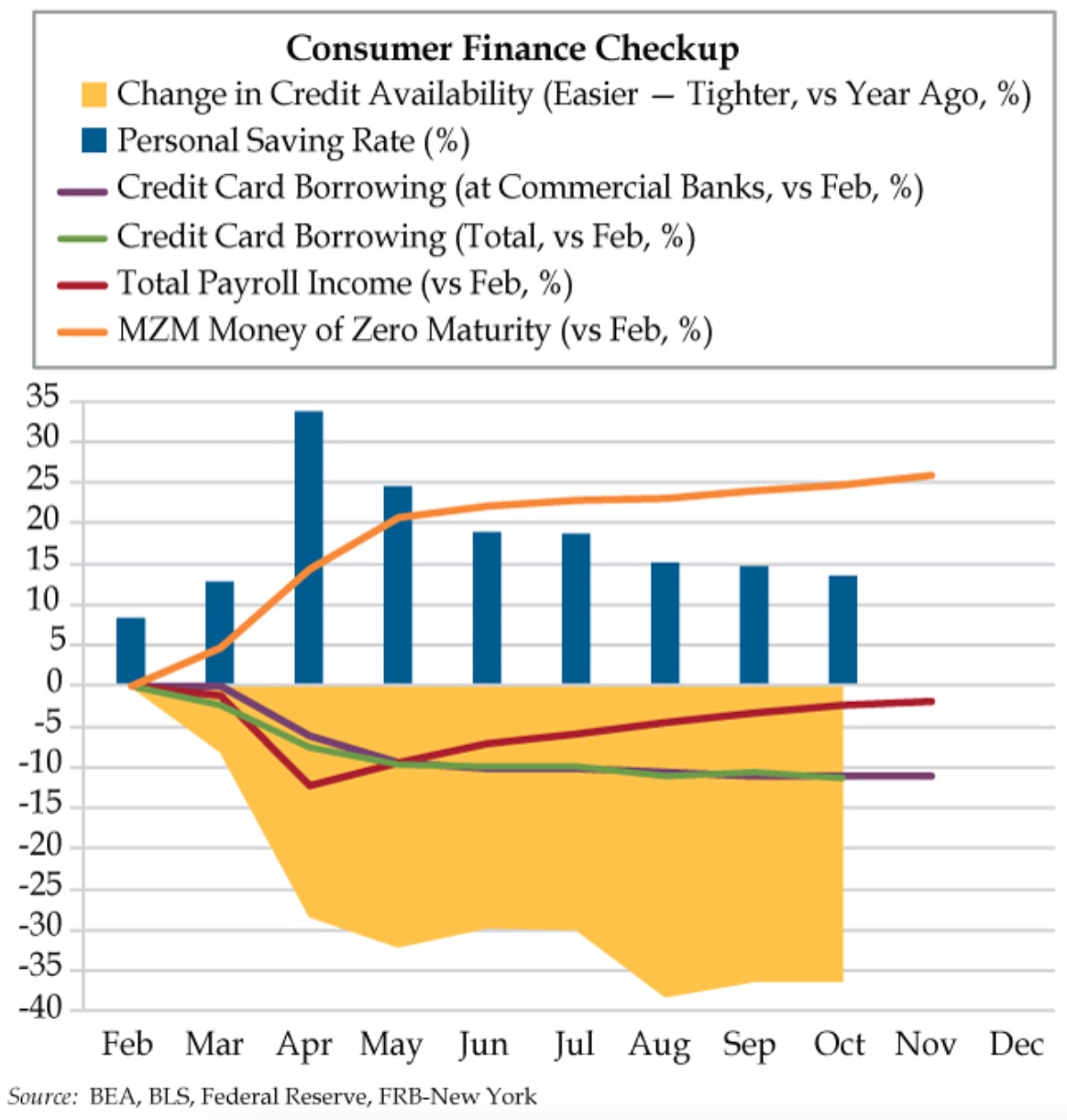 A fresher look at credit card borrowing overlaps nicely with the consumer credit series. The Fed’s weekly report on assets and liabilities of commercial banks is a subset of the total credit card figure and continues to track more than 11% below the pre-pandemic mark (purple line).

For what it’s worth, the November-to-date results through Wednesday, November 25 excluded the Black Friday weekend, the traditional kickoff to the holiday shopping season, and were marginally below October. And from the National Retail Federation, we know that roughly 186 million shoppers purchased something online or in-store from Thanksgiving through Cyber Monday, down from 190 million a year ago. On average, shoppers spent $312, a 14% drop from $362 in 2019.

Staying inside the vault of the Federal Reserve System’s hard data, the New York Fed’s Survey of Consumer Expectations also highlighted credit availability. October echoed a refrain that started in April. At 49.8%, a majority of households said credit was harder to get than it was a year ago. That compares to 36.7% who said credit conditions were on par with that of last year and 13.5% who indicated it was easier to obtain. We illustrated the easier to tighter spread in the yellow shaded area to show how a less favorable climate for consumer credit has evolved since February…

All told, these three series reflect a dearth of credit card activity, the most discretionary of all consumer credit measures. To that end, total payroll income has not fully recovered from the C19 shock. This series — the product of private payrolls, the average workweek and hourly earnings — remained 2.0% below pre-COVID levels through November (red line).

To dissect the persistent weakness in labor income, the right chart breaks down the evolution of the workweek since the first wave of the virus crested. Weekly hours for higher paid managers — the top 20% of all payroll earners — continued to run 0.5% below February’s level (dark gray line), while the workweek for lower paid workers, the bottom 80% of the distribution, stood 1.5% above that point (light blue line). 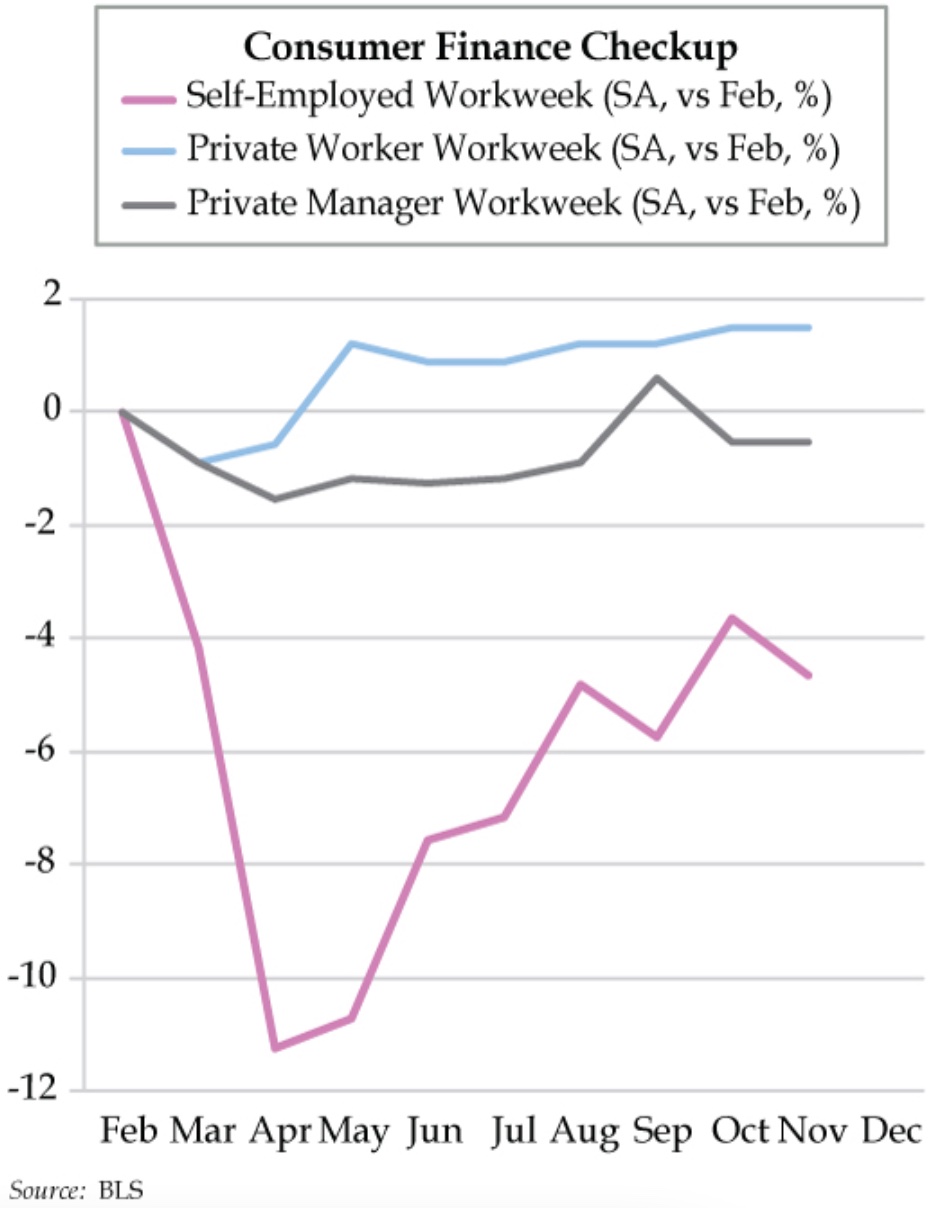 Firms are understandably squeezing every last bit out of their laborers. To get a broader sense of the shock, we included the self-employed who’ve been hit much harder than managers or workers. Uneven improvement in self-employed hours gave way to a fall back in November, leaving this gauge 4.7% under that of February.

Absent a full recovery in aggregate pay, personal savings remain elevated. Still in double-digits, October’s household saving rate (blue bars) was last seen in the mid-1970s. Inflated savings – the difference between current income and outlays – is a mirror image of cautious consumer confidence, which is running 24% and 28% below February’s levels for the University of Michigan’s and Conference Board’s surveys, respectively.

Unrelenting Cash Savings Builds
An unrelenting cash build rounds out our consumer finance checkup. The cash equivalents in the money supply — MZM money of zero maturity — rose to 25.8% above February. While not rising as quickly as in the spring, the slope suggests lingering household cautiousness.

The facts are in. Credit remains depressed, income remains challenged and saving remains high. And, at last check, there will be no $1,200 stimulus check in DC’s relief bill. A stubborn aversion to discretionary spending promises to continue vexing the sell-side narrative.

MAJOR WARNING: “The Seeds Of The Next Financial Crisis” Have Already Been Sown