As we near the end of what will be the last trading week in 2016, markets may be set up for some wild trading on Thursday and Friday.

Today’s note from legend Art Cashin:  “On this day in 1908, there occurred one of the greatest and certainly one of the most disastrous earthquakes in European history. It caused severe damage in much of the Mediterranean area but nowhere quite as harshly as Messina in Sicily.

Actually, even before the earthquake began, it was not a good day for Messina. Beginning the night before, a pelting heavy rain had arrived along with near gale force wind.

Now with the streets already flooded, a predawn tremor stuck Messina. It lasted about ten seconds. A few rocks fell, a few church bells rang spontaneously, a couple of foundations cracked and several statues toppled. Then the second wave hit. It was a whopping 7.5 (even pre-Richter). At its epi-center off shore it raised a tidal wave over 60 feet high (but more on that later).

This shock toppled stone structures all over town, trapping tens of thousands in the rubble and leaving the rest of the citizens in their bed clothes standing in freezing rain. There was no shelter since the public buildings were among the most devastated. The grand Cathedral collapsed. The town hall collapsed. And the wall of the prison collapsed, thus granting an unexpected post-Christmas furlough to 750 of Sicily’s meanest.

Just to prove they were not out of practice they immediately set about looting the corpses; often cutting off fingers to get at the rings. Occasionally they found some people with rings who claimed not to be corpses but they were soon convinced otherwise.

As this merry band worked its way down the hillside, quake survivors fled toward the harbor just in time for the arrival of the aforementioned 60 foot tidal wave. It killed thousands of the ambulatory as well as drowning nearly everyone trapped in the rubble.

Then came the third and largest quake which managed to rupture the gas lines and set the town on fire despite the freezing rain. 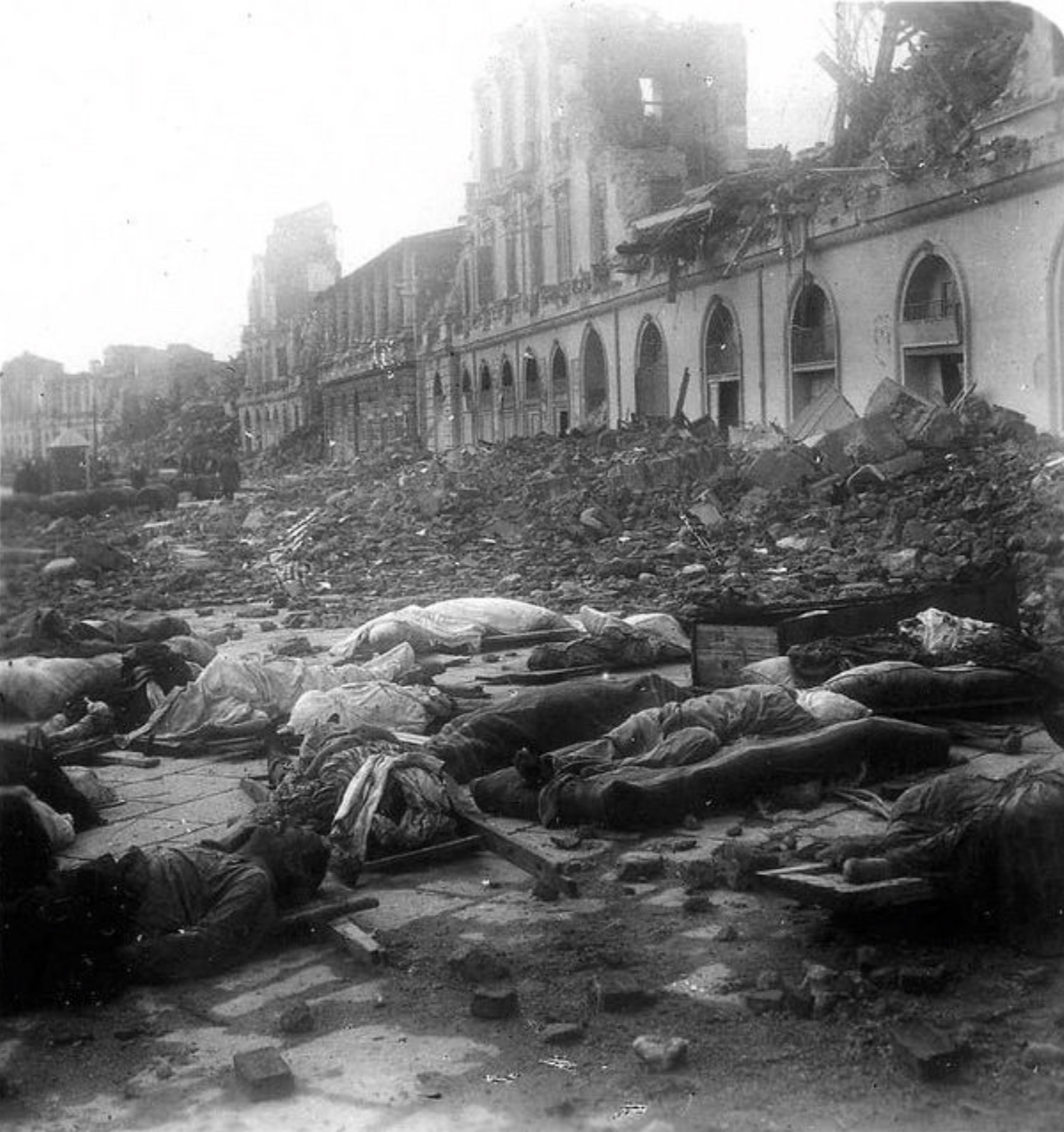 A Staggering 69+% Of Messina’s Inhabitants Were Killed
Order was restored the next day when three Russian warships, on maneuvers in the area, pulled into port to help out. The Russian sailors followed an old custom of civilization called “shooting the looters” which has the uncanny effect of restoring order. When it was over it seemed the quake, the tidal wave, and the looting had killed over 90,000 people in a town of 130,000. So for three decades the people of Sicily referred to Messina as “La Citta Morte” (the city of the dead).

The exchange was not exactly the land of the dead on Tuesday but it might have been declared the land of the motionless as traders needed a cattle prod to move the tape along.

Nasdaq Tiptoes To Record, While Dow Marches In Place – The Dow opened higher and then moved further up in a vacuum for the next 20 minutes. Then prices stalled, as though traders were waiting to see if anybody was going to join the parade.

They milled around indifferently until about 11:00. Then, when no follow-through showed up, some traders canceled bids and stocks drifted a bit lower in decreasing volume.

By 12:30, they had floated down to the levels of the opening tick where they seemed to find some support.

That sense of support seemed to inspire some very mild nibbling among the buy the dip crowd and the resultant, lackluster buying levitated prices slightly.

The minor nibbling continued into late afternoon, floating prices halfway back into the morning rally. The Dow stalled out around 19965 three times between 1:30 and 3:00.

The third failed attempt discouraged some of the bidders and stocks drifted to the day’s lows just before the bell rang.

Again, it was a waste of carfare and a clean shirt with full day volume on the NYSE failing to reach 500 million shares. Friday’s range was a very narrow 28 points. Tuesday’s range was not much broader at 41 points. Advances edged declines by about 3 to 2. Stock up on the No-Doz.

Yearend Pension Rebalance? – Yesterday morning, on CNBC’s “Squawk on the Street” and later on “Closing Bell”, I discussed street speculation that yearend could see some negative pressure on equities as pension funds might have to sell stocks to bring their equity/bond ratio back into line.

In his overnight letter, my friend, Jim Brown, over at Option Investor, discussed the potential influence of a rebalance. Here’s a bit of what he wrote:

The Santa Clause rally is running out of steam. The Santa rally has fallen on its face despite the new record on the Nasdaq today. The Santa rally is the last five trading days of the year and the first two days of next year. Santa may be down but he may not be out. I expected the Dow to tag 20K on Tuesday but it fell 20 points short. There were no Dow components with a change of more than $1 either positive or negative. Apple, Goldman, IBM, United Technology and Caterpillar were the biggest gainers and the keyword there was gainer. The components are continuing to tick up slightly with 21 closing positive for the day. We still have a possibility of hitting 20K on Wednesday but a failure tomorrow should end the possibility for 2016.

The pension fund rebalance for the end of December could see between $38 and $58 billion in equities sold according to Credit Suisse. Stocks have rallied so much since the election the pension funds have to sell stocks and buy bonds to bring their mandatory ratios back into balance. That suggests Thr/Fri should have a negative bias. Normal volume will be very low so that means even $38 billion in fund selling could have a significant impact.

That raises the possibility that Dow 20,000 might turn out to be a “touch and repel” point. What would happen with all those hats?

Overnight And Overseas – In Asia, Hong Kong reopened with a moderate rally. Japan and India were basically flat, while Shanghai saw a mild selloff.

Europe saw a mixed picture. London reopened from the holiday with a rally while markets on the continent were flat to slightly lower.

Crude continues to firm and gold is up a tick or two. The euro is a touch softer and yields are flat.

Consensus – The Sisyphean “assault” on 20,000 may finally yield to the laws of inertia. After today, the road likely gets tougher (yearend rebalance).

CAUTION: This Rising Inflation Can Easily Turn Into Hyperinflation