There is absolutely no question that the metals saw a big breakout this week.

Breakout For Metals
October 15 (King World News) – Alasdair Macleod:  This was the week when the world awoke to soaring energy prices, followed by metals. Copper briefly hit $10,000 per tonne in strong backwardation.

It is hardly a surprise then that the suppression of gold and silver prices began to fail this week. Their prices have eased back a little this morning in European trading, but gold is still up $25 from last Friday’s close at $1784 after touching $1800 yesterday. Silver is up 67 cents over the same time scale at $23.26, having traded as high as $23.58. 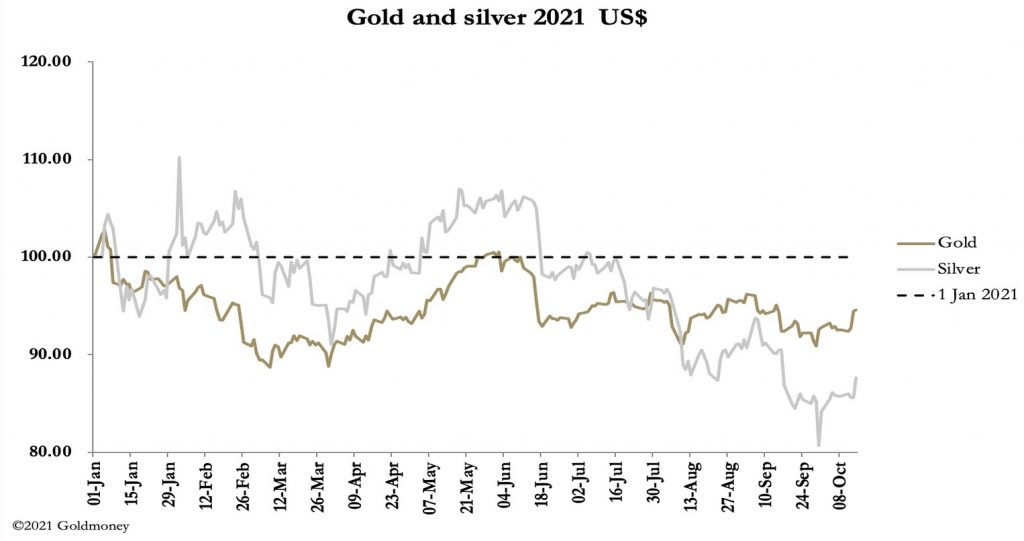 Trading in the Comex gold contract was particularly heavy on the break-out at 313,621 contracts on Wednesday, when open interest increased by 16,433 contracts. The following day a large 2,393 contracts were delivered.

Context is all. It is now 12 weeks before bullion banks on the LBMA will have to conform to the new Basel 3 net stable funding ratio. They have been trying to reduce their paper exposure in the limited time left. While Comex positions have been difficult to reduce and according to the CFTC’s Bank Participation Report bullion bank contracts still represent 73% of Swap positions, positions in London are usually eight to ten times as great. Doubtless, that is where the effort to reduce positions is focussed — out of statistical sight.

Making it doubly difficult for the bullion market establishment is the energy-led commodity crisis. WTI crude is up 10% at $82 since 30 September, gasoline blend-stock up 26%, heating oil up 10.5%. China instructed its electricity producers to stop power outages hampering industrial production and go into the market to buy coal and natural gas at any price. The knock-on effects have yet to add to the chaos and are particularly difficult for producers of basic raw materials which require heavy energy inputs, such as steel, aluminium, and cement.

Energy is the most important of all our commodities, and the effects on wider commodity prices is clear from our next chart, an ETF which we can take as proxy for the energy, commodity, and raw materials complex. 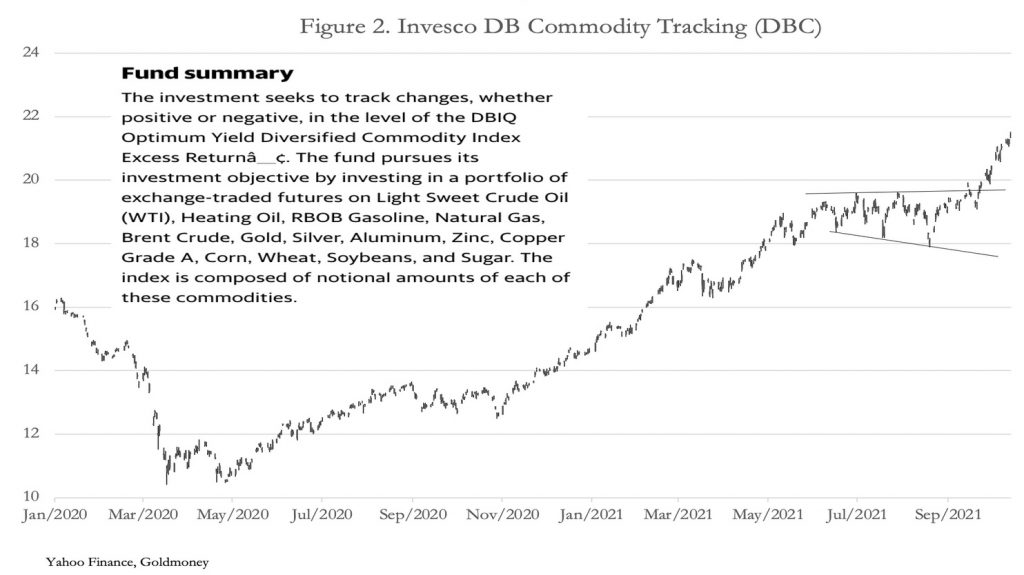 Combining with the logistics crisis, which is interrupting the delivery of essentials to consumers, hopes that the increase in consumer prices is transient are fading rapidly. Fuelling it all is monetary inflation, which in financing government deficits continues apace. Aware of market concerns on this issue, the minutes for the Fed’s FOMC September policy meeting pointed to a possible tapering of the current $120bn monthly QE by $15bn in December, or as early as next month. But the tone of the minutes suggests that the statement was for propaganda purposes rather than a serious possibility.

But since the FOMC meeting prices pressures have increased. The problem for policy makers is that when complacent financial markets wake up and get wind of the true consequences of permanent and increasing price inflation combined with stalling economic performance, the Fed will need to increase QE to prevent bond yields rising and undermining its cherished wealth effect from rising stock markets.

THE DEEP STATE: First The Ashes, Then The Phoenix