We have now clearly entered a period of stagflation. The last time this happened there was a gold and silver bull market stampede. 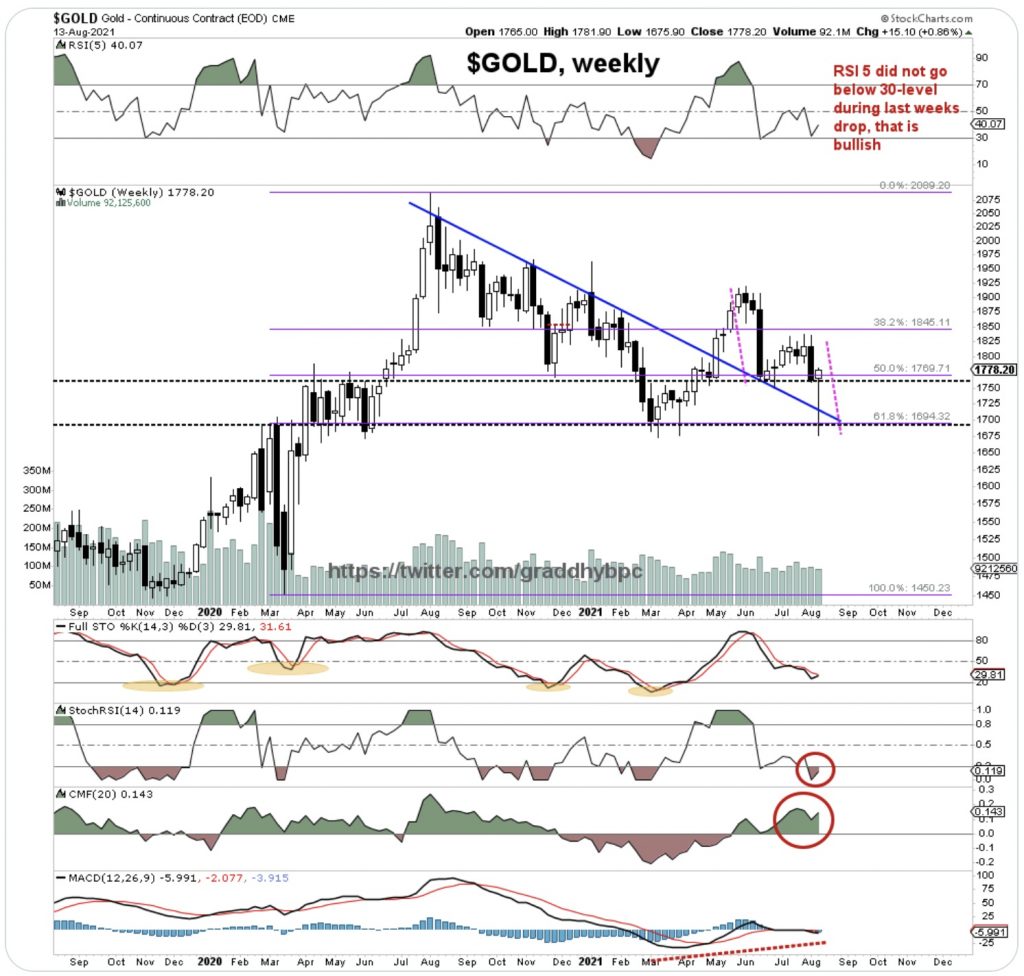 Stagflation And Worries Over Inflation
Peter Boockvar:  What was so disappointing about the 10 year low in Friday’s August UoM consumer confidence and 10 year high in longer term inflation expectations was how broad it was. Said the UoM:

“The losses in early August were widespread across income, age, and education subgroups and observed across all regions. Moreover, the loses covered all aspects of the economy, from personal finances to prospects for the economy, including inflation and unemployment.”

Worries about Delta and inflation were all over the answers to the questions.

As for the latter, “Reactions to market prices on these purchases were the most negative ever recorded in the long history of the surveys.” Purchase intentions for homes, vehicles and household durables “all were the lowest since the 1980 recessions.” And the reaction wasn’t just from lower income people who can least afford inflation, “This distaste was the greatest among households with incomes in the top third, who represent over half of all consumer purchases.”

So, we now have more evidence of stag because of the worries over flation. I break that word up here because does the Fed respond to the former or the latter because of their main focus on employment or will they understand that unless they control the latter, the former will only get worse? We get to read the minutes on Wednesday of the FOMC meeting from three weeks ago but it certainly is sounding like from a variety of members that we are getting really close to the beginning of the tempering of asset purchases which will throw a whole new curve ball into the investing landscape…

I hear the claim from some that tapering is no big deal because the Fed will still be adding to its balance sheet. The analogy though I give in response is that while a lot of air will still be going into the QE balloon, less air means the balloon starts to contract. That is why markets have always had a negative response to Fed tapering.

Stagflation: Gold & Silver Bull Market Stampede
King World News note:  The stagflation of the 1970s was the backdrop for the gold market surging over 25X and silver soaring 38 times in price. Even though there are many, many other catalysts, there is really nothing left to say about how incredibly bullish this environment is for the gold and silver markets long term.

Maple Gold Mines Ltd. (TSXV: MGM) (OTCQB: MGMLF) (FSE: M3G) (“Maple Gold” or the “Company“) is pleased to release preliminary 3D modelling results from Phase II of a three-phase review of historical drill data at the past-producing, high-grade Telbel underground mine (“Telbel”) at the Joutel Gold Project (“Joutel”) in Quebec, Canada. Joutel is held by a 50-50 joint venture (“JV”) between the Company and Agnico Eagle Mines Limited (“Agnico”). The Phase II work program (see news from May 10, 2021) involved further data verification and analysis of approximately 250,000 metres (“m”) of historical drill results and the construction of a new 3D model for drill targeting.

“The results from this major data review and 3D modelling effort by the JV demonstrate the size and grade potential of gold mineralization that remains in the vicinity of the historical Telbel Mine,” stated Matthew Hornor, President and CEO of Maple Gold. “The next phase of work will be to fully utilize the 3D model to better interpret the geological environment and to establish and permit high-priority drill targets as we progress toward a maiden drill program. The Company is maximizing this opportunity to explore a significant Canadian gold mining camp with strong future potential using modern tools and technology and we look forward to working alongside our JV partners to unlock its full value.”

Fred Speidel, VP Exploration of Maple Gold, commented: “Our recent 3D modelling work indicates that the principal mineralized zones in the Telbel Mine area are distributed along three distinct trends or plunges, which remain open both up and down plunge. Furthermore, certain plunge intersections occur in areas that have seen little to no previous drilling. We have also identified new target areas beyond the mined-out stopes as well as two sub-parallel target trends both north and south of the main Telbel Mine horizon with high-grade gold intercepts that were not followed up on historically. These initial model results provide encouragement for potential extensions to the past-producing mine area, which we are excited to test in upcoming drill programs.”

Phase III of the Telbel digitization program is now underway to define infill and step-out drill targets designed to follow up on shallow, high-grade intersections above the mined-out areas of the Telbel deposit and to confirm the continuity of the mineralized structures at Telbel. Completion of the Phase III priority drill targeting and permitting work is expected in Q3/2021.

One Of The Greats Just Put Out A Note On Gold