The early morning saw volatile trading in the gold and silver markets, plus more monetary madness impacting the real world.

Silver
August 4 (King World News) – Ole Hansen, Head of Commodity Strategy at Saxo Bank:  Silver’s recovery from the late July slump has paused after reaching the 200-day moving average at $25.91. Looking for a break below 70 on XAUXAG (the Gold/Silver ratio) to trigger some additional sparkle (see chart below). 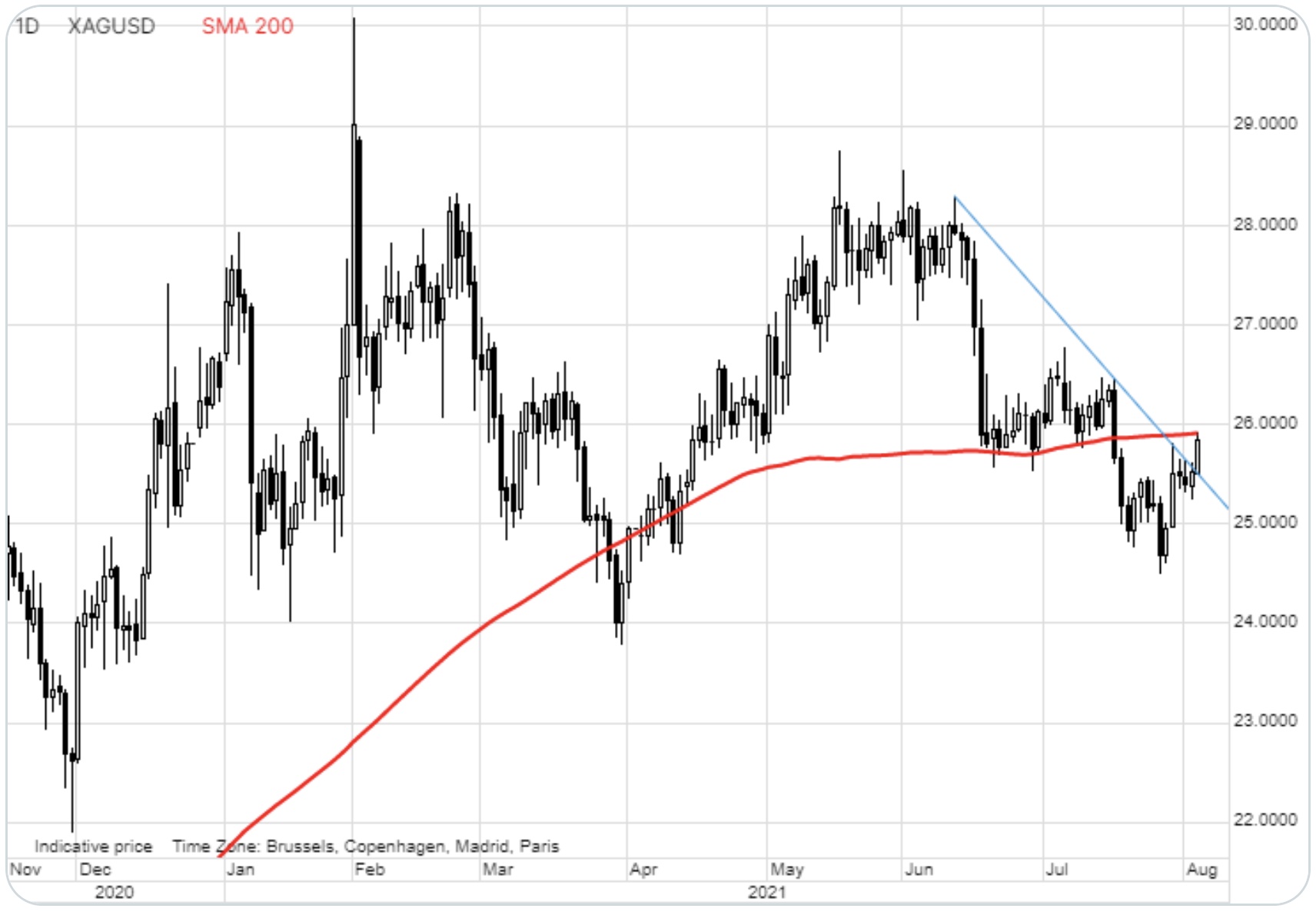 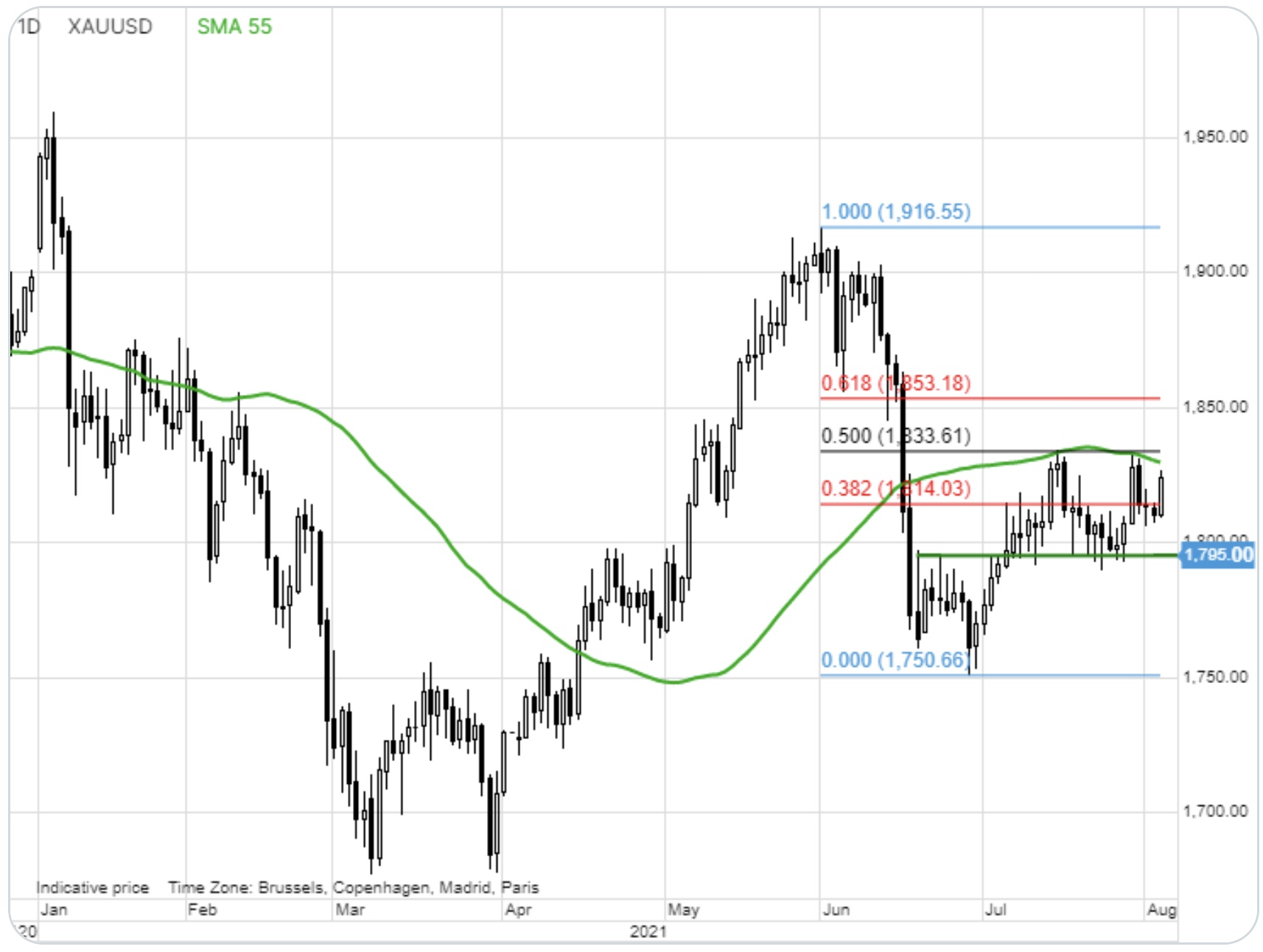 GOLD BULL CATALYST: More Inflation In The Form Of Rising Rents
Peter Boockvar:  I’ve argued before and will again, any give back in the pace of price increases on the goods side (used car prices will see a slower increase of rapid gains but other industries will continue to raise prices) will be offset by the rise in rents. Last week the Apartment List National Rent Report for July came out and they saw a 2.5% m/o/m increase…

“continuing a month’s long trend of rapidly accelerating rent growth. So far in 2021, the national median rent has increased by a staggering 11.4%. To put that in context, in the pre-pandemic years from 2017-2019, rent growth from January to July averaged just 3.3%. This month’s spike continues to push rents well above where they would be if growth had remained on its pre-pandemic trend.” 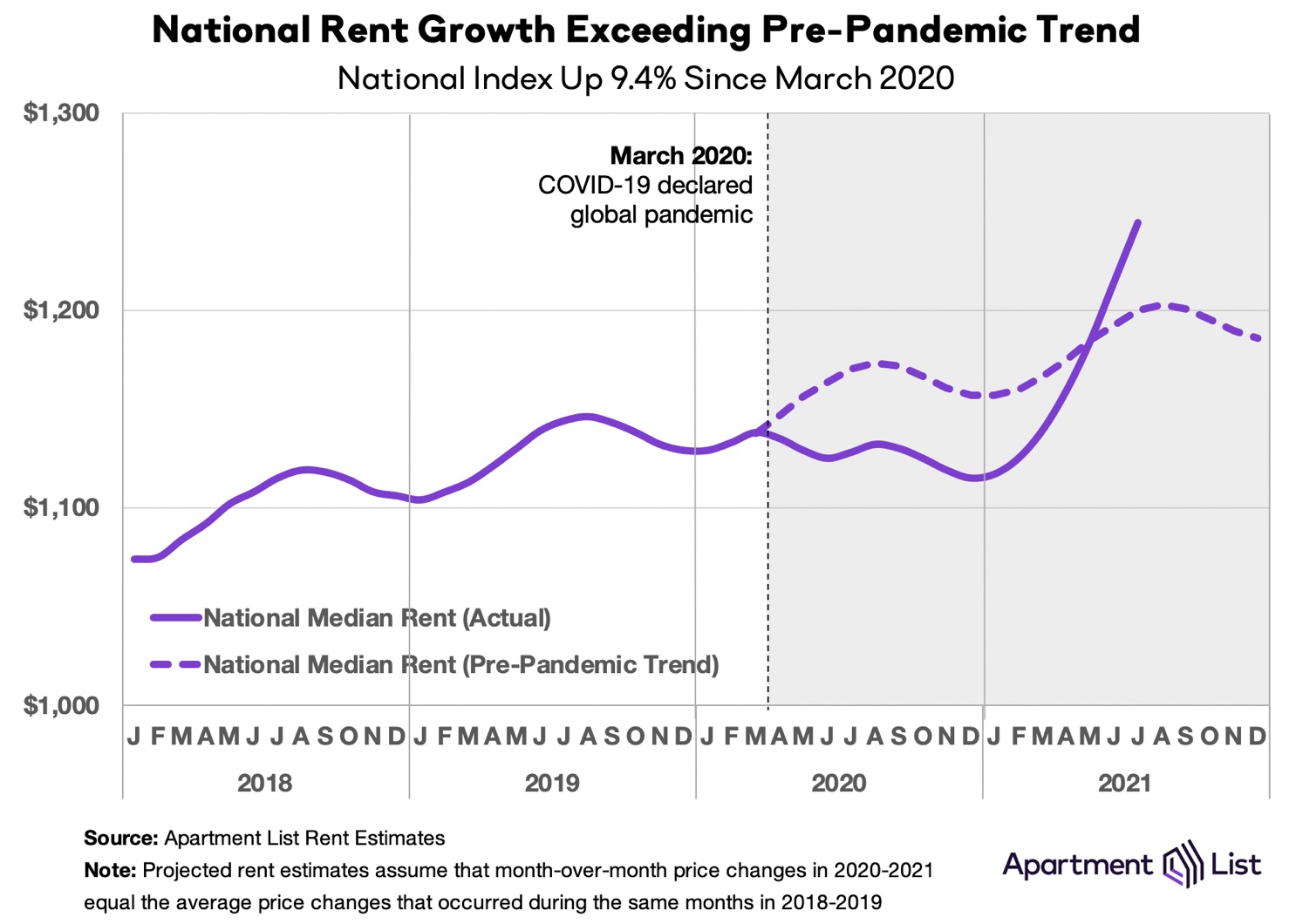 The cities that lagged, like San Francisco and NYC, are seeing sharp snap backs and other cities continue to have rapid rental gains led by Boise, Idaho where rents are up 39% since the start of the pandemic. 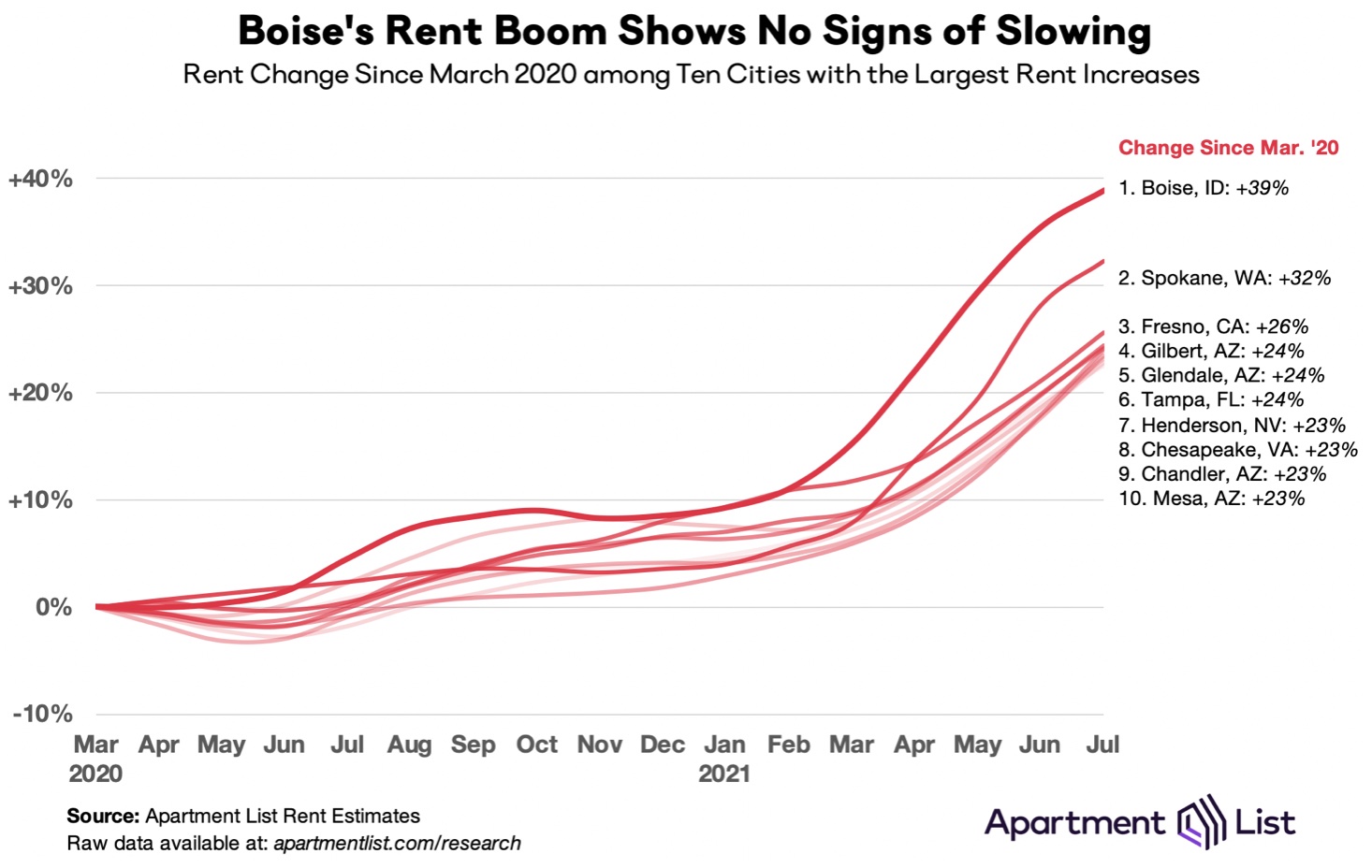 Keep in mind, the CPI and PCE stats seen over the past few months are showing .2-.3% m/o/m gains. There is nothing temporary here and further squeezes household budgets which in turn leads to slower economic growth.

30 Year Mortgage Rates Back Under 3%
The MBA said the average 30 yr mortgage rate slipped back under 3% at 2.97% but mortgage applications were still lower. Purchase apps fell 1.7% w/o/w and that is now down for the 5th week in the past 6 and lower by 18% y/o/y. The lack of supply and excessive price gains have slowed the pace of transactions as we all know by now. Refi’s were also weaker by 1.7% w/o/w but after an 11.2% rise last week and the y/o/y change is down 3.2% on tough comps.

ADP said only 330k private sector jobs were added in July, well below the estimate of 690k and that compares with 680k in June (revised down by 12k). All three sized businesses (small, medium and large) added jobs but overall the services side added 318k, about half the pace seen in June of 624k and 785k in May. The goods side hired a net 12k vs 56k last month and vs 97k in the month before.

ADP attributed the miss to this: “Bottlenecks in hiring continue to hold back stronger gains, particularly in light of new Covid concerns tied to viral variants.” They remain optimistic though as “These barriers should ebb in coming months, with stronger monthly gains ahead as a result.” That is there way of saying we’ll see what happens when the added unemployment benefits expire and kids go back to school.

ANOTHER GOLD & SILVER BULL CATALYST: Stagflation
Bottom line, I really don’t like to use the word ‘stagflation’ but we have a form of it now unfortunately which will make the job of the Federal Reserve even that much more difficult. After losing 19.6mm jobs in March and April last year, we’ve since added back 13.1mm. Treasury yields are at the lows of the morning, the dollar is weaker and the precious metals are higher.

Legendary ex-Goldcorp, Randgold and GT Gold Mine Finder Joins Under the Radar Explorer in Fiji!
Today, Kalo Gold added one of the world’s great mine finders, Paul Harbidge, former SVP Exploration of Goldcorp (sold to Newmont for US$10 billion in 2019) and President and CEO of GT Gold (sold to Newmont for US$311m in 2021) to its team. Before Goldcorp, Mr Harbidge was at Randgold with +7.5 million ounces of discoveries to his credit before it was acquired by Barrick (for US$6.5b in 2018). Paul was attracted to Kalo’s “phenomenal geologic setting, large land position, big system and multiple discovery potential, and the team”. He later added that he believes “Kalo is on the verge of a significant discovery.”

Kalo Gold owns the high grade 100% owned, large 360 km2 Vatu Aurum Project in the prolific Ring of Fire in Fiji. Recent geophysical results have shown that Kalo’s Qiriyaga Hill Deposit is only just the tip of the iceberg of something very big and also surrounded by multiple large, previously unknown and highly prospective targets. Incredibly, the geophysical results show that historical drilling just missed it in some cases by a few feet – making this a major opportunity for Kalo and its investors! Kalo Gold recently went public and trades under the symbol KALO in Canada and KLGDF in the US.