Silver is on the cusp of a massive breakout and the next two weeks could be spectacular for gold, silver and mining stocks, but there is something else happening that is very important.

December 17 (King World News) – James Turk:  The precious metals have been making good upside progress, Eric. They have not yet broken out to the upside to confirm that major overhead resistance has dissipated and been overcome, but we are close. The breakout might happen today or tomorrow.

I like to say that the market tells us its own story, and we just have to watch and listen to what it is saying. It is an investment principle I learned from a family friend when I first started to work on Wall Street back in the 1960s…

I know from my own experience that this principle has guided me well, but despite sounding so simple and straightforward, it can be difficult to follow at times. Emotions get in the way, and cloud what the market – or rather, the markets are saying because there are so many of them saying the same thing at the moment. The dollar is toast.

In fact, all fiat currencies are collapsing against assets not denominated in those currencies. So commodities, stocks, houses, Bitcoin, you name it – are rising in price. Avoid bonds, bank accounts and government debt.

Sometimes you have to listen to what the markets are saying even though you don’t know the reason for what they are doing. That’s why traders like to rely on the old adage that “the trend is your friend.” To make money trading, you really don’t need to know why prices are rising or falling. You just need to ride with the trend.

Fortunately, it seems pretty clear that we have a reason asset prices are rising. Money printing is going wild, which was confirmed yesterday by the Federal Reserve that it is going to continue buying bonds, which means that more dollars are being created. That means inflation, and that is what the markets are clearing telling us with their rising prices.

It also means that gold and silver are getting ready to rocket higher. Look at this chart of Comex March silver.

Silver On The Cusp Of A Massive Breakout! 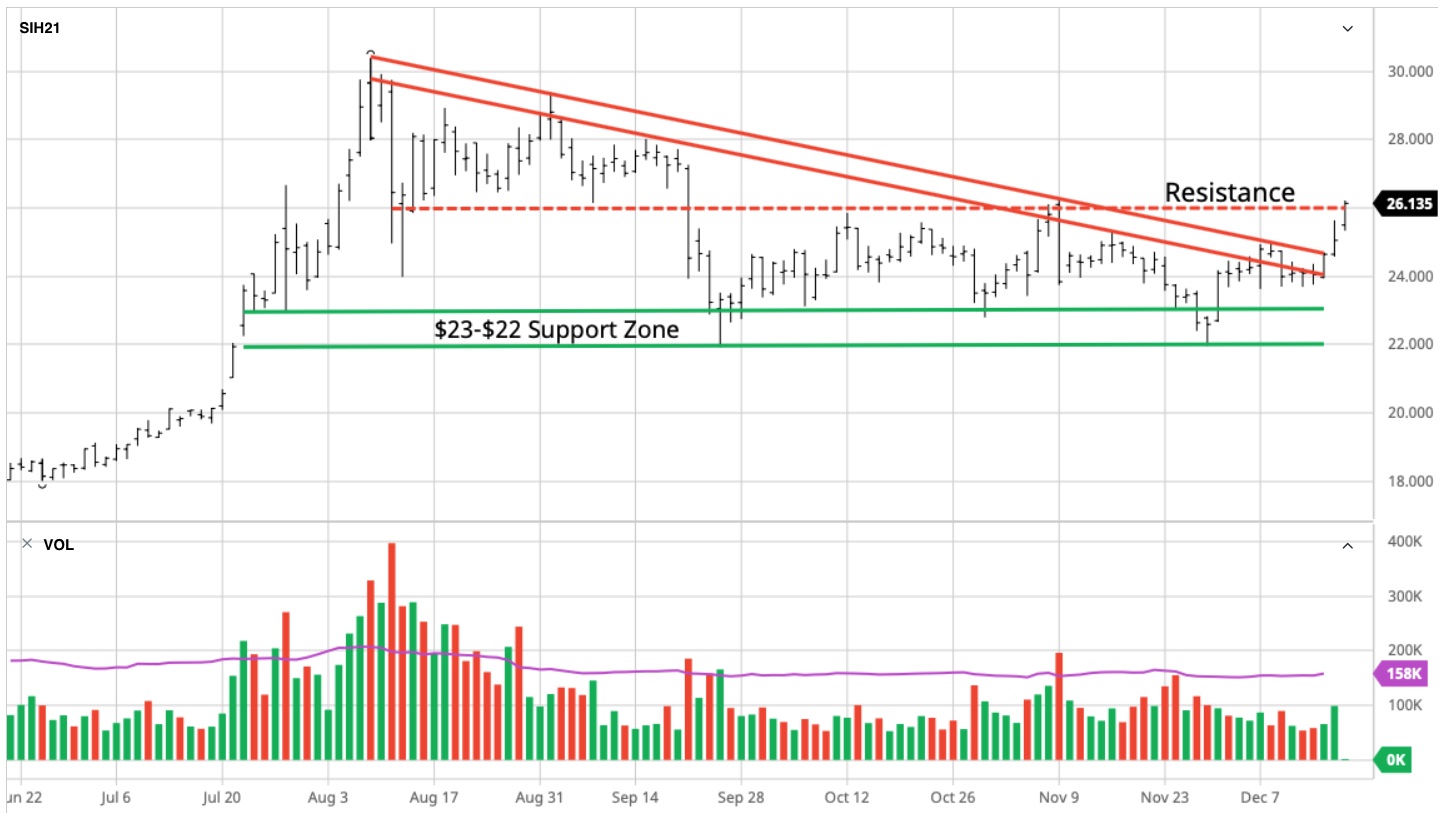 Silver is like a race horse that can’t wait for the starting gate to open, which will happen when it hurdles $26. The race will really be underway when silver rounds the first corner by hurdling $30.

There Is Something Else Happening That
Is Very Important Here….

Ivan Bebek:  “I am not old enough to remember the 1970s gold and silver mania, but my father told me:

“It was the craziest thing I have ever seen. That is what is coming once again. It won’t even matter what you own in the space, it will all be going higher, just like the Dot-Com mania.”

For what it’s worth, my father now owns well over a million shares of my company. These are all shares that he purchased in the open market. He told me the reason he bought so much of my company’s stock is:

“I believe this company can be one of the top performers in the coming mania, and I want to be well-positioned to take advantage of what I witnessed in the late 1970s mania.”

Apart from my father, I have never been part of a better positioned gold company in my 22 years of being in this business as a shareholder or an executive. Discovery is the most rewarding investment return that a gold company can offer its shareholders, and we see major discovery opportunities across all 4 or our assets which, will be drilled continuously through 2021.

We have just started our first 50,000 meters of a 100,000 meter drill program in attempt to make our high-grade deposits much bigger and find some of the largest gold mines globally in Canada.  We are currently drilling in the one of the best regions in the world to find gold — the James Bay Region of Quebec. The results from this program will provide us with the most important catalysts relative to our share price performance, which we anticipate will be very exciting drill results for the next 24 months.

The Coming Mania
Like my father said, Fury shareholders will be well-positioned to benefit from the upcoming mania. We will see 24 months of steady gold growth opportunities across our 4 assets as well as major discovery swings that we will be taking monthly as we enter the mania stage of the gold bull market. Fury Gold, symbol FURY in Canada and the US.