Here is an important update on the gold market, plus a fascinating look at real estate that will shock people.

Gold
November 16 (King World News) – Ole Hansen, Head of Commodity Strategy at Saxo Bank:  Continued reductions in bullion-backed ETF holdings since June slowed to 80k oz last week when XAU rallied +5%. With most of the futures short covering now done, a pick up in demand for ETFs is the missing key that could unlock additional gains above $1803 resistance.

More Physical Demand Is Necessary For Gold To Break Out Solidly Above $1,800 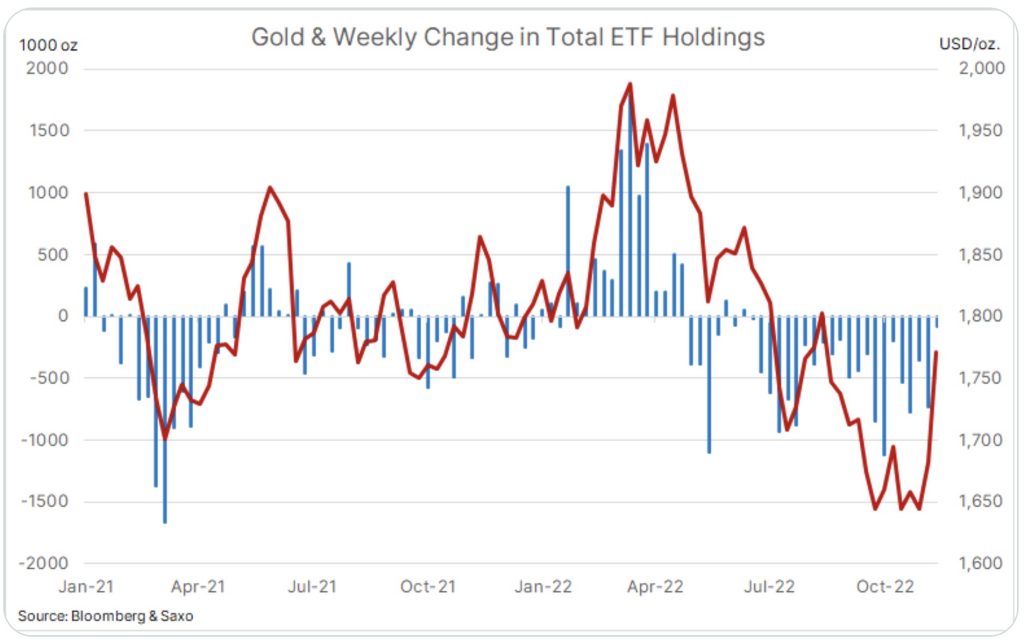 More gold news below, but first…

This Is A Collapse
Peter Boockvar:  The November NAHB home builder survey deteriorated further, falling to 33 from 38 and 3 pts below the estimate. This index has fallen every single month this year, is down by 36 pts over the past 6 months and is just 3 pts from matching the Covid low. 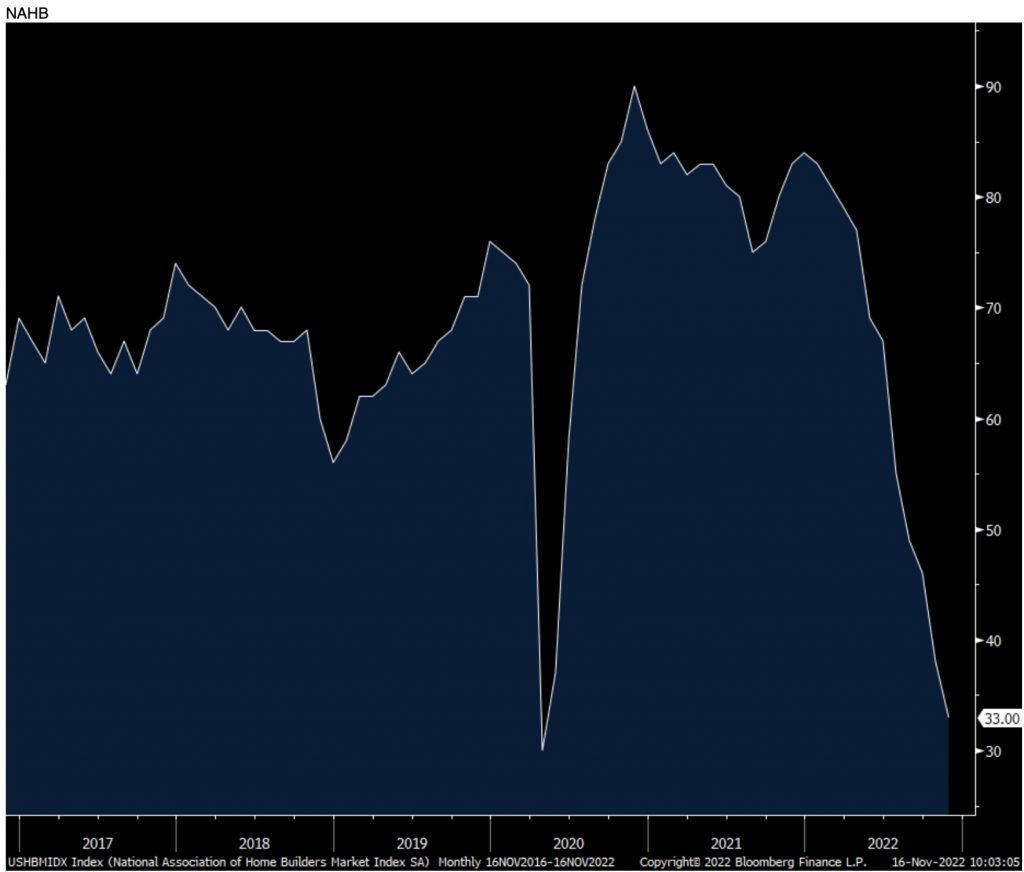 Present conditions fell 6 pts m/o/m to 39 and the Future outlook was lower by 4 pts to 31. Prospective Buyers Traffic dropped another 5 pts to just 20 vs the Covid low of 13 and compares with the 71 level it stood as we entered 2022. 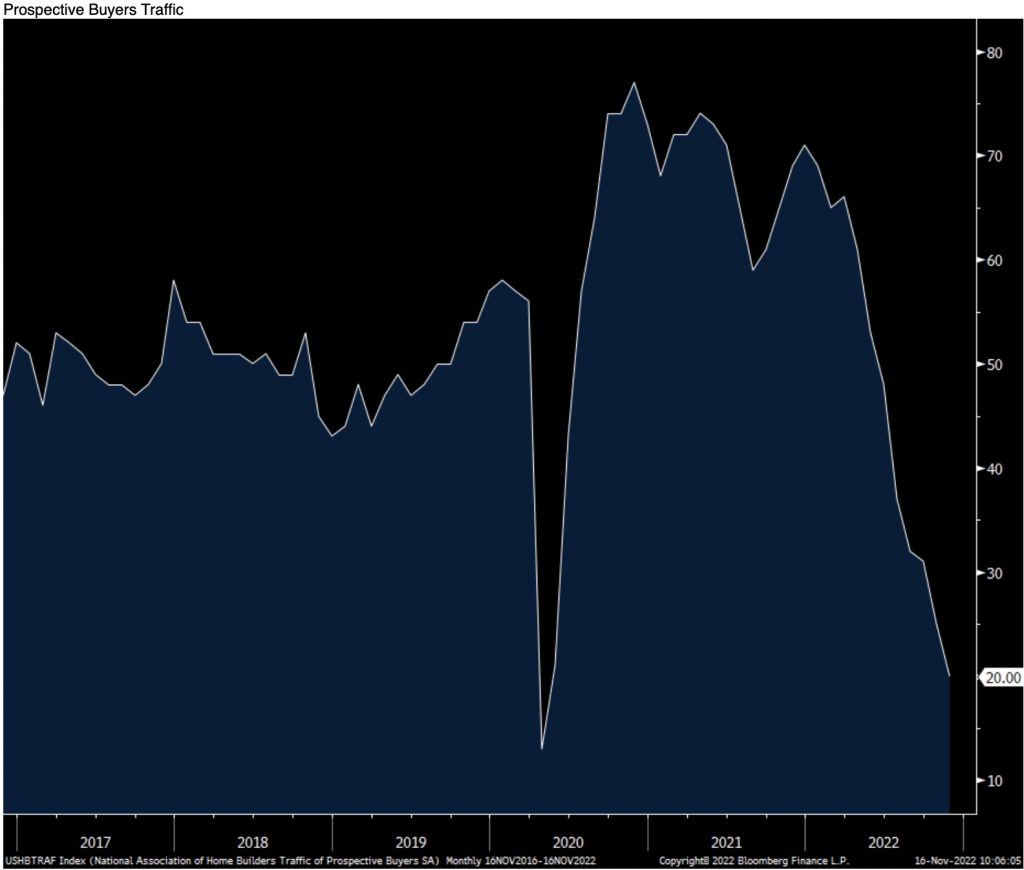 We’re now at the point of such faltering demand that the incentive push is really picking up. The NAHB said:

“To bring more buyers into the marketplace, 59% of the builders report using incentives, with a big increase in usage from September to November. For example, in November, 25% of builders say they are paying points for buyers, up from 13% in September. Mortgage rate buy-downs rose from 19% to 27% over the same time frame. And 37% of builders cut prices in November, up from 26% in September, with an average price of reduction of 6%.”

Extending the problem for builders is the squeeze on profit margins:

“Even as home prices moderate, building costs, labor and materials – particularly for concrete – have yet to follow.”

As I said the other day, this is one of the risks for many companies in other industries that have been solely relying on inflation in driving sales, rather than volumes. The profit margin squeeze will continue…

Homeowners Are Staying In Place
King World News note:  Here are some fascinating snippets from an excellent report by CNBC’s Diana Olick:  “All we can do at this point is repeat what our customers are telling us,” McPhail said. “There is a dynamic we don’t see much in the market. With rising mortgage rates, homeowners are staying in place.”

By the end of the first quarter of this year, before the steep runup in mortgage rates caused the housing market to falter, homeowners had a collective $11 trillion dollars in so-called tappable equity, according to Black Knight. That is the amount a borrower can take out of their home while still leaving 20% equity in it. That equity grew by an unprecedented $1.2 trillion in the first quarter of this year alone. Per homeowner, it amounts to roughly $207,000 in tappable equity.

People Don’t Want To Sell Their Home
[NAHB’s Chief Economist, Robert] Dietz  also points to the “interest rate lock-in effects,” meaning people don’t want to sell a home where they might be paying a 2.75% mortgage interest rate and trade up to another home where the rate would likely be around 7% today.

More Than Half Of Homeowners Don’t Plan To Sell For At Least 20 Years
“Additionally, more than half of the homeowners we surveyed have no intention of selling or moving out of their current residences in the next 20 years or ever,” said Marine Sargsyan, Houzz staff economist.

The Right Deal at the Right Time
Zacatecas acquired the Esperanza Gold Project via a transaction with the well known and extremely successful Canadian mining company, Alamos Gold. Through the transaction, Alamos has become the largest shareholder of Zacatecas and joined a notable list of previously announced investors in the company such as industry legend and billionaire, Eric Sprott. Insider purchasing has also been steady over the past several months with Zacatecas CEO Bryan Slusarchuk regularly purchasing shares in the open market as well as investing in the last financing which raised more than C $19 million at C $1.10 per unit. Slusarchuk and the great team he works with is no stranger to buying assets when the precious metals space is unloved. Prior to the acquisition of Esperanza, he was co-founder and former President of gold producer K92 Mining which acquired the Kainantu Gold Mine from Barrick Gold in what was perhaps one of the best and most lucrative industry transactions by a small company in recent memory.

Some of the World’s Best Mining Investors Betting on Zacatecas
The world of mining is a high risk and high reward universe. The last financing conducted by Zacatecas was done at a big premium to where you can buy shares today. That financing was oversubscribed with strong demand from specialist precious metals investors and included investments from the likes of Zacatecas CEO Bryan Slusarchuk, Director John Lewins and Director Charles Hethey. With more attention now on the gold space, Zacatecas is attracting attention as they rapidly check the boxes at Esperanza, advancing it towards production. Zacatecas Silver, symbol ZAC in Canada and ZCTSF in the US.