On the heels of the Dow plunging more than 800 points, look at the shocking comparisons between 1968 vs today.

2020 vs. 1968: This Too Shall Pass
October 26 (King World News) – Whitney George, Chief Investment Officer at Sprott Asset Management:  2020 has been a challenging year. With the COVID-19 pandemic, increased social unrest, fires engulfing the West coast, a record number of hurricanes exhausting the naming alphabet, and high tensions surrounding the upcoming U.S. presidential election, 2020 will go down as an exceedingly nerve-racking year.

However, looking back in history, 2020 isn’t so unique.

With gratitude for a career on Wall Street that has spanned more than 40 years, I have experienced plenty of history. Looking back for an analog to this past year, in many ways, 1968 was a year on par with 2020. It’s worth pointing out several of the major historical events that occurred in 1968. 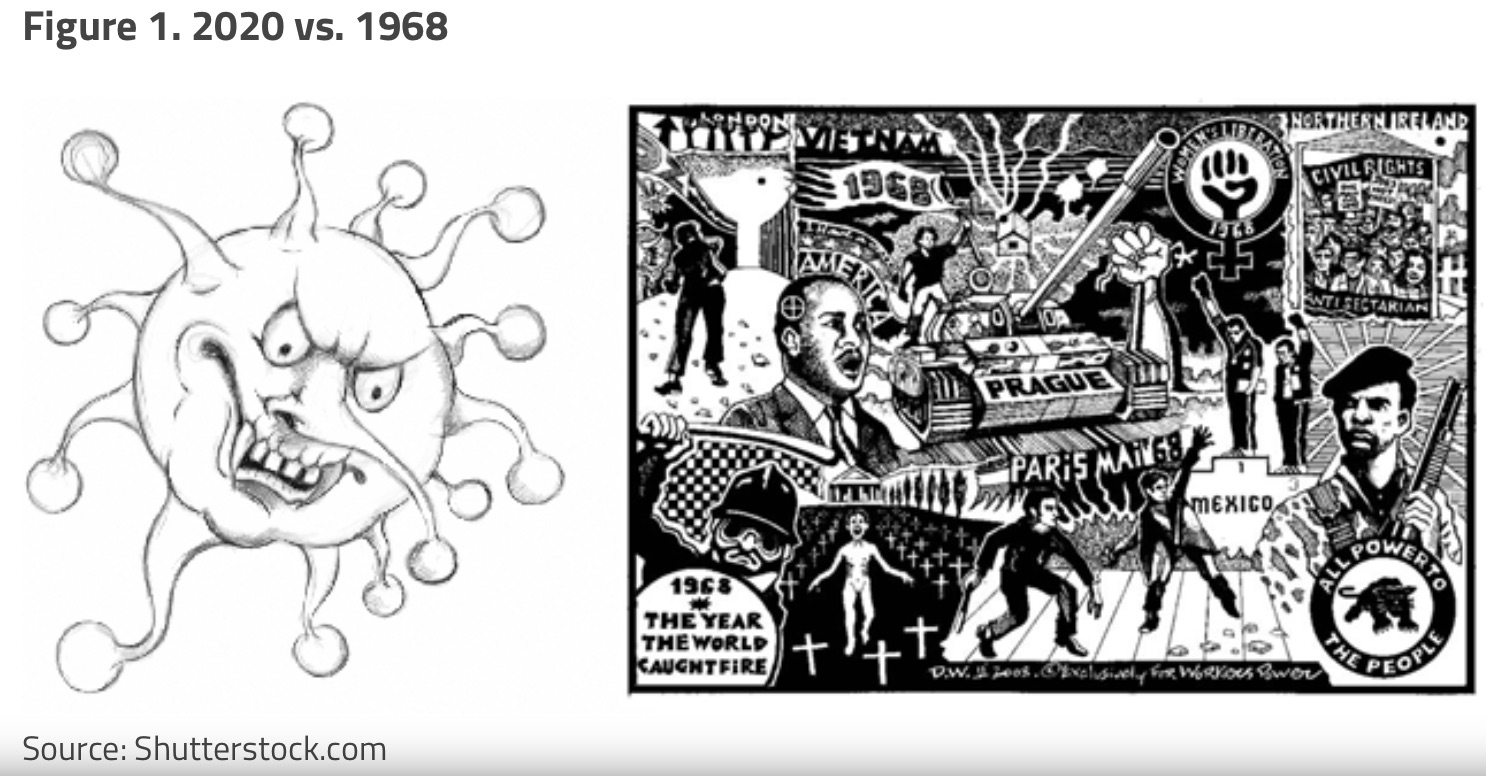 1968: The Year the World Caught Fire
The Tet Offensive, which suddenly raised U.S. awareness of the Vietnam War, kicked off the year (the war would not end for another seven years). Unrest plagued Czechoslovakia, which tried to break away from the Soviet Union only to have it intervene and re-impose a Stalinist regime, ending the “Prague Spring.” North Korea seized one of our naval surveillance ships, the Pueblo, and imprisoned 83 U.S. sailors in a concentration camp; this was 15 years after the Korean War had ended. 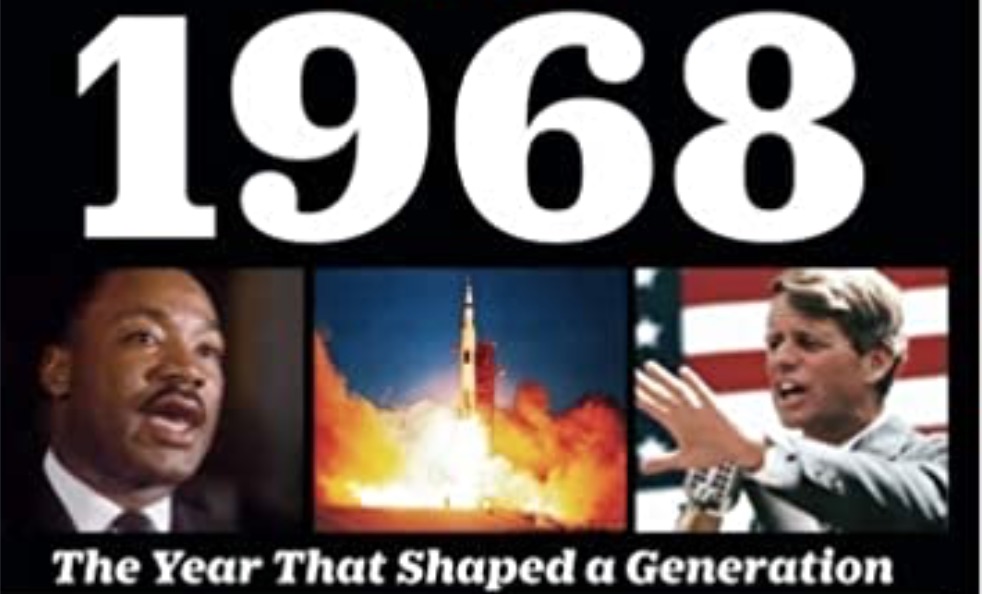 On April 4, Martin Luther King, Jr. was assassinated, leading to social unrest and protests exceeding those today in their fury. In the spring, student anti-war protests erupted around the world. On June 5, Robert Kennedy was assassinated as he campaigned for the U.S. presidency. In late August, thousands of students, antiwar activists and other demonstrators poured into Chicago and disrupted the Democratic National Convention, which resulted in the nomination of VP Hubert Humphrey. Athletes at the Mexico Olympics protested on the award stand, raising their fists in support of “Black Power” during the playing of The Star Spangled Banner. There was also a highly volatile election season, which eventually led to Richard Nixon’s presidency. And to cinch the comparison with 2020, a virus spread across the globe in 1968 (the “Hong Kong” flu), ultimately causing the death of 100,000 people in the U.S…

“Sock it to me!”
There was also good news in 1968. Apollo 8 was the first human spaceflight to successfully orbit the moon. Launched on December 21, the astronauts returned to earth on December 27. The crew orbited the moon ten times, and at the time, their Christmas Eve TV broadcast was the most-watched TV program ever. Contrast that to today, when we now measure “eyeball” success through numbers of Tweets, Instagram likes and Facebook friends. Creativity abounded in 1968 with the likes of Rowan & Martin’s Laugh-In, the films 2001: A Space Odyssey, and Planet of the Apes. Mrs. Robinson, by Simon & Garfunkel, was the number-one smash hit song on the radio.

Lesson #1: The World Did Not End
First, the world did not end in 1968. As a society, we survived and were able to move forward and grow from the experience. It’s essential to keep this in mind and not let the anxiety of this past year cloud our judgment. This too shall pass.

The decade of the 1970s that followed 1968 ushered in a new wave of investment options for investors that were quite different from what had worked in the 1950s and 1960s. The 1970s were characterized by rising interest rates and stagflation, where hard assets investments, especially gold, silver, energy and real estate, provided some inflation protection and positive returns. 1968 was a setup for this shift, given the extreme budget deficits, the impact of Lyndon Johnson’s Great Society — which sought to lessen poverty and racial injustice — and the escalation of the Vietnam War. These events put us in a position in the early 1970s that is not dissimilar to where we are today. 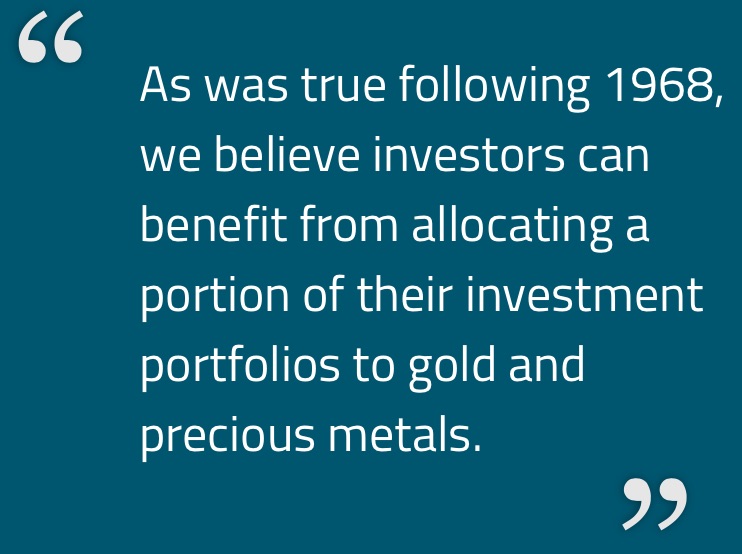 Key investment lessons from 1968 happened in the years that followed. In 1969, the first of multiple recessions hit the U.S., continuing through the 1970s. Political uncertainty persisted with three successive U.S. presidents that served just one term (Nixon, Ford and Carter). A battle against inflation, which grew precipitously over the next decade despite high unemployment and stagnant demand, fundamentally altered how the Federal Reserve (Fed) approached interest rates. Stagflation led to strict Fed policies that held interest rates historically high in the U.S., suppressing the returns that investors could expect via stocks and bonds. Interest rates climbed above 20% during the 1970s, and by the end of 1980, inflation surpassed 14%.

In addition, personal income taxes were very high in the 1970s. The marginal tax rate in this U.S. was 70%. On the other hand, nobody paid 70% because there were offsetting tax credits that benefitted society. Between 1930 and 1980, the top marginal tax rate averaged 78% and exceeded 90% from 1951 to 1963. Prominent economists agree that rather than penalize the wealthy, high marginal rates helped to drive entrepreneurial business income out of the individual tax system and into growing American businesses, which “reduced inequality and constrained the immoderate and unmerited accumulation of riches.” 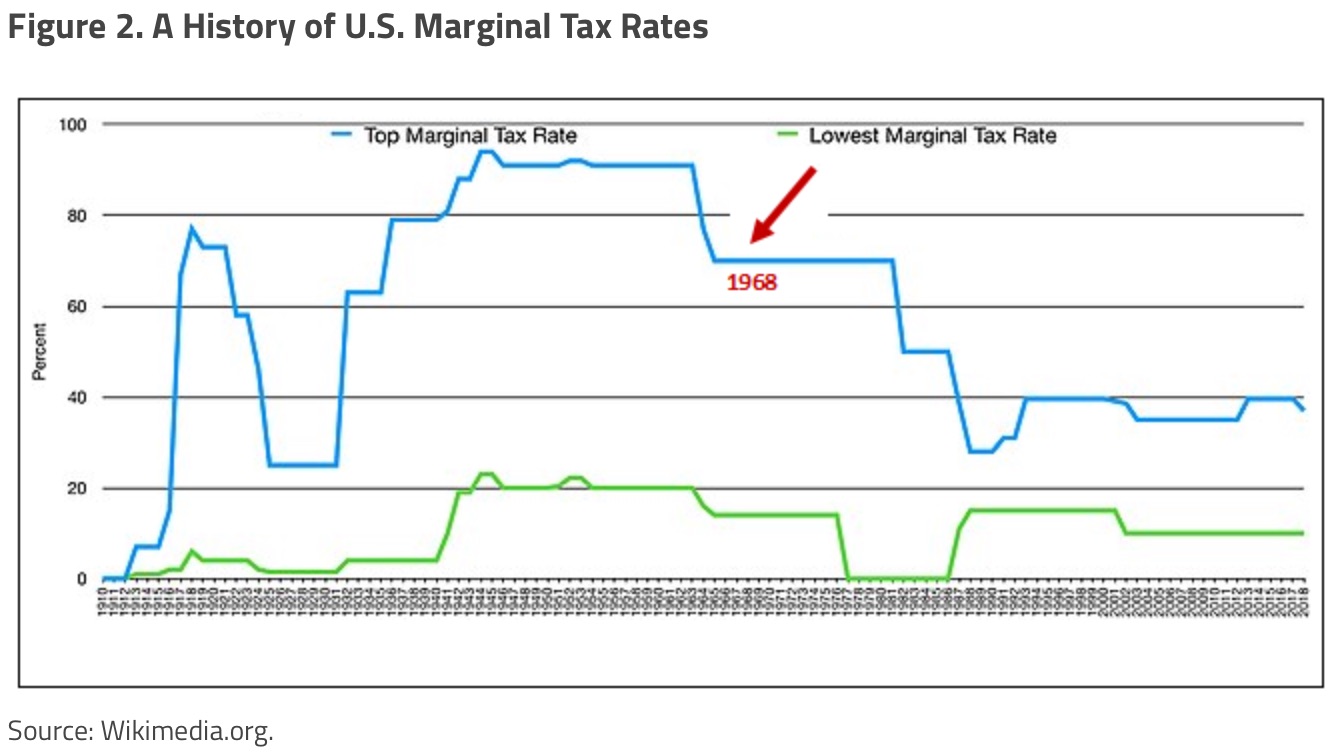 Tax credit incentives in the 1970s helped to fund low-income housing, to ignite research and development in computer technology and biotechnology and to expand professional sports teams. For informed investors, there were many excellent investment opportunities to offset the very high nominal tax rates. I think it’s wrong to get too dire about what’s coming, including a tax hike. Obviously, the deficits are out of control and modern monetary printing is here. The message is that this tough period will come to an end at some point, but it may be very beneficial to own hard assets, especially gold, in this environment.

Lesson #2: 2020 Will Impact the Next Decade, So Prepare
Second, from an investment standpoint, the repercussions of 1968’s difficulties were felt for a decade to come. They affected interest rates (which rose steadily), stock valuations and even how we bought and sold gold and other precious metals — something we humans have been doing for millennia.

Until 1971, gold and the U.S. dollar were convertible at a fixed ratio. With foreign countries holding U.S. dollars worth three times the amount of gold the U.S. held in Fort Knox. The U.S. was in a precarious situation since it had long provided the ability for foreign countries to exchange dollars for gold. Fearing a run on the nation’s gold reserves, Nixon eliminated gold/dollar convertibility in 1971, eventually freeing the gold market to float and allowing individual investors to own the precious metal at higher levels. In doing so, investors also gained a refuge from the rising inflation. 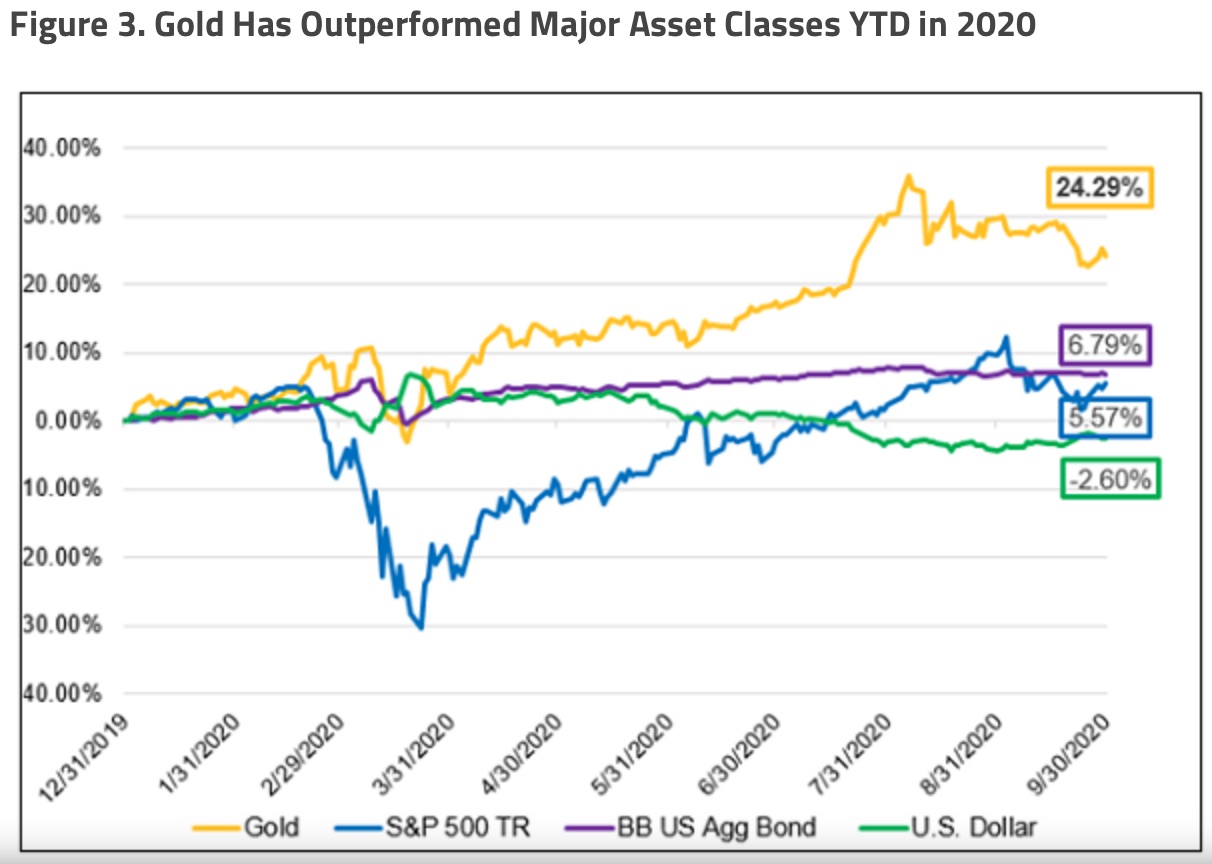 What Next?
As a country, like in 1968, we have made more promises than we can keep. We have spent beyond our means. We have again crowded our investments into a small group of behemoth technology companies (remember the Nifty Fifty?). Our fear is that the world post-COVID-19 will feature a period of stagflation. But, as bad as it sounds, there will be opportunities, just like there were in the 1970s, to protect and compound wealth through this paradigm shift (read more in A Paradigm Shift, posted earlier this year).

However, there is one significant difference between today’s economy and 1968. Precious metals investing has grown by leaps and bounds since 1971 when Nixon suspended the gold convertibility of the dollar. Individuals and institutions can now choose to own gold and silver through ETFs, closed-end trusts, mutual funds or holding the metals directly. The biggest lesson to glean from 1968’s tumult is that the U.S. and the world recovered from the uncertainty. Although the future remains unclear, finding a secure place to wait for the results while still capturing returns is one significant appeal of precious metals, especially gold and silver…

Gold, A Bullish Bet
Accelerating change means that what took a decade to unfold in the aftermath of 1968 is likely to ensue in just three to five years post 2020. Rather than waiting for the geopolitical and economic landscape to improve, we believe investors should proactively review how they are positioned for a changing future. As was true following 1968, we believe investors can benefit from allocating a portion of their investment portfolios to gold and precious metals.

Remember, this too shall pass. 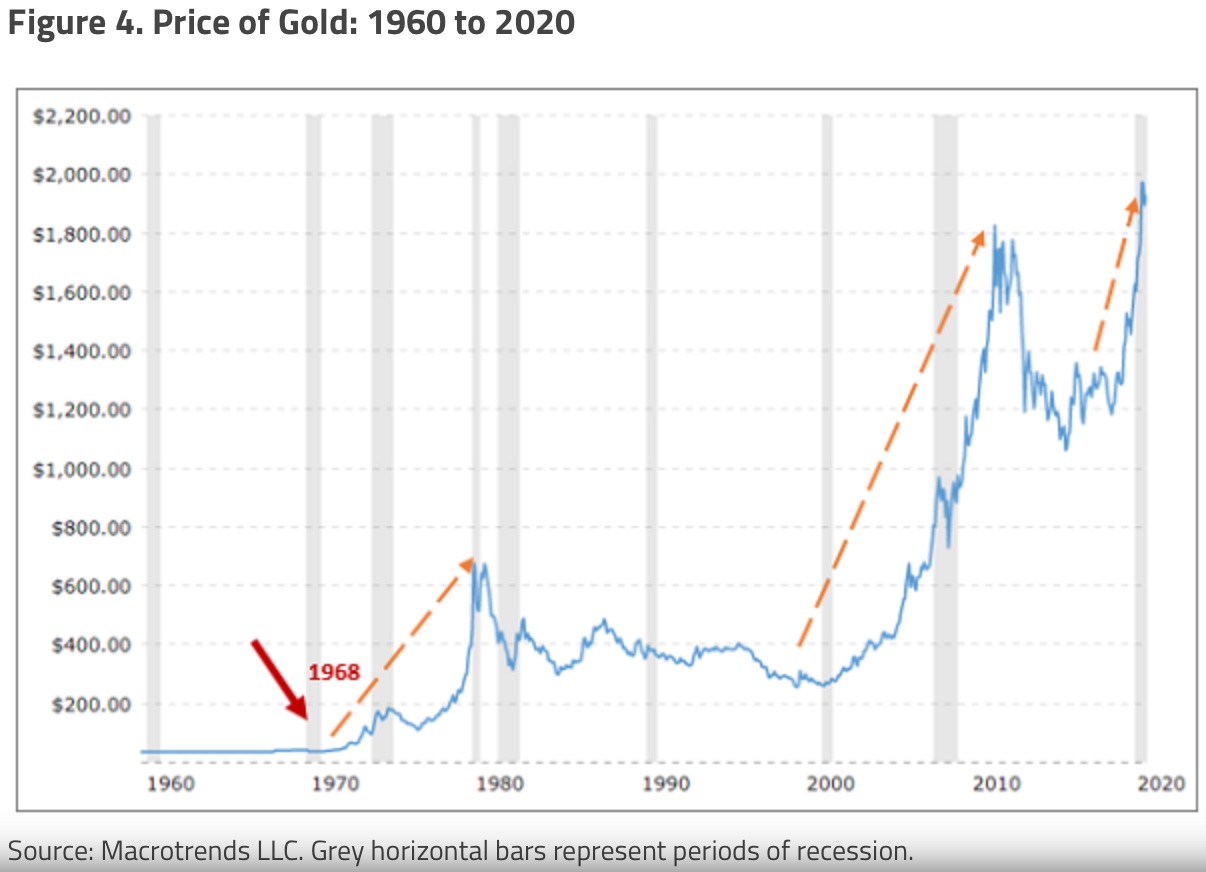