This Just Hit The Highest Level In 40 Years! But Look At What Collapsed To Lowest Level Since 2012!

This just hit the highest level in 40 years, but look at what collapsed to lowest level since 2012!

November 9 (King World News) – Peter Boockvar:  As for the newly passed physical infrastructure package, DJ reported yesterday that the Association of Equipment Manufacturers said its members expect to see the impact not until the first quarter of 2023. There is no such thing as shovel ready but, because of all the current supply challenges and dearth of labor, maybe that’s a good thing. Either way, as the spending is spread out over 10 years, about $50b per year is not relevant for our current $20+ Trillion economy in terms of an aggregate growth driver of substance.

So after inflating the valuations of just about everything via zero rates and QE for years and certainly well after the Covid emergency ended, to the point that household net worth (including value of stocks, bonds and real estate in particular) as a percent of disposable income as of Q2 is at 786% vs about 650% at the height of the housing bubble and 615% at the March 2000 peak of the tech stocks, the Fed in its biannual Financial Stability Report tells us that “Asset prices remain vulnerable to significant declines should investor risk sentiment deteriorate, progress on containing the virus disappoint, or the economic recovery stall.” Thanks.

“Everything Bubble” Vaults Household Net Worth As
% Of Disposable Income To A Staggering 786%! 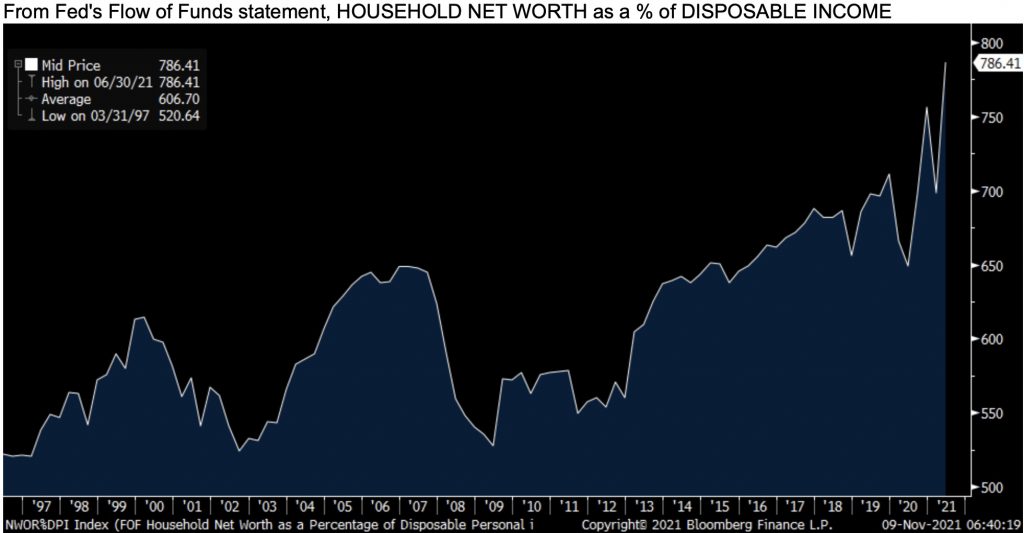 Here’s another ‘thanks.’ Philip Lane, the ECB chief economist, said yesterday “Extensive monetary accommodation is required to ensure that inflation pressure builds up on a persistent basis.” So in response to the higher inflation that the ECB has actively encouraged Politico reported a few weeks ago that “The French government will give a 100 euros payment to citizens earnings less than 2,000 euros per month after tax to help them deal with rising energy and fuel prices.” Why there is not more outrage outside of Germany of what the ECB is doing is because the ECB is financing the budgets of each country.

The October NFIB small business optimism index fell to 98.2 from 99.1. That matches the lowest since February. I mentioned yesterday the labor market components and noteworthy today is the 7 pt jump in those expecting Higher Selling Prices to 53%, the highest in the 40 yr history of this survey. This is NOT temporary I say for the umpteenth time. 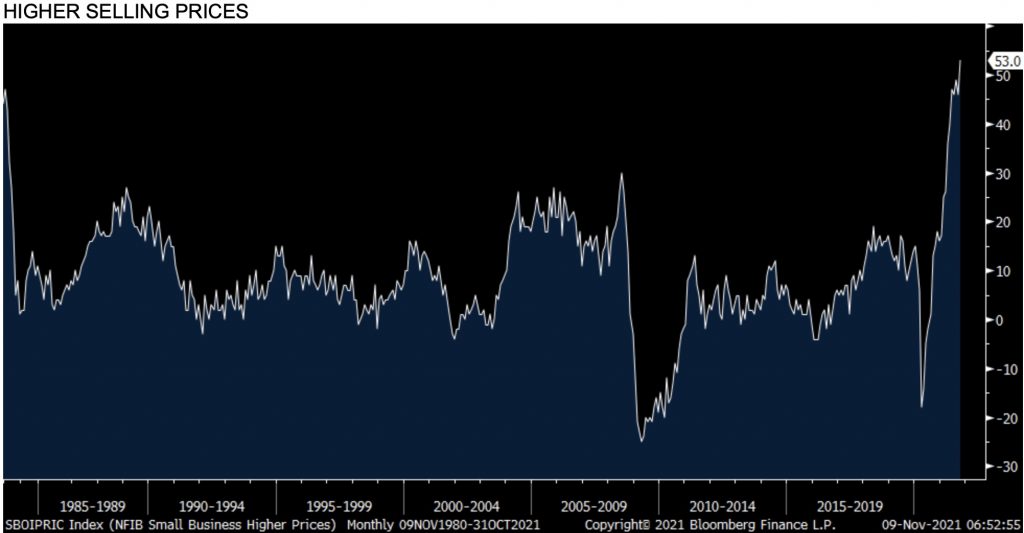 Capital spending plans rose 3 pts after falling by 2 last month and there was little change in Plans to Increase Inventory because even if one wanted to, they physically can’t right now. Those that Expect a Better Economy fell 4 pts to the weakest since November 2012 and is just 1 pt away from matching the lowest on record since 1981. That is saying a lot.

Those That Expect A Better Economy Collapsed
To Lowest Level Since 2012! 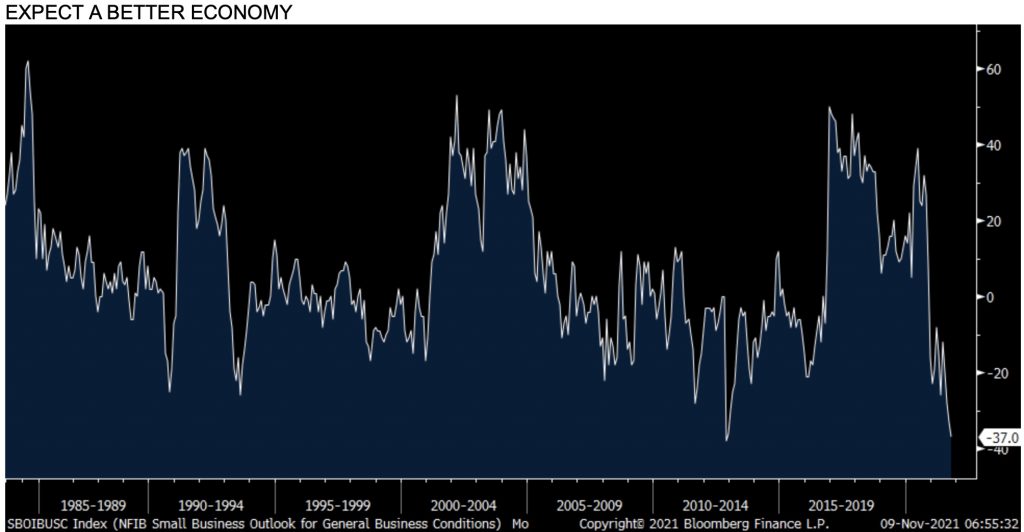 Those that said it’s a Good Time to Expand fell 1 pt to the lowest since February 2021. Because of the margin squeeze for small business who has less pricing power, Positive Earnings Trends weakened by 3 pts to -17, the lowest since August 2020.

The NFIB said “Small business owners are attempting to take advantage of current economic growth but remain pessimistic about business conditions in the near future. One of the biggest problems for small businesses is the lack of workers for unfilled positions and inventory shortages, which will continue to be a problem during the holiday season.” At least big companies have both the financial wherewithal and resources to manage the tough supply driven environment but it certainly is just not as easy for small businesses…

Nothing To See Here, Just A Little Understated Inflation 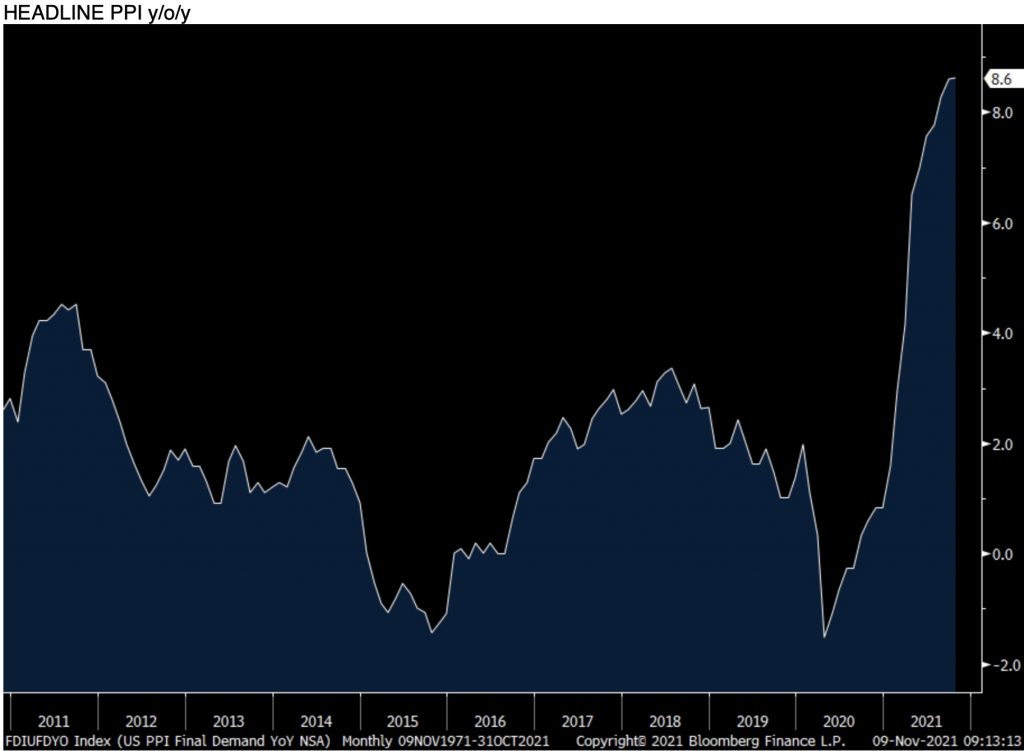 Wholesale service prices were up .2% m/o/m and are up 6.2% annualized over the past 6 months. With respect to transportation costs where every single item has to deal with, ‘Truck transportation of freight’ prices rose 2.5% m/o/m and 16.3% y/o/y. Air transport prices rose by 3.2% m/o/m and 8% y/o/y. By rail, up .5% m/o/m and 7.3% y/o/y. The BLS said “over 80% of the October increase in prices for final demand services can be traced to margins for automobiles and automobile parts retailing, which rose 8.9%.”

Inflation in the pipeline remains robust with core processed goods prices up 1.1% in October alone and by 19% annualized over the past 6 months. This is not the 1970’s, it is worse at least from this measure. At the early stage measured by unprocessed goods, prices jumped 8.4% m/o/m and 1.1% core.

Bottom line, while today’s data was as expected, the numbers are certainly eye opening in terms of the pace of gains. Inflation breakevens are unchanged with the 5 yr at 2.95%, just a few bps from a record high.

***To listen to the remarkable audio interview with Matthew Piepenburg where he discusses why the Inflation Tsunami and Gold are about to rock the world CLICK HERE OR ON THE IMAGE BELOW.

***To listen to the remarkable audio interview with Matthew Piepenburg where he discusses why the Inflation Tsunami and Gold are about to rock the world CLICK HERE OR ON THE IMAGE BELOW.