GOLD BULL UNLEASHED: One Of The Greats Just Flashed This Major Alert On Gold

With everyone focused on the Fed’s decision not to raise interest rates, one of the greats in the business just flashed this major alert on gold and warned 2019 is going to be a wild year for financial markets.

Catalyst For Gold Locked And Loaded
By Trey Reik, Senior Portfolio Manager, Sprott USA
January 30 (King World News) – We believe that gold bullion and gold mining equities may be poised for a multi-year uptrend. Gold bullion beat U.S. equities for the month of December, the fourth quarter, and the full calendar year of 2018. Spot gold1 declined 1.58% versus the 4.39% drop in the S&P 500 Total Return Index2 in 2018 (Figure 1). Gold also outperformed most currencies last year, with the exception of the Swiss franc and the Japanese yen… 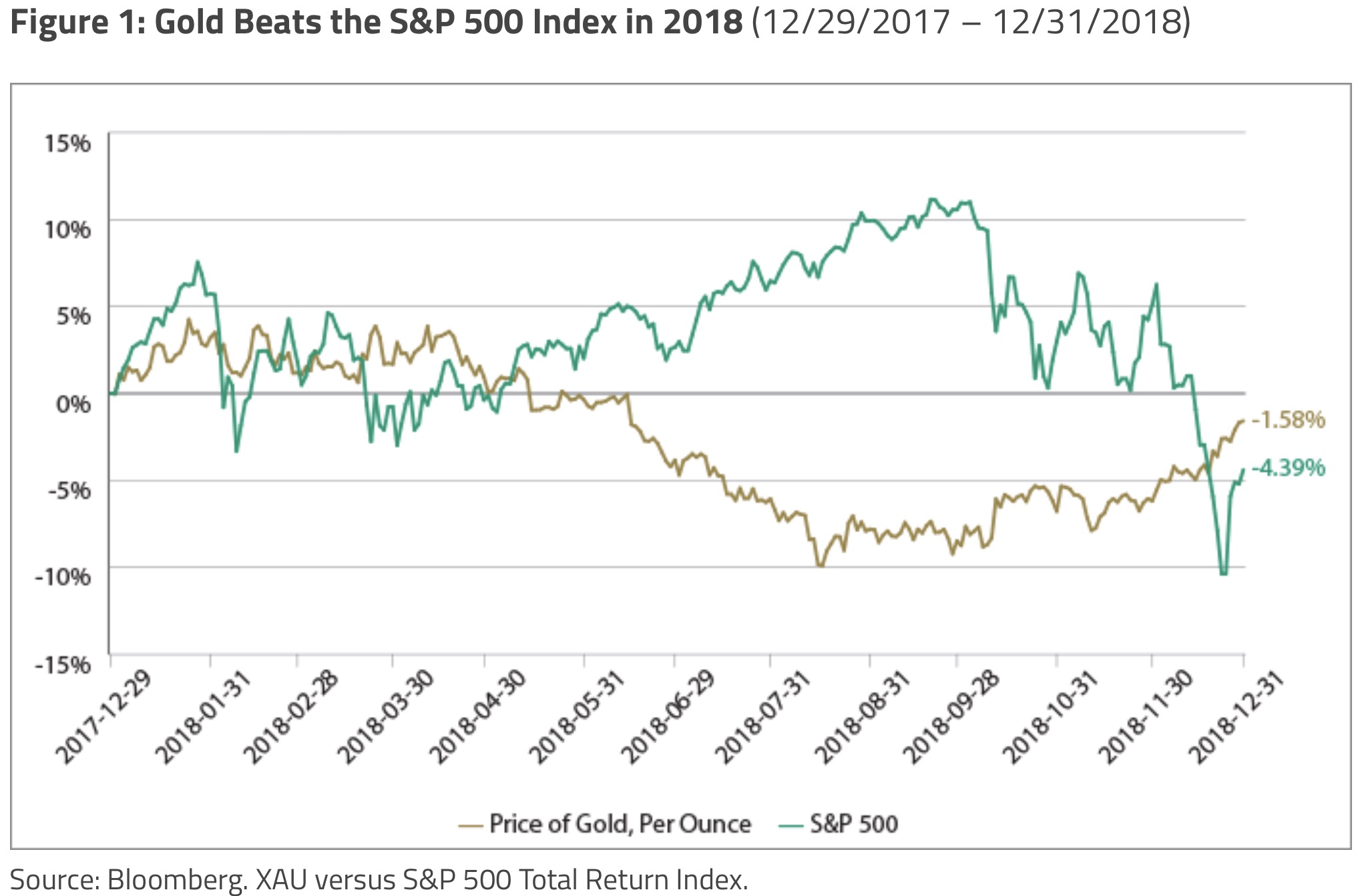 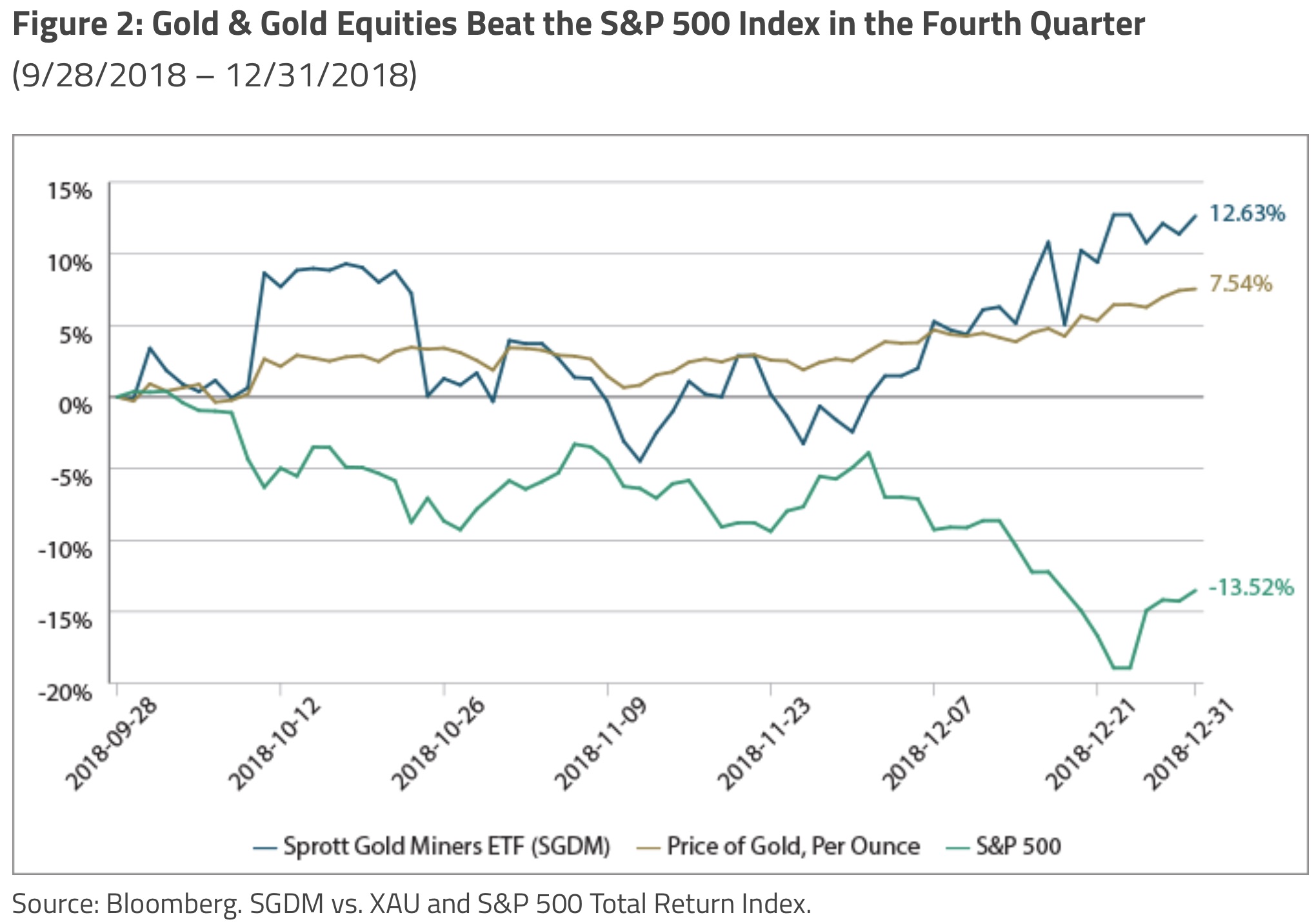 Fed U-Turn
We suggested throughout 2018 that the catalyst for gold’s next important rally would be growing recognition that the Fed’s current tightening cycle was reaching a conclusion. This crucial trigger appears to now be locked and loaded, as we discuss below. History overwhelmingly suggests the Fed will be easing policy within three-to-six months. Once this inflection in Fed policy officially hits the tape, gold should have already commenced what we expect to be a significant and sustained advance.

During 2018, we warned that Fed’s dual policy agenda of simultaneous rate hikes and balance sheet reduction was crimping dollar liquidity to the significant peril of reigning financial asset prices. Throughout the year, we documented signs of mounting financial stress in both peripheral and mainstream asset classes, ranging from emerging markets and subprime U.S. consumer credits all the way to mammoth U.S. markets for residential housing and corporate debt.

In a curious attempt to calm markets, Treasury Secretary Mnuchin tweeted on 12/23/18 that he had phoned the top six U.S. banking executives to confirm that, despite the government shutdown, there was “ample liquidity” in the financial system. Since investors hadn’t been concerned about bank liquidity before Mnuchin’s tweet, markets accelerated to the downside on 12/24/18. Secretary Munchin then made the exceedingly rare public announcement that he had scheduled a meeting of the President’s Working Group on Financial Markets for the morning of 12/24/18. Nicknamed the Plunge Protection Team (PPT), the Working Group was formed after the 1987 market crash and is composed of top officials from the Federal Reserve, the Securities and Exchange Commission and the Commodity Futures Trading Commission…

Fanning conspiratorial flames, the S&P 500 abruptly reversed course from its 2,351.10 close on 12/24 and rallied 11.02% through a 1/15/19 close of 2,610.30. What could account for such sudden resilience of previously slumping equity averages? As enjoyable as the Hollywood optics of a Christmas-eve PPT thriller might be, we would attribute the bounce in equities to a far more ordinary narrative — more like a late night re-run of an old sitcom. In recent weeks, global central banks have orchestrated significant and coordinated liquidity provision to provide Chairman Powell and his colleagues sufficient cover to stable their high-horses of monetary restraint.

Global Central Banks are Reversing Course
In tracking the aggregate size of the balance sheets of the world’s Big 4 central banks (U.S Fed, European Central Bank, ECB; Bank of Japan, BOJ; and People’s Bank of China, PBOC), we rely on the considered work of Andy Lees (Macro Strategy). Andy maintains a proprietary formula which tracks the daily U.S. dollar value of publicly reported updates in Big 4 balance sheet composition. Importantly, despite a US$1.219 trillion collective reduction in Big 4 balance sheets between 3/26/18 and 12/24/18, the U.S. dollar value of the Big 4 balance sheets reversed on a dime (or command) on Christmas Eve and surged an eye-opening $428 billion during the three weeks ended 1/15/19. 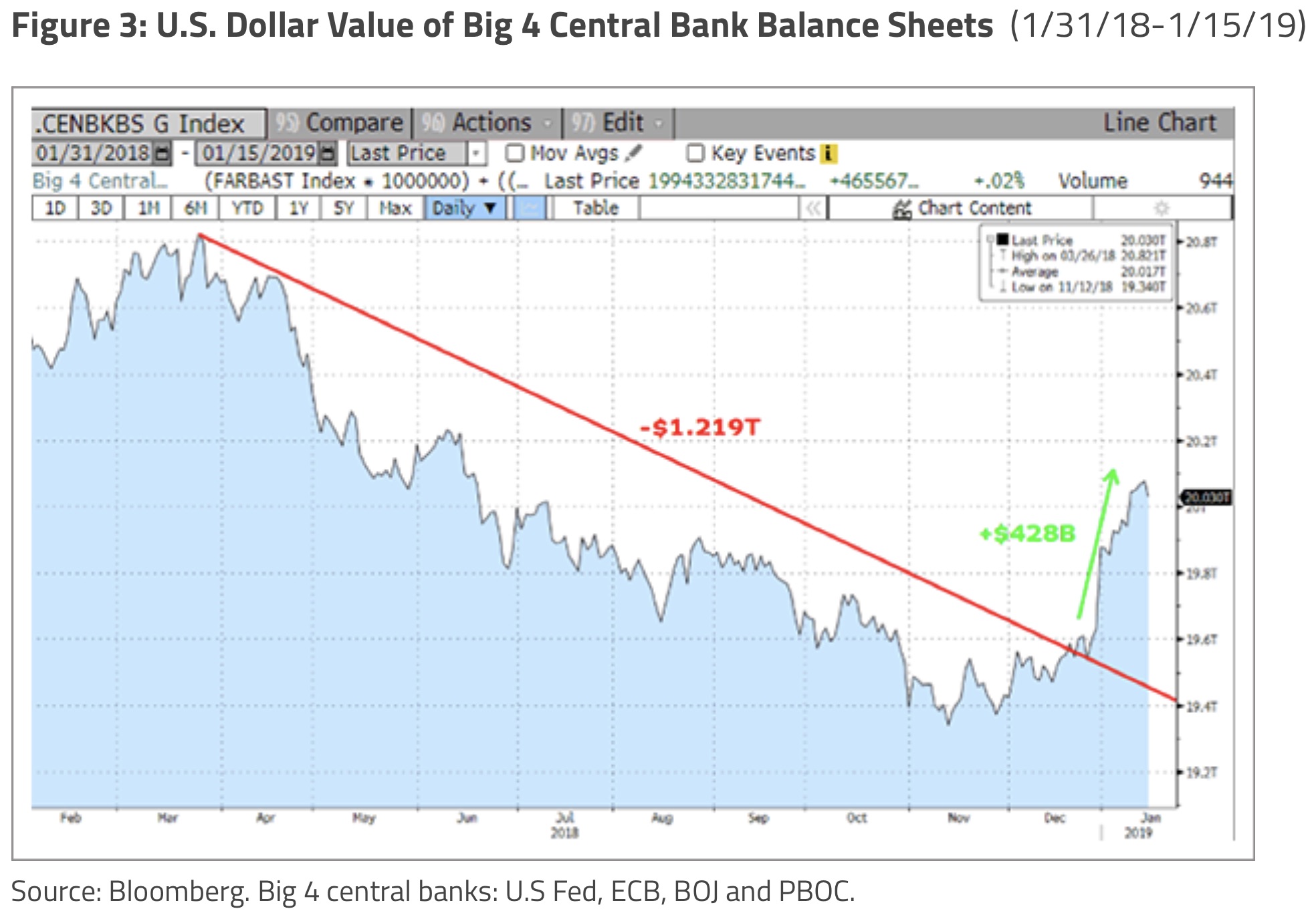 While the majority of this climb was due to exchange-rate movements, the surging delta included $45 billion in asset purchases by the ECB (after officially terminating its QE program in early December), and $35 billion was in purchases from the BOJ (after remaining relatively stable for eight months).

We cannot stress enough how one-dimensional global asset markets have become. On 1/15/19, the Institute of International Finance (IIF) updated its longstanding study of global debt levels. As of Q3 2018, the IIF estimates total global debt now stands at $244 trillion, or over 318% of global GDP. With this much debt in the financial system, the only variables truly relevant for financial-asset valuations are the policies and behaviors of global central banks…

It is that simple — reigning financial asset valuations are now completely dependent on sustained central bank liquidity. For example, despite Chair Powell’s bravado, it is now patently clear that the Fed cannot raise fed funds to 2.5% and reduce its balance sheet below $4.1 trillion without pressuring U.S. equity markets.

Fed Pause on Rate Hikes
By unanimous decision at its 12/19/18 meeting, the Federal Open Market Committee (FOMC) hiked the fed funds rate by 25 basis points. In his post-meeting press conference, Chair Powell telegraphed two additional rate hikes during 2019 and characterized the Fed’s balance sheet runoff as being on autopilot and not subject to change. By January 9, however, Fed Presidents Bullard, Evans and Rosengren (coincidentally, all 2019 FOMC voters) had weighed in against the necessity for further rate hikes.

By 1/14/19, even Janet Yellen had surfaced to suggest, “It’s very possible we may have seen the last interest rate hike of this cycle.” On 1/15/19, the Fed’s most ardent hawk (and final 2019 rotating FOMC voter), Kansas City Fed President Esther George, made it official, “It might be a good time to pause our interest rate normalization.”

Waiting for the Scales to Tip on Gold
There you have it. The Fed has all but admitted in the three weeks following its December rate hike that that hike may have been misguided. As gold investors, we have anticipated just such a Fed denouement for much of 2018. In classic irony, market reaction-to-date from abrupt reversal in Fed policy-guidance has largely been limited to equity ebullience. The 11% post-Christmas rally in the S&P 500 has been matched by a negligible $20 rally in the gold price (1.6%). Needless to say, we expect more reasoned analysis to tip the scales dramatically in gold’s favor in coming periods. 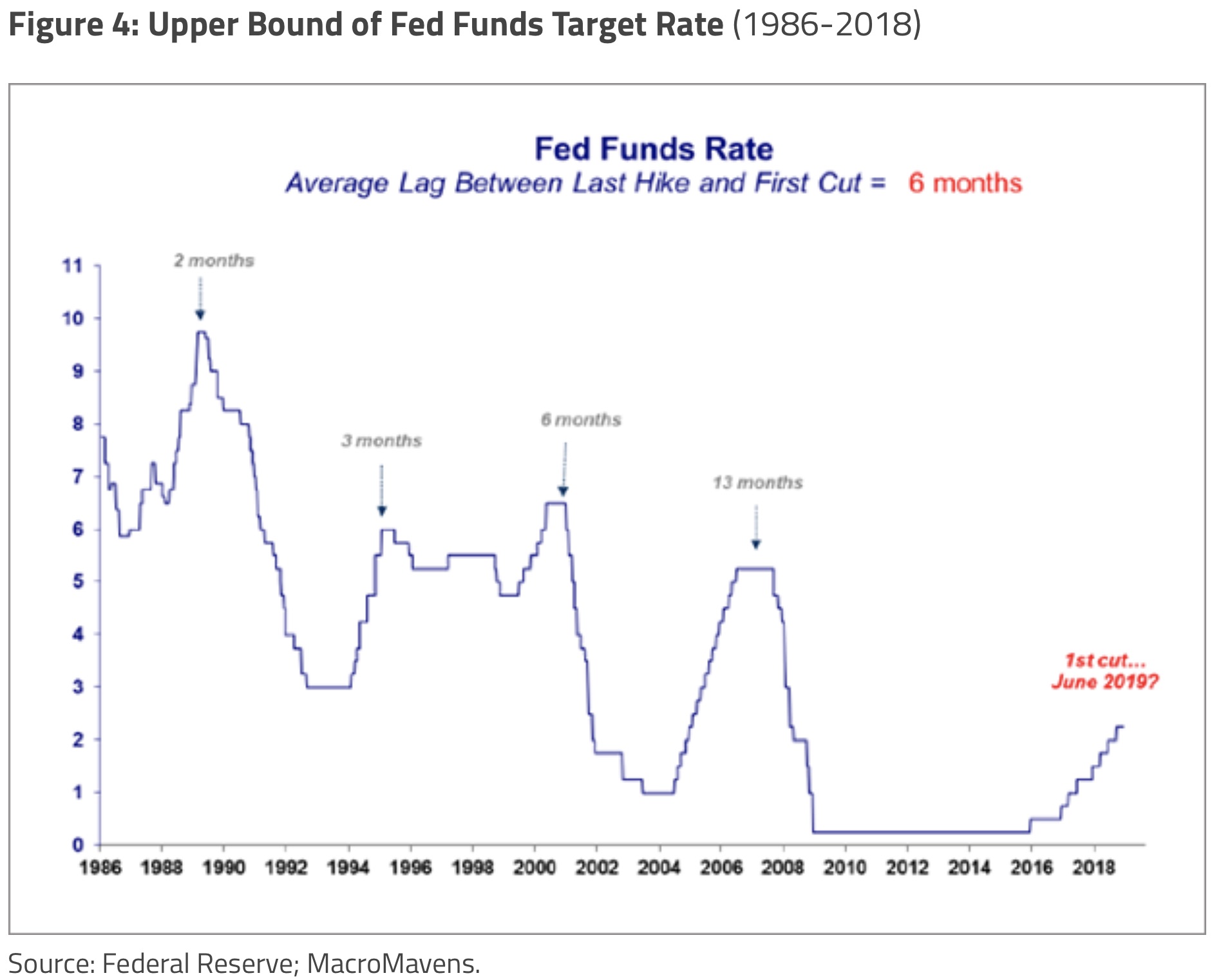 Typical of late bull market cognitive dissonance, we believe consensus is misreading the significance of the Fed’s evolving pause in rate hikes. On the surface, suspension of further tightening might equate to a back-in-the-pool signal, right? Actually, no it doesn’t. The history of Fed pauses during the past three decades has been to signal significant economic slowdown. At least in 1989, 2000 and 2007, the first Fed pause signaled imminent recession. Indeed, as shown in Figure 4, since 1986, the length of time between first Fed pause and first Fed ease has averaged roughly six months.

With all due respect to equity markets, we would suggest the evolving about-face in Fed policy holds unequivocally positive implications for gold and all the precious metals. Stay tuned.

James Turk – This Is What The Rocket Launch In Gold Means, Plus What To Expect Next