With the gold bull market on the move, yes, the price of gold will hit $20,000 but this will be the big surprise.

November 8 (King World News) – Dr. Stephen Leeb:  Whatever your feelings about the current election I doubt that it will change a thing about the anger and rancor that permeate this country. Why? For years, Americans have been misled and lied to. And I’m not talking about politicians. Rather, I’m talking about Wall Street, the most profitable segment of the U.S. economy and in many ways the most insidiously destructive.

By Wall Street I’m referring to the whole gamut, including both major and less-major financial firms: investment banks, commercial banks, insurance companies, payment processors, and others. Its ability to inflict damage was seeded in the early 1970s, with the ill effects accelerating over the past generation.

$20,000 Gold
In the first book I ever wrote, published in the mid-1980s (Getting in on the Ground Floor) I accurately forecast that stocks were embarking on a long-term bull market. The book did not mention gold even once, because I was convinced that stocks were the only game in town. If anyone had told me a time would come when I would see gold as the best – indeed as the essential – investment, I would have laughed. But though I did not know it at the time that earlier period set in motion forces that have led to the present gold bull market, a bull market that will persist for at least a generation and easily dwarf the gold bull market of the 1970s. As I’ve said it in these interviews before, a target of $20,000+ for gold not only is reasonable but likely understates gold’s potential. 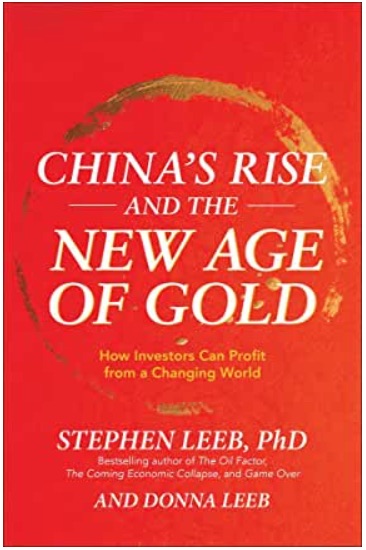 In my latest book, China’s Rise and the New Age of Gold: How Investors Can Profit from a Changing World, I look at these forces in detail, and they tie in with where I think Wall Street has gone astray to the detriment of the country. In brief, when the U.S. delinked gold and the dollar in 1971, it ultimately led to a ballooning of debt, burgeoning bureaucracies, the country awash in dollars, and a focus on short-term thinking and results.

The rise in debt and dollars propelled the financial industry and the markets ever higher and had the unfortunate effect of giving a greedy and increasingly short-sighted Wall Street a controlling hand in virtually all parts of American life. Wall Street was going to be doing whatever most benefited its own members, with the individuals and companies it supposedly served becoming mere props for money generation.

In other words, expect that any advice from Wall Street institutions is likely to be self-serving rather than best serving the interests of investors. One example that recently caught my eye was a four-page advertisement that Vanguard ran in The New York Times…

It stood out for me for being simultaneously striking and completely unremarkable. In the paragraph that most caught my eye, Vanguard recommended that investors own a diversified mix of equities and bonds. And that’s totally unremarkable – the well-trodden path long followed by investment houses and pension funds as well. For pension funds, a typical allocation is 60% stocks, 40% bonds. And indeed, for most of the postwar period, a combination of stocks and bonds made sense. Stocks provided a solid return while bonds, returned but offered downside protection when stocks faltered.

But that era of stocks and bonds came to an end as the new century got under way. That makes the recent Vanguard ad striking for what it omits – which is any reference to commodities, and in particular to gold. That’s astounding because it totally ignores that over the past 20 years, gold has been the top-performing asset, outstripping stocks by 200 percentage points and bonds by more than 250 percentage points.

Even more relevant is that gold will almost surely continue to outperform, and by a rising amount, over the next 20 years. Steering investors today into a mix of stocks and bonds, and ignoring gold, is akin to outfitting your high schooler with a manual typewriter instead of a laptop – something that made sense a while back, but no longer.

But gold isn’t going to be denied or go away. In China’s Rise and the New Age of Gold, I describe what has powered gold’s rise so far this century and why truly stupendous gains in gold lie ahead. The book lays out the key interlinked underlying forces that will propel gold upward. Here I’ll look at just one of these, one that isn’t widely understood or appreciated. It’s a highly significant change in the relative importance to global growth of the developing world vs. the developed, or high-income world. This may sound arcane, but it’s crucial to understanding the dramatic shift that is occurring in the investment backdrop.

As the table shows, prior to the 21st century, high-income countries – accounting for only around 15% of global population – racked up faster growth than poorer, developing countries. The big got ever bigger while the small got smaller. The disparity was so great that per-capita GDP of the rich was more than 20 times higher than for the rest.

Starting this century, however, and led by China, growth in the developing world began to quicken and eventually to surpass growth in the developed world. The gap in per-capita GDP narrowed to where high-income countries are nine times, not 20 times, wealthier than the world’s have-nots. Better, but still a long way to go.

A good proxy for commodity needs is per-capita energy use. As long as a country is developing and has a relatively small service sector, its growth will require rising energy usage. Readily available data show that 67% is, roughly speaking, the magic cut-off number. Once a country’s service sector reaches 67% of GDP, per-capita need for energy, and commodities overall, starts to decline.

Currently the service sector accounts for 55% of GDP in the developing world. That leaves 12 percentage points more to reach the magic 67% level. It took 20 years for the figure to climb by 10 percentage points, from 45% to 55%. This suggests we likely face at least another 20 years during which per-capita demand for commodities from developing countries, by far the biggest part of the world, will be rising.

Commodities Are Set To Skyrocket vs Stocks! 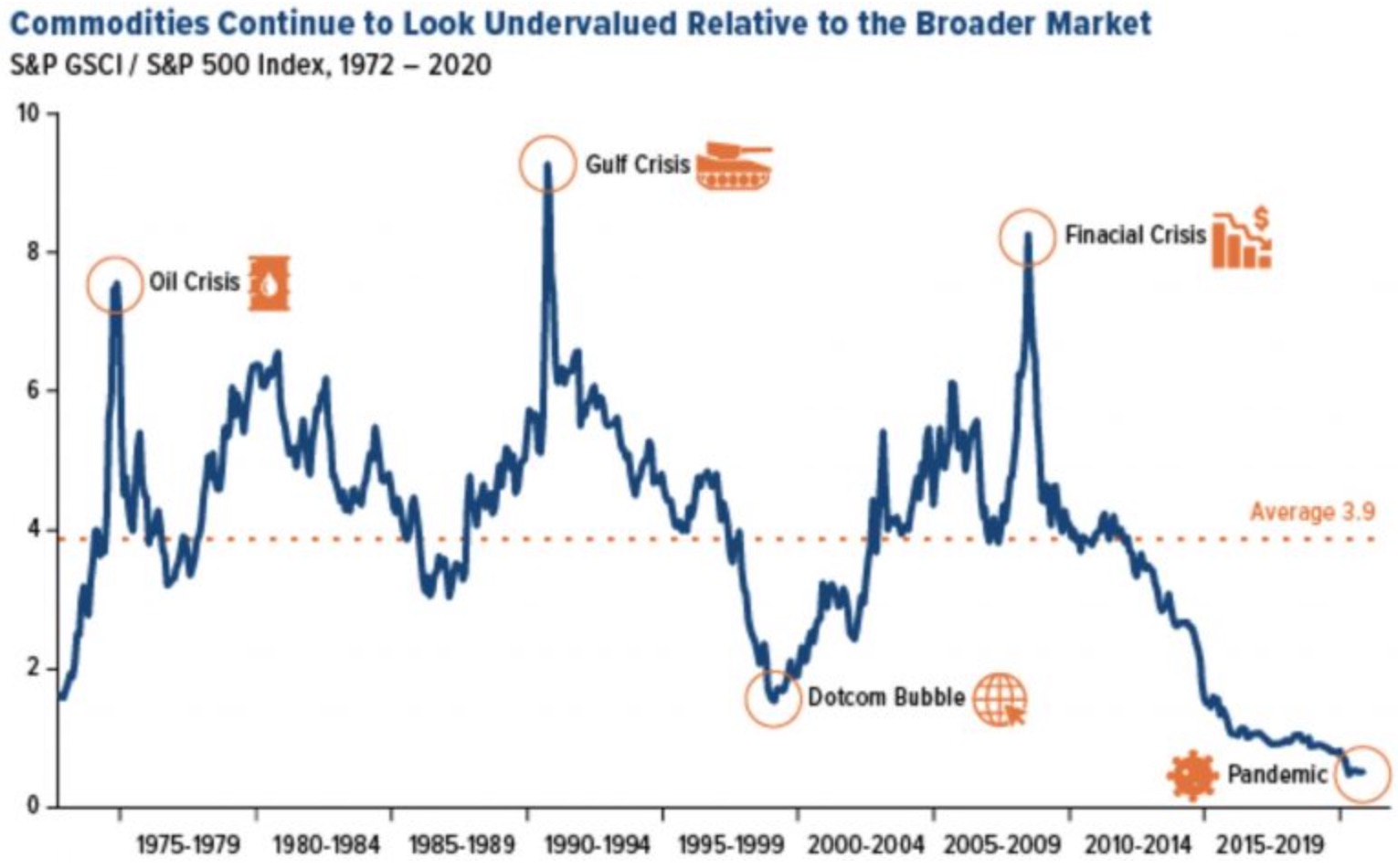 Inevitably this will lead to commodity scarcities and rising commodity prices, accelerated by the push to transition to renewables because of climate concerns. Moreover, rising demand for commodities already has reduced reserves for many critical commodities such as copper. The bottom line is that we face at least two decades of pressure on commodities, as commodities not services continue to be the main driver of global growth.

That’s where gold comes in. When commodities rise, gold, which is both a commodity and a currency, rises faster. That has been the case so far throughout this century. The jagged bull market in most commodities, with many outperforming stocks and bonds, went hand in hand with the outsized outperformance by gold I referenced above.

All that I said above is something Wall Street should have could have acted on at the beginning of the century. My book Defying the Market, which was published in 1999, made these points and so did other authors and commentators. Sometimes I muse about how different things might have been this century if financial advisers had insisted that their clients have a healthy allocation in gold. Gold would probably be a lot higher than it is today. Individual investors would be a lot richer, and Wall Street would be poorer and less entitled. And America overall would be a lot happier as it was in the 50’s and 60’s when most in the economy were on the same side.

FINAL THOUGHT: Don’t Be A Bag Holder
So, I’ll leave you with this thought: if your financial advisor tells you to put your money in a collection of stocks and bonds, don’t be cowed or fooled. Insist that if you are going to own stocks, you want a big chunk of them to be gold miners and gold ETFs and other vehicles that are highly leveraged to gold and commodities. As gold rises ever higher, you’ll be among the few who are not bag holders.

Jon Case Just Issued This Dire Warning About The US!

GLOBAL STOCK MARKET CRASH: “A Week Of Selling Unlike Almost Anything We’ve Seen Before”