In a dynamic economy, an action not only triggers just one effect, but always an entire series of different consequences. While the cause of the first effect is easily recognizable, the other effects often occur only later and no such recognition occurs. Frédéric Bastiat described this phenomenon in 1850 in his ground-breaking essay “What Is Seen and What is Not Seen”:

In the economic sphere, an act, a habit, an institution, a law produces not only one effect, but a series of effects. Of these effects, the first alone is immediate; it appears simultaneously with its cause; it is seen. The other effects emerge only subsequently; they are not seen; we are fortunate if we foresee them …

There is only one difference between a bad economist and a good one: the bad economist confines himself to the visible effect; the good economist takes into account both the effect that can be seen and those effects that must be foreseen. Yet this difference is tremendous; for it is almost always the case that when the immediate consequence is favorable, the later consequences are disastrous, and vice versa. Hence it follows that the bad economist pursues a small present good that will be followed by a great evil, while the good economist pursues a great good to come, at the risk of a small present evil.

A similar phenomenon can be seen with the consequences of artificially suppressed interest rates and monetary stimulus: in the short term, they appear to have positive effects, the long-term effects are, however, disastrous. In order to understand why, it appears helpful to reflect the “Austrian” perspective on interest rates, which distinguishes itself from the classical and neoclassical as well as Keynesian perspectives by attaching central importance to the time factor.

The underlying assumption is that people are inclined to consume a certain product sooner rather than later. Hence, if savers restrict their current consumption and provide the resources for investment instead, they do so only on the condition that they will be compensated by increased consumptive opportunities in the future. Hence, the interest rate can be regarded as a measure of the compensation payment, where people are willing to trade present goods for future goods. In an ideal economy, the demand for investment capital equals the savings, coordinated by an interest rate which “Austrians” call “natural” or “originary” and which provides information about the time preferences of market participants.

In a fiat money system, however, banks do not collect savings and forward them to investors. They create money ex nihilo by issuing credits and it is not at all sure, whether the investment projects that are set into motion can finally be financed by the pool of savings. The production of capital goods takes time and only in the end it becomes apparent, whether the values of savings and investments are identical.

Furthermore, central banks intervene in the markets by determining interest rates. Against the backdrop of the concept of the “natural” interest rate, it is now somewhat easier to understand why the current situation of artificially suppressed low interest rates is not sustainable in the long run. “Austrians” acknowledge that capital has a heterogeneous structure, which has formed historically as the result of countless individual decisions. At any given point in time, individuals are anticipating potential opportunities to profitably expand on the existing state of the capital structure based on their specific knowledge and are thereby modifying it. Some technologies become obsolete over time, and the associated ends or links of the structure will accordingly regress.

However, since interest rates that are kept low in the long term on the one hand foster investments that would not be profitable under different circumstances, and on the other hand stimulate present consumption as well because savings will produce lower returns, such a policy cannot possibly be sustainable. Ultimately, there simply will not be enough resources available.

Unfortunately, long-term investments will appear to be especially profitable, as in the calculation of their viability, discounting by low interest rates will result in very high net present values. Monetary policy manipulations may be able to obscure the actual situation for a long time, and stock markets may rally by chasing a monetary illusion – but sooner or later, the scarcity of real resources and malinvestments will become obvious. Then there is either a crisis in which debts are liquidated and the money supply contracts, or the next step in terms of loose monetary policy is undertaken, which sustains the illusion for longer and leads to an even greater distortion of the capital structure.

Hence, if one studies these processes closely, it becomes clear that, while symptoms are treated, the underlying problems cannot be solved by global zero-interest-rate policy (ZIRP), but that this instead undermines the natural selection process of the market. With artificial stimulus like ZIRP, we only end up with a situation in which governments, financial institutions, entrepreneurs, and consumers who should actually be declared insolvent all remain on artificial life support. 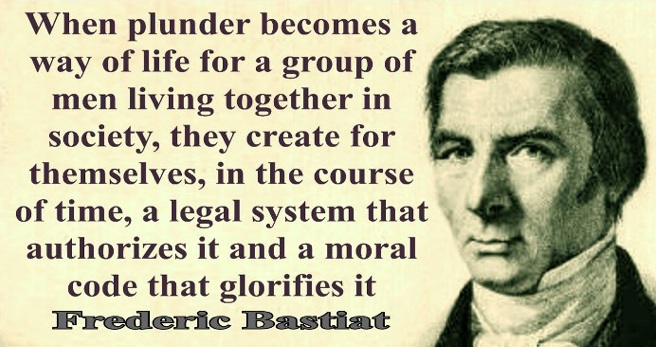 In line with Bastiat’s thoughts, numerous fatal long-term consequences of zero-interest-rate policies can be identified, but are generally ignored:

• Conservative investors by nature come under increasing pressure with respect to their investments and take on excessive risks in light of the prospect that interest rates will remain low in the long term. This leads to capital misallocation and the emergence of bubbles.

• Structurally too low interest rates in industrialized nations due to carry trades lead to the emergence of asset price bubbles and contagion effects in emerging markets.

• Changes in human behavior patterns occur, due to continually declining purchasing power. While thrift is increasingly mutating into a relic of the past, taking on debt comes to be seen as rational.

• As a result of the structurally too low level of interest rates, a “culture of instant gratification” is created, which is among other things characterized by the fact that consumption is financed with credit instead of savings. The formation of wealth becomes steadily more difficult.

• Many corporate managers engaged in share buybacks in order to get higher bonuses resulting from higher share prices. Also mergers and acquisitions and even dividend payments have been financed by cheap credit. This kind of indebtedness is crucially dependent on future cash flows and hence very speculative.

• The medium of exchange and unit of account function of money increases in importance, while its role as a store of value declines.

Conventional monetary policy — that is, the promotion of credit creation by lowering interest rates — reaches its limits once the “zero-bound” is reached. In order to continue the spiral of stimulus, “unconventional monetary policy” becomes ever more important. The multitude of “newfangled” monetary policy measures is seemingly only limited by the imagination of central bankers, whereby recent years have shown that central bankers can be extraordinarily creative. That this phenomenon is nothing new, is inter alia shown by this observation by Ludwig von Mises in 1922:

But an increase in the quantity of money and fiduciary media will not enrich the world. … Expansion of circulation credit does lead to a boom at first, it is true, but sooner or later this boom is bound to crash and bring about a new depression. Only apparent and temporary relief can be won by tricks of banking and currency. In the long run they must lead to an all the more profound catastrophe.

The seeds for the next crisis are already being sown. The longer the zero interest rate policy lasts, the greater risks investors will have to take, especially the ones who have certain return requirements. At the same time, the capital structure in general as well as many individual speculative strategies have adapted to ZIRP. The attempts by central banks to return to “monetary normalcy” would likely cause a vast amount of defaults such that a big market crash might be triggered. Hence, central banks appear to be bound to ZIRP, which will foster even more speculation and unproductive investment, will further enlarge the discrepancy between savings and investments, and will more than ever aggravate structural problems.

The point at which confidence in the fragile edifice of debt will be lost is difficult to forecast. We are strongly convinced that gold represents a sensible hedge against such a crisis of confidence.

***KWN has now released the powerful audio with one of the top economists in the world, Michael Pento, where he discusses what to expect in gold, silver, of the year, what surprises to expect as well as how investors can protect themselves, and much more, and you can listen to it by CLICKING HERE OR ON THE IMAGE BELOW.

What’s Next After Gold’s Massive Breakout?