One of the greats in the business looks at “Game Over,” while another points out the shocking levels of inflation we are seeing.

Yes, They Are Lying About Inflation
Fred Hickey:  “Poor J. Powell. Can’t get inflation up as it remains too “soft.” Meanwhile: “Domestic steel prices have risen more than 160% since last August,” lumber prices more than doubled, house prices up 14% year-over-year, Oil over $60 a barrel, “skyrocketing” shipping costs.

Propane costs up 30%, worst semiconductor shortages that I can ever remember, leading to across-the-board price hikes, and on and on. Inflation too “soft”? The only thing soft about inflation is the way the BLS calculates it.”

Danielle DiMartino Booth at Quill Intelligence:  There is dissension in QI’s ranks. We know that 1974’s The Godfather Part II is the best sequel ever. With flawless performances by Robert DeNiro and Al Pacino, it garnered even more Oscars for Francis Ford Coppola than his first epic and was the first sequel to win Best Picture at the Academy Awards. 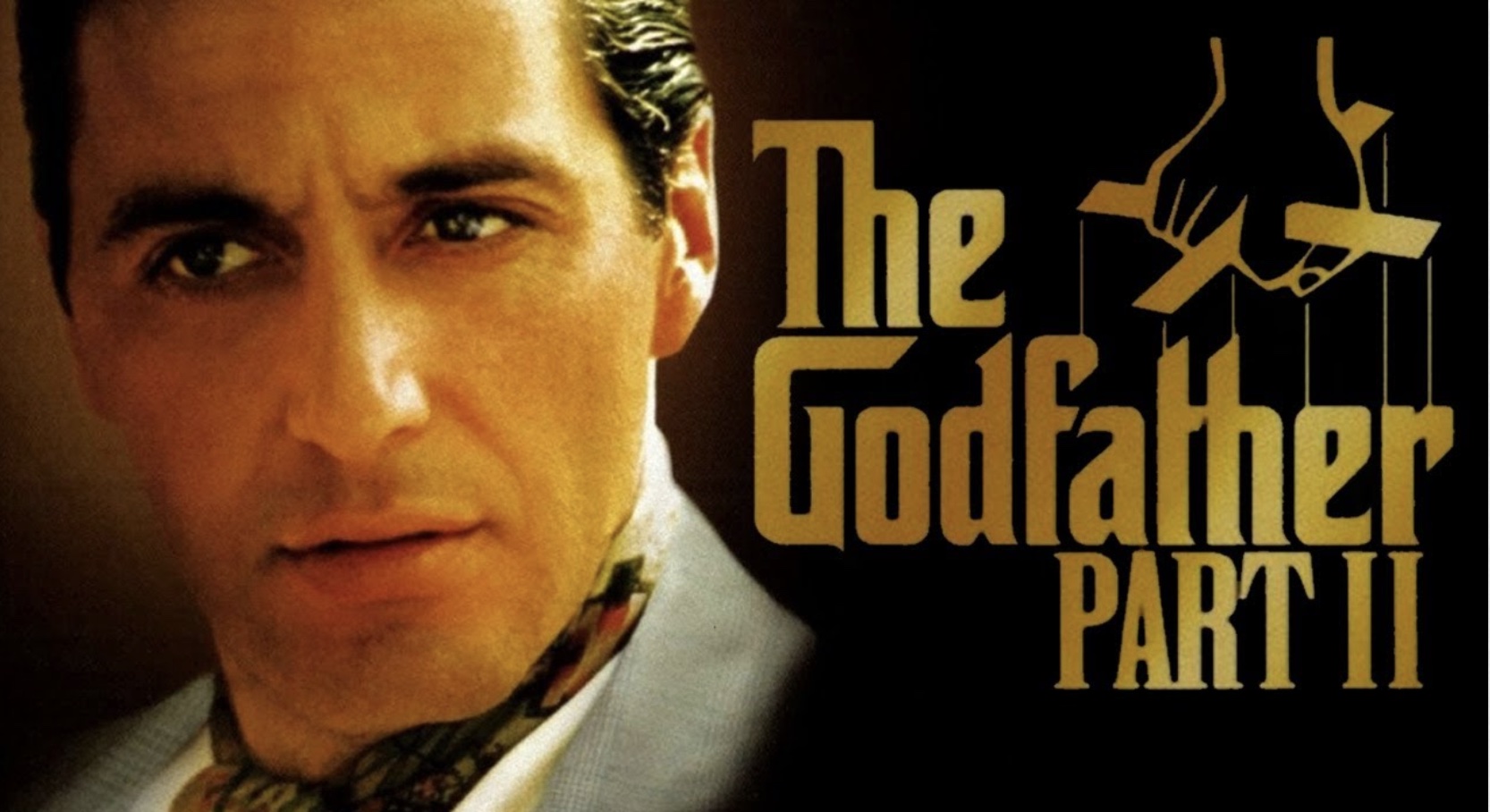 While that is the end of the story, Dr. Gates has proposed an alternative to be taken under advisement: 1986’s Aliens. In the interest of politeness, James Cameron’s genius does manipulate the tension beautifully — the build-up to carnage, to the unbearable waiting that climaxes in balls-to-the-wall action. The Marines who accompanied Ripley (Sigourney Weaver) are one-by-one fleshed out and brilliantly killed off. Yes, yes…there’s some Hamlet there. And there are two exclamation points. Godfather II doesn’t feature a single acid-veined xenomorph! And Hudson’s (late, great Bill Paxton) quote, “Game over, man! Game over!” transcended 1980s pop culture! 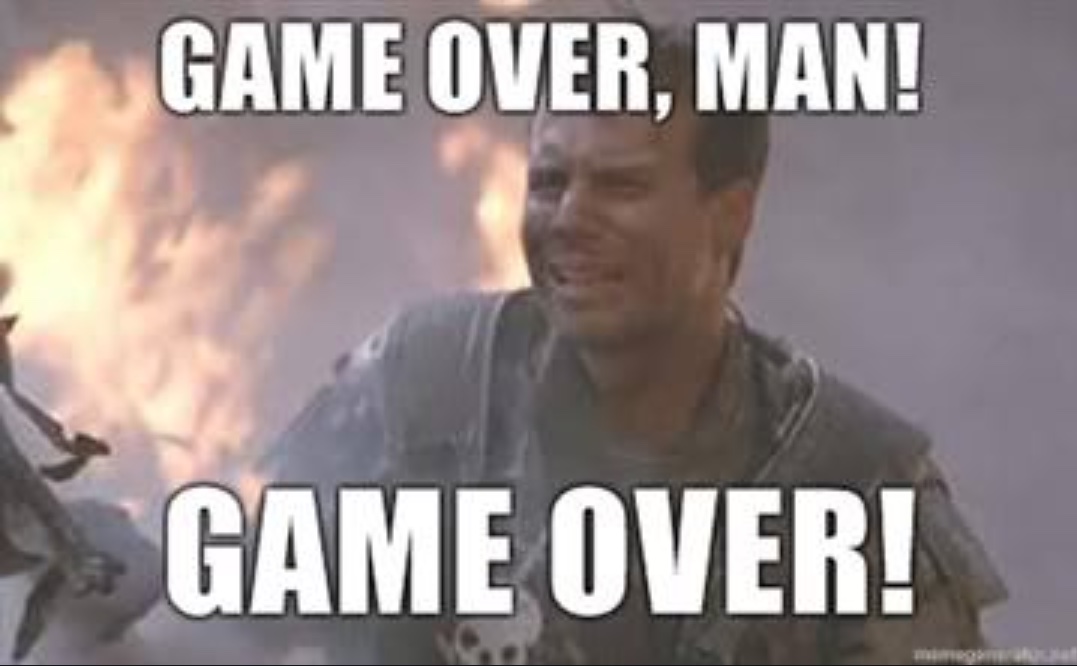 As said, the nominee is under consideration only. We will always be true to our Italian roots. The first installment that preceded today’s Feather was released in November 2019, when QI introduced the “Outlook Gap” which we’re proud to report has since been emulated on the Street. Simply defined, it’s the difference between CEO Expectations and Consumer Expectations via the Conference Board. Back then, as the economy crawled towards a recession nearly all today deny, we illustrated how the Outlook Gap had reached the widest on record in 2019’s third quarter. Never had CEO’s views on what the future held been as depressed as they were relative to their employees. Given the oscillation of the Outlook Gap tracks the labor cycle, we ventured that the reversal in the unemployment rate typically seen at the next cyclical inflection point would be that much more violent.

On to today’s Sequel. One of the nuances of the Conference Board’s CEO Confidence survey is that firms’ leaders are asked not just about the six-month outlook for the economy but also that which pertains specifically to their own industry. The Outlook Gap included the former; the Outlook Gap II contains the latter, depicted in today’s left chart (yellow line) and hit a record high in 2021’s first quarter. 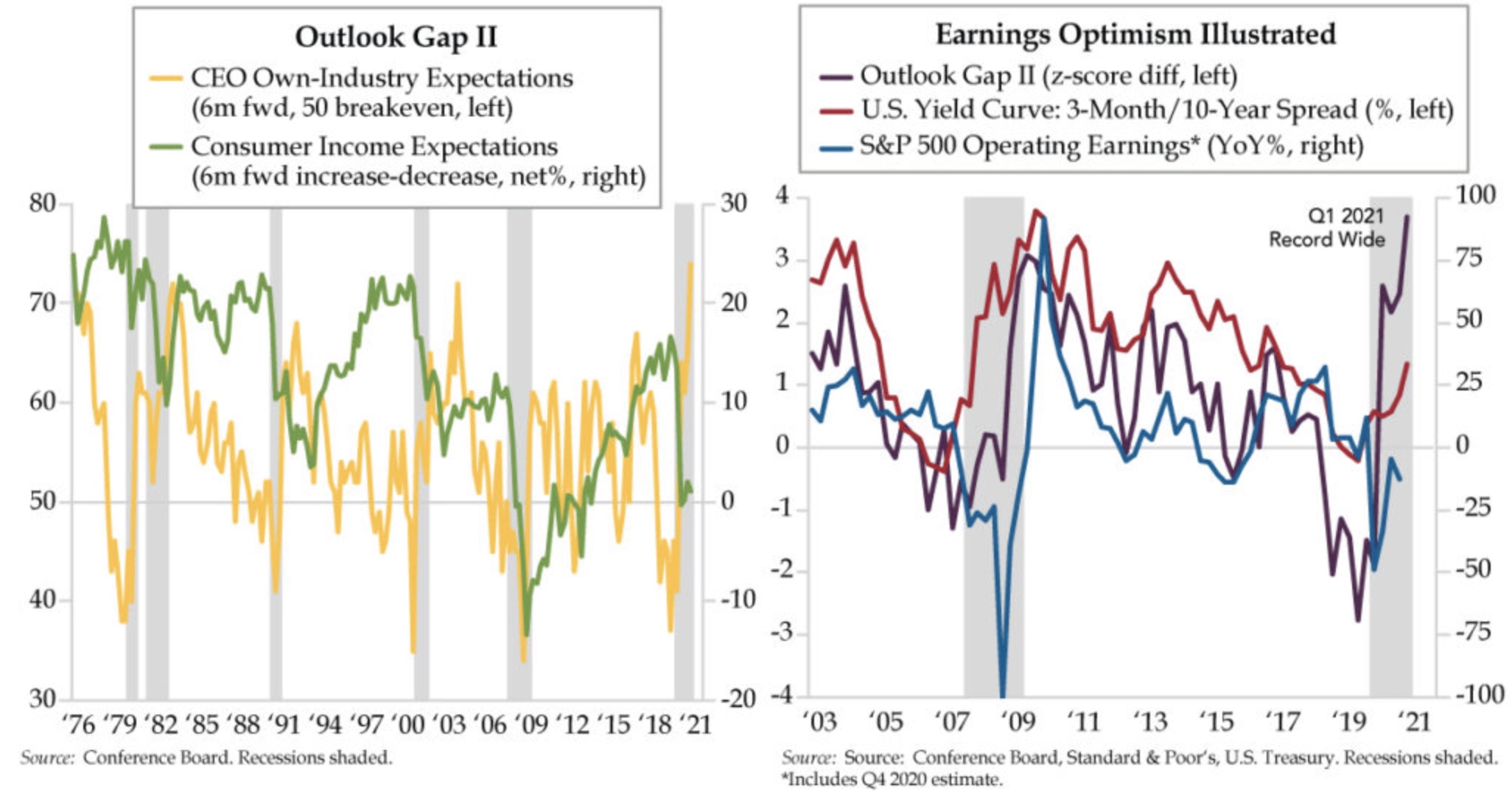 With an eye inside their firms, Conference Board noted that CEOs across industries are planning for life after COVID-19. If downside risks are avoided, this optimism will likely translate into higher wages, employment, and capital spending over the next year. Think of it as vaccine velocity translating to escape velocity.

The same optimism is not emanating from the household sector. On slightly less optimism for the forward view on business conditions and employment, Consumer Expectations cooled in February. Meanwhile, income expectations only modestly improved, rising to a net 2.0% in February from January’s 0.3%. The first quarter-to-date average of net 1.2% (green line) represents a mild setback from the fourth quarter’s 2.0% print and is well below the roughly 13% long-run average. Not a serious vote of confidence for earnings prospects or the inflation outlook.

The right chart zooms in to and plots together the last two business cycles. We normalized The Sequel with z-scores, deviation from the mean adjusted for volatility. The first-quarter reading was a record wide 3.70. The optimism illustrated in the purple line has not been met by the same cheerfulness of bond traders. The yield curve between the three-month bill and the ten-year note (red line) has risen in a much more measured fashion. It appears that the COVID shock had a greater impact on the spread between boss and underling expectations than it did on the manipulated Treasury market.

The Sequel produces another parallel. The hope for better company performance from C-suite occupants can come from more positive outlooks for the top-line, bottom-line, or some combination thereof. Again, the linchpin is an efficacious vaccine rollout. And when payroll employment is still 10 million in the hole and 18 million are collecting some form of unemployment insurance – nine times pre-COVID levels – a rev up in revenues would generate a burst in profit growth.

Each week, Standard & Poor’s compiles earnings per share (EPS) estimates for the current reporting season. The latest S&P 500 operating EPS for 2020’s fourth quarter was 12.5% below the same quarter in 2019, a step down for the trend vis-à-vis the third quarter’s 4.8% drop. Because the pandemic exploded onto the scene last March, comparisons between the first quarters of 2021 and 2020 will not be clean. That said, if CEOs are right, earnings could rip out of the gate to start this year, and not just because of base effects. (Our one caveat: Insider selling has not abated.)

CEOs are about to call game over on the recession. They noted that the outlook for employees’ wages has improved, while the potential for layoffs has receded. Follow through would fatten paychecks and induce optimism across asset classes as jobless claims fell anew. The current yield curve is not pricing in such an outcome.

In this audio interview Pierre Lassonde shares with KWN listeners around the world his top mining stock pick for 2021 that he has been aggressively buying as well as discussing where the price of gold is headed and why he is so bullish and you can listen to the interview now by CLICKING HERE OR ON THE IMAGE BELOW.

To listen to Alasdair Macleod discuss the shortage of available physical gold and silver in London and Zurich and what to expect next in the metals markets CLICK HERE OR ON THE IMAGE BELOW.