With the next global crisis rapidly approaching, the everything bubble is about to create skyrocketing gold prices.

Staggering Debt
By Ronald-Peter Stoeferle, Incrementum AG Liechtenstein
June 22 (King World News) – In Financial Accounts of the United States (formerly Flow of Funds) data can be derived to create approximations of the debt categories presented above. The following chart depicts the development since 1955. Throughout the 1950s, 60s and 70s productive debt to GDP averaged just over 40%. Today that ratio has risen to almost 75%. This needs not be a problem though. As stated above, such debts tend to self-liquidate and not put strain on other parts of the economy. Unproductive debt as a share of GDP averaged somewhat higher, at 49%, between 1950 and 1980, but has since exploded to reach a level of 220% by 2009 before falling down to a still elevated level of 165%. However, the liquidation of unproductive debt in the aftermath of the financial crisis was more than offset by increases in counterproductive debt levels which are today at a record high of more than 130%. 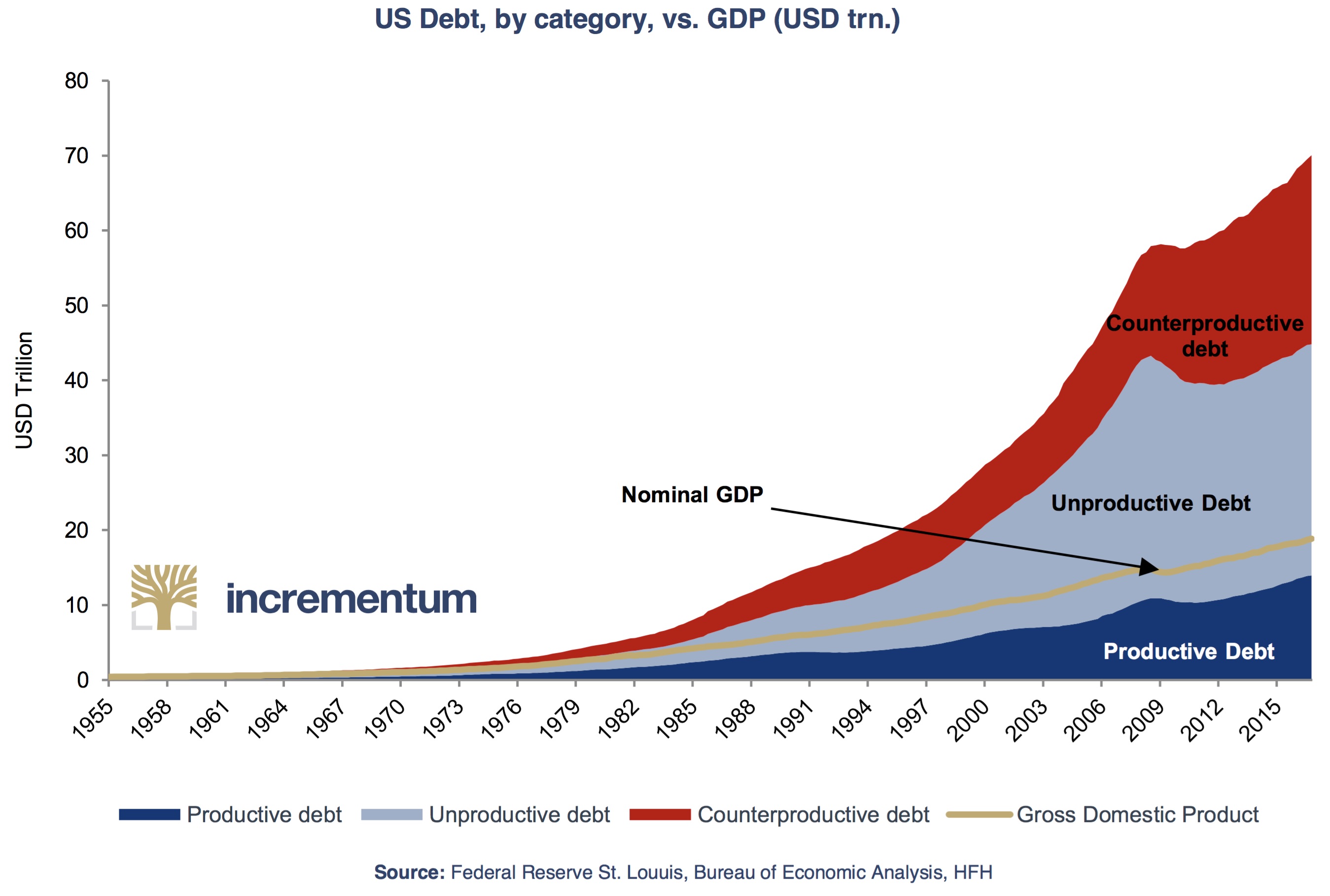 To make a long story short, exploding debt levels since the end of Bretton-Woods led not only to higher debt to GDP ratios, it led to far more of the wrong kind of debt. Resource allocation became unsustainable as the western world started to consume their seed corn by essentially mortgaging first, their productive assets, and then their life’s assets, just to sustain high levels of current consumption. The end result is masses of indentured debt serfs with no plausible prospects of ever repaying their debts…

The main reason for this development is that central banks severed their direct and indirect tie to gold; by doing so they suddenly were able to act more flexibly whenever recessions (resource re-allocations) occurred. In other words, when unproductive debt reaches a stage where it diverts too many resources away from the productive part of society, a market rebalancing will inevitably occur as unproductive economic activity cannot, by definition, be organically funded from the real pool of resources. The only way to forcefully stop resource re-allocation in a recession is through the very visible hand of government, either indirectly through money printing (a transaction of nothing for something) or through fiscal policy.

The aftermath of the 2007/09 meltdown is a perfect example. Unproductive debt was piling up on the US balance sheet as struggling consumers maintained a rising standard of living through consumer debt and mortgages in lack of proper income growth. When the crash came, the state bailed out unproductive debt by bringing it on the public balance sheet, consequently leading to economic stagnation. Federal Reserve policy of ZIRP and QE just made a bad situation worse.

The burden on productive, self-sustaining, parts of the economy has grown so large that there is only very little room to grow the economy. The obvious solution is clearly to raise interest rates and stop the flow of additional money, but this would cut funding to unproductive/counterproductive parts of the economy and lead to another great recession.

While the recession would re-allocate resources to more sustainable activities and set the foundation for organic growth and prosperity, it is at odds with both the agenda of myopic politicians eager to avoid short-term pain and monetary policymakers enmeshed in the web of Keynesian voodoo-economics.

How Much Longer Can This Continue?
The solution will therefore be to “prime the pump” at the slightest hint of an upcoming recession. So far, this policy has been deflationary as it creates excess capacity and brings future demand into the present, however, at some point it will lead to reduced demand for cash with cash-holders losing confidence in the currency they hold. The transition from deflation to inflation will certainly feel like a proper recovery, but it will turn out to be the final dead cat bounce just prior to a new, stagflationary cycle.

The all-encompassing redistributive welfare state, which either directly through taxes or indirectly through the monetary system continually shifts and reallocates large amounts of capital, manages to paper over the effects of capital consumption to some extent. It remains to be seen how much longer this can continue. Once the stock of capital is depleted, the awakening will be rude. We are certain that gold is an essential part of any portfolio in this stage of the economic cycle. … At this point, gold is primed to show its true colors as a safe haven asset and appreciate in both absolute and relative terms.

The Everything Bubble
The chart below reveals how peaks in the MS/S ratio for the U.S. economy regularly are associated with the end of inflationary booms and the onset of financial crises.

M2 Money Supply To Saving Ratio For The US 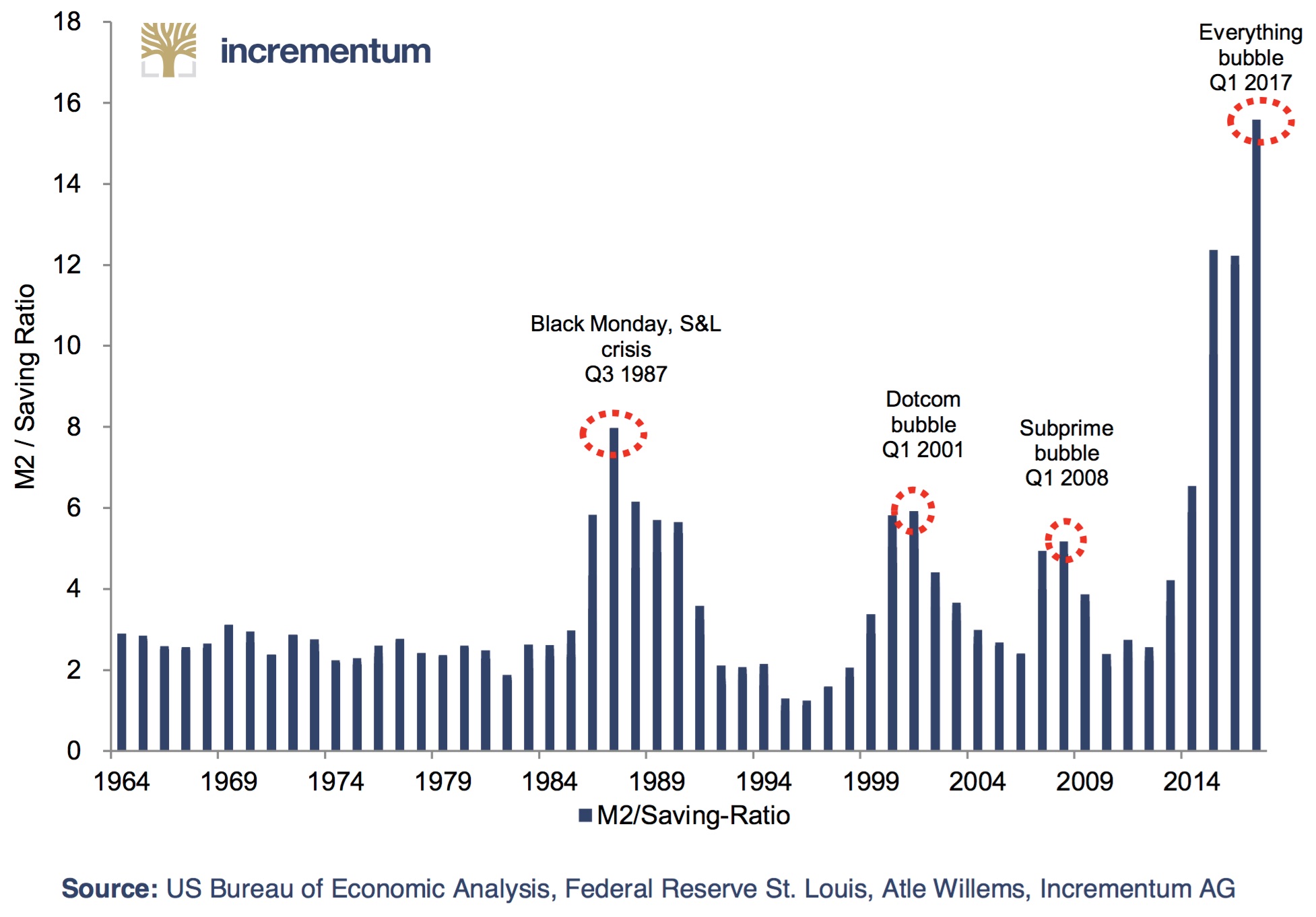 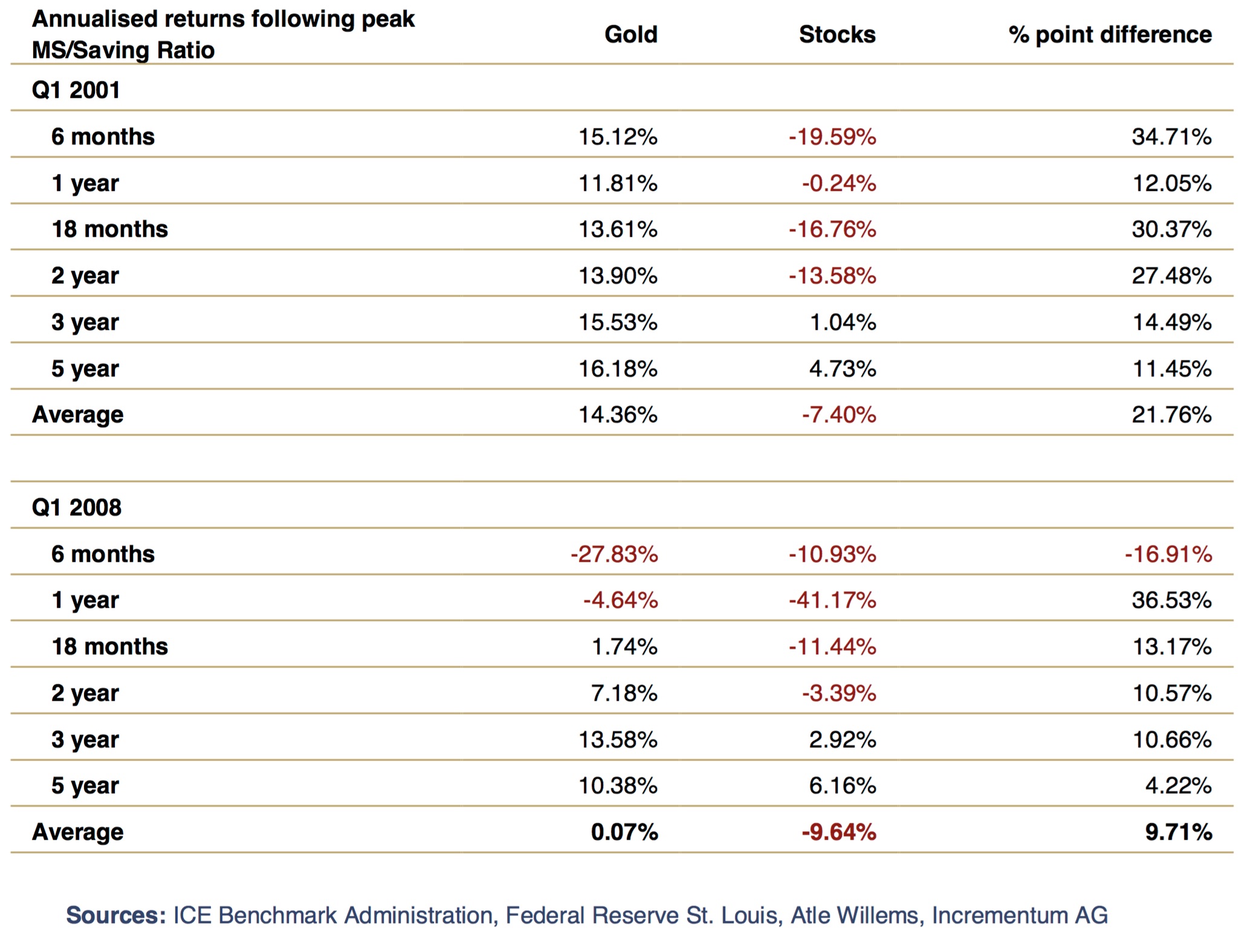 The table shows that gold appreciated 13.6% on an annualized basis during the 18- month period following the Q1 2001 peak in the MS/S ratio while stocks declined 16.8% on the same basis. Gold hence outperformed stocks by 30.4 percentage points (annualized) over this period. Overall, gold appreciated considerably over 18-month intervals following peaks in the ratio and decisively outperformed stocks on all occasions but one; the six-month period following the 2008 peak.

King World News note:  When the pendulum swings in gold’s favor and away from stocks, the upside gains in the gold and silver markets will be breathtaking.