On the heels of another wild trading week in world markets, today one of the top economists in the world sent King World News an incredibly powerful piece warning that the public's faith in Western central planners is about to collapse.  Below is the fantastic piece from Michael Pento.

February 7 (King World News) – In 1958, economist W.H. Phillips wrote a paper that argued an inverse relationship existed between wage inflation and unemployment.  The crux of his theory was when unemployment is high wage growth is absent; but when the unemployment rate is low wages rise rapidly.  Philips established his theory under the framework of a curve and it was aptly referred to as “The Phillips Curve.”

However, many economists wrongly adopted the Phillips Curve by relating it to general price inflation, rather than to just wage inflation.  Sadly for Phillips Curve enthusiasts, the high inflation and high employment rates of the 1970’s turned this metric on its head.

Stagflation in the U.S. throughout the 1970’s proved high inflation and high unemployment can—and often do–exist concurrently, thus rendering the Phillips Curve obsolete. This same phenomenon where rising inflation coincides with a rising unemployment rate has also been witnessed throughout the globe. Fittingly, the notion that more people working was the cause of inflation should have found its place in the Wall of Shame of economic theories, sandwiched in between other items falling out of vogue at the time, such as toe socks and the pet rock.

However, the Keynesian economists who held this curve in such high esteem in the 1960’s, were somehow unable to let it go. Therefore, a new metric was created rooted in the Phillips Curve, but conveniently much more ambiguous. They called this metric the Non-Accelerating Inflation Rate of Unemployment (NAIRU).  The idea behind NAIRU is inflation and unemployment really only become correlated once unemployment falls below a certain calculated rate. But you have to understand that the Fed’s number for NAIRU is more elastic and flexible than Gumby. And when it does fall below that predetermined rate, as it did from 1996-2000, and inflation (as the Fed measures it) is still absent, the Fed must come up with an excuse for its inaction.

Just to be clear, there is no relationship between unemployment and the overall rate of inflation. As Milton Friedman taught us, inflation is solely a monetary event. It is my view that inflation is caused by a persistent fall in the purchasing power of a currency. The market becomes convinced that substantial currency dilution will occur and the value of paper money falls.

Even if everyone able to work became gainfully employed it would not cause inflation. It may lead to rising nominal wages but the increase in products and services provided by these newly employed persons would absorb the wage growth without causing prices to rise. A growing labor force and increasing productivity are the very keys to economic prosperity.

NAIRU, The Fed And A Deflating World Economy

But, the reason it is important to understand the Phillips Curve and more importantly NAIRU, is because this metric is perhaps the most important data point Janet Yellen looks at when making decisions on Fed Policy.  When unemployment is higher than NAIRU, as it is now, Yellen sounds like a dove. But when unemployment falls below, as it did in 1996 to 2000, Yellen has shown she's more ready to tighten policy than other central bankers.

Ms. Yellen has an unfounded fear that too many workers will hyperinflate our deflating worldwide economy. Just to understand how unfounded these beliefs are in reality, take a look at these two charts:

U.S. inflation as indicated by the CPI since 2011 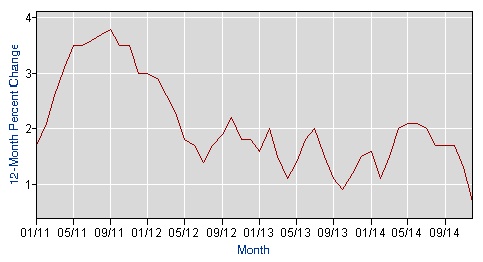 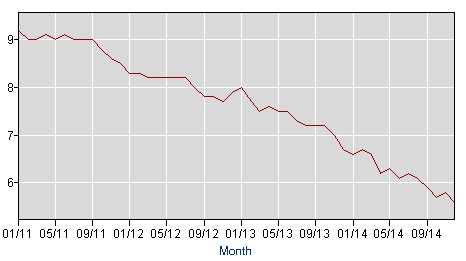 As you can see, inflation and unemployment are both declining in tandem. I defy any Keynesian adherent to the Phillips Curve or NAIRU to glean the correlation between a falling unemployment rate and the rate of inflation.

It was the Fed’s initial belief back in 2010, when the unemployment was just south of 10 percent, that a change in monetary policy would be necessary once the unemployment rate reached 6.5%. However, since inflation and the economy have not picked up, they have since moved the new target to around 5.4%.  With unemployment currently at 5.6%, we are getting dangerously close to Ms. Yellen’s line in the NAIRU sand.

The problem is, while Janet Yellen is busy tinkering with the Phillips Curve in a pernicious attempt to determine how many Americans she will allow to find work. She is missing the crumbling economic fundamentals all around her. The flattening yield curve, plummeting commodity prices, and weakening U.S. and international economic data, all show that the asset bubbles created by central banks are popping. Once again, the Fed is applying faulty models to the wrong economic fundamentals.

However, if unemployment continues to fall Ms. Yellen will be forced by her own passionately held doctrines to raise interest rates into a deflationary cycle. I welcome this move and the overdue and inevitable consequences that it brings; but also understand the Fed will unwittingly be doing the equivalent of parking a car on the train tracks.  Ms. Yellen will even have to ignore the fact that the falling unemployment rate is happening for the wrong reason, as it coincides with a falling labor force participation rate.

Faith In Central Planners Soon Coming To An End

Yet again the Fed will be missing what is right in front of them.  As usual, it is fighting yesterday’s war with the wrong weapons.  This pervasive and protracted incompetence is not just confined to the U.S. central bank. The central banks of Europe, Japan and China also now join the Fed in owning the markets for real estate, equities, bonds and (as a direct consequence) their entire economies.

This is why the immense power to determine the money supply and level of interest rates should never have been given to a group of unelected bureaucrats. And is why faith in the money printers to solve our economic problems is soon coming to an end. KWN will be releasing more interviews today. ***ALSO JUST RELEASED: Billionaire Eric Speaks Out About Friday's Dramatic Smash In Gold And Silver CLICK HERE.