As the United States mirrors Weimar Germany, bubble records are being shattered!

U.S. Mirroring Weimar Germany
December 13 (King World News) – Egon von Greyerz:  Japan is used as the greatest example of a nation that can survive high debt levels with low Inflation. Unlike the U.S., Japan has a current account surplus and a NIIP of +66% of GDP, which means the value of its foreign assets against its foreign liabilities is positive.

The U.S., however, has a current account deficit and an NIIP that is highly negative at -70%. Japan, moreover, funds its Debt internally via citizen bond buyers, while the U.S. funds its debts externally by, who else: The Fed’s money printer.

Thus, based upon the hard math and stubborn history as to the lessons of nations under the boot of twin deficits, external funding and too much debt, the U.S. is far more reminiscent of Weimar Germany than modern Japan…

Reckless Money Printing Causes Record Breaking Run
Peter Boockvar:  A few weeks ago I included a chart from the Fed’s flow of funds statement that showed net worth (much of which is real estate and the value of stocks and bonds) as a percent of disposable income to highlight the needle the Fed must thread as they tighten monetary policy with a record high in this ratio.

That was for Q2 but today I’m updating it for Q3 as the new data came out last week. The ratio in Q3 went to 796% vs 785% in Q2 and compares with 711% in Q4 2019 before you know what and the peak in the mid 2000’s expansion and housing bubble was 649% and it got to 615% in Q1 2000 in the top of the tech bubble. Bottom line here is can the Fed deflate consumer price inflation without putting a pin in record asset price inflation (API) relative to the underlying economy as reflected here? 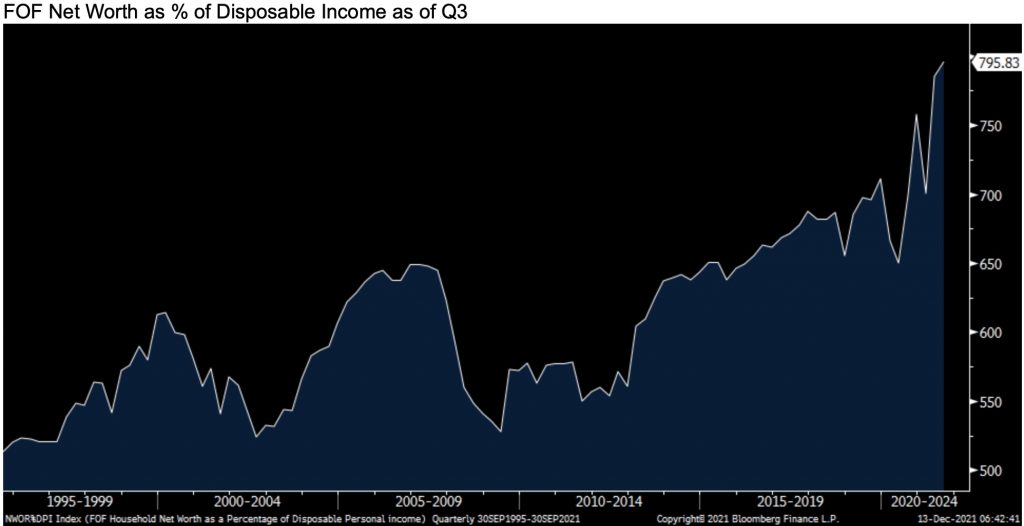 All the forecasters and economists can throw out how many rate hikes we’ll get in the coming years but let’s be honest, much will depend on where the S&P 500 and credit spreads are as we know ‘financial conditions’ are a key part of the Fed’s policy moves. At some point though, it could be an interesting fork in the road where inflation still remains elevated while markets are lower and the Fed might have to make a decision on which turn to make, try to lift stocks or continue its attempt to contain consumer price inflation.

It’s not just the Fed this week that will be making news. We also hear from the ECB, BoE, BoJ, SNB, the Norges Bank, the Bank of Russia, the Mexican central bank and many others. With respect to the BoE, it seems that they will wait again because of omicron even though we’ve seen with each variant that after it spikes up in terms of spread, it then flames out and they’ll be right back to debating rate hikes.

As for commodity prices ahead of this week’s Fed meeting, the CRB raw industrials index is just 2% off a record high…

CRB Only 2% From All-Time Record! 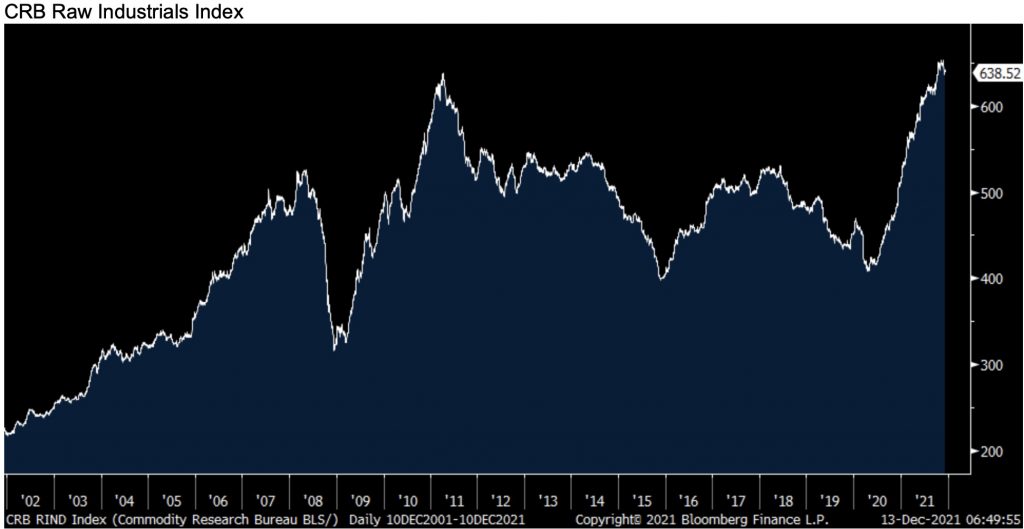 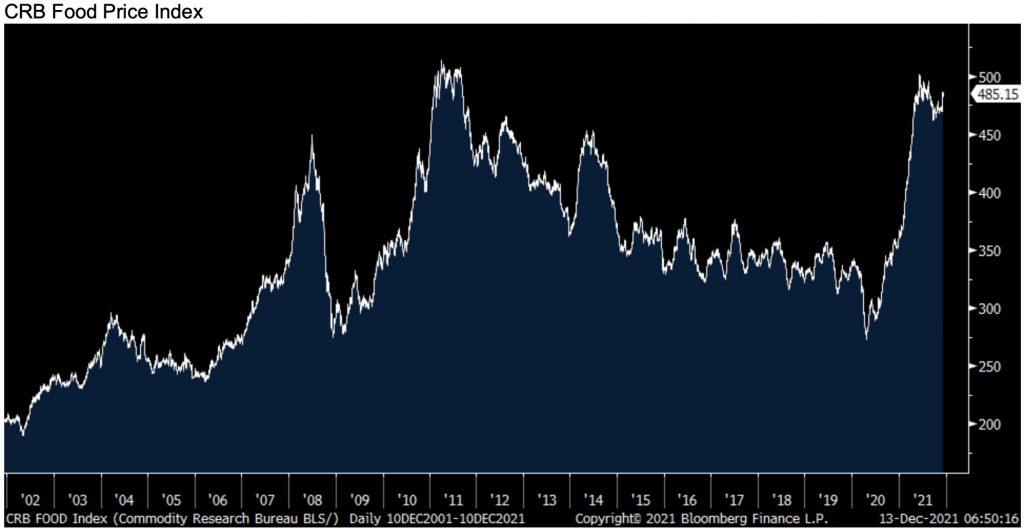 Exploration looks to be just scratching the surface, only ~20% of the vein field strike has been drilled and what has been drilled is open to depth. Drilling is ramping up, with CEO John Lewins indicating drilling is now focused on “resource growth” with up to 11 rigs operating. There are now 4 drill rigs on Judd, which recently reported 211 metres of 20.36 g/t gold along development, with a resource update expected early in the new year.

CEO John Lewins also added that a second drill rig is being added to Judd South and Kora South. This is the first time in the history of the project that the extension of Kora and Judd to the South will be drilled from surface. 2022 looks to be a very exciting year for exploration. K92 Mining, symbol KNT in Canada and KNTNF in the US.