Today the man who has become legendary for his predictions on QE and historic moves in currencies and metals just sent King World News his latest work on currencies, gold, silver, and the coming global economic meltdown.

July 5 (King World News) – Egon von Greyerz at Matterhorn Asset Management (based in Switzerland):  Was Richard Nixon a real gold friend who understood the futility of tying a weakening dollar to gold which is the only currency that has survived in history?

So was Nixon actually the instigator of the movement to FreeGold?

I doubt it. He was just another desperate leader who was running out of real money and needed to create unlimited amounts of fiat money. Although his fatal decision to close the gold window was clearly the beginning of the end of the current monetary system.

But although the decision was fatal, Nixon was clearly not personally responsible. What the world saw in August 1971 was just another desperate leader who realised that he couldn’t stick to the monetary or fiscal disciplines necessary to maintain a sound economy and a sound currency. 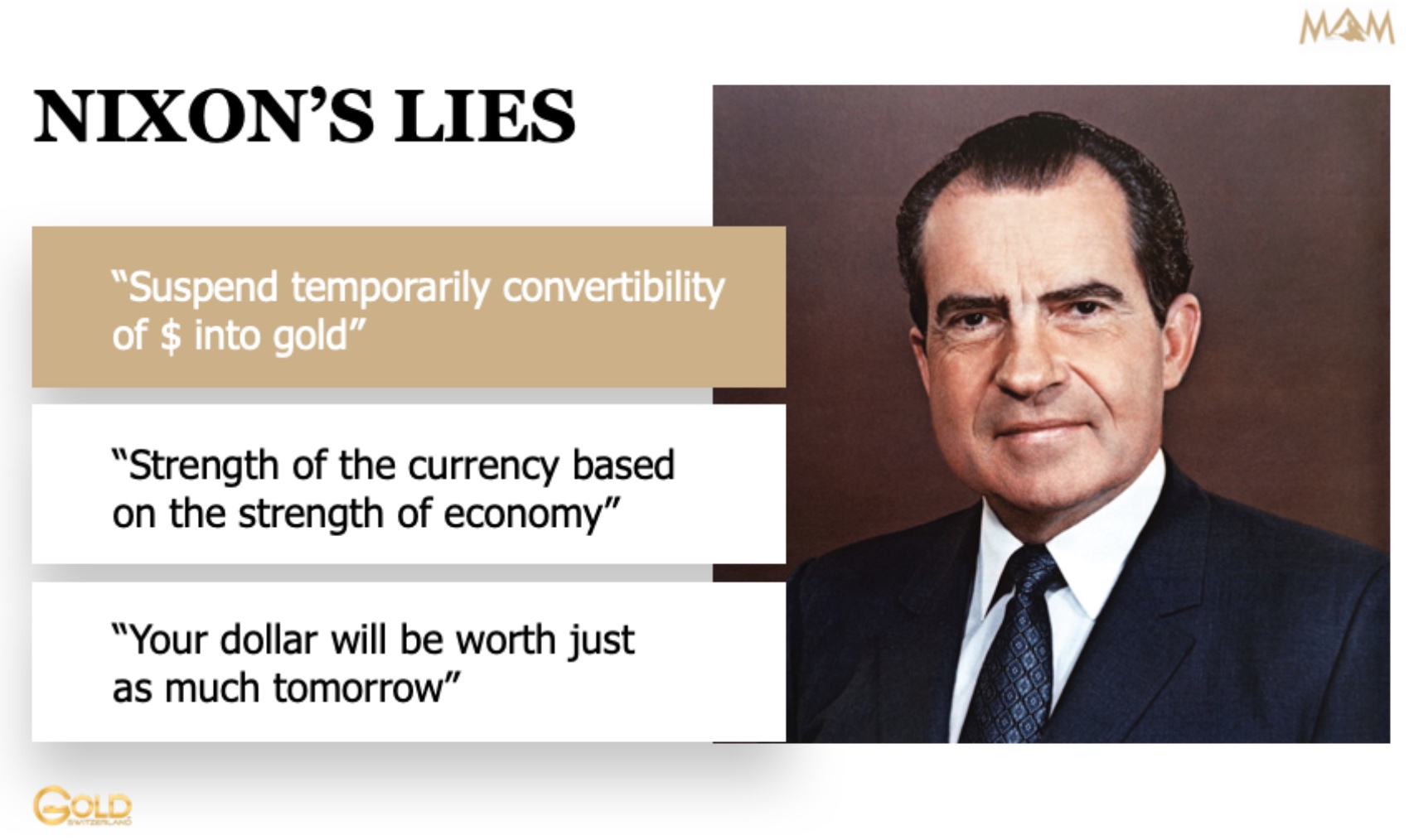 I don’t quite know what the definition is of “suspend temporarily” but 50 years seems pushing the limit!

FREEGOLD
In my article from December 2018 I talk about the advantage of FreeGold (LINK):

There are a few conditions that need to be fulfilled for gold to be an effective store of value. The principle of FreeGold best defines what this means. The website FOFOA (friend of a friend of another) and its predecessors have been pioneers in defining what FreeGold is, as follows:

These are the basic principles-

ALL PHYSICAL GOLD MUST BE:

If all the above conditions are met, there would be no gold backed currencies, no ability to exchange currency for gold at central banks for a fixed parity and most importantly THERE WOULD BE NO PAPER GOLD OR OTHER GOLD DERIVATIVES.

Gold would neither be lent nor leveraged.

In fact, gold should not be tied to any currency. Gold has reigned supreme for 5,000 years whilst all its competitors in the form of fiat money have collapsed. Nixon probably understood this. The world’s current reserve currency could obviously not be shackled any more by gold. Because gold ignores the follies of megalomaniac sovereign leaders who want to cling on to power at any cost.

That is why governments have a Love – Hate relationship with gold….

ON THE ONE HAND – GOVERNMENTS LOVE GOLD
On the one hand gold signifies stability, wealth and the only currency that has survived in history and maintained its purchasing power. That is why governments around the world  allegedly hold 34,000 tonnes of it currently valued at $2 trillion.

As Greenspan said a few years ago:

“If it (gold) is worthless and meaningless, why is everybody (central banks) still holding it?” 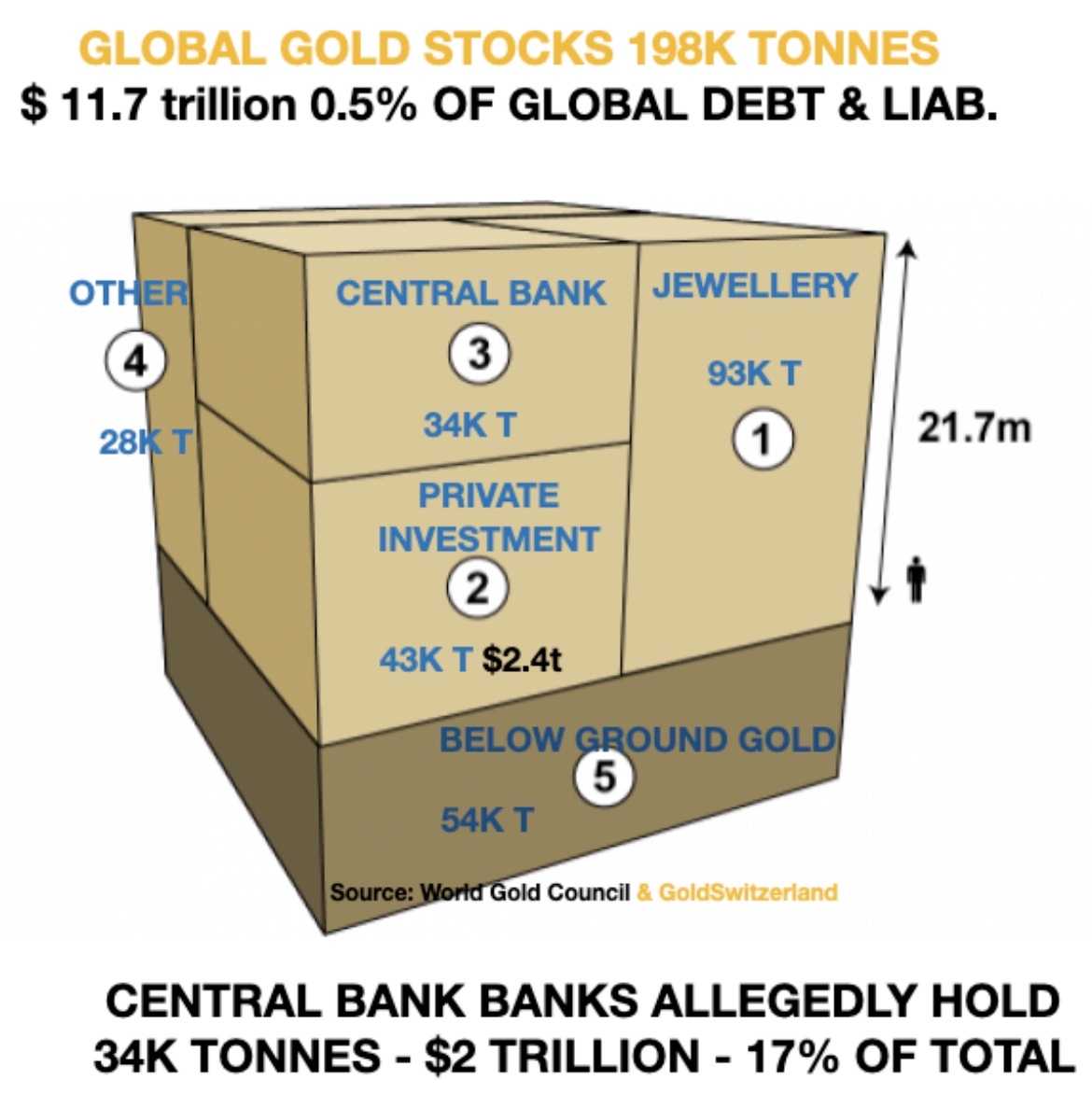 Because as soon as they run out of money, tying the currency to gold creates an extremely inconvenient road block that must be eliminated. As gold is an inconvenient truth sayer, tying it to the currency prevents governments from holding on to power. So out with gold and sound money and in with credit expansion and fake money that temporarily buys votes.

Printing money and buying votes is not just a frivolous folly, but also an extremely costly exercise that without fail leads to the collapse of the economy and the currency.

DOLLAR AND OTHER CURRENCIES CRASHING INTO THE ABYSS
Just look at the picture below showing the crash of the dollar from the peak of the Matterhorn.

So far it is a mere 98% fall since 1971. But that is just the beginning the next move of all the currencies will shock the world as they crash into the abyss. 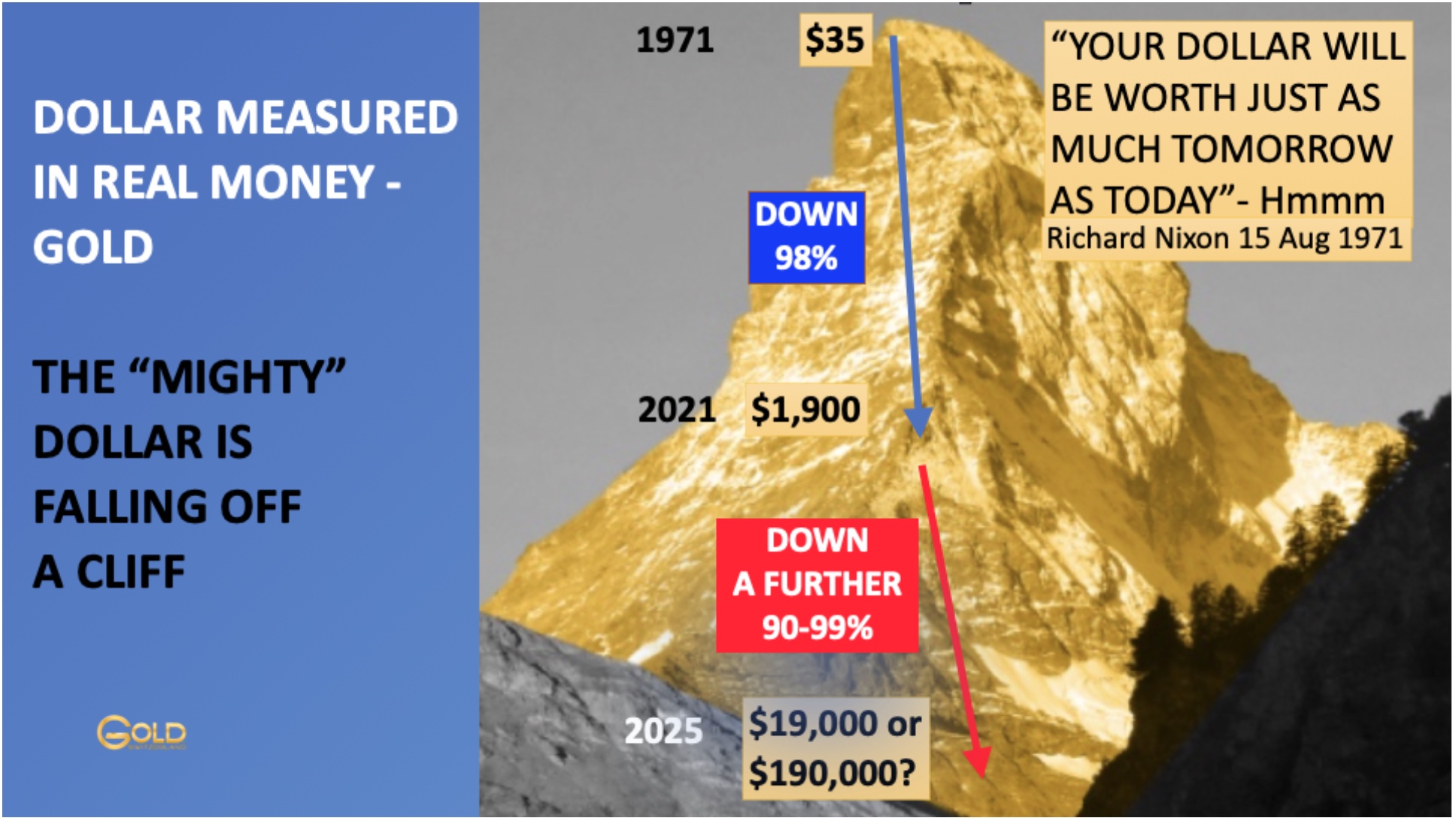 The dollar and all currencies are likely to fall by another 98%+ from here as the world central banks desperately attempt to save the financial system.

Whether that means gold at $1,900 or $19,000 or much, much higher is all a function on the final debasement of the currencies rather than the rise of gold.

NO CURRENCY HAS SURVIVED IN HISTORY IN ITS ORIGINAL FORM
Every currency in history has disappeared or become worthless. There are at least 160 currencies that have died through hyperinflation but the real number is likely to be much higher.

The longest surviving currency today is the British Pound which has been in existence since 1694. At that time one pound bought 12 ounces of silver and today one pound buys 0.05 oz.

So although the pound has survived for over 300 years in name, it has lost over 99.99% of its purchasing power in that time.

BITCOIN – $10,000 NEXT?
For anyone who believes that crypto currencies will take over from gold, they should think again. There are around 10,000 cryptos today and over 1,000 have already died.

Bitcoin is of course the biggest. As I have said before, BTC is a wild binary bet. It can go to $1 million and it can go to Zero. Governments are unlikely to allow it to go to $1 million except for as a collector’s item without any practical use. They are more likely to force it to zero as it is banned by an increasing number of countries.

And anyone who thinks BTC will replace gold must think again. It might be a great speculative investment but it can never be a real store of wealth. And the extreme volatility makes it very unsuitable either as a reserve currency or as a wealth preservation investment.

We have seen $65,000 for BTC this year and now it is down 46% from there. Technically it looks like BTC could go to $10,000. If that will be the case, it will certainly not be suitable for widows or orphans.

HISTORY – HISTORY – HISTORY
Again, history is our teacher. Most sovereign leaders never look at history. Their egos are too big to learn from the past. Instead they suffer from delusions of grandeur and always believe that things are different today just because they are in power.

But if they had one iota of humility, they would learn that there is very little new under the sun when it comes to the laws of nature and sound money.

They can call it by fancy names such as Keynesianism, QE or MMT. But embellishing a “criminal” action with a fancy name doesn’t make it legitimate. What governments are doing with money would put ordinary people in jail.

How can anyone call dollars or euros legal tender when most of it is created without the production of any goods or service.

Money fabricated by pressing a button by an index finger can never be worth more than the cost of moving the finger. Still these small finger movements are generating trillions of dollars, euros, yen, RMB and other currencies in an illusory creation of wealth.

WILL THERE BE A RESET?
I have at various times made my position clear on a reset.

I definitely don’t believe in Klaus Schwab and his cohorts taking over the world in a James Bond style movie. My view that these self-important people will totally fail in any attempt to dominate world politics or the global economy.

The current monetary system has given the 0.1% elite illusory wealth and power. But that is a totally artificial and temporary situation. As the current currency system collapses so will their power and illusions.

Nor do I believe that governments and central banks will succeed in anything but a very temporary reset, if that.  This kind of attempted reset could involve making debt disappear in a hocus pocus move and revaluing gold. Central bank digital currencies would also be introduced.

What they don’t realise is that Humpty Dumpty has already fallen and is irreparable.  Any artificial and fake measures will not ever put Humpty together again.

So the only real reset that I see will be disorderly in a fall of the current monetary system.

Many of my previous articles cover the consequences in detail (Link to additional Egon von Greyerz articles).

As I have outlined, it will be a very unpleasant but temporary period for the world as all the corruption and excesses of the last 100 years are unwound.

But the coming forest fire is essential to get rid of the dead wood so that new green shoots can create a sounder world economy and system. 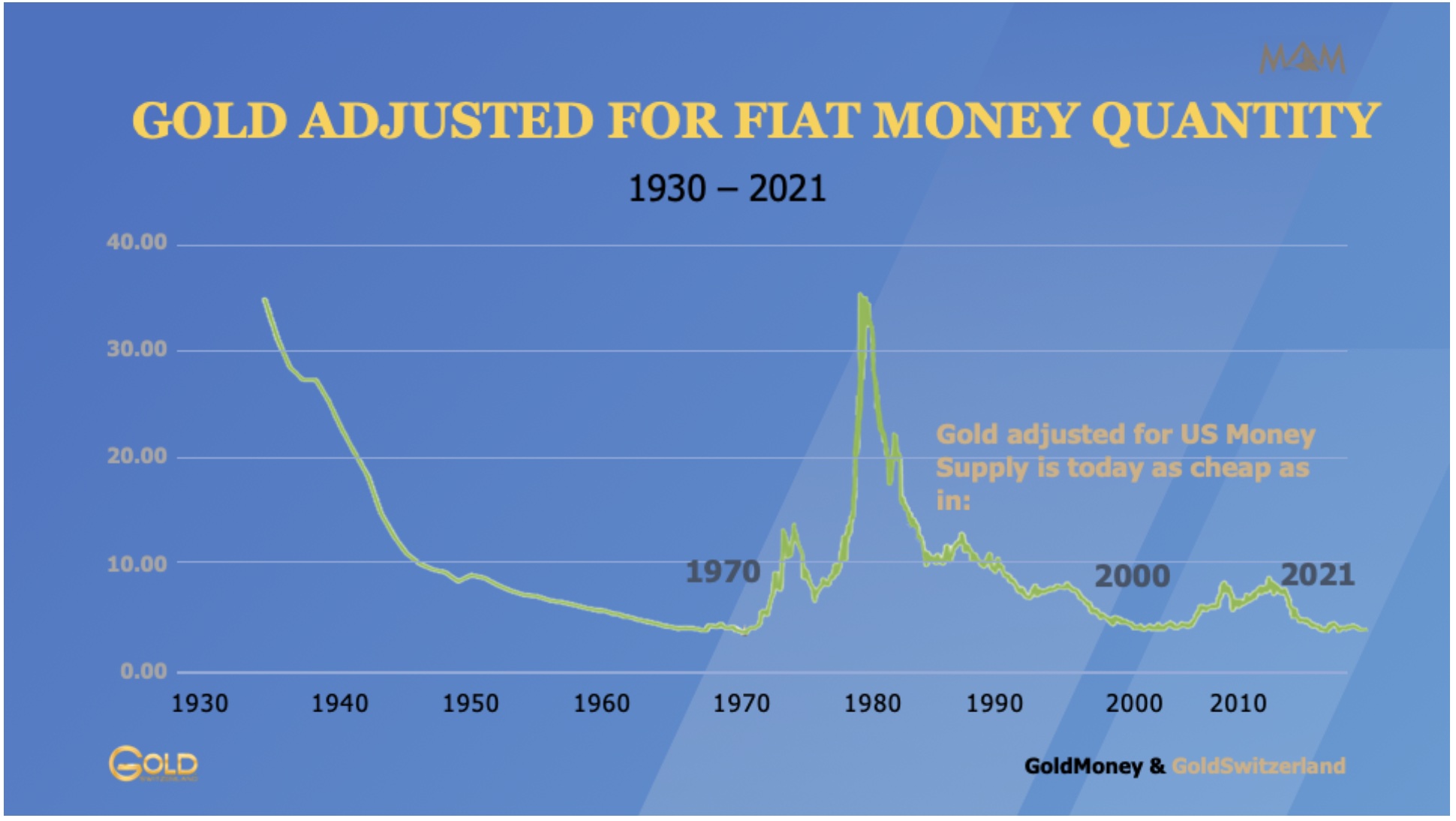 For financial survival, physical gold and silver will be life savers as bubble assets like stocks, bonds and property collapse in real terms…This will link you directly to more fantastic articles from Egon von Greyerz CLICK HERE.