With the Dow plunging nearly 600 and gold surging to $1,250, Michael Oliver, who is well known for his deadly accurate forecasts on stocks, bonds, and major markets, just predicted gold will take out 5 years of highs in only 50 trading days.

Gold will take out 5 years of highs in 50 trading days!
December 7 (King World News) – Michael Oliver:  An outlandish statement? No. And here’s why. The bottom in gold was in 2015 at $1046.  In February 2016 as price moved up through $1140 (arrow), MSA identified a massive annual momentum upside breakout (that momentum chart not shown here). 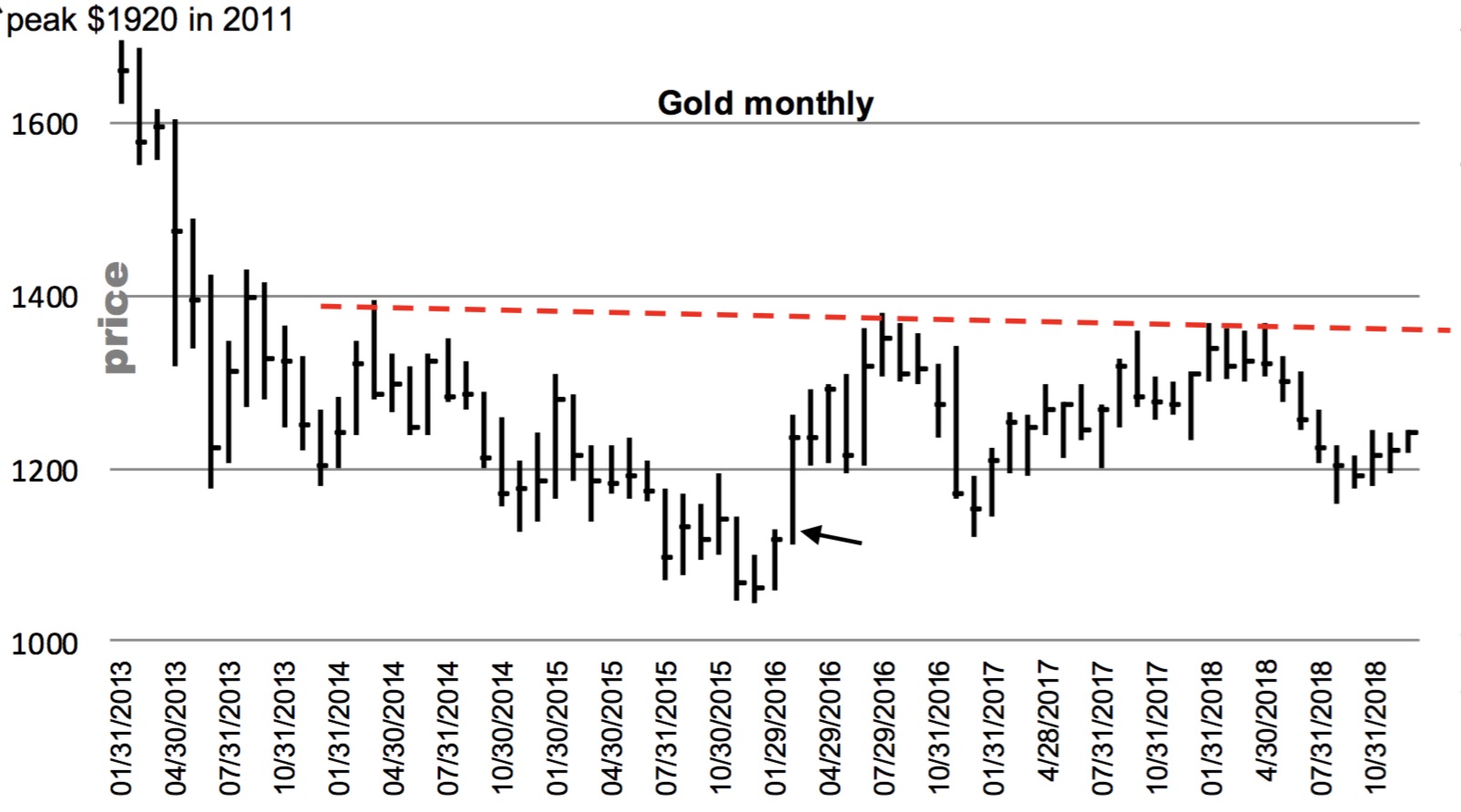 No action by annual momentum since has caused us to shift to bearish on gold.  Yes, there have been large downswings, but never a return to lows in price and no negation of that annual momentum positive signal.  The most recent decline in August reached $1161.  Gold is now near $1250…

Michael Oliver continues:  When you take in the vista of this monthly price chart only, you see a large rangebound clump of ink with downside stabs (no new lows since late 2015) and a nearly flat line of resistance overhead—across the past five years of highs.  And the current price of gold is not near that obvious-to-all line.  So, everyone is asleep.  Ho hum.

For chronic gold bears and chronically nervous gold bulls (who are no doubt less long than they were a year or two ago), the resolution of this struggle should be rapid on the upside.  It will leave no time for committee meetings, no time for sentiments to gradually adjust to the new reality.

Expect A Violent Rise In The Price Of Gold
It is our experience that there are points in trend shifts when a market says, “Enough!” and moves efficiently, rapidly crushing one side or the other.   We’ve seen it happen many times in complex tops and bottoms—at the point where the complexity has lulled everyone to sleep.  This is one of those times.

It will be an upside ambush — getting to and through that publicly-watched line.

Momentum: A different reality from the price chart
The first layer of momentum trend upturn: the parallel channel was broken above in the first week of October (lower circle). 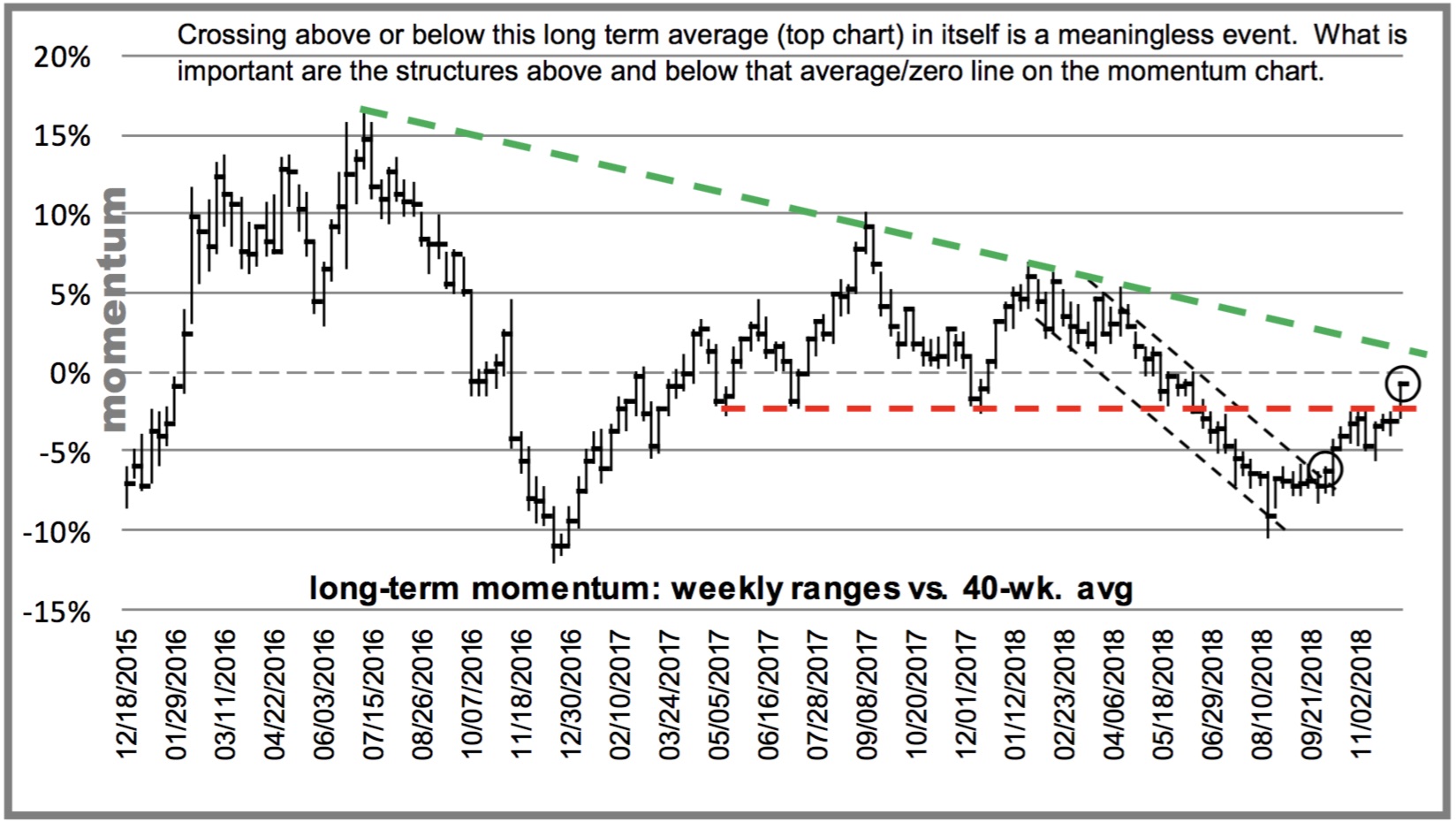 The second layer of upside was signaled this week with weekly close over the major red horizontal structure (second circle)—prior momentum floor now aborted back above (see chart above).

The Final Breakout
The final breakout is a weekly close over that two-and-a-half-year momentum downtrend line, green.  If the front month gold future closes a week going forward in the mid-$1,280s, then that green line will also come out.

However, our banner headline is based on our assessment of the red line breakout.  We think that event alone will provide sufficient power to clear the entire situation on the upside— green line on momentum and the price chartists’ line in the sand in the upper $1,300s.

An examination of the monthly price chart on the prior page does not indicate that many chart watchers will get excited by this week’s close or even something in the $1,280s in the next few weeks either.  The lid only comes off for the orthodox technical analysts somewhere above $1,360.

ALSO RELEASED: Whistleblower Andrew Maguire – A Trip Down The Rabbit Hole Of A Corrupt JP Morgan, US Government, DOJ, And The Greatest Silver Robbery In History CLICK HERE TO READ.