As we come to the end of a week when the price of gold hit a new all-time high, the bullion banks are caught in the mother of all short squeezes in the gold market.

Michael Oliver’s KWN audio interview discussing what to expect next in the gold and silver markets as well as the mining socks has now been released!

Gold In Record Territory
July 31 (King World News) – Alasdair Macleod:  After last week’s spectacular run, gold and silver continued their rise until Tuesday, before consolidating. Gold tested $1980 territory, which is a new all-time high, while silver spiked as high as $26.20. This morning, in European trade gold was at $1976, up $75 from last Friday’s close, and silver up $1.36 at $24.12 on the same time frame. 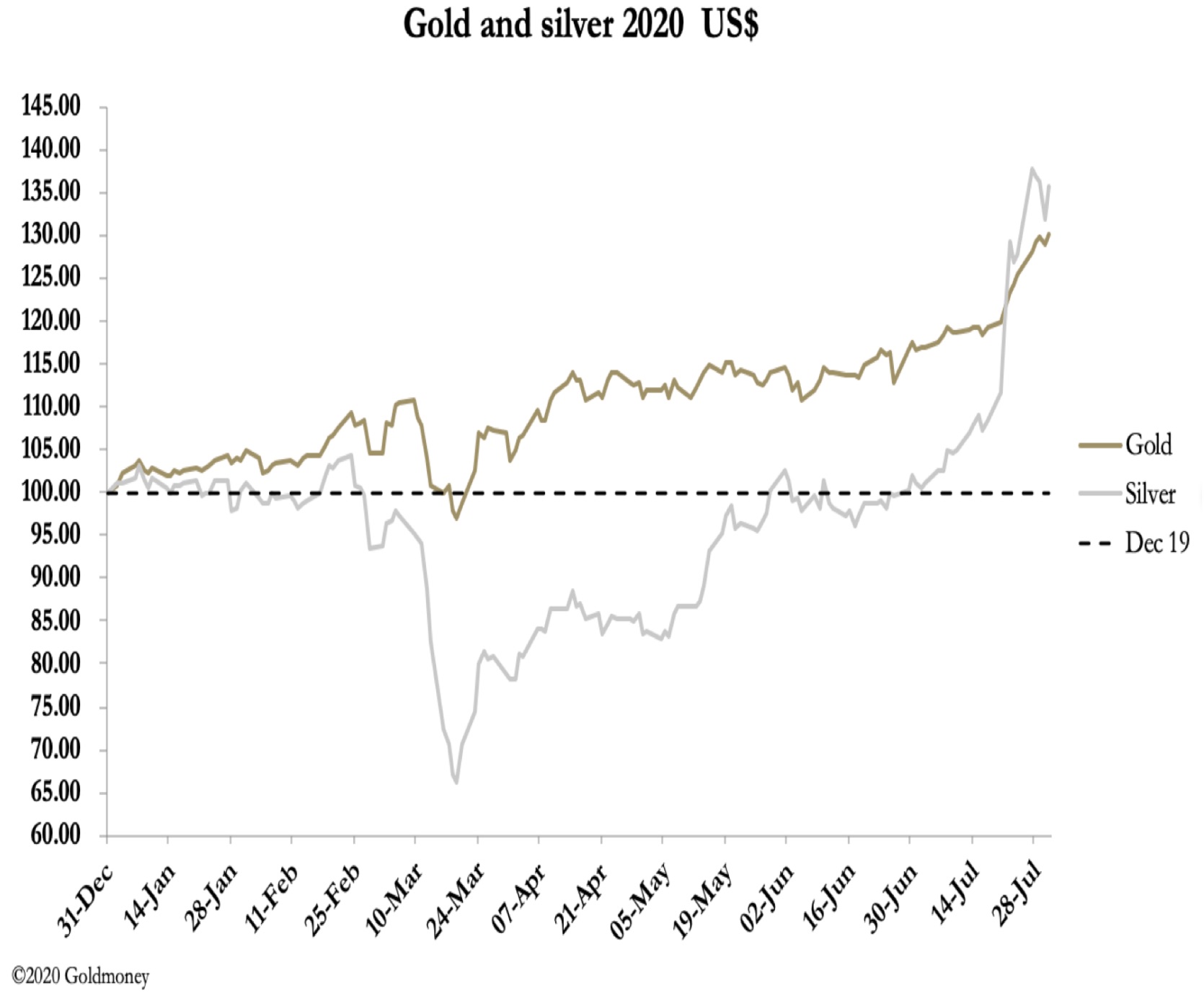 Today is the last trading day for the August gold contract on Comex, and this morning we see that first day delivery is for 32,732 contracts representing 101.81 tonnes. Some of it might be arbitrage, given earlier in this contract’s active life a bullion bank could strip a $20—$30 premium by selling the future and buying spot. But it is an impressive figure, nonetheless.

For the last week or more, gold spot has been at a premium to Comex of up to $5. And given the exchange for physical arbitrage facility is beginning to be used again, the gap would probably have been even more. Therefore, the bullion shortage now appears to have shifted to London, which if true, could be more serious than a Comex squeeze.

Accompanying bullish action in precious metals has been a crashing dollar, which is our next chart. 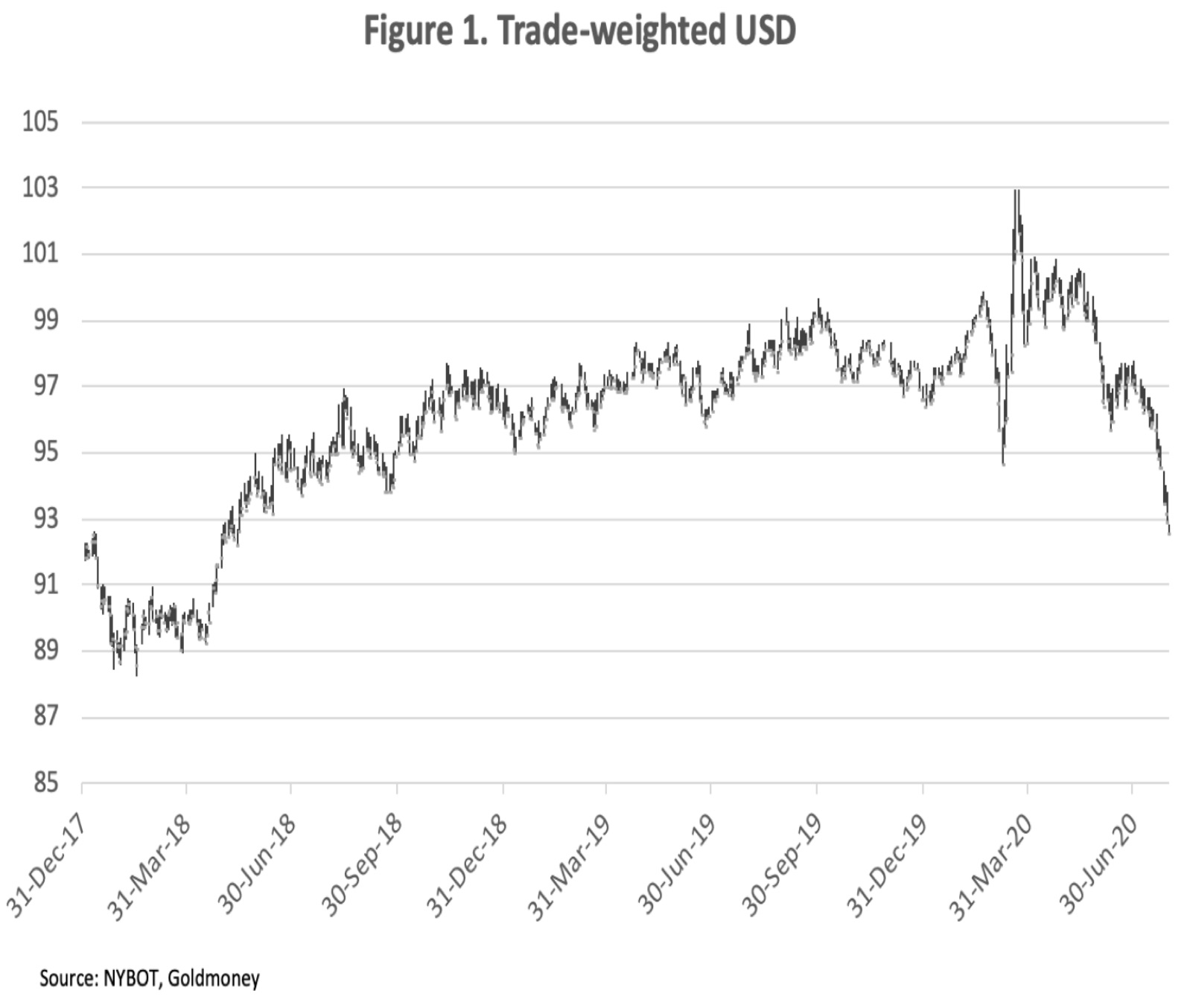 Chartists tell us that the dollar is massively oversold and due for a bounce. While it is not for us to know future prices for certain, it is worth pointing out this premise is flawed. The dollar is falling not due to the speculative forces that on the margin drive charts, but because it is over-owned by foreigners at a time of economic crisis when excess capital engages in flight. Dollar bulls have argued to the contrary, not appreciating that foreigners require dollar liquidity, not huge stacks of illiquid dollars. At the last count, they held roughly $27 trillion in securities (including portfolio investments and US Treasuries), of which $5.5 trillion is in bills and bank deposits. No other currency is exposed to a foreign selling run of this magnitude.

The same chartists tell us that gold is massively overbought. But technical indicators do not show what is actually happening, which is a bear squeeze on the bullion banks with insufficient liquidity to close. Here, for what it’s worth, is a technical chart for gold. 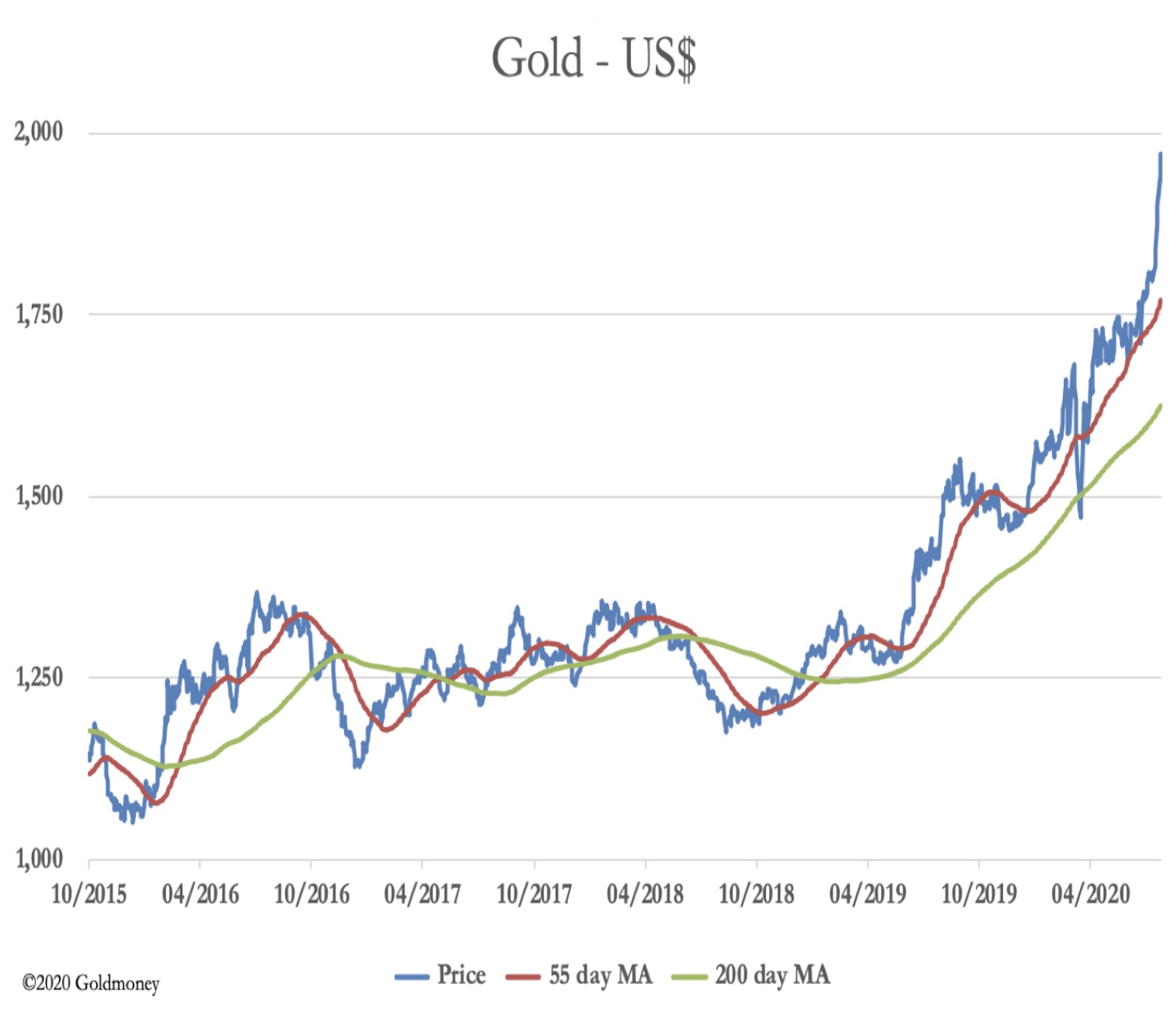 If he were still alive, the legendary trader, WD Gann, would quote his percentage rule, that the targets for a bull market are up 50% and then up 100%, with further targets if appropriate. His 100% target for gold would be twice the bottom, which was $1050, giving a target of $2100. Another of his rules was to never sell short just because it is high.

The underlying problem is lack of physical liquidity in both gold and silver. Furthermore, flows into ETFs, which so far this month have totalled about 165 tonnes, further impact on scarce liquidity.

And lastly, this week the FOMC statement was released, confirming “that in light of continued economic disruption the Fed will increase its holdings of Treasury securities and agency and residential and commercial mortgage backed securities at least at the current pace…”

There is much more monetary inflation to come.

***To listen to one of the most important interviews of 2020 with Michael Oliver click here or on the image below.