The low is now in place for silver but look at these other surprises.

Silver
December 16 (King World News) – Graddhy out of Sweden:  As said, blue line had 13 contact points and was being backtested. We had red positive divergence on indicator. It went briefly below blue line y-day for tag of 21.41 again. And today it gapped up above blue + yellow lines. most probably giving us the daily cycle low. 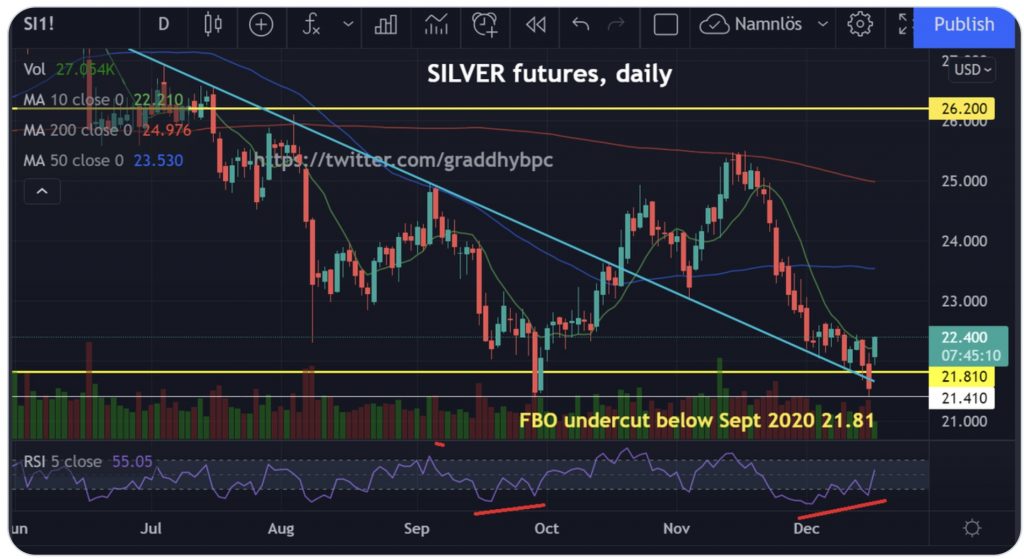 This Is What Is Really Happening
James Turk:  This week is an important one for markets everywhere, Eric. Twenty central banks are meeting to discuss how to manipulate interest rates and continue their policy of financial repression.

Their plans have been well broadcast by the mainstream media. There has been a lot of tough talk about how they are now going to fight the problem they created – inflation.

So before the Federal Reserve meeting, the markets were on edge. But older guys like me remember the October 1979 surprise inflicted by Paul Volcker just a few months after his appointment as chairman of the Federal Reserve. He did what he had to do to fight inflation.

He raised the federal funds rate – which is the interest rate at which banks lend to each other – by an unprecedented 2%. That was the so-called October Surprise that roiled the markets at the time, but that was only the beginning.

Volcker’s mission was to stop inflation, and the only way to do that was raise interest rates. And he kept raising them until the federal funds rate reached a peak of 22% in July 1981.

Volcker Raised Interest Rates Until Fed Funds
Reached A Peak Of 22% In 1981!

He knew that he needed to get nominal rates above the inflation rate, so that real interest rates were not only positive, but high enough to entice people to hold and use inflating dollars, instead of a sound currency like the Deutschemark.

Using gold’s interest rates as a standard, we can deduce that real rates are normally about 1%. Volcker raised them above 6% to convince the market that he was serious in completing his mission.

Because of his persistence in sticking to his mission to stop the inflationary spiral underway, Volcker convinced everyone around the globe that he would indeed end dollar inflation. He saved the dollar from an inflationary spiral that was then building. Contrast his actions to this week’s central bank announcements.

The Federal Reserve says it will raise interest rates next year, and print less fast. The European Central Bank announced it is expanding its bond-buying program to print more rapidly. The Bank of England raised its bank rate from 0.1% to a whopping 0.25%, which is hardly enough to notice when the UK inflation rate by the government’s own admission is over 5%, but is probably in reality close to double-digits.

Each time the Federal Reserve proclaimed that inflationary was transitory, the public lost faith in the dollar and the Fed in view of ever-rising inflation. Its propaganda is designed to maintain confidence in the dollar, but in the face of rising inflation that has been predictable because of its excessive money printing to fund federal government budget deficits, all the Fed has done is reduce the its credibility and annoy everyone who happens to hear the word “transitory”.

Sure, the pandemic and supply chain disruptions have hurt and caused some shortages, but if left to market forces, the supply chain will fix itself. And when it does it will be clear that the cause of inflation is directly tied to the Federal Reserve, which continues to print every month and keep interest rates near zero – the exact opposite of what Paul Volcker did. So we need to keep Milton Friedman’s words foremost in mind: “Inflation is always and everywhere a monetary phenomenon.”

Trying To Keep A Broken Monetary System From Collapsing
So we can expect two things to happen. First, inflation will continue to worsen. Second, to try keeping a broken monetary system from collapsing into an inflationary spiral, there will be more regimentation that erodes liberty and free markets.

It doesn’t have to be that way. All we need to do is once again follow the monetary provisions of the Constitution. We need to recognise that nature provides everything humanity needs to advance, including money. Gold is nature’s money, as I explain in “Money and Liberty: In the Pursuit of Happiness & The Theory of Natural Money”.

Until government and political leaders understand that “money is gold, and nothing else”, as J.P. Morgan told Congress in 1912, prepare for more inflation by buying physical gold and physical silver.

Gold Will Be A Necessary Part Of The New Monetary System