Expect even more money printing as big moves in global markets unfold, plus another catalyst for higher gold and silver prices.

Big Moves Are Happening In Global Markets
June 2 (King World News) – Peter Boockvar:  The German DAX is leading the way today as Chancellor Merkel is said to be lining up another round of fiscal spending.

That story came out a few days ago but more details might be revealed today with this tranche totaling between 50-100b euros. The money could be utilized in a variety of ways such as a ‘cash for clunkers’, adding to the wage pay support program in addition to cash to municipalities, maybe directly to families and tax breaks for companies.

Add this to the 750b euro plan the EU is trying to put together and the euro is rallying for a 6th straight day to just below $1.12, the highest vs the dollar since mid March. The dollar by the way is weak across the board. The euro heavy dollar index is actually no higher than where it was in 2015. Exploding US debts and deficits is long term dollar negative.

The Aussie$ is quietly rallying to the highest level since mid January vs the US dollar. 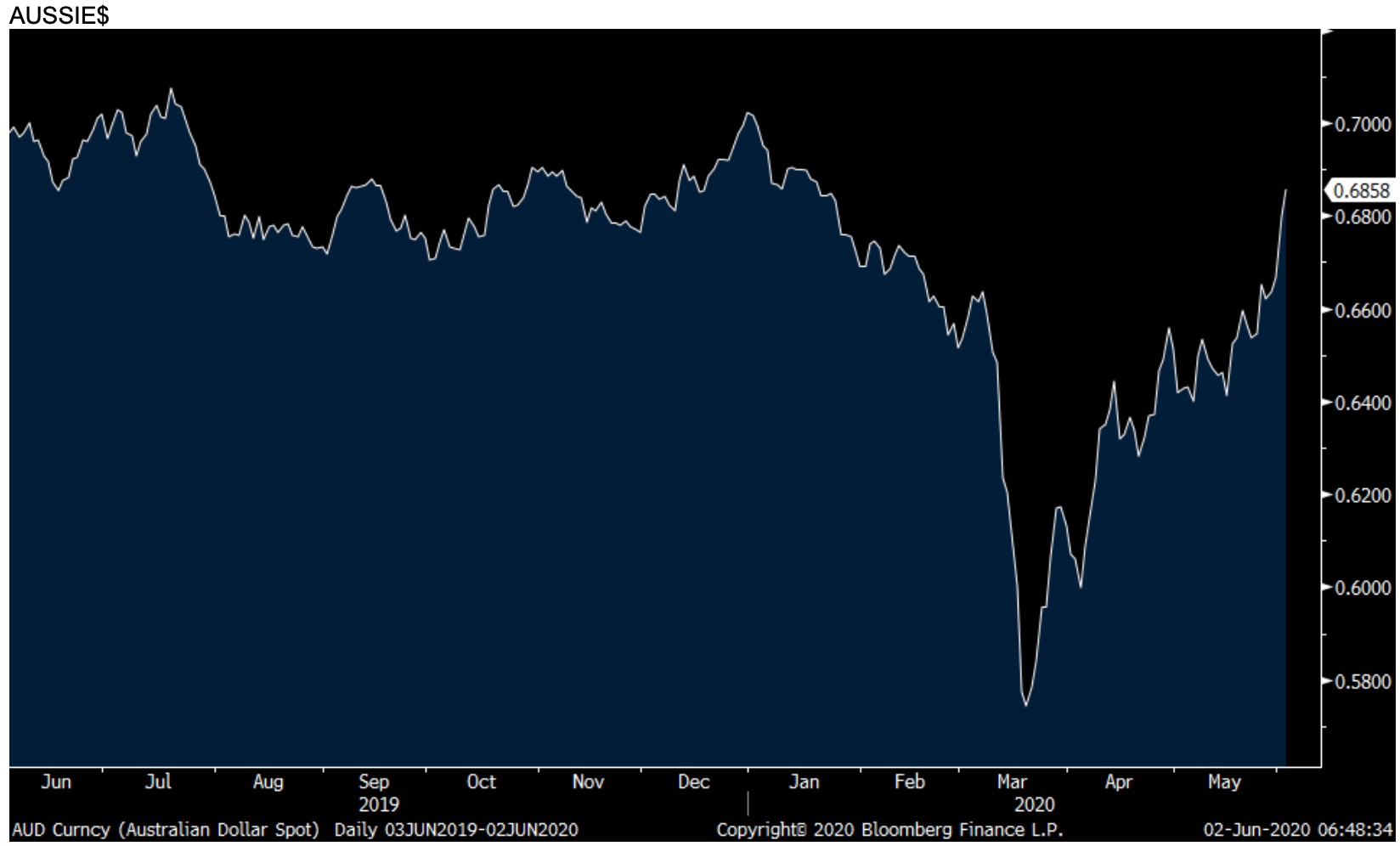 This is a country highly dependent on the economic ups and downs of China along with being a commodity powerhouse. The Reserve Bank of Australia kept rates at a record low of .25% but highlighted the green shoots:

“It is possible that the depth of the downturn will be less than earlier expected. The substantial, coordinated and unprecedented easing of fiscal and monetary policy in Australia is helping the economy through this difficult period…The rate of new infections has declined significantly and some restrictions have been eased earlier than was previously thought likely. And there are signs that hours worked stabilized in early May, after the earlier very sharp decline. There has also been a pick up in some forms of consumer spending.”

Another Catalyst For Higher Gold & Silver
This dollar weakness is another support to gold and silver, along with low real rates…

I expect commodities generally to be helped by this, particularly crude and copper, along with the growing supply demand imbalances that are setting up for the next few years. With oil, the front month WTI contract is at the highest level since early March as it looks like OPEC and Russia are going to renew their production cut agreement by another month.

US Treasuries
This said about the weaker dollar and the inflation that I see coming, along with an S&P 500 above 3000, I’m still amazed that the 10 yr Treasury yield is still only at .67-.68%.

Either the stock market is dead wrong about its belief of a firm economic rebound or Treasuries are a huge short. Or maybe we’re headed for some mean reversion for both. I’ll argue for that looking at the 2nd half of 2020.