Trade Deal Fails To Ignite
January 17 (King World News) – Ole Hansen, Head of Commodity Strategy at Saxo Bank:  While global stocks, led by the U.S. technology sector, continued their ascent, the first two weeks of trading have been more challenging for several commodities. While metals, both industrial and precious, have recorded early January gains both energy and agriculture have struggled. Following a strong December, the Bloomberg Commodity Index which tracks the performance of 22 major commodities has now recorded two straight weeks of losses and is currently down by 1.6% so far this January.

During the past two weeks, the market has reacted to major events such as the temporary flare up in Middle East tensions and the signing of the U.S.-China trade deal. The U.S. killing of a top Iranian general created a short-term worry and Brent crude oil spiked above $70/b before returning to the mid-60’s as tensions eased. Gold meanwhile surged past $1600/oz before quickly returning to the current level around $1550/oz. Both a reminder that a real disruption and with that a real threat to peace is needed for gains in both to be sustained. 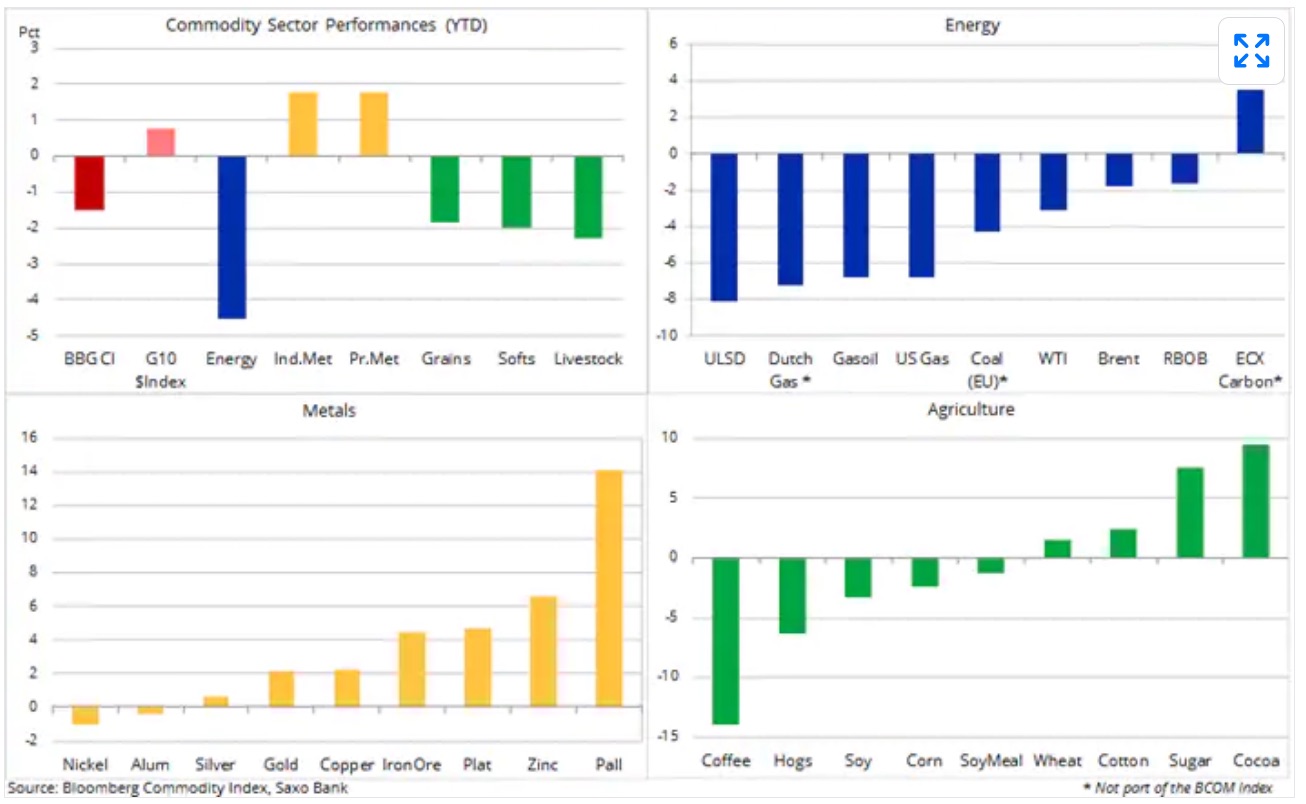 This past week however, it was the signing of the phase 1 trade deal between the U.S. and China that attracted most of the attention. The very lukewarm response across commodities, that stands to benefit from the expected and dramatic pick up in Chinese buying, spoke volumes about the unease in the market about whether this deal is workable or not. In order for the Chinese to buy more U.S. produced oil, gas, soybeans and other commodities, other suppliers will have to suffer.

This comment in the China Daily highlighted the risk and also the reason why the market has responded with a lot of caution. In an article entitled “US faces pressure to increase exports” they wrote: “Most (Chinese) import companies are private, and many are foreign-funded. The Chinese government cannot give orders to these companies. In addition, consumers will not buy products out of political considerations. The US is clear about all of these facts.”. In addition, Reuters reported Vice Premier Liu He saying that China’s other suppliers of agricultural commodities will not be impacted since the buying will be based on market principles.

These comments only leave one route for US producers. They have to be price competitive, something that poses a challenge. An example being soybeans with rising production in Brazil – China buys 80% of Brazil’s soybean export – and a BRL near a record low making Brazilian beans more competitive. The front month soybeans futures contract in Chicago reached an 18-month high on December 31 but has since fallen back with selling accelerating following the signing of the deal. 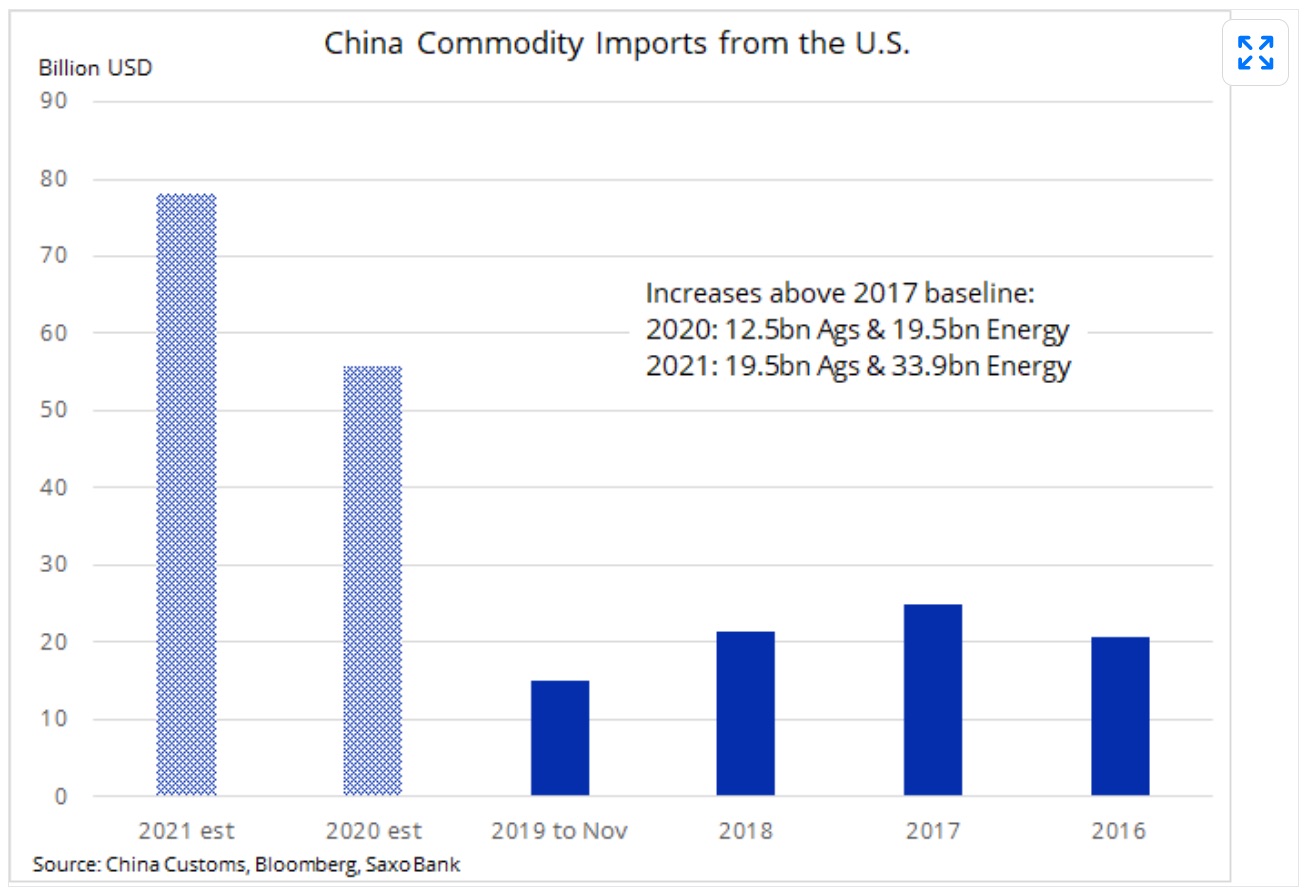 Crude oil stabilized following the U.S. – Iran de-escalation slump with Brent crude oil settling into a range around $65/b. While the agriculture sector hesitated about the impact of the U.S.-China trade deal, crude oil managed to find a small bid. This, given hopes that the more conciliatory approach between the world’s two biggest economies, would help stabilize and potentially revive growth and demand for procyclical commodities such as oil.

Countering the optimism was another big jump in U.S. stockpiles of oil related products. While being mostly explained by seasonal behaviors it nevertheless raised some concerns about demand. The three major forecasters of EIA, IEA and OPEC all released their monthly oil market reports. They all highlighted OPEC’s current dilemma with rising non-OPEC production forcing the OPEC+ group to keep production tight.  While OPEC raised non-OPEC production in 2020 to 2.35 million barrels/day, the IEA kept it unchanged at 2.1. Global demand growth is expected by both to be around 1.2 million barrels which will continue to leave the market oversupplied, especially during the first half of 2020.

Brent crude oil found support after surrendering half the October to earlier January gains. The short-term outlook points to rangebound trading between $63/b and $68/b, barring any renewed threat to supplies from the Middle East and especially Libya. On January 23, Saxo Bank will release its Q1 Outlook entitled “The Great Climate Shift” and in it I will highlight some of the reasons why we see Brent crude oil potentially finish 2020 at $75/b.

Look For Much Higher Oil Prices In 2020 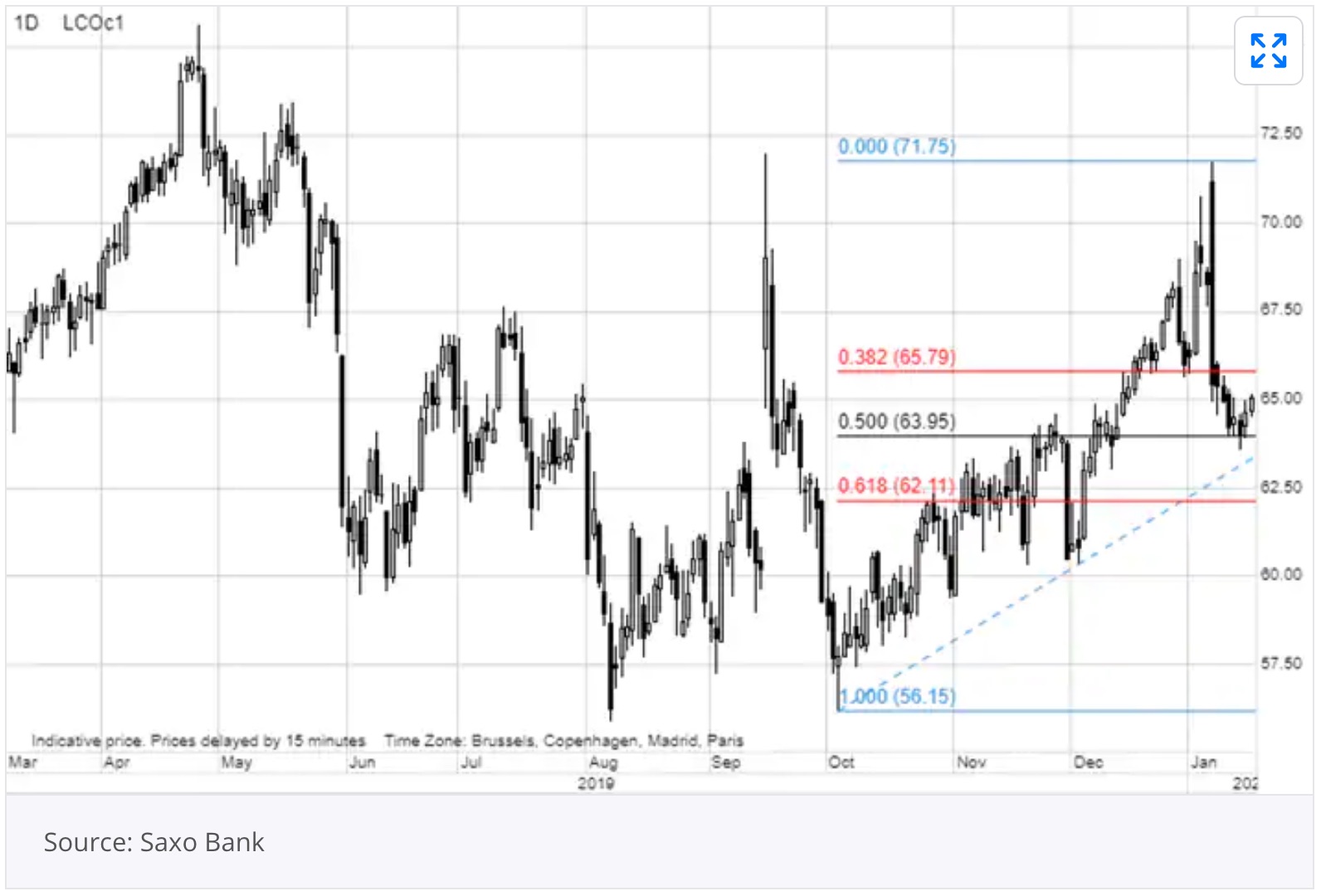 Platinum broke above $1000/oz to reach the highest level since September 2016. The rally was supported by palladium which has already added 14% to the 55% it gained in 2019. Palladium’s rally towards $2400/oz has been driven by supply deficits and surging demand on tightening emissions regulations. However, a widening premium to platinum of more than 1350 dollars has started to attract speculative buying of platinum on the assumption that carmakers may begin to substitute the two metals.

Gold has settled into a relatively tight range around $1550/oz following the failed January 8 spike above $1600/oz. Just like last year the yellow metal has so far managed to find support relatively soon following a push to a fresh high. It highlights the continued focus on gold as a portfolio insurance against a change in the current direction of stocks and bonds. We have reached a situation where rising stock prices drive rising gold prices as investors, while maintaining exposure to stocks, become increasingly concerned about the risk of a correction.

Bridgewater Says Gold May Surge To Record $2,000
Supporting the bullish sentiment was comment from Bridgewater, the world’s largest hedge fund, that gold could surge to a record high above $2000/oz. The reasons being the same we have highlighted during the past few months. Real yields look set to fall further as Central Banks keep rates low despite rising inflation pressures. Adding to this political uncertainty, the risk of renewed U.S. – China trade worries, the potential for a weaker dollar and elevated stock market valuations.

We maintain a bullish outlook for gold but sense a potential prolonged period of consolidation which could result in some profit taking driving gold lower towards support, currently located at $1535/oz followed by $1520/oz. Longer term bulls are unlikely to worry unless the price breaks below the late 2019 consolidation low below $1450/oz. 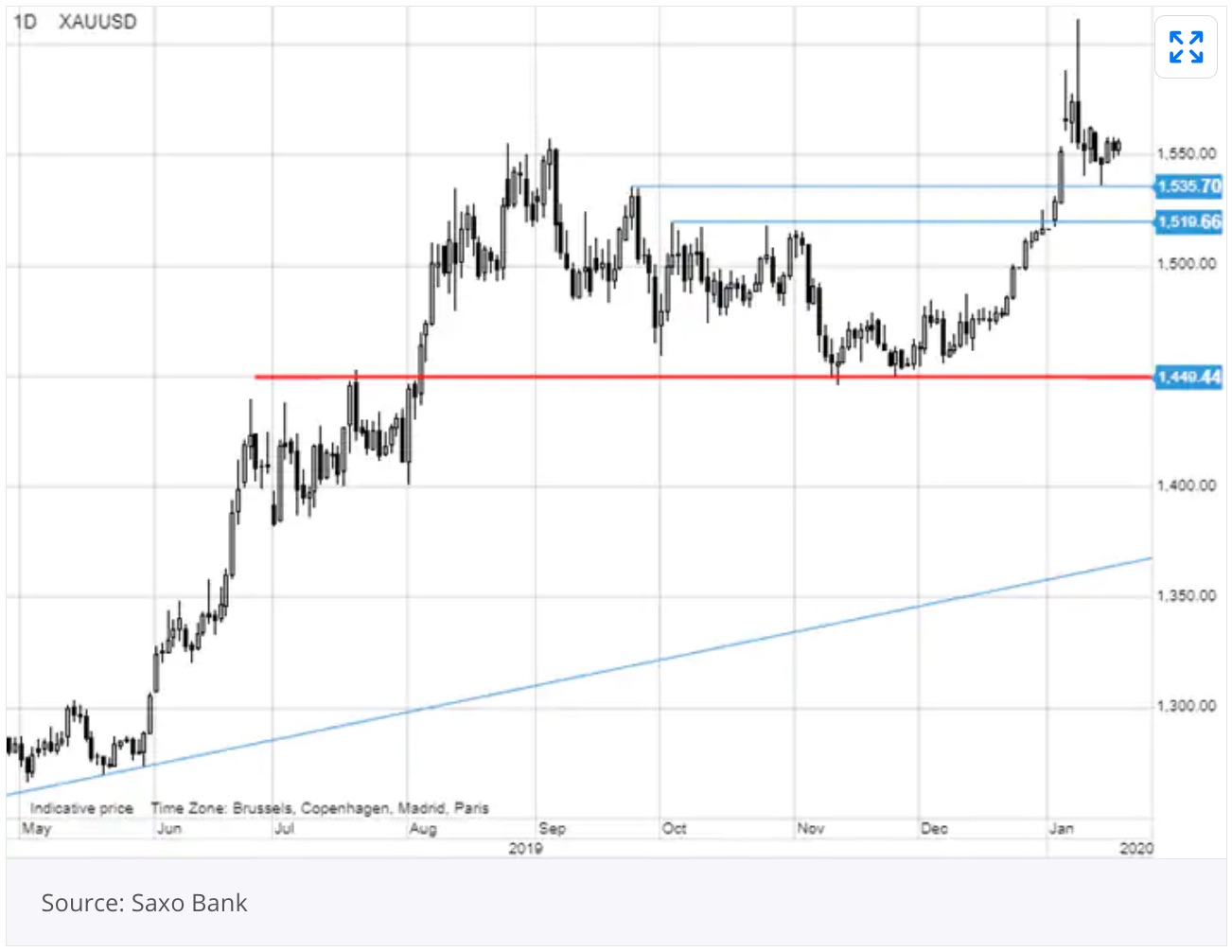 Summary:
Commodities with the exception of metals struggled to get excited about the phase 1 U.S. China trade deal. Questions regarding China’s ability to buy the stipulated quantities of agriculture products added some downside pressure to grains. The energy sector was weighed down by ample supply as geopolitical risks continued to fade.