With countries around the globe experiencing fiat destruction and massive inflation, there is no question now that all twisted roads lead to gold.

Latest Treasury, Fed and BIS Reports Confirm: Lying is the New Normal
November 17 (King World News) – Matthew Piepenburg at Matterhorn Asset Management (based in Switzerland):  In a recent article, I posed the rhetorical question of when will policy makers finally stop lying and allow honest facts and natural market forces to return?

Unfortunately, as we examine the two latest working papers from the Fed/Treasury Dept cabal and the Bank of International Settlements, each confirms that lies are officially the new normal.

Over the years, we’ve tracked popularized delusions masquerading as policy with evidence rather than awe, addressing such topics as the open fictions of CPI inflation reporting and its “transitory” myth to the latest sample of double-speak spewing out of the Fed or White House.

Frankly, these well-masked fibs happen so frequently we never run out of material, including Biden assuring us earlier—and once again last week– of an “independent Fed.”

He’s trying a bit too hard to convince us, no?

History (Debt) Repeating Itself
History’s patterns confirm that the more a system implodes under the weight of its own self-inflicted extravagance (typically fatal debt piles driven by years of war, wealth disparity, currency debasement and political/financial corruption), the powers-that be resort to increasingly autocratic controls, distractions and automatic lying…

The list of such examples, from ancient Rome, 18th century France, and 20th century Europe to 21st century America are long and diverse, and whether it be a Commodus, Romanov, Batista, Biden, Franco or Bourbon at the helm of a sinking ship, the end game for bloated leaders reigning over bloated debt always ends the same: More lies, more controls, less liberty, less truth and less free markets.

As promised above, however, rather than just rant about this, it’s critical to simply show you. As I learned in law school, facts, alas, are far more important than accusations.

Toward that end, let’s look at the facts. 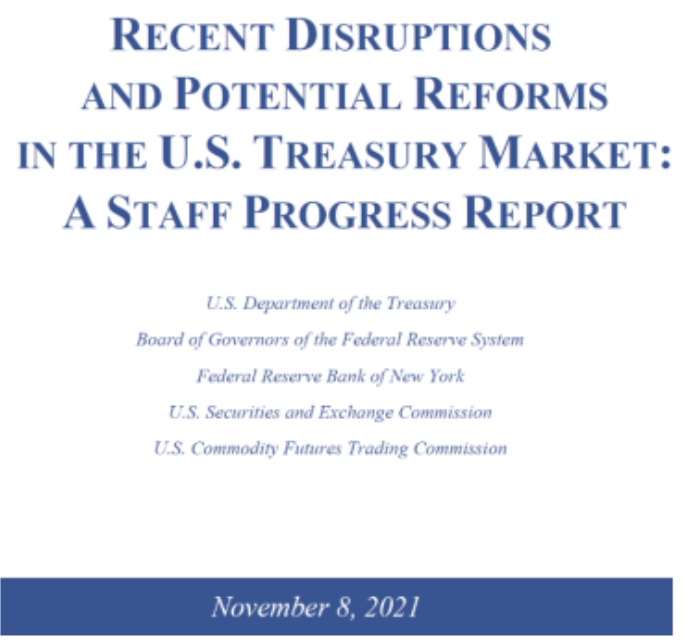 The first thing worth noting are the various “authors” to this piece of fiction, which confirm the now open marriage between the so-called “independent” Fed and the U.S. Treasury Dept.

If sticking former Fed Chair, Janet Yellen, at the helm of the Treasury Department (or former ECB head, Mario Draghi, in the Prime Minister’s seat in Italy) was not proof enough of central banks increasingly centralized control over national policy, this latest puff-piece from the Treasury and Fed ought to help quash that debate.

In the report above, we are calmly told, inter alia, that the U.S. Treasury market remains “the deepest and most liquid market in the world,” despite the ignored fact that most of that liquidity comes from the Fed itself.

Over 55% of the Treasury bonds issued since last February were not bought by the “open market” but, ironically, by private banks which misname themselves as a “Federal Open Market Committee” …

The ironies (and omissions) do abound.

But even the authors to this propaganda piece could not ignore the fact that this so-called “most liquid market in the world” saw a few hiccups in recent years (i.e., September of 2019, March of 2020) …

Translated Confessions of a Fake Taper
The cabal’s deliberately confusing response (and solution), however, is quite telling, and confirms exactly what we’ve been forecasting all along, namely: More QE by another name.

Specifically, these foxes guarding our monetary hen house have decided to regulate “collateral markets and Money Market Funds into buying a lot more UST T-Bills” by establishing “Standing Repo Facilities for domestic and foreign investors” which are being expanded from “Primary Dealers” to now “other Depository Institutions going forward” to “finance growing US deficits” by making more loans “via these repo facilities (SRF and FIMA).”

Folks, what all this gibberish boils down to is quite simple and of extreme importance.

In plain speak, the Fed and Treasury Department have just confessed (in language no one was ever intended to understand) that they are completely faking a Fed taper and injecting trillions more bogus liquidity into the bond market via extreme (i.e., desperate) T-Bill support.

Again, this is simply QE by another name. Period. Full stop.

The Fed is cutting down on long-term debt issuance and turning its liquidity-thirsty eyes toward supporting the T-Bill/ money markets pool for more backdoor liquidity to prop up an otherwise dying Treasury market.

Again, this proves that the Fed is no longer independent, but the near exclusive (and rotten) wind beneath the wings of Uncle Sam’s bloated bar tab.

Or stated more simply: The “independent” Fed is subsidizing a blatantly dependent America.

Biden Doubles Down on the Double-Speak
Of course, as evidence of increasingly Fed-centralized control over our national economy now becomes embarrassingly obvious (yet deliberately hidden in “market speak’), it was imperative to roll out Biden from his nap-time and compel him to say the exact opposite.

In other words: Cue the spin-selling.

Just 2 days after the foregoing and joint Fed/Treasury “report” went public, the U.S. President, talking points in extra-large font on his prompt-reader), announced that he is “committed to the independence of the Fed to monitor inflation and combat it.”

First, it’s now obvious that the Fed is anything but independent. They might as well share the same office space as the Treasury Dept.

Second, the way the Fed “monitors” (aka: lies about) inflation has been an open joke for years.

Inflation, as accurately measured by the 1980’s CPI scale, is not at the already embarrassing 6% reported today, but more honestly at 15%. 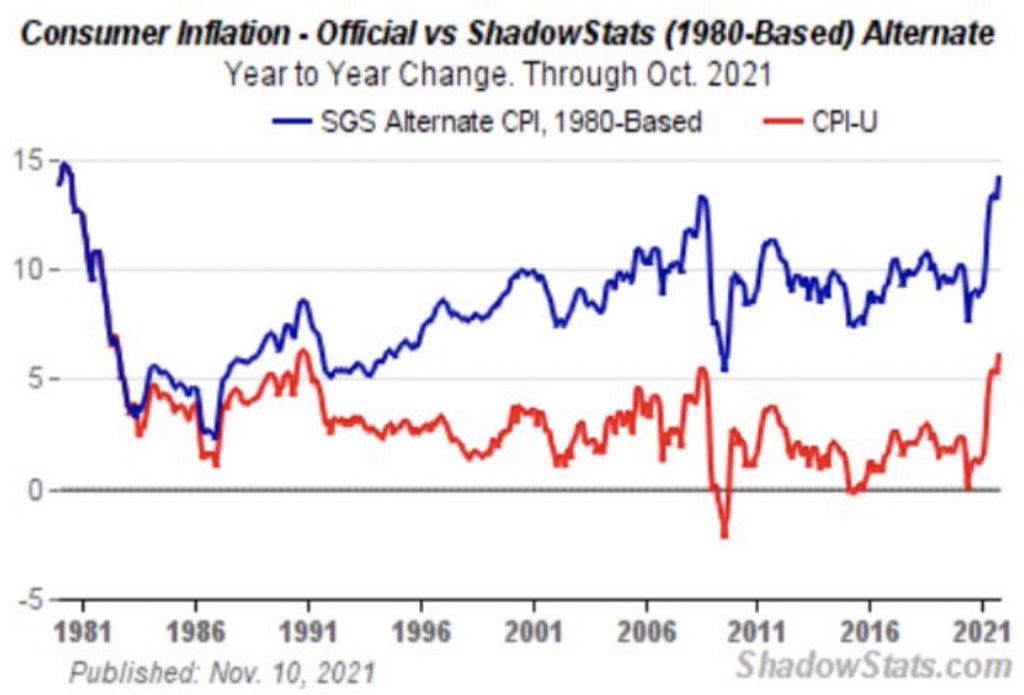 Ouch. When compared against a current 1.6% yield on the 10-Year UST, that means the most important bond in the global economy is offering you a real yield of negative 13.4%.

Think about that for a moment…

Thirdly, the Fed is not about “combating” inflation, but rather encouraging more of the same to inflate away debt via negative real rates, as we’ve warned all year.

In short, if Biden or other political puppets spoke plain truth as opposed to optic spin, his words would translate as follows:

“We are committed to unfettered dependence on the Fed to subsidize our debt and lie about inflation while encouraging more of the same.”…

Yellen—The Queen of Lies
Meanwhile, Yellen chirps in during that same week promising to never allow a repeat of the 1970’s inflation level.

Again, nice words; but when using the same CPI scale to measure inflation that was used in the 1970’s, the U.S. is already experiencing 1970’s like inflation.

Recently, of course, Yellen openly blamed all our inflation problems on COVID rather than her own reflection.

Again, the ironies do abound.

Now, on to more acronyms and more, well, lies from above…

Enter More BS from the IBS as to CBDC
As if the spin coming out of DC was not enough to upset one’s appetite for candor, the Bank of International Settlements (BIS) has been busy telegraphing its own move toward more globalized central controls under the guise of a Central Bank Digital Currency, or “CBDC.”

And here’s the BIS’s own graph (or skunk in the woodpile) to prove we’re not making this crazy up:

This literally confirms that despite Yellen, Biden and Powell’s recent promises to “combat” inflation (which they hitherto denied even existed), the BIS is now anchoring a new (i.e., more fiat) digital currency system which will send inflation to the moon—not to mention control and monitor the way consumers receive, use and spend “money.”

Of course, this is just wonderful for the centralized power brokers. In one CBDC “swoop,” they can now create inflation while controlling consumers at the same time.

Welcome to the new normal.

Thus, when it comes to the banking elite, it’s far safer to watch what they’re doing rather than trust what they’re saying.

As we’ve warned for months, the banking/political cabal want more not less inflation.

Because that’s what all historically debt-soaked and failed regimes have wanted and done for centuries—inflate their way out the debt hole they alone dug.

All Twisted Roads Lead to Gold
Needless to say, more liquidity, and more inflation, joined by more rate repression, truth destruction and currency debasement means gold’s recent bump north is just the beginning of the ride up and to the right for this “barbarous relic.”

As we’ve said with consistent conviction and hard facts, not to mention spot-on inflation reporting, gold’s golden era has yet to even begin.

As global currencies fall deeper toward the ocean floor in a sea of excess liquidity, gold, like a cork, makes its way to the surface to get the final word.

In short: It’s not that gold is getting stronger, it’s just that the currency in your wallet, bank and portfolio is getting weaker. 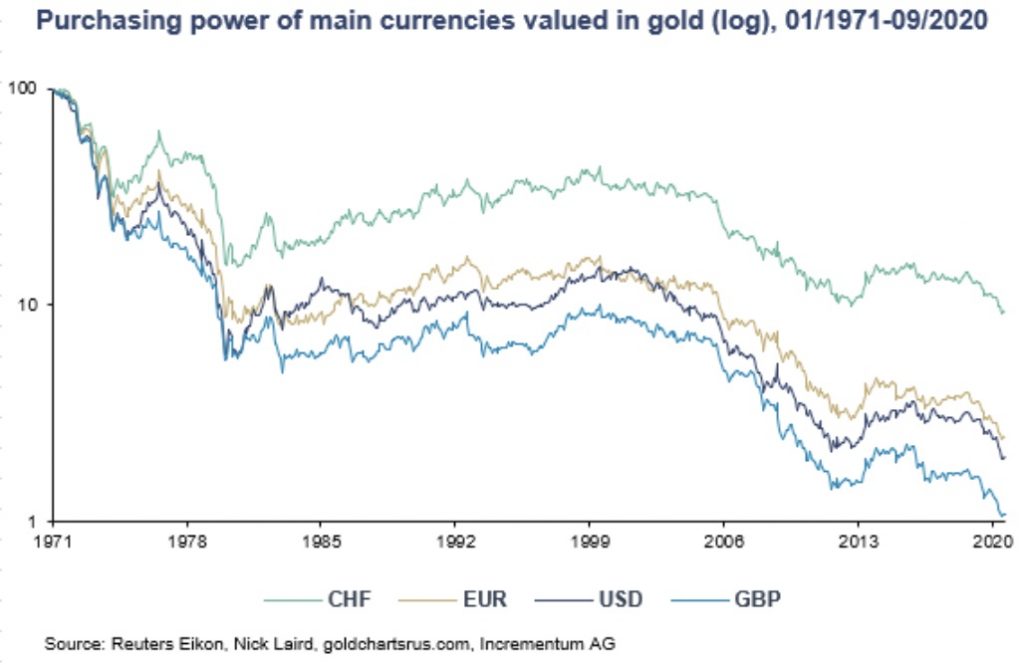