Look at what India’s Gold Policy Centre just said about gold, plus this is why a massive 5-10X gold revaluation is coming.

India GPC On Gold During Crises
August 12 (King World News) – Statement from India’s Gold Policy Centre:  “Specifically, we examined the effect of central gold holdings on a country’s risk during episodes of high global volatility, as well as country-specific debt crises, inflation crises, and currency crises episodes. Sovereign CDS quanto spreads indicate the financial markets’ view of the interaction between a country’s likelihood of default and associated currency devaluations. We show that increased central bank gold holdings not only help reduce a country’s credit risk during normal times, but also mitigate the effect of global and domestic crisis on sovereign creditworthiness.”…

Otavio Costa:  Precious metals are now at their cheapest levels relative to other commodities since 2009. The other 2 times this ratio reached such depressed levels also marked incredible buying opportunities.

We Are Set Up For One Hell Of A Gold Rally!
Look At Massive Surge In Price Of Gold
After YELLOW CIRCLES!
How High Will Gold Price Soar This Time? 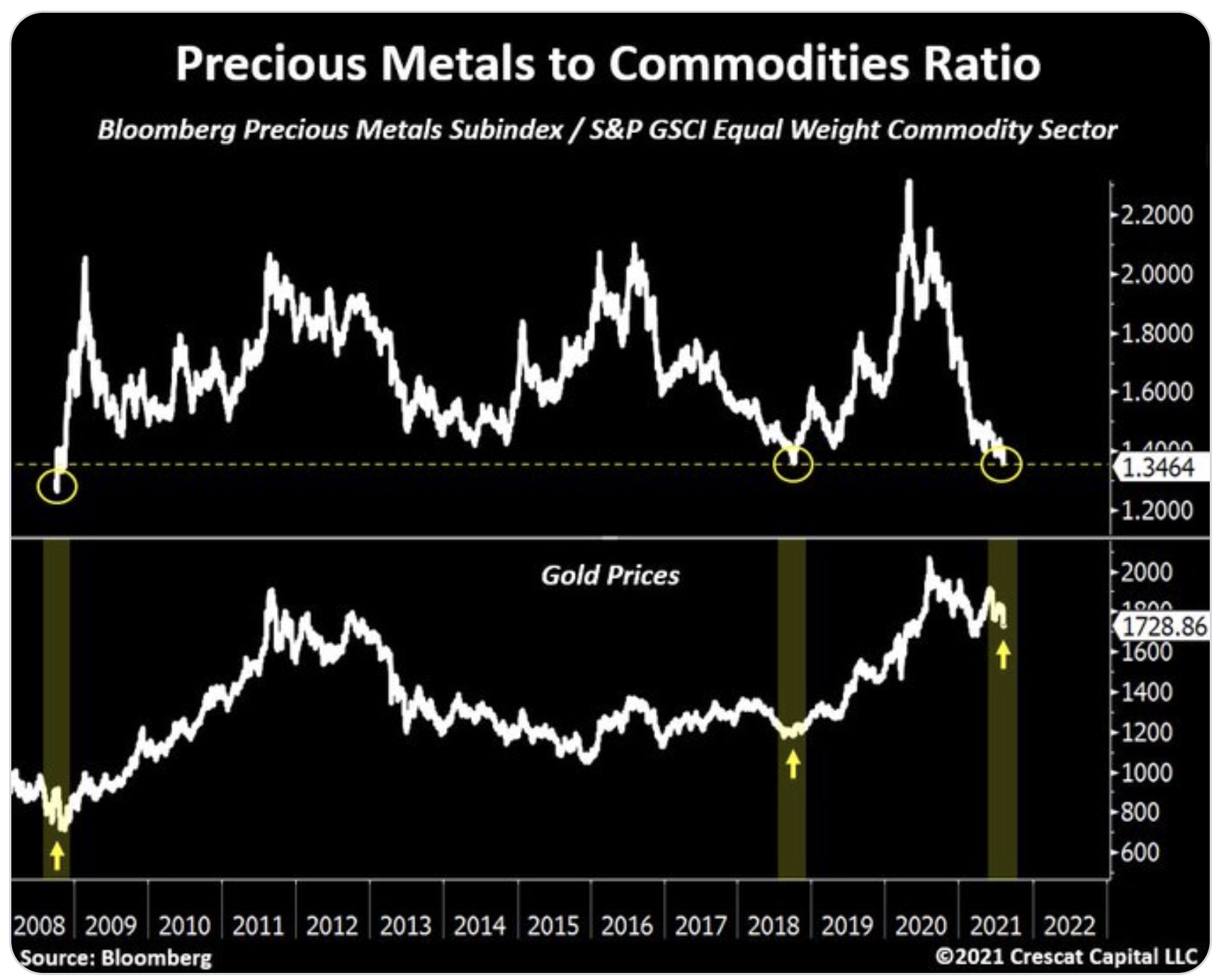 This Is Why A Massive Gold Revaluation Is Coming
Willem Middelkoop:  We all know we need a big/Great Reset. A gold Revaluation should be part of it. This will end decades of manipulation (paper selling). Just like the end of the London Gold Pool (physical selling) in the 1960’s.

The US had promised (BW 1944) the ‘gold window’ would always stay open. After the US lost half of its gold President Nixon decided to close this ‘gold window. So the (London Gold Pool) manipulation had failed and gold jumped from $35 to $880 (1980). (Yep bitcoiners, that’s over 25X). Now, the IMF had said we need a ‘New Bretton Woods moment.’ The current manipulation is ‘organized’ by (paper) selling (shorting) gold and silver.

Criminal Syndicate Of Bullion Banks Doing “God’s Work”
Bullion Banks (Wall Street) are responsible for the paper selling. They sell futures (paper gold/silver) on every rally, but need to cover once in a while. That’s why raids/attacks on the price of gold and silver are executed once in a while. So Bullion Banks can cover their shorts during the panic selling they created themselves. China and Russia understood and have accumulated incredible amounts of physical. Over 20.000 tons of Gold was send from West to East in the last decade.

They haven’t bought Bitcoin since both understand gold might be part of a Monetary Reset. Insiders understand this as well and that’s why Bullion banks want to close their ‘short’ positions. Best way to do that is in a wave of (current) panic selling at lower levels.

When this manipulation ends, as all manipulations do, expect a revaluation of gold (5-10x), just like during the inflation of the 1970’s. Technical Analysis shows gold bottomed early 2016. We are know near the end of the correction which started one year ago. [For what it’s worth, this week] August 15th will be the 50th ‘birthday’ of the Nixon Shock in 1971.