After a brutal day in the metals and mining shares, this is a huge revelation for the gold market.

A Huge Revelation For The Gold Market
February 26 (King World News) – Alasdair Macleod out of London:  Tonight’s Commitment of Traders report is a revelation. While it is no surprise that the Swaps (bullion bank trading desks) have clawed back 16,586 of their net short position, it was at the unexpected expense of Other Reported and Non-Reported categories.

The Managed Money category (hedge funds) increased their net longs marginally. But given the sell-off since the report which coincided with a jump in medium-dated bond yields, the hedge funds have almost certainly cut their net longs since, perhaps by as much as 30,000 contracts.

Let’s look at the Other Reported category. The chart below shows their position. 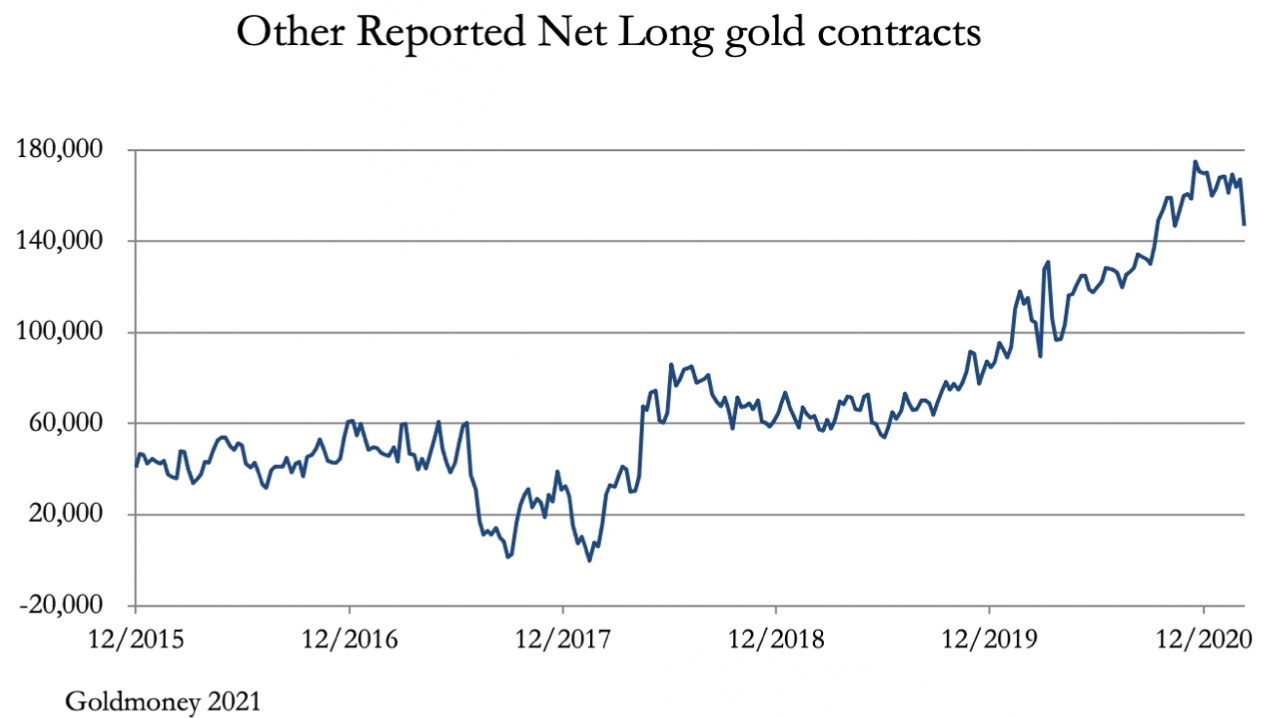 What’s noticeable is the fall in net longs mirrors the fall between 18 February—10 March 2020, before being suddenly reversed on 17 and 24 March. Remember that it was on 20th that the Fed cut its funds rate to zero and 23 March when monthly QE of $120bn was announced. My conclusion is that it is this category that shows sensitivity to relative inflation prospects, and this time it has been spooked by rising bond yields. But we can expect the Fed to impose a temporary ceiling on bond yields, because of their destabilising effects on financial asset values.

With the gold price hitting a low of $1718 today, most of the downside is taken out and I would expect Other Reporteds and Non Reporteds to do what they did in late March — buy futures as the inflationary outlook is reaffirmed. If as I expect, the hedge funds in the Managed Money category have cut some of their longs, it is likely the Other Reported category has increased its net longs from the level in this COT report.

Pierre Lassonde shares with KWN listeners around the world his top mining stock pick for 2021 that he has been aggressively buying as well as discussing where the price of gold is headed and why he is so bullish and you can listen to the interview now by CLICKING HERE OR ON THE IMAGE BELOW.

Also released! This Will Send The Price Of Gold Substantially Higher CLICK HERE TO READ.

Also released! “Game Over” And We Are Seeing Shocking Levels Of Inflation CLICK HERE TO READ.