As we get ready to kickoff trading in the month of December, look at these stunning charts, plus gold and mining stocks.

November 30 (King World News) – Many investors have been frustrated by the trading action in the precious metals and particularly the mining stocks, but there is a distortion that cannot persist when it comes to the miners (see chart below from Crescat Capital).

Even Though The Price Of Gold Has Pulled Back To
$1,772, The Chasm Between The Performance
Of Gold vs Miners Simply Cannot Persist.
Meaning Mining Stocks Have A Lot Of
Catching Up To Do On The Upside 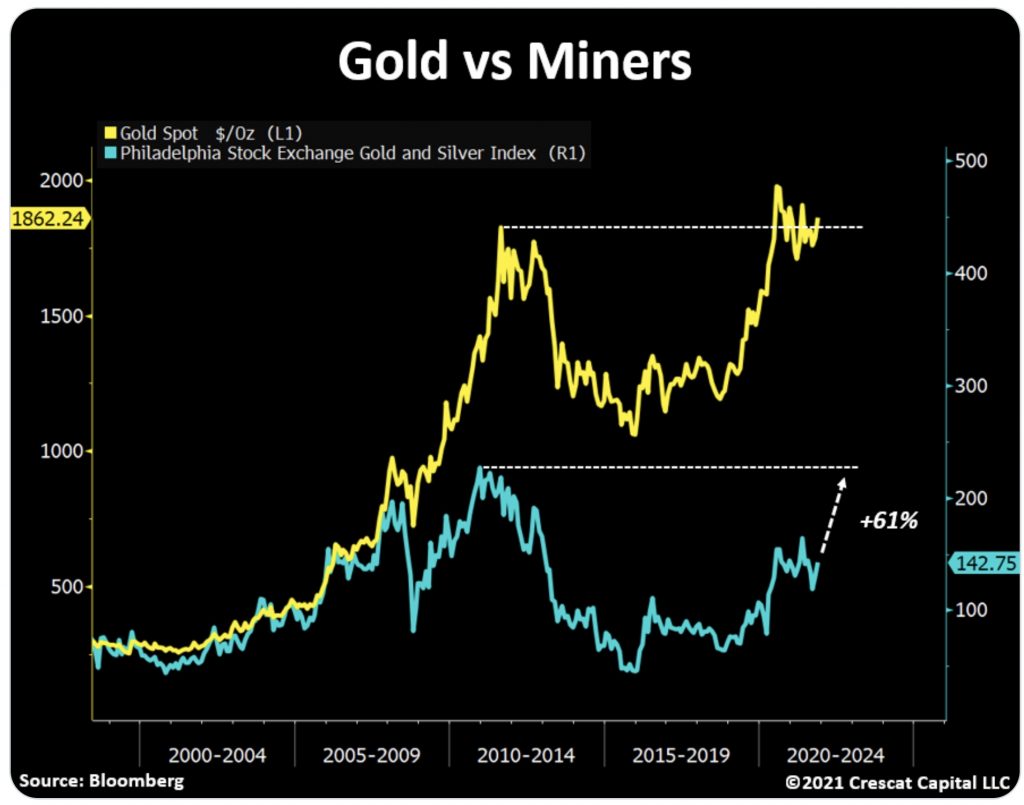 More Transitory Inflation
Peter Boockvar:  The September S&P CoreLogic home price index rose 19.5% y/o/y after a 19.8% increase in August. Plug that into CPI and you have a 10% y/o/y rate but instead we have imputed rents in CPI which is way understating the current pace of rent increases. Also, the Fed is still buying MBS and will continue to do so into 2022. HOPEFULLY though the mind boggling price increases have seen their best days and price gains will slow from here.

Leading the gains was the 33% price increase in Phoenix, followed by 28% in Tampa and 25% in both Miami and Dallas. At the bottom was the 12% price gain in Chicago, almost 13% in Minneapolis and around 14% for both DC and Cleveland. 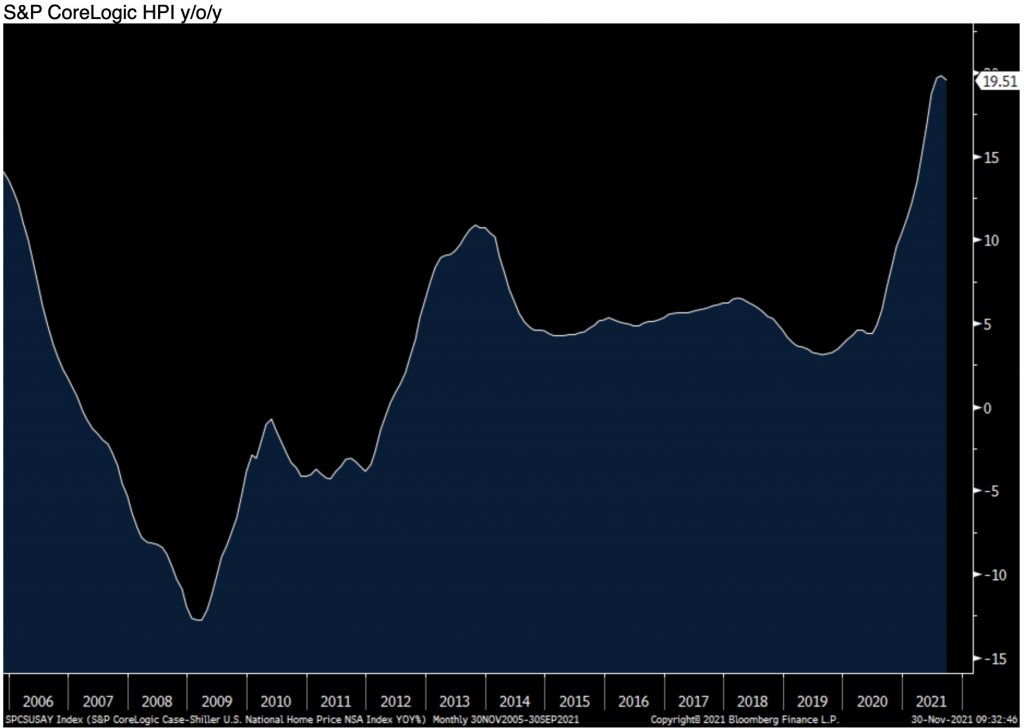 While I don’t want to downplay Omicron and Covid and its real life impact to both health and business activity, I remain of the belief that the biggest risk to markets and the economy is inflation and the central bank response to it and how they can pull off monetary tightening without tightening financial conditions. 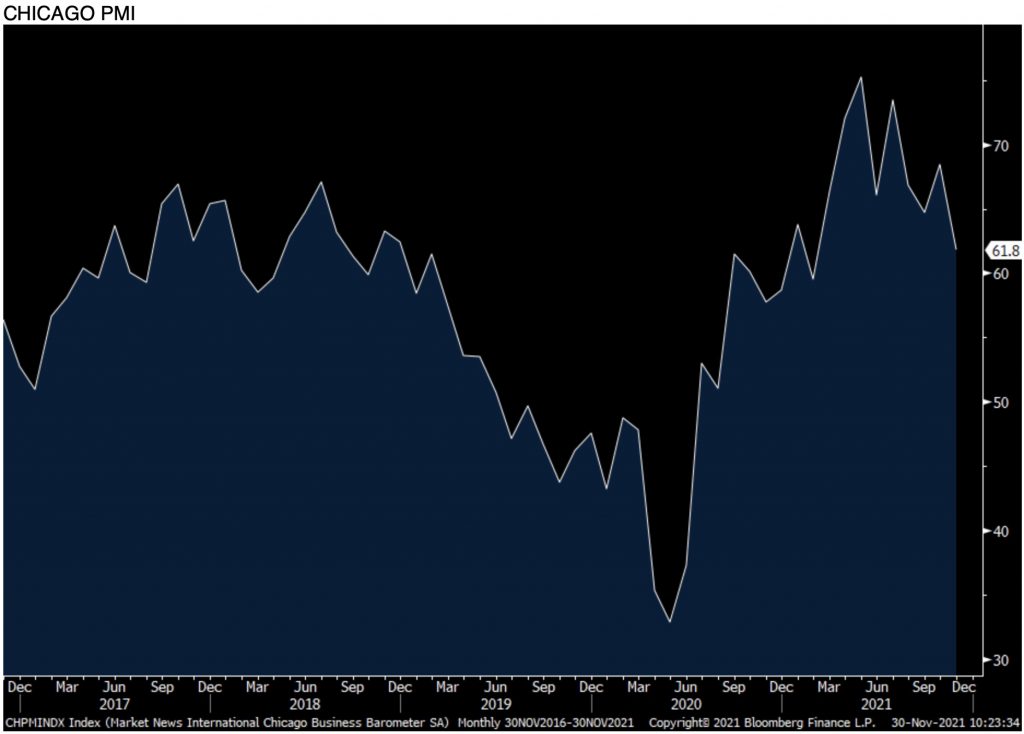 Problems With Inventories Persist
What was noteworthy was the rise to 59.6 in inventories, the highest since the fall of 2018 as “some firms reported stockpiling to get ahead of further supply chain disruptions and counteract logistical issues.” New orders and backlogs fell. Supplier deliveries fell a touch, “however multiple survey respondents reported November deliveries to be the slowest ever.” With respect to inflation, prices paid fell to a still very high 93.8, just below the record high “with ongoing higher costs for production materials reported.” Employment at 51.6 is around its one year average “as firms struggled to find qualified workers to meet vacancies.”

Here were the 2 special questions:

Central Bank Global Emergency Funding Continues
Bottom line, there is nothing in this that we don’t already know. I do believe that the intense supply pressures will ease after the holidays but that doesn’t mean everything quickly goes back to where we were in 2019. Companies have absorbed sharp increases in their cost structure and if the upward trend in wages continues, those higher cost pressures will only persist and thus price increases will sustain itself into 2022 and 2023 I believe. Either way, as stated many times, monetary policy is still positioned as if there was a global emergency and now face the most extreme price pressures since the 1970’s.

The November Conference Board’s consumer confidence index fell to 109.5 from 111.6 in October. 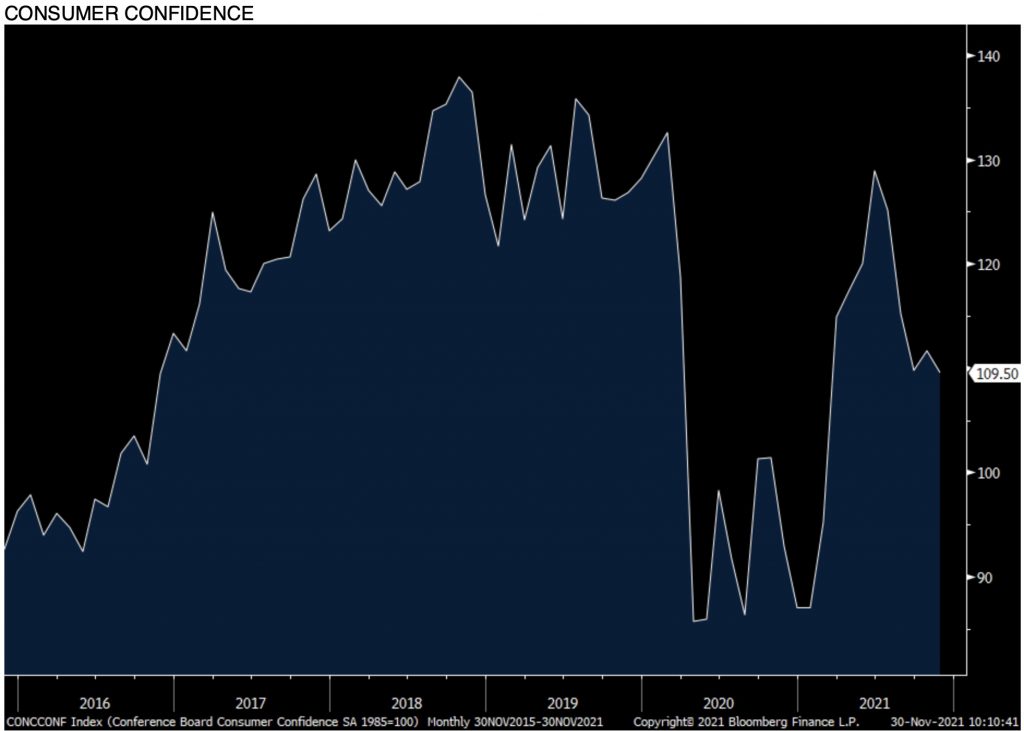 Inflation!
Both the Present Situation and Expectation components were lower m/o/m. One year inflation expectations jumped by 5 tenths to 7.6%, the highest since June 2008 and is the 2nd highest print since this question was first asked in 1987. 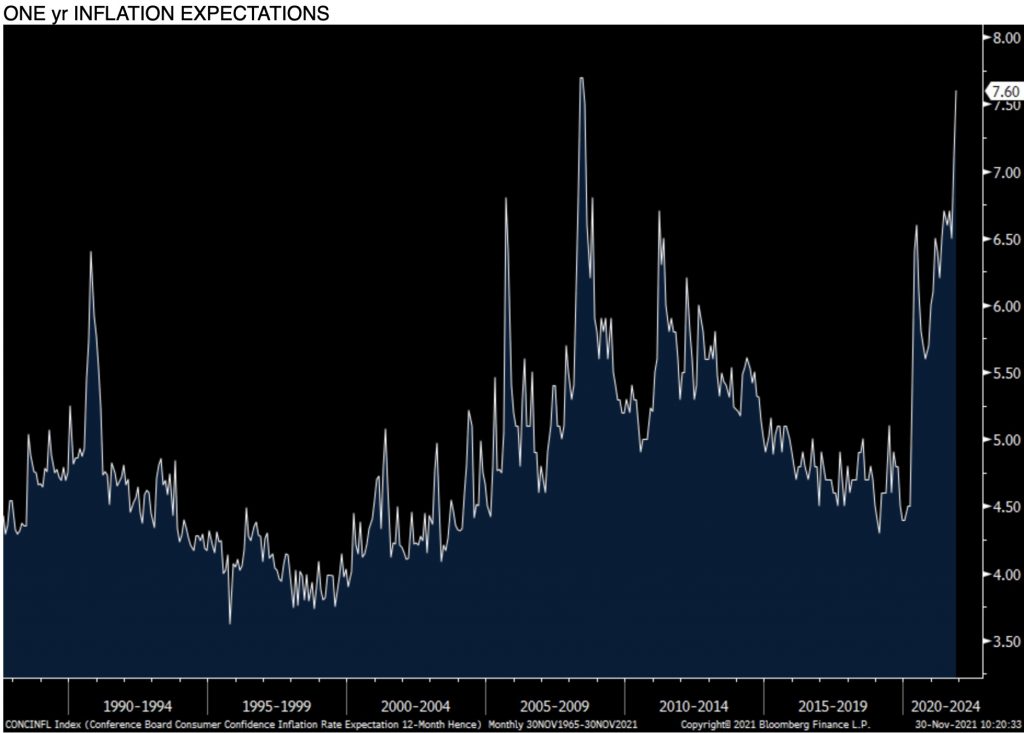 Jobs!
The labor market answers is why this index is outperforming the UoM index. Those that said jobs were Plentiful rose 3.2 pts m/o/m to the highest level since this survey began in 1967. 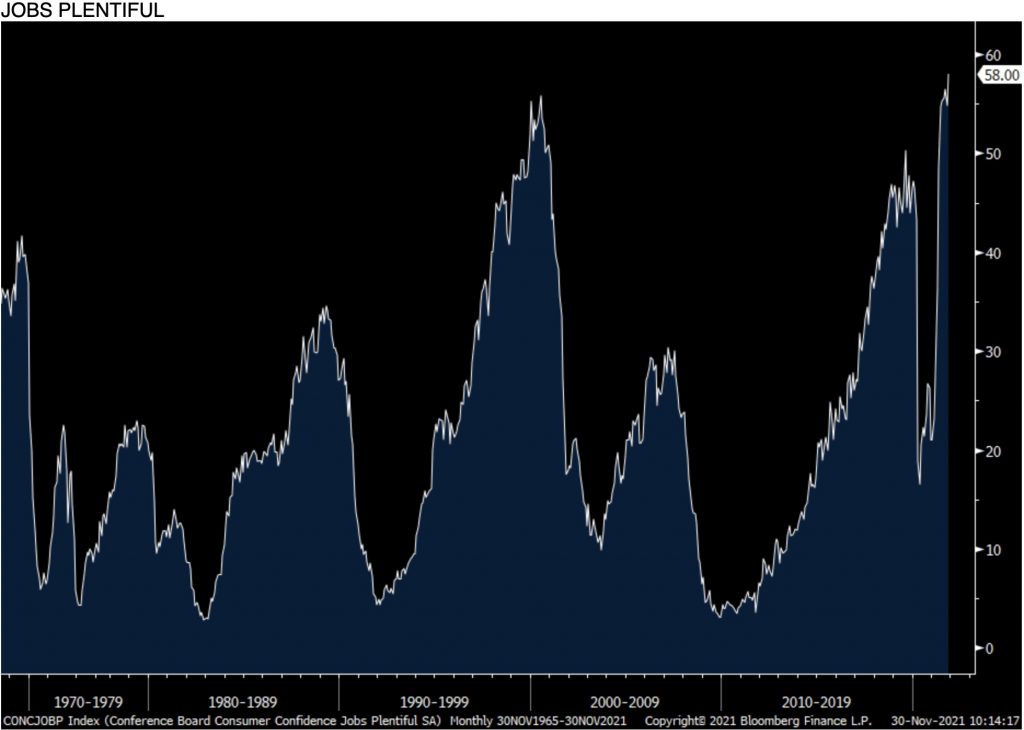 Those that said jobs were Hard to Get was little changed at 11.1, just off a multi year low. Employment expectations for more jobs gave back 2.3 pts of last month’s 3.1 gain. Those expecting an increase in Income fell .5 pt after rising by 1.5 pts last month.

The bottom line from the Conference Board was this: “Concerns about rising prices – and, to a lesser degree, the Delta variant – were the primary drivers of the slight decline in confidence.”

My bottom line, to repeat, while this measure of consumer confidence has held in much better than the UoM survey because of its higher labor market component, it still remains well below the February 2020 print of 132.6. A higher cost of living relative to wage growth is the main reason.