It appears that gold is Russia’s strength, plus this has presaged the last 6 economic and financial crises!

Massive Volume In Gold…Again
March 3 (King World News) – Graddhy out of Sweden:  The up volume for spot Gold is absolutely massive also today already. Yesterday we had huge down volume but price did not move much and also bounced from 1919, meaning the huge selling could not press the price down very much, which is bullish…

WARNING!
Steph Pomboy:  2-10yr curve 31bp…and flattening. Why isn’t every economist on Wall St forecasting a recession?The last 6 times we were at current levels presaged major economic and/or financial crises. During that time we have NEVER seen a simultaneous increase in oil this fast without recession. I rest my case.

This Has Presaged Last 6 Economic
And Financial Crises! 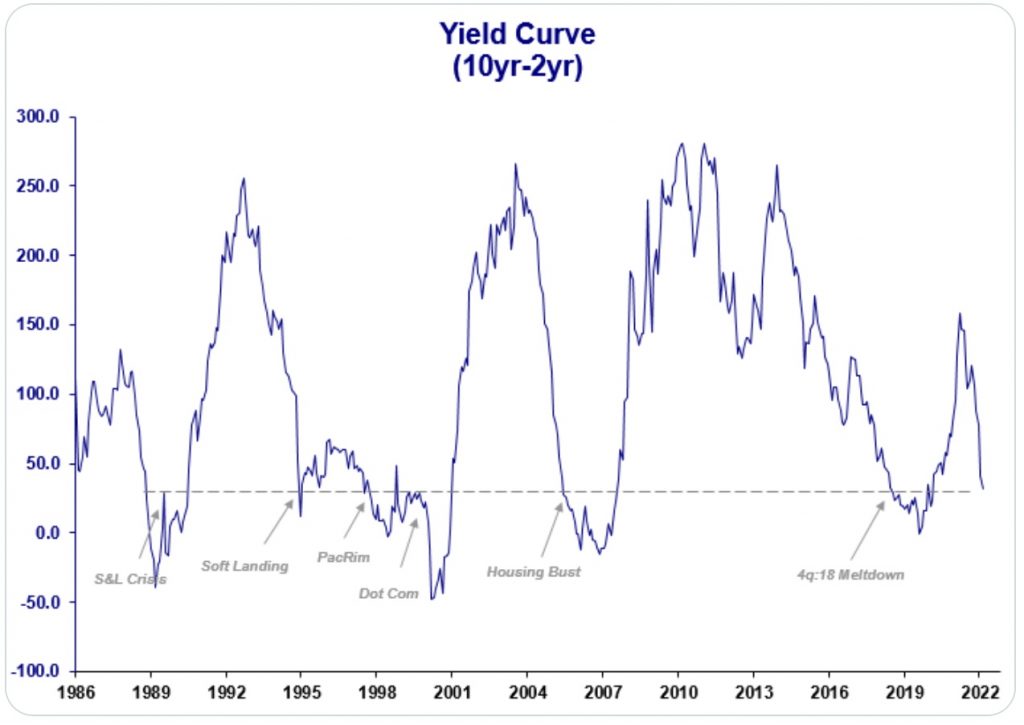 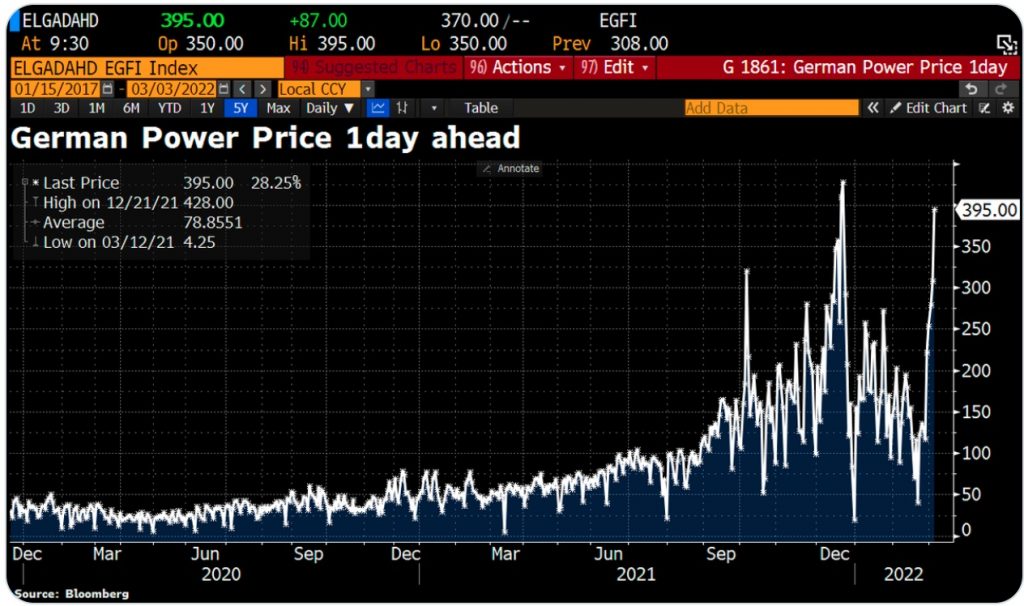 A Bit More Transitory Inflation
Holger Zschaepitz:  Europe Natural Gas Futures rise to a record €198/MWh as the market continues to focus on sanctions on Russia in response to its invasion of Ukraine. 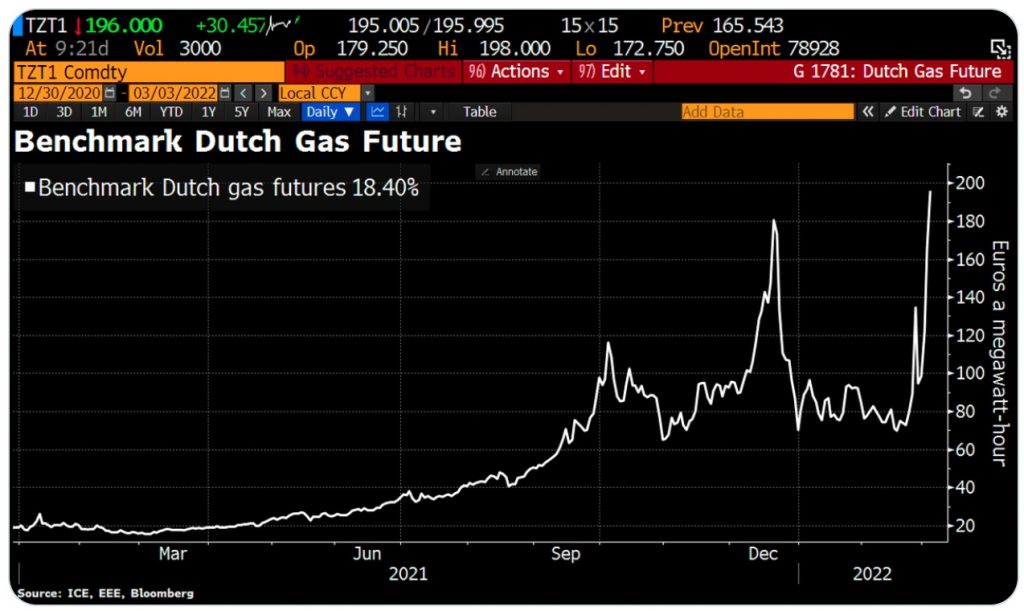 Gold Could Be Russia’s Strength
Alasdair Macleod:  Since the West’s attempt to destabilise the rouble in 2014, Russia has diversified its foreign reserves, reducing its dollar exposure, increased its euro and renminbi exposure, and accumulating gold which now represents 23% of its foreign reserves, slightly more than its dollar holdings. At the Finance Ministry, the National Wealth Fund similarly has about 20% of its assets in gold (estimated to be a further 670 tonnes). 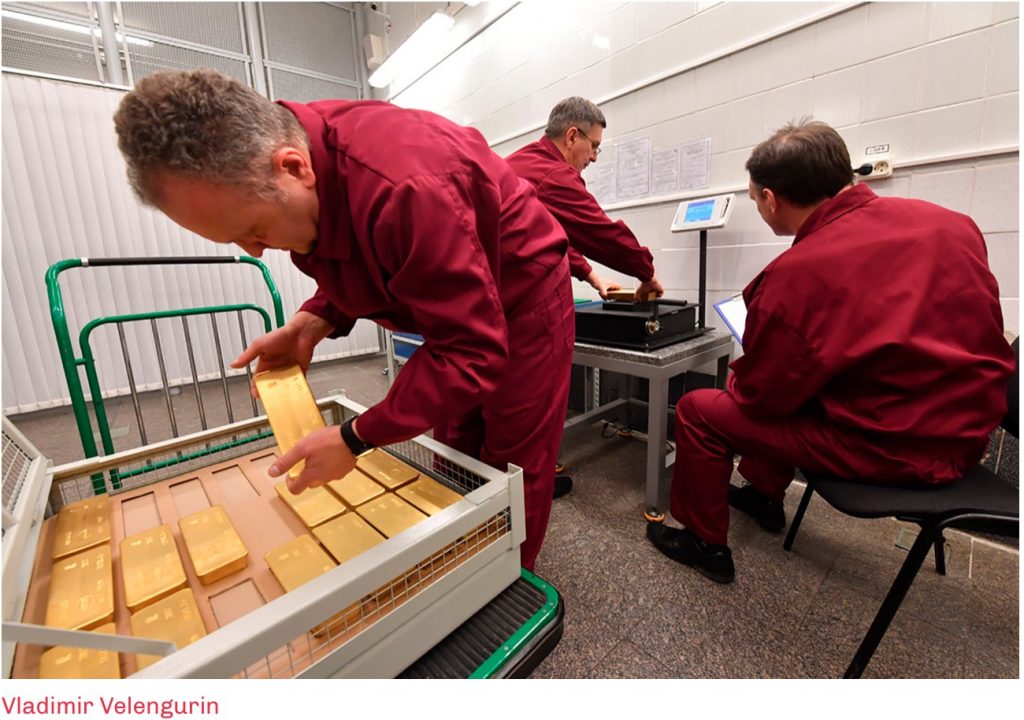 Since 2014, the gold price in dollars has risen over 60%, proving the central bank’s gold accumulation policy to have been more sensible that just switching dollars for other foreign currencies. In euros gold has risen 73% on the same timescale, because of the euro’s relative weakness to the dollar. Not only has diversification out of foreign fiat currencies been the most sensible policy, but now that access to fiat currency reserves has been compromised by foreign governments, the argument for further accumulation of Russia’s gold reserves becomes even more compelling. 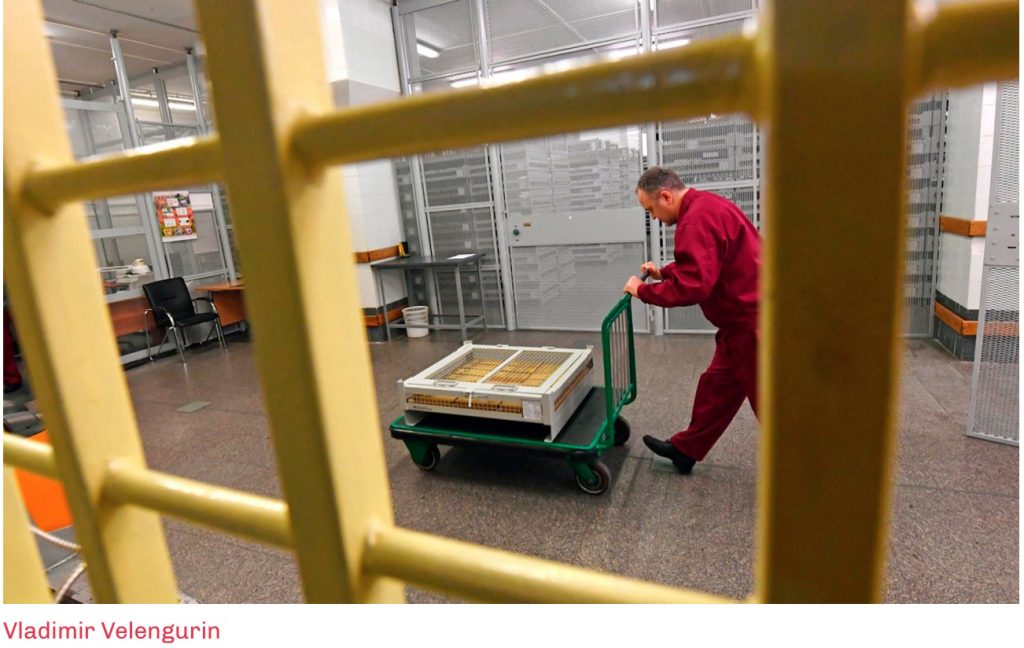 Furthermore, Russia’s energy and commodity exports continue to accumulate foreign currencies, which are not really needed in the domestic economy. As pointed out above, it is essentially libertarian, with a 13% flat income tax, light regulation, and government debt at less than 20% of GDP. The only destabilising factor is bank credit, which thanks to Elvira Nabiullina’s firm stewardship at the RCB is a manageable risk. Foreign currency reserves are needed for interventionist policies, which is not Nabiullina’s style. Beyond minor amounts of foreign currency for day-to-day liquidity purposes, there is no need for them in Russia’s fundamentally free market economy. 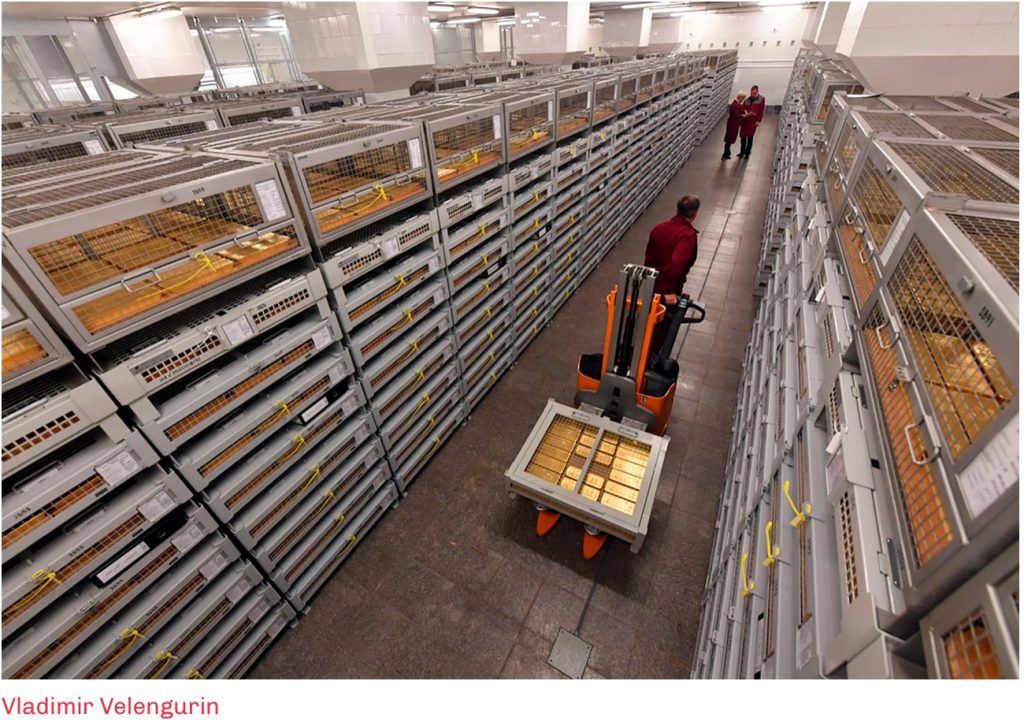 By cutting off the RCB from its reserves, the West has made the case in Russia for gold reserves in their entirety, with only trivial amounts of foreign fiat for liquidity purposes. And the conditions necessary for tying the rouble’s liquidity to gold is partly there already. Last December, rouble currency M0 stood at $115bn equivalent while its gold reserves are valued at $141bn. Even allowing for a subsequent expansion of liquidity to support commercial banks, we can assume that official gold reserves still cover narrow measures of currency. The message sent by foreign governments and their central banks to the RCB is that to stabilise both the domestic currency and its valuation in foreign exchanges it is better to back the rouble with more gold than with increasing amounts of foreign currencies, which can always be deployed by Russia’s enemies in their attempts to undermine the rouble. 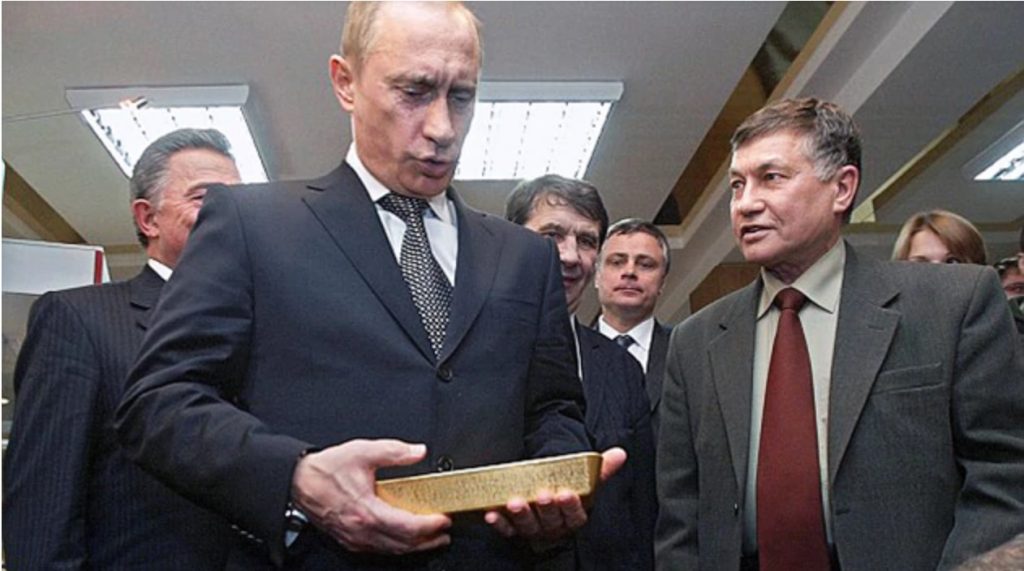 How long it will take for this penny to drop in Moscow is an intriguing question. Given the evidence of recent accumulations of gold reserves and an economy based on libertarian lines, it probably has already. The confirmation will be from all gold exports ceasing, and through friendly agents, such as the Chinese, Russia entering the bullion market to buy what it can. And as Pepe Escobar’s tweet suggests, there is always the option of only supplying energy in return for physical gold, an increasingly compelling argument. And if the Russian state has hidden bullion reserves, we can expect to have them partially or wholly revealed as well.

We can now see how the West’s financial sanctions are likely to backfire, initially destroying the euro system and its currency. The euro’s failure will undoubtedly be blamed on Putin and factors not shared by other central banks. But there is a significant risk that the euro failure will not only destabilise the global economy, but its major currencies as well. Ordinary people will then want to distance themselves from bank deposits and financial assets dependent on the continuation of the fiat Ponzi.

These messages will not be lost on other central banks, which will be re-examining their currency reserves policies. Central bank purchases of gold could increase materially, and leases and swaps where central banks are counterparties come to an end.

That being the case, are we now beginning to see a pathway through to the final destruction of unbacked fiat currencies, the ending of the fiat Ponzi, and a widespread realisation that true money, after all, is only physical gold?