Look At How Much Personal Incomes Have Plunged! Cheap Money, “Hopes & Dreams,” Plus Commodities Are Booming!

Look at how much personal incomes have plunged! Cheap money, “hopes and dreams,” plus commodities are booming. 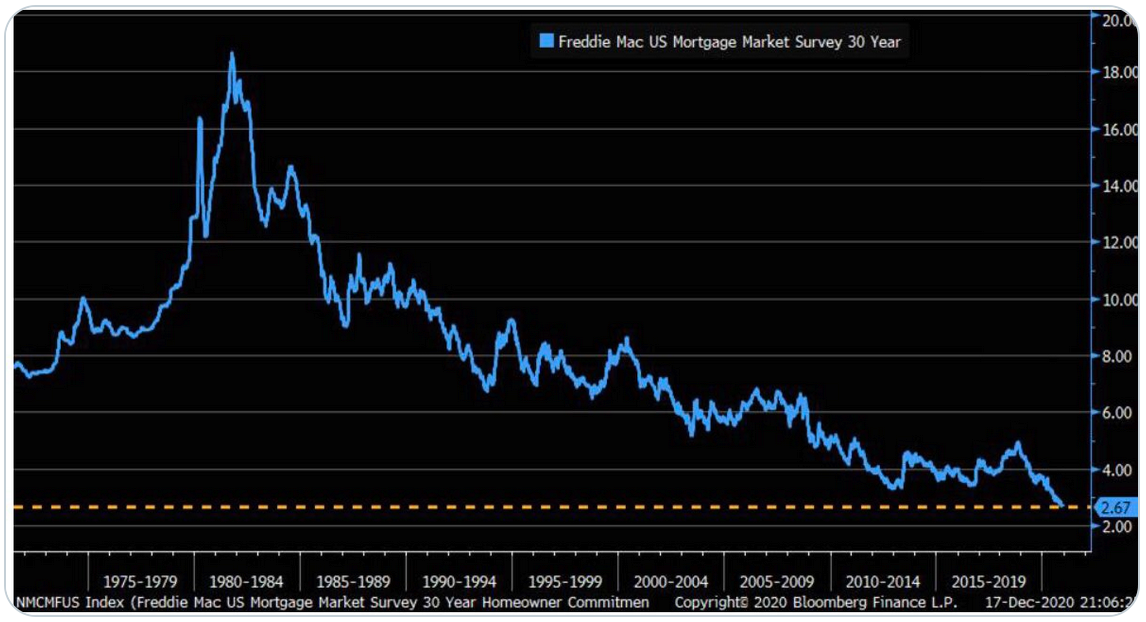 “Hopes & Dreams”
Liz Ann Sonders, Chief Investment Strategist at Charles Schwab:  Looking at valuation from perspective of % of S&P 500 valuation that can’t be explained by book value or earnings expectations over next 3 years—shows “hopes & dreams” of market … now highest since dot-com era (see chart below). 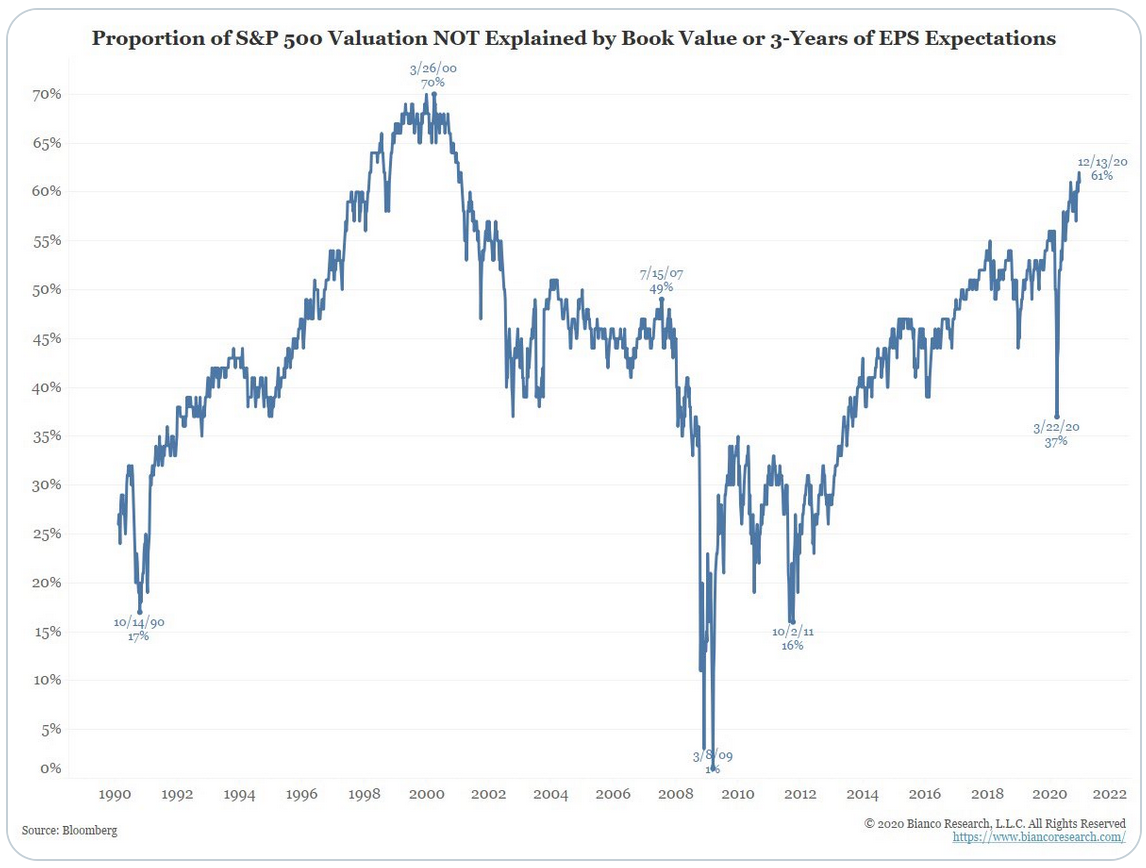 Personal Incomes Have Plunged In
Various States As Much As 30%! 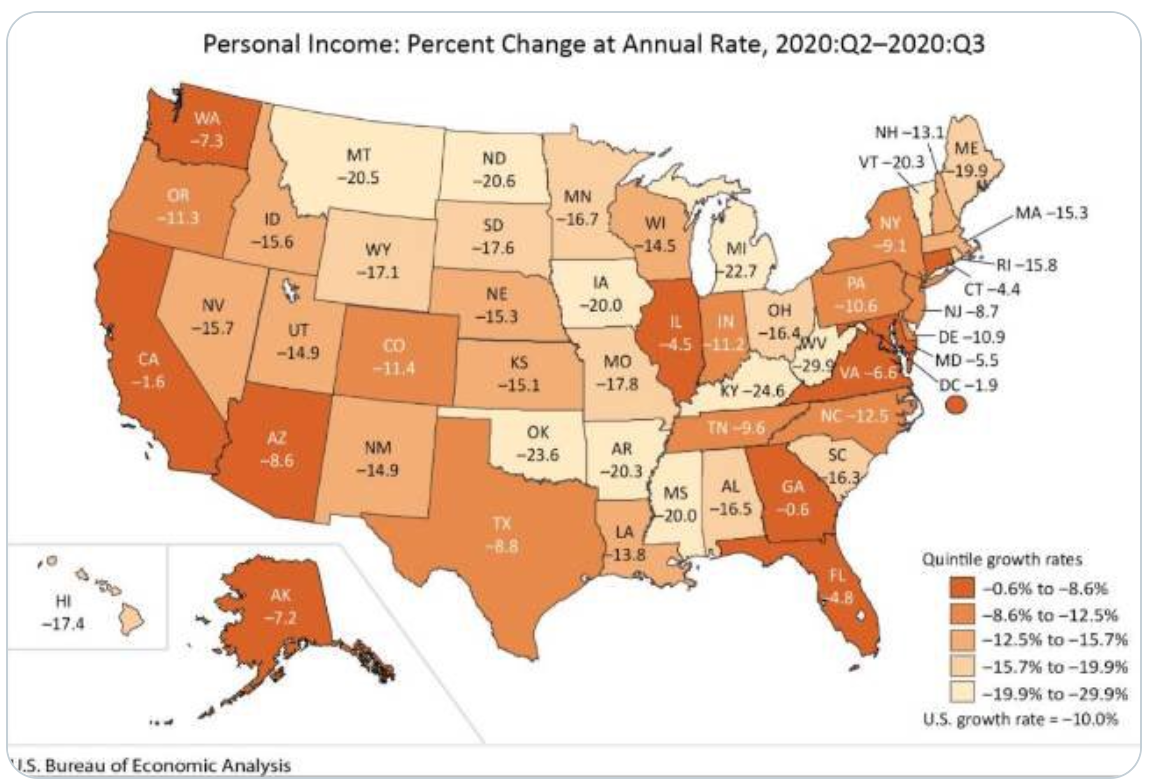 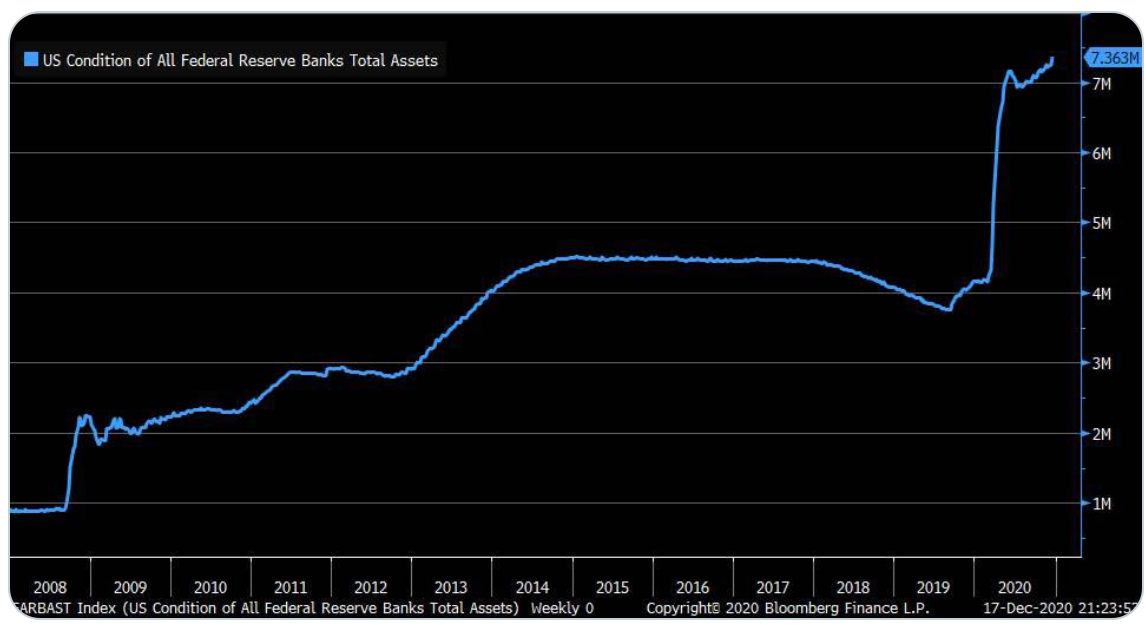 Commodities Are Booming
Peter Boockvar:  The US dollar weakness after 4 straight days of declines to the lowest level in more than 2 1/2 yrs is taking a break today with a modest bounce. But, most commodity prices continue higher with copper, aluminum, iron ore, soybeans, corn, wheat, and lumber to name a few continue their rise. The final arbiter in 2021 of Fed policy on whether it’s too much, not enough or just right will be the long end of the US yield curve. The implied inflation rate in the 30 yr TIP closed yesterday exactly at 2.0%, 1 bp from a 2 yr high.

Japan said its November CPI fell .3% y/o/y ex food and energy as expected. This is due in part to the government’s discount program meant to incentivize travel. Hotel prices in response fell by 34%. Lower energy prices also weighed on the headline figure which fell by .9%. With energy prices now rising, expect that to reverse. This is the idiocy of targeting higher inflation and the fallacy that all deflation is bad. The government is purposely discounting a major sector in order to encourage demand and economic growth at the same time the BoJ is trying to raise the cost of everything.

What we’ve also seen over the past 10+ years is that NIRP, ZIRP and QE DOES NOT drive faster economic growth and inflation. Especially for the latter, it will happen in spite of this policy, not because of it. Of course, the lack of success doesn’t discourage central bankers from what they are doing, it only encourages them to do even more and expecting a different result. And of the biggest consequence, central banks that have chosen this path, including our own, have found it impossible to get out of.

There Is Something Else Happening That
Is Very Important Here….

Ivan Bebek:  “I am not old enough to remember the 1970s gold and silver mania, but my father told me:

“It was the craziest thing I have ever seen. That is what is coming once again. It won’t even matter what you own in the space, it will all be going higher, just like the Dot-Com mania.”

For what it’s worth, my father now owns well over a million shares of my company. These are all shares that he purchased in the open market. He told me the reason he bought so much of my company’s stock is:

“I believe this company can be one of the top performers in the coming mania, and I want to be well-positioned to take advantage of what I witnessed in the late 1970s mania.”

Apart from my father, I have never been part of a better positioned gold company in my 22 years of being in this business as a shareholder or an executive. Discovery is the most rewarding investment return that a gold company can offer its shareholders, and we see major discovery opportunities across all 4 or our assets which, will be drilled continuously through 2021.

We have just started our first 50,000 meters of a 100,000 meter drill program in attempt to make our high-grade deposits much bigger and find some of the largest gold mines globally in Canada.  We are currently drilling in the one of the best regions in the world to find gold — the James Bay Region of Quebec. The results from this program will provide us with the most important catalysts relative to our share price performance, which we anticipate will be very exciting drill results for the next 24 months.

The Coming Mania
Like my father said, Fury shareholders will be well-positioned to benefit from the upcoming mania. We will see 24 months of steady gold growth opportunities across our 4 assets as well as major discovery swings that we will be taking monthly as we enter the mania stage of the gold bull market. Fury Gold, symbol FURY in Canada and the US.

Also Just Released: We Are Now At The Beginning Of A Great Hyperinflation, Plus Gold Chart Projects Surge To $2,600-$3,000 CLICK HERE. 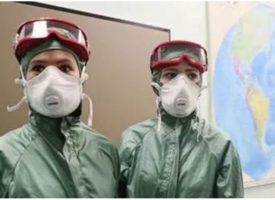 ALERT: This Terrifying Banking Crisis Threatens To Be The End Of Fiat Money