Today a legendary short seller said former Chairman of the Federal Reserve, Alan Greenspan, is “a financial war criminal.” He also discussed the major markets and why the Fed is going to restart QE.

By Bill Fleckenstein President Of Fleckenstein Capital
September 27 (King World News) – The stock market bolted higher out of the starting gate over hype about the proposed tax reform plan. There obviously hasn’t been much time to analyze this proposal and, at this stage, it doesn’t mean that much because Congress is so dysfunctional, who knows what (if anything) might actually get passed. Thus, it is rather difficult to handicap what the final result will be…

Let’s Just Rate and See
On its face, it would appear the proposed plan makes computing taxes somewhat easier (although I will believe that when I see it). However, it may also amount to a tax hike on individuals in order to pay for corporate tax reform. Again, I don’t want to make too much out of a trial balloon, but it is pretty hard for me to believe that the stock market is where it is simply because of this plan, even as so many have used tax reform as the battle cry to justify buying stocks. At the end of the day, the market is where it is because of QE, aided and abetted by ETFs and algos, all of which has brought us to an environment where nothing really matters.

There is no better example of this than Apple, whose latest phone is off to a worse start than even us skeptics would have expected. Of course, that is now deemed to be bullish because wild-eyed Apple bulls are saying that the iPhone 8 is a flop because everyone is waiting for the X, which Apple is having trouble producing.

“Jeopardy,” Wall Street Style
The situation is reminiscent of a joke I used to make in the late 1990s during that mania (which is kid stuff relative to this one) that there ought to be a be gameshow called, “This Is Bullish Because…” where a random news event would be tossed out and contestants would compete to explain why it was bullish. For example, “A nuclear event would be bullish because…” Of course, in today’s environment the reply would be, “Well, we’d just have to rebuild everything.” Just look at the logic for why all the hurricanes this year are deemed to be bullish when in fact they are not. In any case, this is the environment we live in.

After the initial surge higher, the Dow and S&P were back to unchanged through midday while the Nasdaq kept a 0.5% gain. In the afternoon, the Nasdaq climbed again closing over 1% higher with the other indices stronger too, but continuing to lag. Beneath the surface FAANG and other momentum favorites were really on fire.

Away from stocks, the concept of tax reform was bullish for green paper (at least today), oil was flat, fixed income was quite heavy, and the metals were initially smacked for 1% in a kneejerk reaction to the dollar strength. However, they then bounced, led by silver, which made it back to almost unchanged, even as gold remained in the red to the tune of 0.8%. 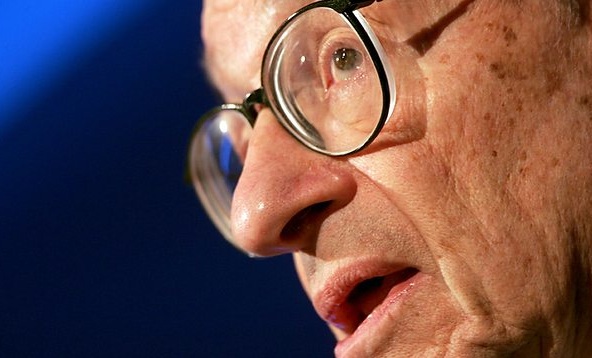 “He Is A Financial War Criminal”
Question: Fleck, hey, while you’re at the conference with Alan Greenspan, could you punch him in the nose for me three times? Once for me, twice for my daughter’s college funds? 😉

Answer from Fleck:  “He is a financial war criminal as far as I am concerned. However, I’m curious to see if he has learned from his mistakes, finally, or is still in denial. If he is, I’d be happy to punch him for both of us, but I don’t want to embarrass Jim.”

Question: I don’t know whether Greenspan has learned anything, but I am much comforted by what Janet Yellen said a few minutes ago in an NABE interview, to wit, that we need to consider the potential negatives of an inflation rate over 2% along with the positives.

Answer from Fleck:  “They don’t even slightly understand that the CPI and the PCE are constructed NOT to show inflation It’s s-o-o-o-o stupid.”

“I Don’t Plan To Sell Miners”
Question: Bill, I have a some questions that have been giving me heartburn for some time. In my opinion gold will appreciate a decent amount over say a 3 year period from today. I also think that the stock market will decline appreciably sometime in the next year or so give or take. Gold and miners are not a put on the stock market, I get that. When the stock market ultimately decides to decline do you think it will drag gold miners (at least initially) down with it? And a follow up to that, do you plan on having your finger over the sell button (in regard to miners) if they start to follow the broader markets down? In the event of a sharp broad market selloff will you look to sell all of your miners and then reenter at a lower price? Sorry for the possibly redundant questions but this market has made me decidedly paranoid. It does not feel “safe” to buy and hold stock in any company. Thanks as always.

Answer from Fleck: “Do you think it will drag gold miners (at least initially) down with it?” Sorry, but I have answered this a zillion times, please try the search. When stocks tank, the Fed will restart QE and gold will respond to that. No, I don’t plan to sell miners due to stock market weakness.