Today one of the greats in the business warned investors to be cautious.

Adding to the surveys released since stocks shot up after the election, the National Association of Active Investment Managers revealed that the average money manager is nearly 100% exposed to the stock market. Group-think among them is also extremely high, with a low standard deviation in responses to the survey. Even the most bearish manager is net long stocks. That all adds up to one of the most exposed readings in the survey’s decade-long history. Like most trend followers, the managers tend to be right during the bulk of a move, but when group-think takes over, they are a better contrary indicator. Other than 2013 when almost no contrary indicators were effective, such heavy exposure to stocks has been a warning sign for medium-term returns. (KWN added Jason’s chart below).

Money Managers At One of The Most Exposed Readings In History 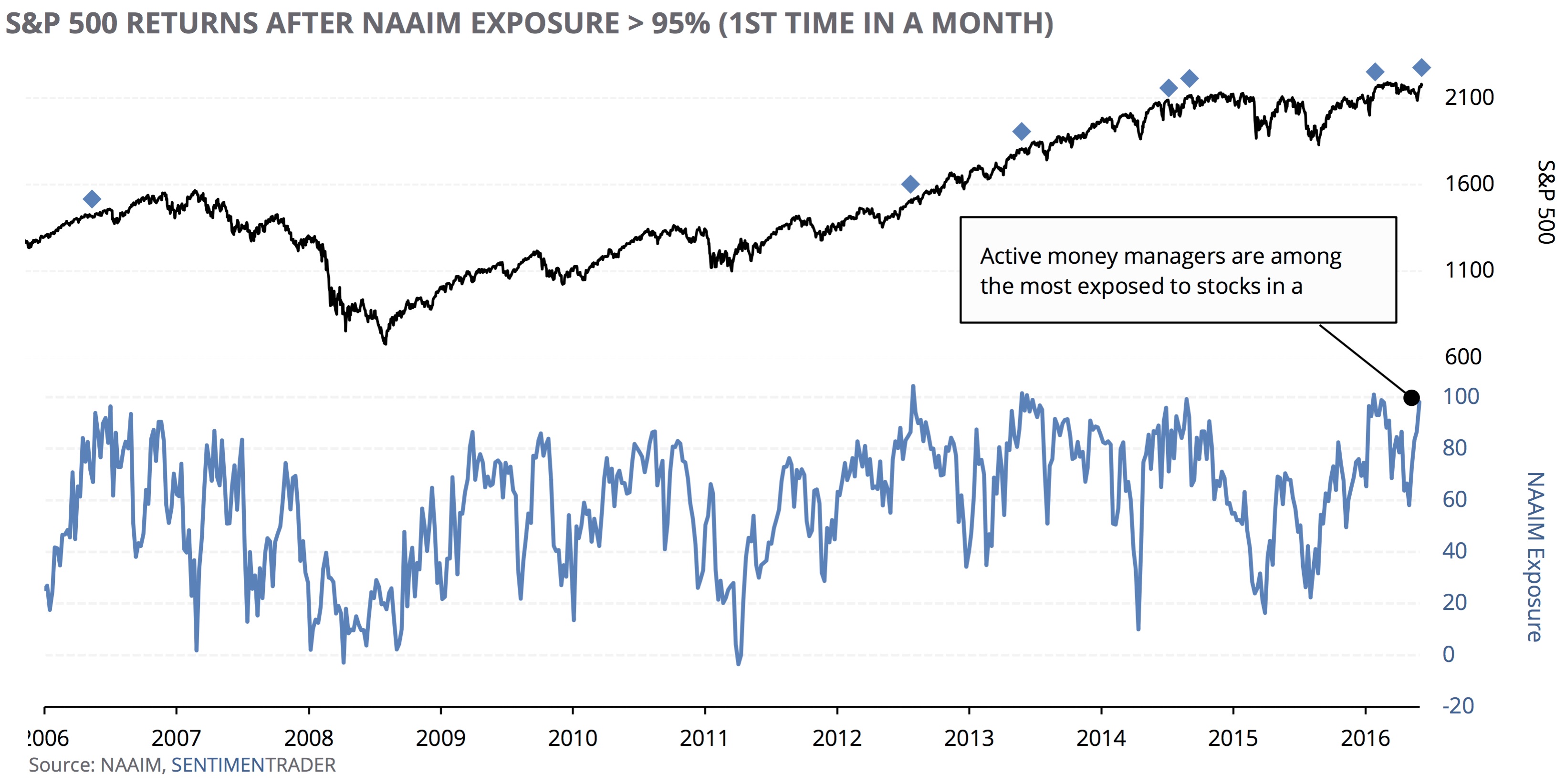 KWN Note:  Jason added:  “Even the most bearish manager is net long stocks.”

Art Cashin continues:  Caution #2 – In a Reuters interview, Jeff Gundlach, the wizard of Doubleline Capital warned of some market reversals before Inauguration Day on January 20th. Here’s a bit from Reuters:

The strong U.S. stock market rally, surge in Treasury yields and strength in the U.S. dollar since Trump’s surprising presidential victory more than three weeks ago look to be “losing steam,” Gundlach, who oversees more than $106 billion at Los Angeles-based DoubleLine, said in a telephone interview.

“The bar was so low on Trump to the point people were expecting markets will go down 80 percent and global depression — and now this guy is the Wizard of Oz and so expectations are high,” Gundlach said. “There’s no magic here.” (Reporting By Jennifer Ablan)

Bill Gross, at Janus, also cautioned that the post-election market celebration might be based on false premises.

The lighting of the tree and the Dow rally yesterday should kick the holiday festivities into high gear. Be bullish on Santa.

In Europe, stocks were also lower with the most damage seen on the continent as concerns about Sunday’s Italian referendum grow more intense.

Crude begins to back off, hinting the short squeeze may have exhausted itself. The dollar firms slightly and yields dip a smidge. Gold is a touch firmer on weekend anxiety.

Consensus – Payroll consensus is around 175,000 but there are lots of whispers above 200,000. Traders will look to the Fed’s Brainard, who speaks shortly after the payroll numbers. As we’ve noted before, the first 15 days of December tend to be choppy. Stick with the drill – stay wary, alert and very, very nimble. Have a wonderful weekend!