With many global stock markets continuing to set new records and the crude oil market struggling, many people are wondering if 2015 is set up for another big year or if there are reasons to worry?

To help answer those questions, here is the latest Investors Intelligence report along with the all-important sentiment chart:  "Averages rallied over the holiday shortened week, including many further records! Prior 2014 tops were just exceeded. Indicator charts showed general advances as well but also divergences. The NYSE and NASDAQ Comp oscillators failed to show confirming highs. Crude fell to a new five-year low Monday. There is a historic upside bias for this week but the outlook for more gains to start 2015 is not yet clear. Advisors also noted the market's latest advance with more optimism. That suggests they hold less cash and our worries are increasing.

The latest market gains saw the bulls up to 56.4%, from 52.5% a week ago. Their number fell below 50% mid-December but bullishness is now back to the November highs. That pre-Thanksgiving reading showed higher risk, and a quick near 6% retreat followed. The bulls exceeded 60% earlier in 2014. Bulls above 50% show increasing risk while +60% levels point to near fully invested outlooks that usually precede a stock market top. Their Oct low at 35.3% said they had raised cash. That has now been put back to work.

There was small contraction for the bears to 14.9%, compared with 15.8% last issue. That returned them to their two-weeks ago level. Bears are ignoring the US economic strength and instead comment on the long period without a serious market pullback. They also expect the building negative overseas factors to contribute to a large US decline.

There was also a decline for those projecting a correction to 28.7% from 31.7 last week and 35.6% before that. They equal their mid November reading when indexes were last at highs. The current market strength could see the count fall further if it extends to the New Year. Advisors now make quick shifts, reacting to market swings and world news.

The spread between the bulls and bears jumped to 41.5%, from 36.7% a week ago. That returns the difference to danger territory above 40% and nears the 42.7% peak from mid-November. The low mid-Oct difference of 17.1% achieved a near positive level. Differences over 30% are a worry and above 40% signal major caution. … Bears haven't outnumbered bulls (a negative spread) since October 2011. 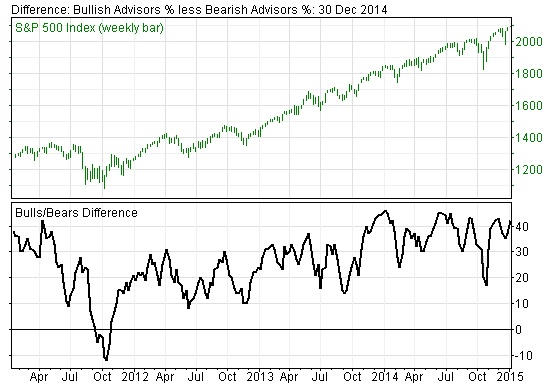 As Global Markets Brace For Another Wild Week, One Of The Greats In The Business Just Flashed This Major Alert On Gold