Last Chance To Buy Cheap Silver, Plus a Look At Real Estate

This is most likely the last chance to buy cheap silver, plus a look at real estate.

The Big Asset Rotation
April 27 (King World News) – Graddhy out of Sweden:  This long standing ratio chart showing Silver vs S&P 500 broke out above blue line with silver’s huge move back in July 2020. We got breakaway from blue line and now another backtest. A historic move has started. 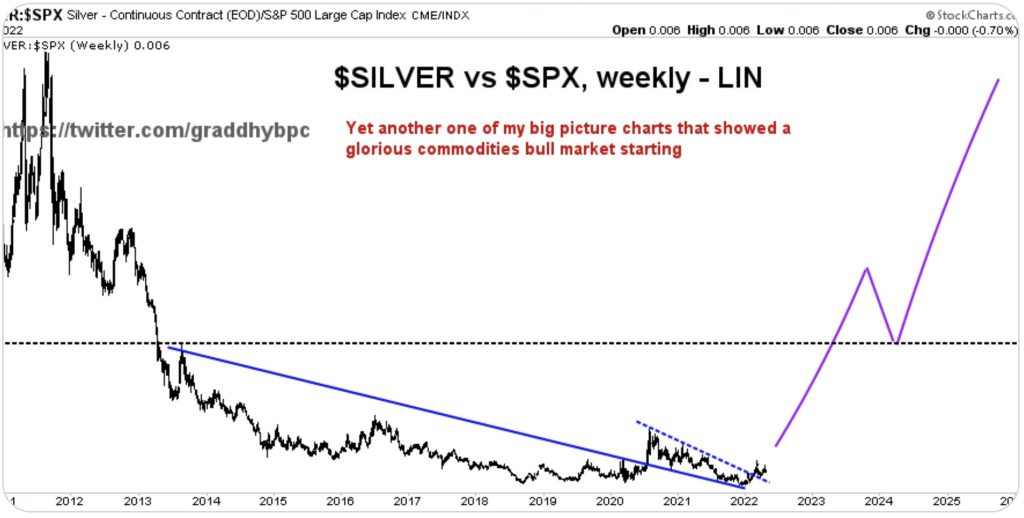 Real Estate
Gerald Celente:  The median selling price of a U.S. home rose 15 percent to $373,300 in March, according to the National Association of Realtors (NAR), a record dating back to at least 1999.

At the same time, sales fell 2.7 percent nationwide from February, and 4.5 percent year on year, as rising mortgage interest rates combined with higher prices to shut more people out of the market.

During the COVID War, remote workers and families in search of cheaper digs and more green space took advantage of record-low interest rates to grab suburban homes in the most popular metro areas.

Homes routinely sold for more than their asking prices, often within days of being listed, a trend we reported in “Median Home Price Sets Another Record” and “Home Sales, Prices Still Rising”.

Now that perfect confluence of conditions has ended and the home-buying fever is cooling, with mortgage rates for 30-year, fixed-rate loans above 5 percent, compared to lows of just under 3 percent last year.

As a result, home sales this year will number 10 percent fewer than last, according to NAR chief economist Lawrence Yun…

Mortgage applications to buy a home slipped 3 percent during the first two weeks of this month and 14 percent from a year previous, the Mortgage Bankers Association reported.

“We see a lot of serious, pre-approved buyers who were ready to go a month ago and now they’re not in the market any more,” San Diego real estate agent Monika Presai told The Wall Street Journal.

Still, analysts expect home prices to continue to rise, the WSJ said: only 950,000 homes were for sale on 1 April, 9.5 percent fewer than a year earlier, barely a seven-week inventory.

As a result, many homes still receive multiple offers, according to the NAR.

Rising prices and interest rates are especially hard on first-time buyers, who comprised 30 percent of home sales in March, compared with 32 percent a year earlier.

Housing starts rose 0.3 percent in March from February, and residential construction permits were up 0.4 percent on the month.

And today, according to the S&P CoreLogic Case-Shiller national home price index, home prices hit their third-highest reading in the index’s 35-year history as prices increased 19.8 percent in February year over year… up from the 19.1 percent annual increase in January.

TREND FORECAST:
Although housing starts are up, there are not enough to ease the shortage of available homes to buy. The market will remain tight for several years, due in large part to a lack of available, affordable land on which to spread new housing tracts.

As a result, for the foreseeable future, home prices will remain high enough to close out large segments of the U.S. population, especially now that mortgage interest rates are on the rise.

We have documented this trend in articles such as “Median U.S. Home Price Sets Another Record” and “Home Prices Up, Incomes Down”.

Also, private equity firms have pervaded the market for private homes, buying them individually or, often, in large batches, to turn into rental properties, as we have reported in “Invitation Homes to Buy $1 Billion Worth of Houses This Year”, “Blackstone Extend Reach Into Housing Market”, and “Private Equity Partners Target $5 Billion in Rental Houses”, among other articles.

The combination of high home prices, rising interest rates, premium rents, and a slowing economy will extend a trend we have been warning about for more than a year: younger buyers will have an increasingly difficult time saving cash for a down payment on a house and an equally difficult time qualifying for an affordable mortgage.

At least one generation of Americans will spend their lives as renters, denied the satisfaction—and potential financial rewards—of owning a home of their own.