Today the man who has become legendary for his predictions on QE and historic moves in currencies and metals warned investors they need to get ready for 2021 and “The Great Reset.”

So just like Humpty Dumpty, the system has already had a big fall. But the world still believes that this is all a fairytale with a happy ending. No one wants to recognise that Humpty is totally  broken and irreparable.

NO ONE CAN PUT HUMPTY TOGETHER AGAIN
All the king’s men, in the shape of the Fed and other central banks plus governments, are desperately trying to put Humpty back together again. The problem is that the glue just won’t stick. Back in 2007-9 and thereafter, massive amounts of glue were applied in the form of unlimited money printing and credit creation. The problem was that a remedy in big quantities serves no purpose if the quality is poor…

Fortunately for the king’s men, nobody realised that they worked with inferior material. Equity markets only care about quantity and there certainly was enough glue or printed money. So it has been all about quantity or printing a lot of worthless money. Why else would it be called QE or quantitative easing?

HOCUS POCUS ACTIONS
QE is one of these Hocus Pocus words, invented by TPTB (the powers that be), which sounds important and mysterious. But for us normal mortals it should be called MP or money printing. That’s all it is, but since money printing sounds quite crude, the Fed and Co. think they can get away with a posh word which nobody understands. All QE stands for is printing money in great quantities.

But let’s just understand that the glue or printed money which is supposed to fix the financial system is fake. There is no chance that all the king’s horses and all the king’s men can put the system together again.

A world which is used to a rising living standards based on debt and fake money is under the illusion that this is all that is required to create wealth. A fake world and an illusory financial system cannot survive without creating real values based on hard work with the production of goods and services. Sustainable wealth can never be achieved by financial wizardry and hocus pocus money.

A DUMBFOUNDED SYSTEM HAS DUG ITS OWN GRAVE
A few of us have understood that the end game would consist of unlimited creation of debt and fake money, not because anyone believes that the biggest debt bubble in the world will disappear by issuing more debt, but because this is the only remedy left to a totally dumbfounded system which has for years dug its own grave.

It is into this grave that Humpty has fallen. The king’s men believe that they can pull him out like they have for decades but this time it won’t work. 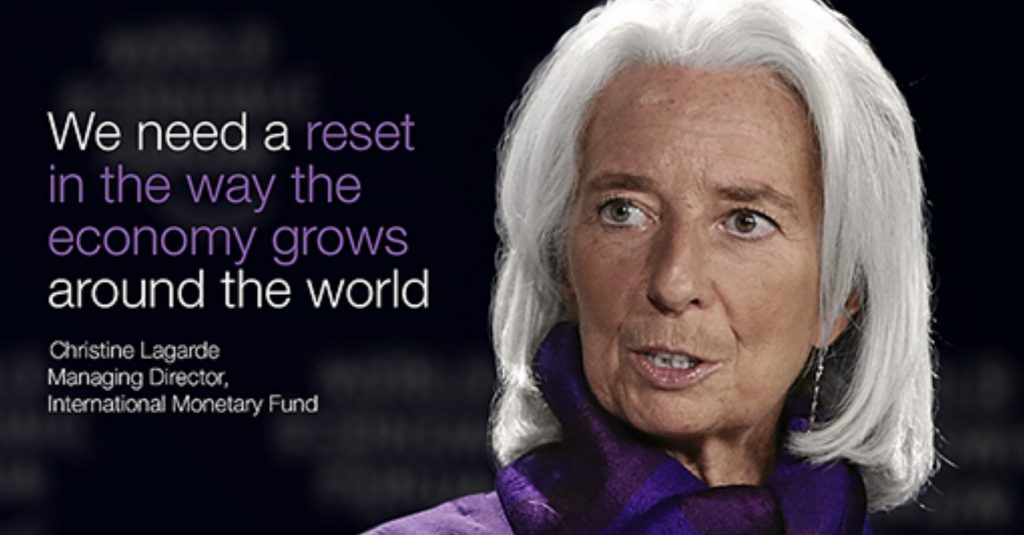 WORLD ECONOMIC FORUM PLANNING THE GREAT RESET
TPTB are desperately working on solutions. For example, the WEF (World Economic Forum) in Davos are calling the next Forum in early 2021 “The Great Reset.”

They have created a Strategic Intelligence Platform which will help the members to control the world. Strategic Partners of the WEF will be members of a number of platforms from which they intend to orchestrate the Great Reset. These platforms include “Shaping the future of: Technology, Blockchain, New Economy & Society, Future Consumption, Digital Economy, Financial and Monetary Systems, Trade, Cities & Infrastructure, Energy, Media & Culture, etc.

The WEF has developed the Fourth Industrial Revolution (4IR), which “will leave no aspect of global society unchanged.”

ORWELL’S 1984 IS HERE
All this sounds quite frightening but that is clearly the intention. George Orwell’s 1984 is not just approaching at great speed but also becoming more of a reality by the day.

There is only one major problem. Whatever wizardry and however much glue TPTB apply, there is just no way that a system which is totally broken can be repaired. The world has reached the end of the road and will need a reset.

But even if TPTB attempt an orderly reset with debt moratoria and a new artificial reserve currency like a crypto dollar, it can at best only fool the world for a very brief period.

A DISORDERLY RESET
The real reset, which will be disorderly, will inevitably happen thereafter. This will involve an implosion of the financial system including debt, stock, and property markets. Sadly Humpty will be totally buried in the rubble of this collapse.

As I have pointed out many times, the world can only attain real growth in a system which has eliminated the mega debt which can never be serviced or repaid. What must also implode are fake bubble markets and false money.

The transition to a sound system will clearly be very painful for the world but, sadly, it will be necessary.

A DANGEROUS INTERCONNECTED WORLD
Before we get there we will see more of the same, namely unlimited money printing, which has already started. But we have only seen the very beginning. The danger with a global financial system is that nobody can escape. Everything is totally interconnected and interlocking. A serious problem in a Hong Kong bank will instantaneously reverberate around the world and within minutes affect the whole financial system.

Take Deutsche Bank (DB), which many observers have for many years expected to fail. It has equity of €57B which is only 4% of their total balance sheet. In addition their gross derivative exposure is €44 trillion. The market cap is just €18B, well below the equity. So the market clearly doesn’t believe the net asset value is real.

A 5% bad debt write-off or a 0.13% loss in derivatives would be enough to wipe out DB. It would be surprising if the losses on the debt portfolio were less than 25% or derivative losses less than say 5%. Still these magnitudes of losses would bankrupt DB.

DERIVATIVES – A NUCLEAR BOMB
Derivatives are a nuclear bomb and when counterparty fails, the $1.5+ quadrillion bubble will burst in one fell swoop.

In a fractured global financial system where every single entity is under-capitalised. It will take very little to bring everything down at once. And that is not an improbable outcome in the next few years.

This brings us back to gold, which stands as La Grande Resistance against the broken Humpty or financial system.

It is no coincidence that gold is the only money that has survived every single financial crisis in history. For 5,000 years, there has been no permanent replacement for gold. And whatever alternative governments and central bankers come up with to solve the current crisis, it can never replace nature’s money. Gold is eternal money and the only reserve currency that has stood the test of time…For those who would like to read more of Egon von Greyerz’s fantastic articles CLICK HERE.

REFLATION TRADE: “Silver Is My Favorite Asset In The World Right Now”