TREND ALERT: JP MORGAN GANG RIGGED GOLD MARKET –
AMERICA’S “PUTRID CORPSE OF LIBERTY” HAS BEEN BURIED
July 26 (King World News) – Gerald Celente:  Is America the Land of the Free? Is it the Land of Liberty? Is it a Democracy?

According to Benito Mussolini, the champion of fascism, who said, “We have buried the “putrid corpse of liberty” and “Fascism should rightly be called corporatism, as it is the merger of corporate and government power”… his proclamations exemplify 21st century America.

By their deeds you shall know them!

As epitomized with the COVID War, federal, state and local politicians locked down all “non-essential” small businesses… but anointed the “Bigs” as “essential,” allowing them to rake in countless trillions of cheap money the government and central bank injected into the economy to artificially pump it up.

While the Bigs got bigger – with mergers and acquisitions hitting all-time highs last year and as billionaires’ wealth spiked more in the first 24 months of the COVID War than in 23 years combined – the little people of Slavelandia got poorer.

The draconian mandates in the fascist state of America – where the “corpse of liberty” has been “buried” – forced the peasants to stay home, social distance, wear masks, get the Operation Warp Speed Jab: No Jab, No Job, etc.!

Mussolini saw it coming: “Democracy is beautiful in theory; in practice it is a fallacy. You in America will see that some day.”

Welcome to that some day.

Mussolini’s fascism is the American Way.

From hedge funds to private equity groups, from billionaires to banksters, they control the equity markets, housing markets, media world (print, broadcast, social), real estate and the broad spectrum of businesses… the Family Dollar “investor” mob have hijacked family businesses. The “Bigs control the politicians. It is “the merger of corporate and government power” for all to see.

The little people are serfs… plantation workers of Slavelandia…

Hard Facts
On the market rigging front, take gold for example, the most precious of precious metals. With countless trillions pumped into economies and equities to artificially pump them up; with inflation hitting 40-year highs; with the U.S. and NATO ramping up the Ukraine war; with the U.S. head of the Defense Department warning that “The U.S. is ready to move heaven and earth to help Ukraine win the war against Russia” … precious metals prices should be soaring.

Instead, they are in decline. And for all the little people that believe in gold’s value and buy it because they see the dire socioeconomic and geopolitical conditions, they were robbed by the banksters bandits who rigged the markets.

Gold traders at JPMorgan Chase, the richest U.S. bank, did “whatever it takes to make money” and cheated the gold market for years with “spoof” trades, John Edmonds, an ex-Morgan gold trader, testified to a federal jury in Chicago earlier this month.

He was among several former JPMorgan traders serving as witnesses in the trial of Michael Nowak, longtime boss of the gold trading desk, gold trader Gregg Smith, and Jeffrey Ruffo, a hedge fund salesman. The three have been charged with conspiring to commit racketeering activity and several counts of fraud.

In a spoof, a trader creates a false indication of demand, Edmonds explained.

For example, if JPMorgan’s gold traders wanted to sell gold at a price higher than the prevailing market price, they would place buy orders above the current price, then add a huge order at a price even higher.

Traders at other companies would see the price rising and would buy gold to get in on the rising price, but the spoofers would cancel their larger, high-flying order before it could be executed.

Meanwhile, the price would have jumped and the spoofers could then sell their holdings at a higher-than-market price because they fooled the market into wrongly thinking gold’s price was trending higher.

The traders would employ the same strategy in reverse, driving gold or silver prices lower so they could buy at an artificially low price and then sell at a tidy profit when the spoof was erased and prices rose again.

The entire process would take no more than a few seconds’ worth of mouse clicks.

The trick was reliable enough that “everyone” on the gold desk used it several times a week, Edmonds testified.

Edmonds admitted to his crimes in 2018. When asked why he never reported his colleagues’ fraud to the bank’s compliance office, he said, “I would have been fired. This was my dream job.

I saw people trading for 20 years doing this.” Edmonds said. “How could I not do it?”

“We all traded that way,” Christian Trunz, another cooperating witness who formerly was a gold trader, testified.

Smith executed the spoofs so rapidly that his trading-desk cronies joked that he needed to ice his fingers to cool them down after tapping his mouse buttons, Trunz said.

“We fully believed this was a battle” between humans and trading algorithms on competitors’ computers, Trunz said.

“This was the first time when machines were interacting with humans on a trading platform,” he added. “It was man versus machine. Everyone has an ego.”

TRENDPOST:
Breaking laws is business as usual at JPMorgan Chase.

In May 2015, it was among five megabanks that pleaded to felonies related to rigging foreign exchange markets for years. JPMorgan paid $550 million in fines, estimated to be less than its profits from its illegal activity, and no one went to jail.

JPMorgan also was investigated by the European Union for its possible role in colluding with competitors to rig the credit-default-swaps market during the Great Recession.

In September 2020, the bank admitted to two U.S. felonies related to wire fraud and spoof trading in metals and U.S. treasury securities. It shelled out $920 million in penalties. No one went to jail.

It dropped charges on the three when the bank agreed to plead to the two.

A major nickel processing firm made massive bets that nickel’s price would fall just before the market tightened and nickel’s price shot up to record highs.

The exchange not only halted trading but canceled the trades that brought windfall profits to traders on the right side of the price trend.

Among the exchange’s largest shareholders: three divisions of JPMorgan Chase.

Tsingshan Holding Group, the nickel company that bet wrong and was threatened with catastrophic losses as a result, is a major JPMorgan client.

Since 2008, JPMorgan Chase has paid $37 billion in fines for committing a cornucopia of illegalities.

For presiding over, and never disturbing, a corporate culture that subordinates ethics and law-abiding to insatiable greed, JP Morgan CEO Jamie Dimon received a $3-million-dollar increase in his salary this year, lifting it to $34.5 million, and stock options worth about $52.6 million.

In bestowing the raise, the bank’s board cited Dimon’s “exemplary leadership.”

TRENDPOST:
Wall Street on Parade is among the top websites that report extensively on their criminal track record. On 29 June, they noted, “Despite this criminal conduct, federal regulators apparently have no problem with JPMorgan Chase continuing to hold an outsized share of a market it rigged.”

Their research found “a measured growth in precious metals derivatives at insured U.S. commercial banks and savings associations over the past two decades and then an explosion in growth between the last quarter of 2021 and the end of the first quarter of this year.”

And as for who’s controlling the show, they said that “In just one quarter, precious metals derivatives had soared from $79.28 billion to $491.87 billion. That’s a 520 percent increase in a span of three months.” 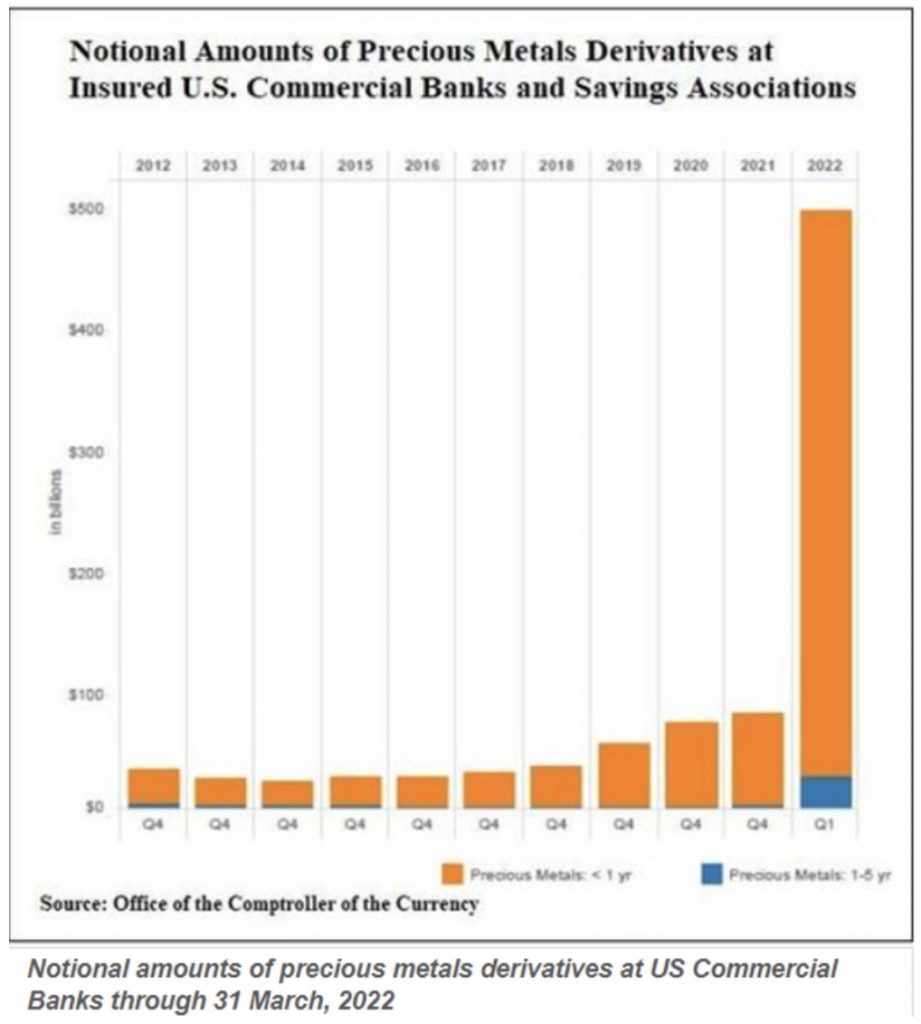