Today the man who has become legendary for his predictions on QE and historic moves in currencies and metals shared with King World News his terrifying predictions for the world as we head into 2023.

November 27 (King World News) – Egon von Greyerz, Managing Partner at Matterhorn Asset Management:  With US and Global debt exploding prior to both assets and debt imploding, let us look at the disastrous consequences for the world.

Debt explosion leading to the currency becoming worthless has happened in history for as long as there has been some form of money whether we talk about 3rd century Rome, 18th century France or 20th century Weimar Republic and many many more.

The current monetary era started with the foundation of the Fed in 1913 and the acceleration of debt and currency debasement since 1971 when Nixon closed the gold window. With just over 100 years into this era, it is now approaching the end, like they all do.

Global currencies are already down 97-99% since 1971 and we can now expect the final 1-3% decline for all money to become virtually worthless. This is of course nothing new in history since every single currency has always gone to ZERO. We must of course remember that the final 1-3% move means a 100% fall from today. The final collapse is always the quickest so it could easily happen in the next 2-5 years…

DEBT, DEBT AND MORE DEBT
Let’s look at how it has all evolved.

Although US debt has increased virtually every year since 1930, the acceleration started in the late 1960s and 1970s. With gold backing the dollar and therefore most currencies UNTIL 1971, the ability to borrow more money was restricted without depleting the gold reserves.

Since the gold standard prevented Nixon to print money and buy votes to stay in power, he conveniently got rid of those shackles “temporarily” as he declared on August 15, 1971. Politicians don’t change. Powell and Lagarde recently called the increase in inflation “transitory” but in spite of their bogus prediction, inflation has continued to rise. 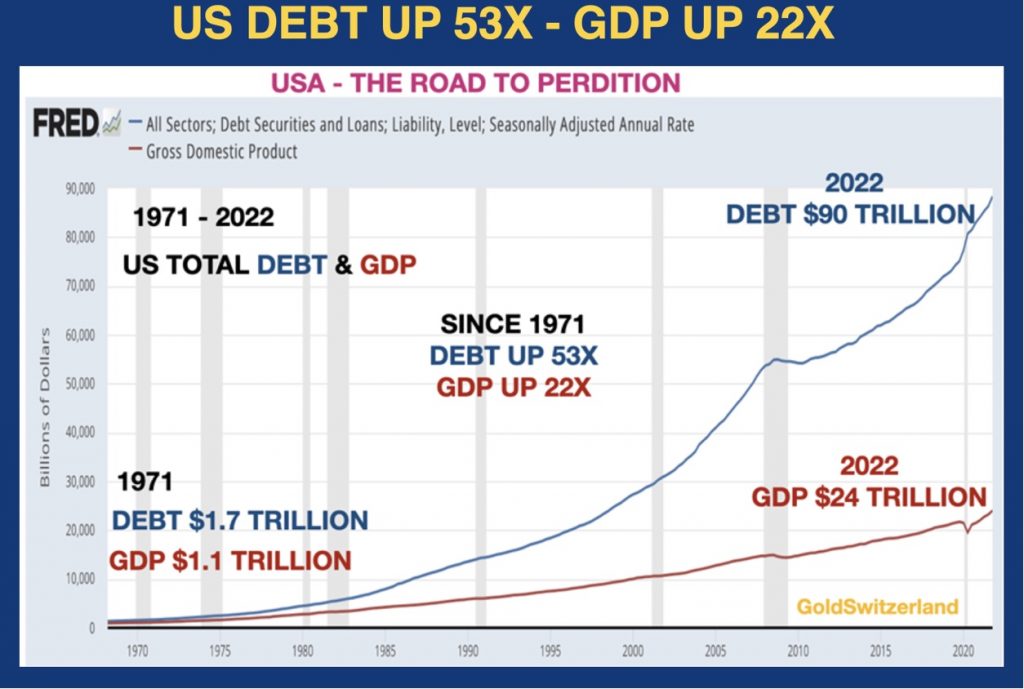 As the widening gap between Debt vs GDP in the graph above shows, it now takes ever more debt to achieve increases in GDP.  So without printing worthless money, REAL GDP would show a decline.

So this is what our politicians are doing, buying votes and fake growth through printed money. This gives the voter the illusion of  increased income and wealth. Sadly he doesn’t grasp that the illusory increase in living standard is all based on debt and devalued money. 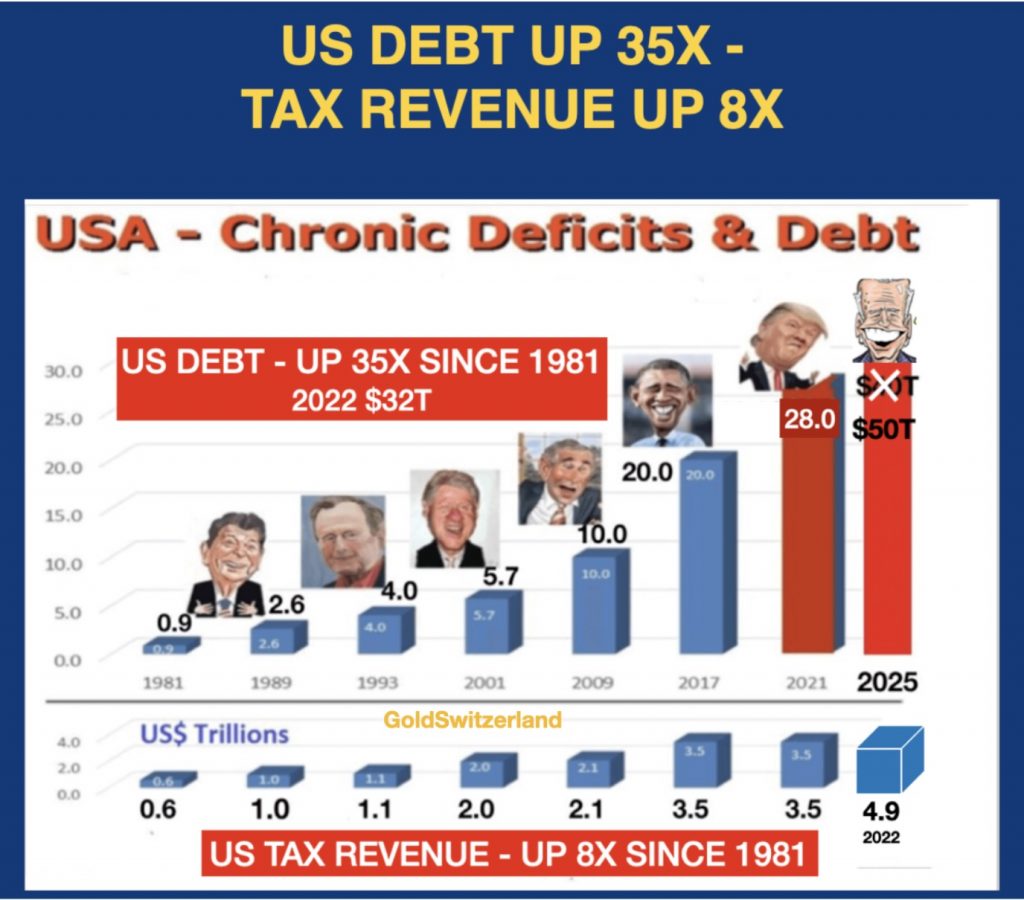 Since Reagan became president in 1981, US federal debt has on average doubled every 8 years. Thus when Trump inherited the $20 trillion debt from Obama in 2017, I forecast that the debt would double by 2025 to $40t. That still looks like a valid projection but with the economic problems I expect, a $50t debt by 2025 cannot be excluded.

So presidents know they can buy the love of the people by running chronic deficits and printing money to make up for the difference.

This disastrous borrowed prosperity, with ZERO ability to repay the surging debt,  will lead to one of the three consequences below:

3. BOTH OF THE ABOVE

The most likely outcome is number 3 in my view. The dollar will go to ZERO and the US will default.

Many people say that the US can never default. That is of course absolute nonsense.

If a country prints worthless debt that nobody will buy in a currency that no one wants to hold, the country has definitely defaulted whatever spin they put on it.

In the next few years, not just US but all sovereign debt will only have one buyer which is the country that issues the debt. And every time a sovereign state buys its own debt, it has to issue more worthless debt that nobody will touch with a barge pool.

And this is how money dies, just like it has throughout history. 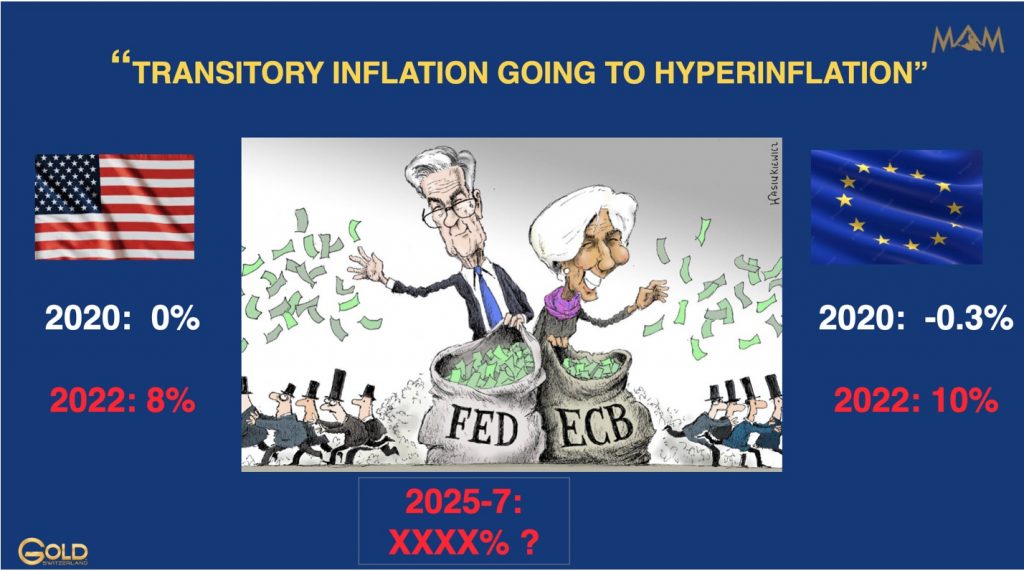 FED PIVOT?
So virtually every observer believes that the Fed (and ECB) will pivot and not just stop raising interest rates but lower them again.

In my view this will not happen except for possibly very short term. The 40 year interest rate downtrend finished in 2020 and the world is unlikely to see low or negative rates for many years or decades.  High inflation and high rates will continue for years. But as we see in the 40 year chart of the 10 year US treasury below, there will be many corrections in the coming uptrend. 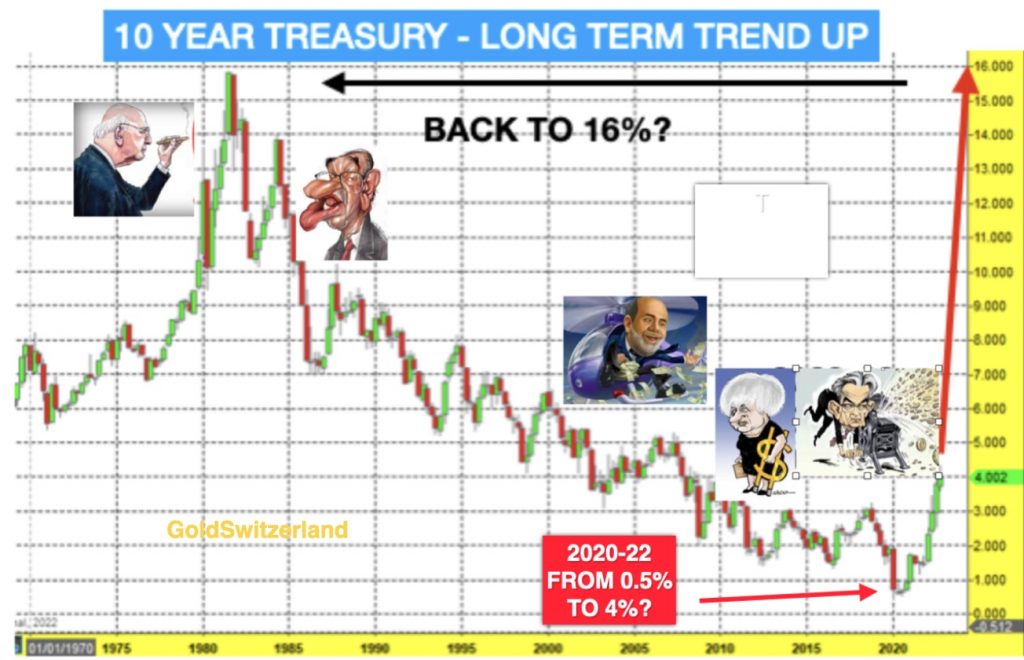 In August 2019, the hangover from the 2006-9 Great Financial Crisis hit the financial system again resulting in major support actions from the Fed and other central banks.

So the fresh problems emerged before Covid and before Ukraine. But those two new crises obviously exacerbated the systemic problems that had been put on ice for 10 years. This led to massive money printing and M1 in the US no longer increased at 6% annually but at a hyperinflationary 74% p.a. as the graph below shows.

$25 TRILLION GLOBAL LIQUIDITY/DEBT INCREASE AT ZERO COST
Central banks are always wrong and always behind the curve. They kept short term rates at zero or negative for over a decade. From 2009 to 2019 the balance sheets of major central banks increased by $13t. But then from Aug 2019 to 2022 an explosion in central bank debt took place, expanding their balance sheets $23t from $13t to $36t. All the same reasons that I discuss in the paragraph above regarding US money supply are obviously also valid for global debt expansion. 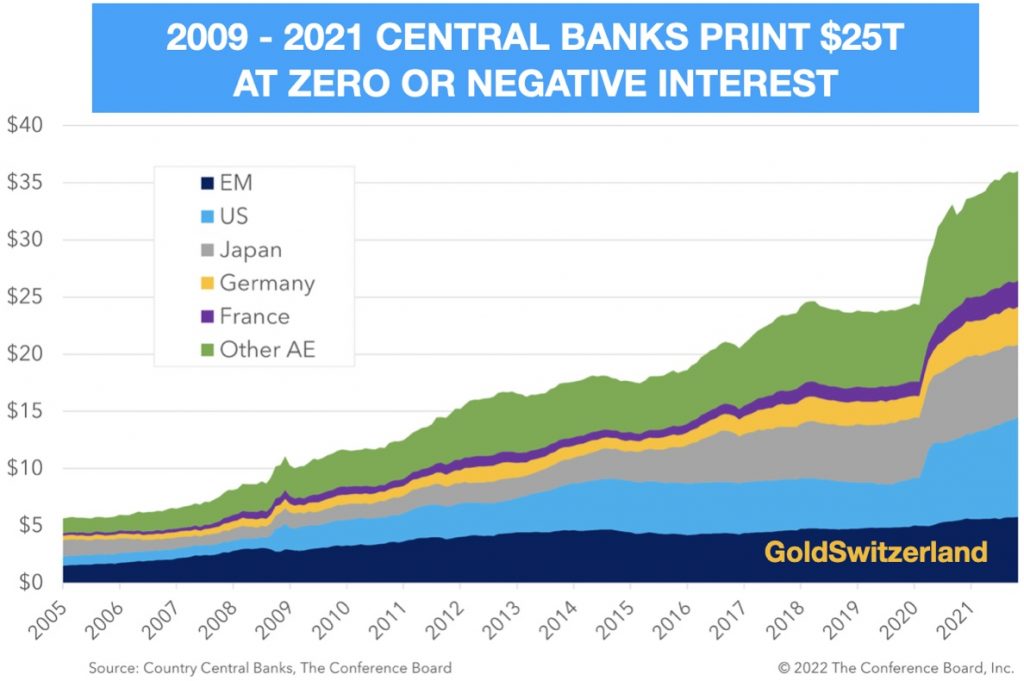 There is nothing like free money! The banks created this money at ZERO cost. They did no work and nor did they produce any goods or services. All they needed to do was to press a button. And with interest rates at zero or negative, many central banks were actually receiving interest from the lenders.

What a beautiful Ponzi scheme. You CBs print/borrow money and then they are paid for the pleasure of borrowing this money.  Any private swindler launching such a scheme like Ponzi or Madoff would spend the rest of his life in prison but the bankers are praised for “saving” the system.

What virtually no individual understands is that this free money then enters the financial system as having a real intrinsic value. As with all Ponzi schemes, the current financial system will collapse too as the holders of the fake paper money realise that the money is worthless and that the emperor is totally naked.

That will be the final phase of the current monetary system with unlimited money printing as the $2.3 quadrillion debt pyramid collapses which I discussed in this article and also in this interview with Greg Hunter USA Watchdog.

This is what the global financial system looks like: 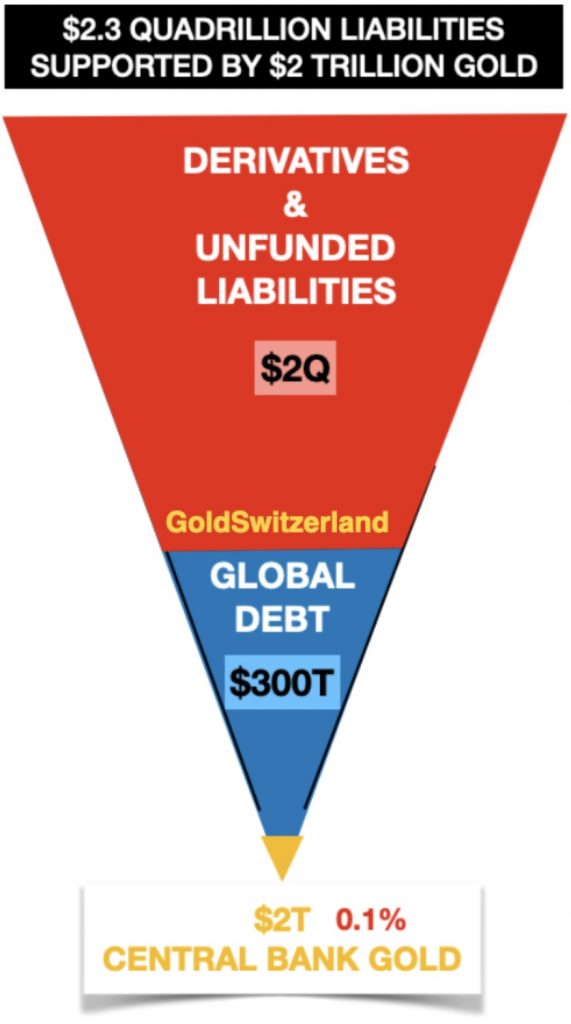 Within the next five years or so, the triangle is likely to be inverted with central bank gold as the foundation at the bottom. But instead of gold being only 0.1% of global liabilities, it will be as much as maybe 20%. That 200x revaluation of gold will be a combination of the value of global assets and liabilities collapsing and gold rising.

Personally I don’t believe in a lasting formal reset with a new currency system backed by gold. I cannot see the three major gold producers/holders China, Russia and India agreeing with the US on a revaluation. It is also questionable if the US has anywhere near the 8,000 tonnes of gold they are declaring. Also, China and Russia probably have considerably more gold than they are declaring.

Instead, after the fake paper market in gold has collapsed, the price must be based on supply and demand of unencumbered physical gold or Free Gold. But that can only happen after the current financial system based on fake money, debt and derivatives no longer functions.

CONSEQUENCES
But before that, the world must pay for the excesses of the last 50 years. The consequences will be dire as we are facing a major cataclysm or disorderly reset which will involve:

I sincerely hope that these predictions will not take place. Because if they do, everyone will suffer dramatically for an extended period. No one, rich or poor will avoid these problems.

I am naturally not predicting, like a Cassandra, that this disorderly reset will absolutely take place. Only future historians will tell us what actually happened.

But what I am saying is that the risk of a major catastrophe has never been higher in history, whenever it actually happens.

Physical gold and silver will not save you but clearly be the best financial insurance you can hold.

Most important is a support system of family and friends.

Remember also that in addition to family and friends, some of the best things in life are free like nature, music, books and many hobbies…This will link you directly to more fantastic articles from Egon von Greyerz CLICK HERE.

To listen to Nomi Prins discuss her surprising predictions for 2023 as well as why 2023 will be a huge year for the gold, silver and mining share markets CLICK HERE OR ON THE IMAGE BELOW.