Is there something sinister going on in the stock market?

Rotation Or Something More Sinister?
September 22 (King World News) – Liz Ann Sonders, Chief Investment Strategist at Charles Schwab:  As of this writing, it’s a rough start to the week for U.S. equities. Major indices attempted to find more stable ground last week, but volatility risks persist and the bears are winning the latest round. Policy risks abound—not just election-related, but both monetary and fiscal policy as well. There is little progress being made in getting the next fiscal relief package passed; while the rate of change of the Federal Reserve adding to its balance sheet has stalled. Given the bull market since March 23 was heavily supported by the boost to M2 money supply driven by both monetary and fiscal policy—nearly 25% year/year growth in M2 at the recent peak—the waning of that policy support remains a headwind. Basically, the shock and awe era of policy stimulus appears to be in the rear-view mirror.

Other risks include surging coronavirus cases in Europe, election uncertainty and ongoing pockets of speculative excess—particularly within the options market, and driven to a large degree by the short-term trading of many newly-minted small investors. I last wrote about this in late-August, including about the dominance of a handful of stocks—albeit easing a bit lately—as a warning sign (especially at the market’s highs earlier this month). As you can see below, the S&P 500 index overall is up +2.7% year-to-date (through Friday’s close); but there is a stark difference in the performance of the five largest stocks (Apple, Microsoft, Amazon, Facebook and Google/Alphabet), which are up nearly +29%, and the remaining 495 stocks, which are down -3.4%.

Disconnect?
I’ve done dozens of client webcasts since business travel ground to a halt. Since the March market low, the most-asked question on those webcasts has been about the perceived disconnect between the stock market’s ascent and the still-beleaguered economy. But the aforementioned narrowness in the market may in fact have been reflective of what’s been happening in the economy. This is not an endorsement of the big five stocks; but think about how much time you spend each day within the ecosystem of these companies—certainly amplified in the pandemic era. The big five have outsized market share in terms of their revenues, earnings, profit margins; and of course market capitalization. In contrast, large swaths of the economy remain in ill health; with countless industries and companies fighting for survival.

The big five are often lumped together as “tech” stocks; while they actually span three distinct S&P sectors: Technology (Apple and Microsoft), Communication Services (Facebook and Google/Alphabet) and Consumer Discretionary (Amazon). These are the three sectors having taken it on the chin since the most recent all-time high for the S&P 500 on September 2. That’s in stark contrast to their performance from the March low through September 2—with Technology and Consumer Discretionary the big winners. The first chart shows sector performance for three periods: March 23 low to September 2 high; February 19 prior high to March 23 low; September 2 high to September 18. The second chart below covers the entire year-to-date period through last Friday. 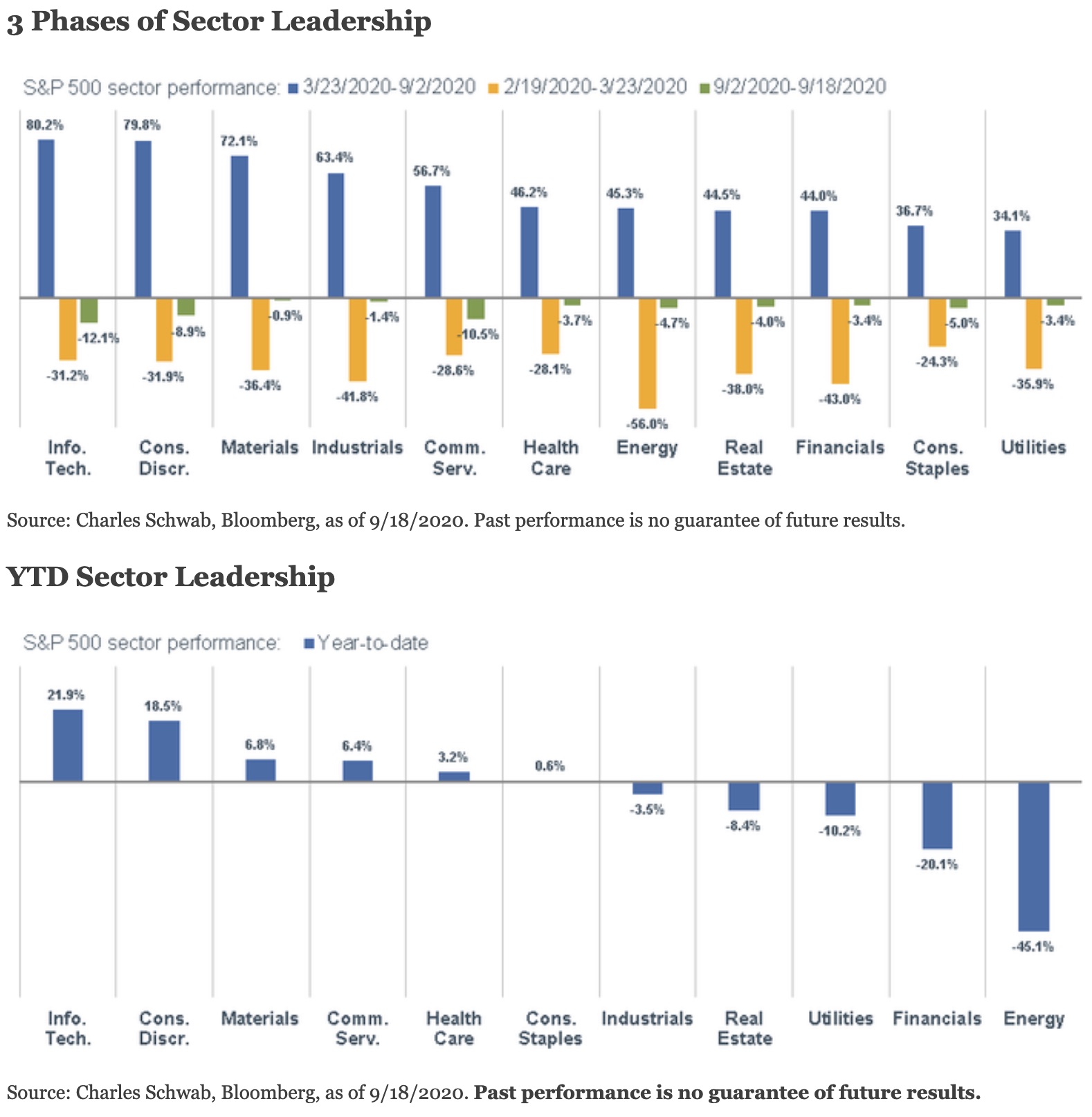 Not a mirror image of 2000
Much ink has been spilled about the narrowness in the market and the performance bias of the big five; especially given they represent a much larger weight in the S&P 500 today than was the case at the market peak in 2000. Back then, the largest five stocks were Microsoft, Cisco, General Electric, Intel and Exxon Mobil—representing “only” 18% of the S&P 500 on a cap-weighted basis vs. more than 24% at the recent peak (see chart below). 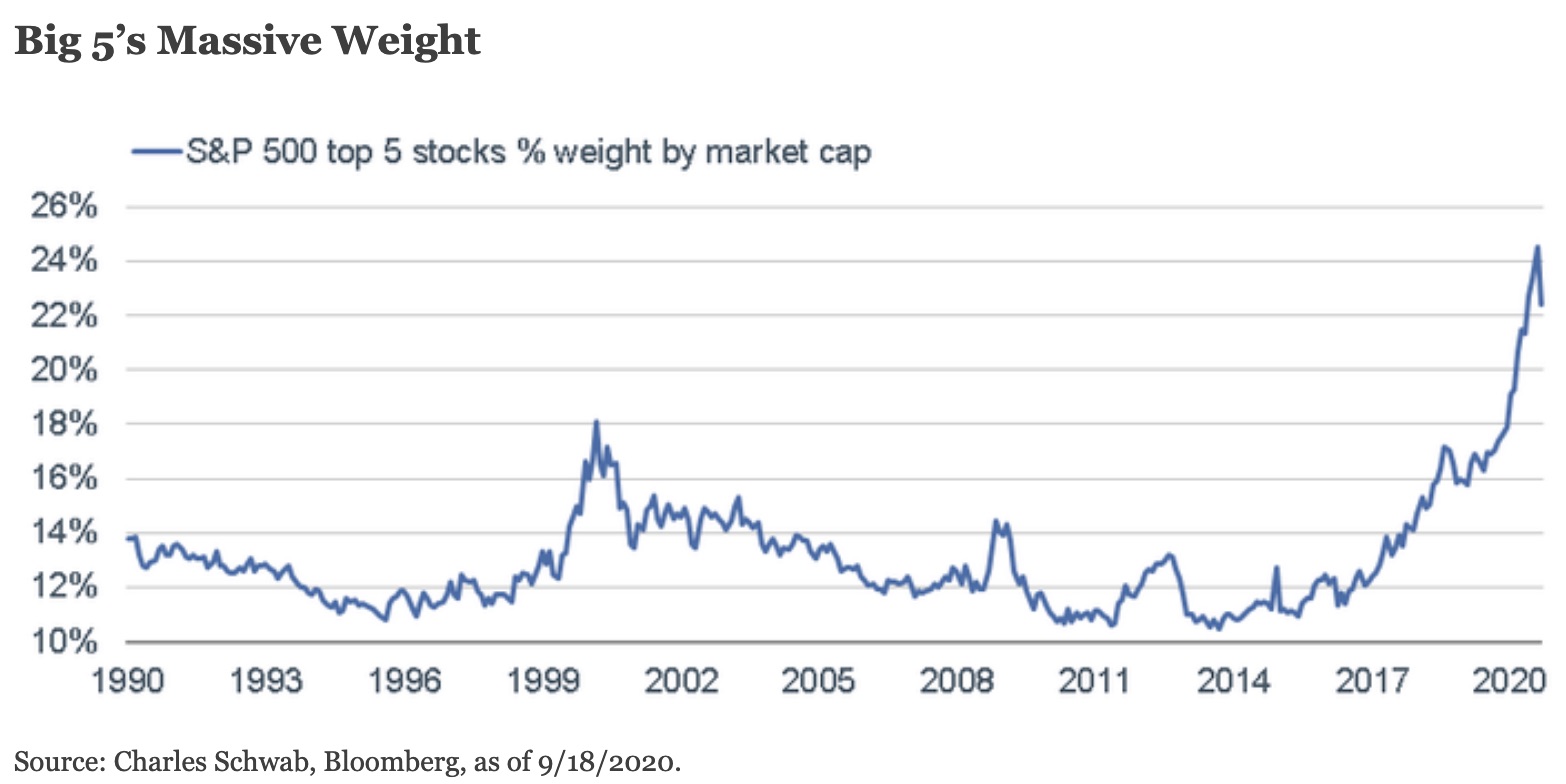 Valuations Stretched
Valuations are as stretched like they were in 2000; however, less so in the case of the largest stocks. Although the S&P 500’s forward P/E ratio recently hit heights not seen since 1998-2000; the forward P/E of the largest five stocks today is more “reasonable” at 33 relative to their average multiple of 60 in 2000 (see chart below).

ERP elevated; but rotation needs macro support
In addition—and this is one of the pillars of the bulls’ case—the equity risk premium (ERP) is quite elevated relative to where it was at the market’s peak in 2000 (see chart below). The ERP refers to the excess return that stocks provide over the risk-free rate of Treasuries. As such, a higher ERP suggests the market is fairly cheap; while a lower ERP (especially below zero) suggests the market is expensive. 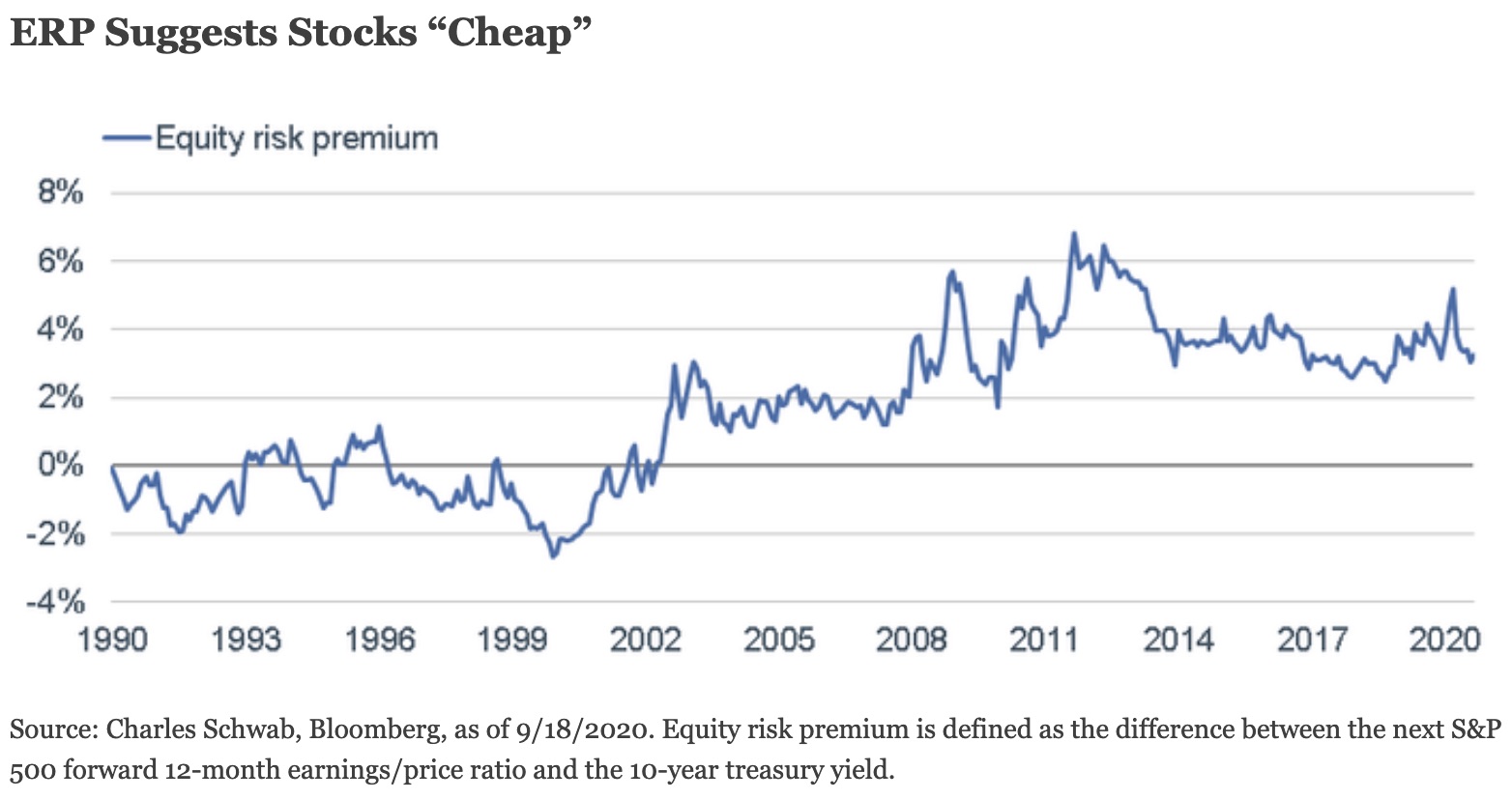 Notwithstanding the elevated ERP and strong fundamentals for the big five, traditional valuation metrics are stretched enough that we will need a meaningful earnings growth rebound. The rotation that’s been underway this month may be part of the process of easing some of this valuation excess. However, the move toward more traditional cyclical leadership—Materials and Industrials—likely also will need support from an improving economic backdrop. Absent the latter, a simple rotation could give way to more broad-based selling of equities than what’s occurred over the past few weeks.

Speculation running rampant
One area of concern continues to be the aforementioned speculation in the options market. Even after what were likely significant losses over the past couple of weeks (the big five are down nearly -17% since their respective peaks), retail volume for 10 or less options contracts actually increased in terms of speculative tilt last week. According to SentimenTrader, these traders spent 48% of all their volume buying call options to open (generally to speculate on rising prices)—down from a recent all-time high of 53%. The market maker selling the speculator the call does have to purchase the underlying stock as a hedge. This fed momentum on the upside; and although some of this has already adjusted with stocks in retreat, there may be more unwinding to come.

On the other hand, larger speculators recently locked in their most bearish bets on the tech-heavy NASDAQ 100 since early 2008, as you can see in the chart below. They are generally considered the non-contrarian “smart money” in contrast to smaller speculators referenced above. An important caveat is that for much of the period of excess speculation on the call side by small traders, they’ve been right to have pressed their bullish bets. What we also don’t know is whether these same traders will pivot to put buying if the correction accelerates. For now, their bullish bet-pressing is in stark contrast to what the larger speculators are doing.