They Don’t Have The Gold For This Takedown, All Eyes On The Dollar, Plus Collapsing Confidence

They don’t have the gold for this takedown as all eyes remain watching the US dollar, plus collapsing confidence.

They Don’t Have The Gold For This Takedown
September 19 (King World News) – Garic Moran:  Does anyone honestly believe New York & London have enough physical Gold to supply the global demand that will explode at $1650?

Own Physical While You Can Still Get It
Graddhy out of Sweden:  Physical gold, silver and platinum should be your base line in these historical times. Gold is insurance and other 2 plus miners for speculation. Real physical you can touch comes first, then very selected non-bank vaulted services. Direct ownership is a MUST, no financial paper products…

All Eyes On The US Dollar
Nautilus Research:  Keeping an eye on the US Dollar Index …. (intersection of parallel channels.)

US Dollar Index At A Major Intersection:
On The Road To 120 Or Pulling Back?

Collapsing Confidence
Peter Boockvar:  The September NAHB home builder sentiment survey saw its index fall another 3 pts m/o/m to 46 after dropping by 6 pts in August, 12 in July and in the 6 months prior. It’s now declined each month this year not surprisingly considering the steep rise in mortgage rates on top of the sharp home price increases. The estimate was 47. 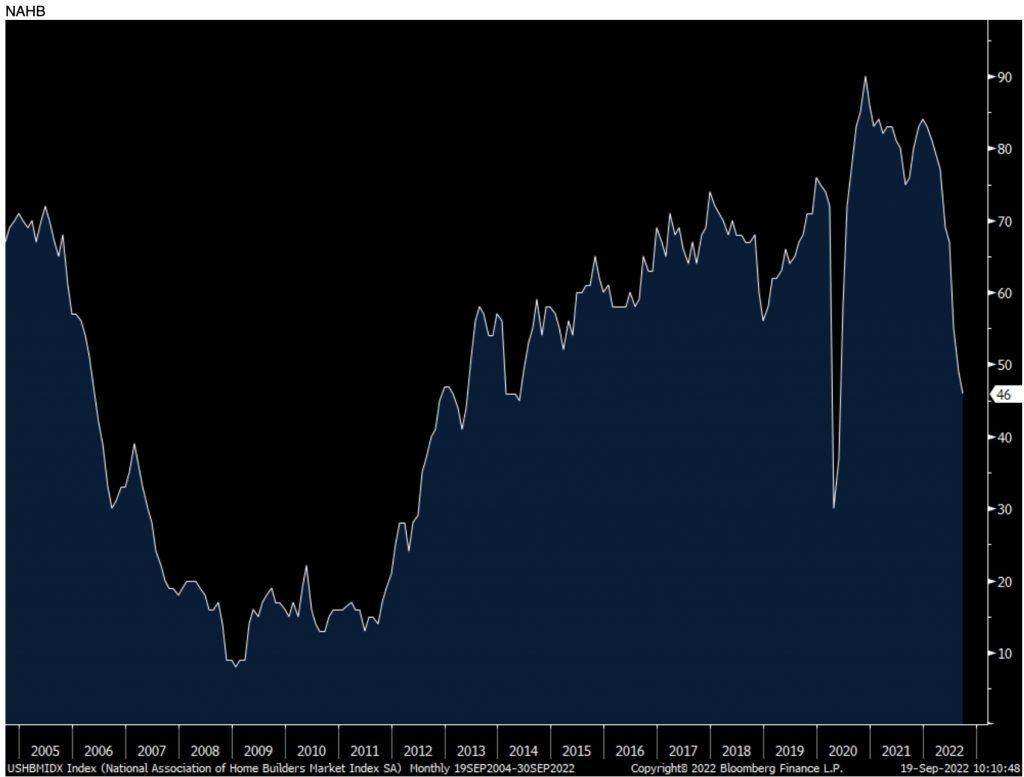 Present conditions fell 3 pts to 54 while the Future outlook was down by 1. Of note too, Prospective Buyers Traffic dropped by 1 pt to just 31 with the reminder that 50 is the breakeven point between up and down.

Prospective Buyer Traffic Has Collapsed To The 2nd Lowest Level Since 2013! 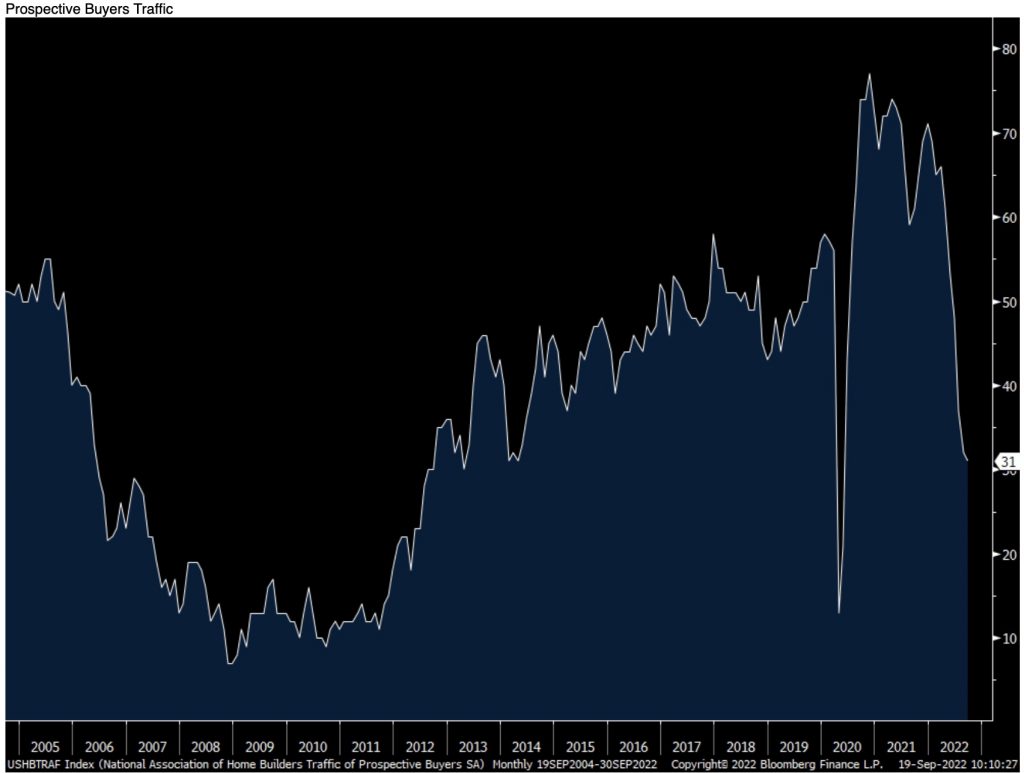 We know the buyer is facing the affordability challenge and “builders continue to grapple with elevated construction costs.” In response, “more than half of the builders in our survey reported using incentives to bolster sales, including mortgage rate buydowns, free amenities and price reductions.” As to the number of builders that are reducing prices, “24% of builders reported reducing home prices, up from 19% last month.”

Bottom Line
Bottom line, the faltering demand picture we know, the still high construction costs we do too, even if moderating. The only big question remains is to what extent do prices fall, both for new and existing homes, from here or at least stop going up.

There wasn’t much of a rate move in response to this data but the 10 yr yield is still doing a dance today with 3.50%…

Strikes!
We know we were just on the cusp of a major union rail strike in addition to other strikes in other industries we’ve heard about in the last few weeks. To quantify the number, I learned in the WSJ over the weekend that Cornell University has a ‘Labor Action Tracker’ that measures the number of strikes nationally. From January 1st, 2021 thru September 16th, 2021 there were 150 strikes. From January 1st, 2022 thru this past Friday there has been 273. https://striketracker.ilr.cornell.edu/.

Rates
There is no data today of note overseas and we know the big news this week will come from the Fed, BoE and BoJ. With the Fed, we are most likely going to get the last 75 bps rate hike in this cycle, with a downshift to 25-50 bps from here and I wouldn’t be surprised if Powell told us that in recognition of the economic impact the tightening is already having and will continue to as it cycles through the economy in the coming quarters (and would lead to a market rally if the case). He’ll still try to talk tough on inflation however. The consensus for the BoE is another 50 bps increase but there is a definite possibility of 75 bps. With respect to the BoJ, we know Kuroda’s job is getting ever more difficult and while his stubbornness will likely remain intact in keeping YCC at the current rate, I will not be surprised if something changes soon.

Ahead of this, bond yields are rising again in Europe and in turn the US. The German 10 yr bund yield has broken above its mid June high. At 1.80%, it’s at the highest level since January 2014. 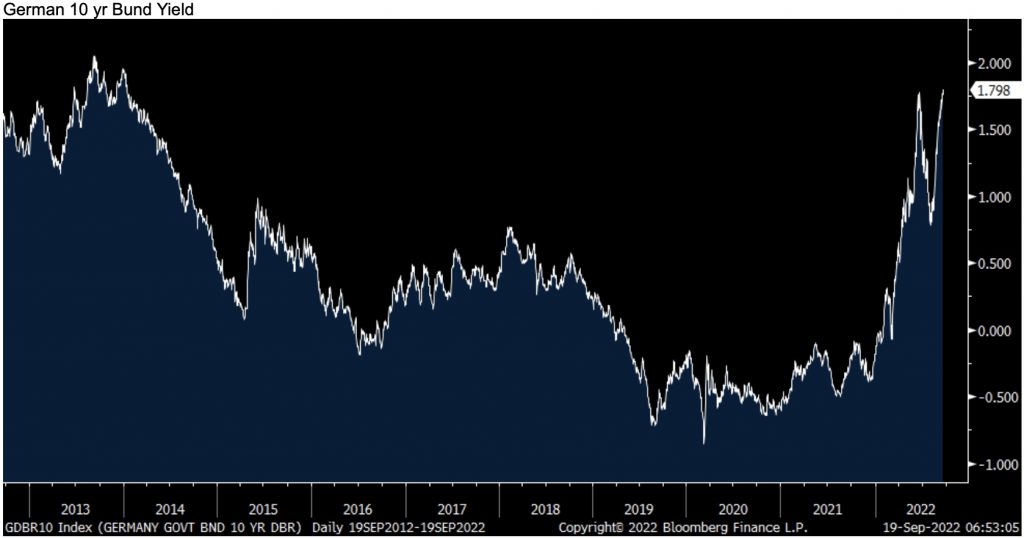 They’ve Failed Miserably
The ECB’s mission creep into climate was given some details today as they want their corporate bond holdings to be more focused on those companies with good climate scores. This nonsense use of a central bank whose sole mandate is price stability at which they’ve failed miserably at and where they never should have been buying corporate bonds to begin with will only lead to undesirable political and economic outcomes.  https://www.ecb.europa.eu/press/pr/date/2022/html/ecb.pr220919~fae53c59bd.en.html

China Ending Covid Theater
With Chengdu in China fully reopening again, there is also a story that Hong Kong might end its hotel quarantine for those traveling to the city. Just maybe the Chinese are getting close to ending their obsessive approach to Covid after next month.

Central Banks Comment As Gasoline Prices Hit Highest In 7 Years, And Interest Rates Rising But What Will Happen When Stock Markets Collapse?