NEM Closing Out The Quarter At All-Time Highs! 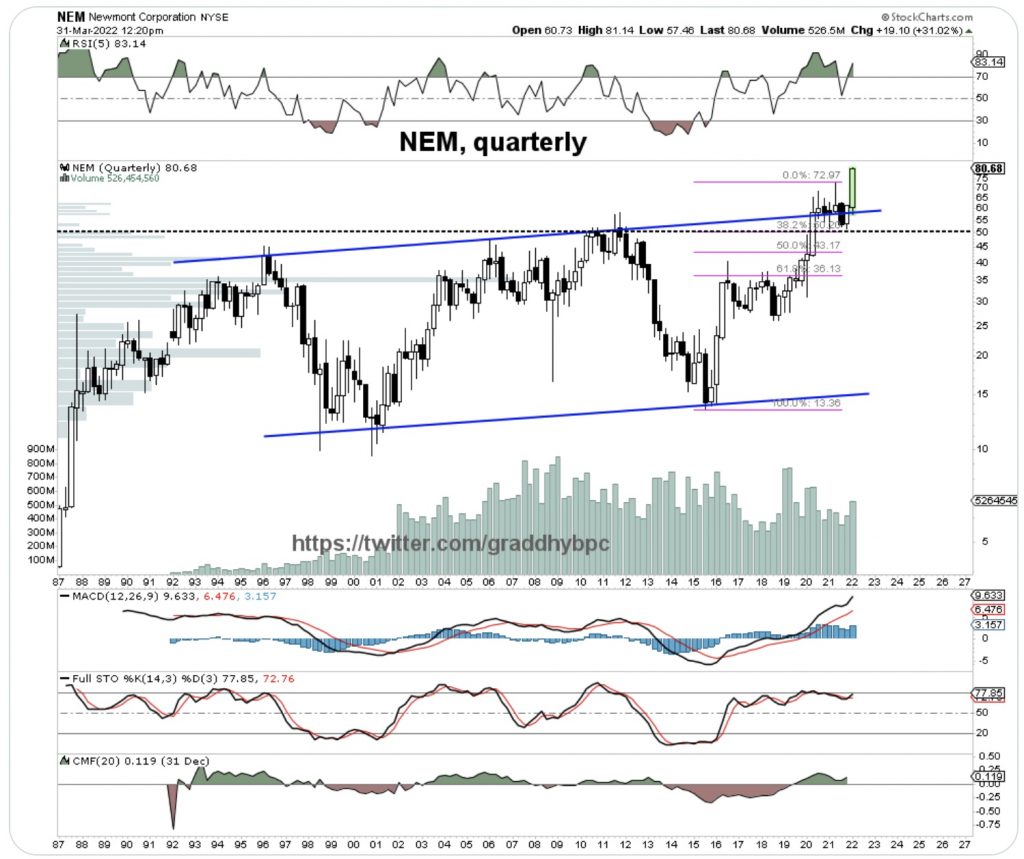 Oh Canada!
Graddhy out of Sweden:  Depending on your home currency, this chart might be good input when it comes to the matter of buying resource stocks in USD or CAD. If CAD is going to massively outperform USD, which this chart suggests, the positive currency effect with CAD listed stocks will be noticeable.

Canadian Dollar To Soar vs US Dollar 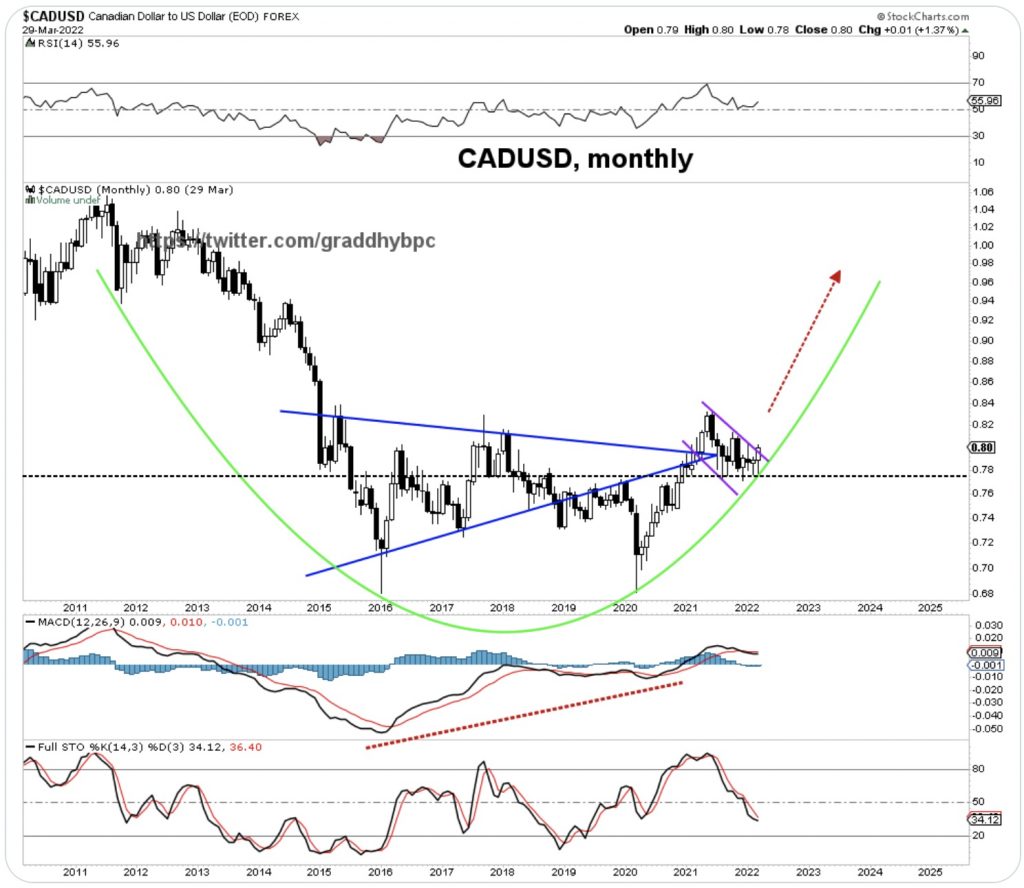 Russia vs US: Who Will Get The Gold Medal?
Luke Gromen:  Plot twist: One month on from the Russian invasion of Ukraine, Russia is not selling its Central Bank gold reserves, but the US is selling SPR oil reserves. Let’s watch…

Junior Miners Finally Ready To Outperform Or “Catch Up”
Otavio Costa:  Junior miners look ready for a major catch up to the upside with gold already near historical levels. 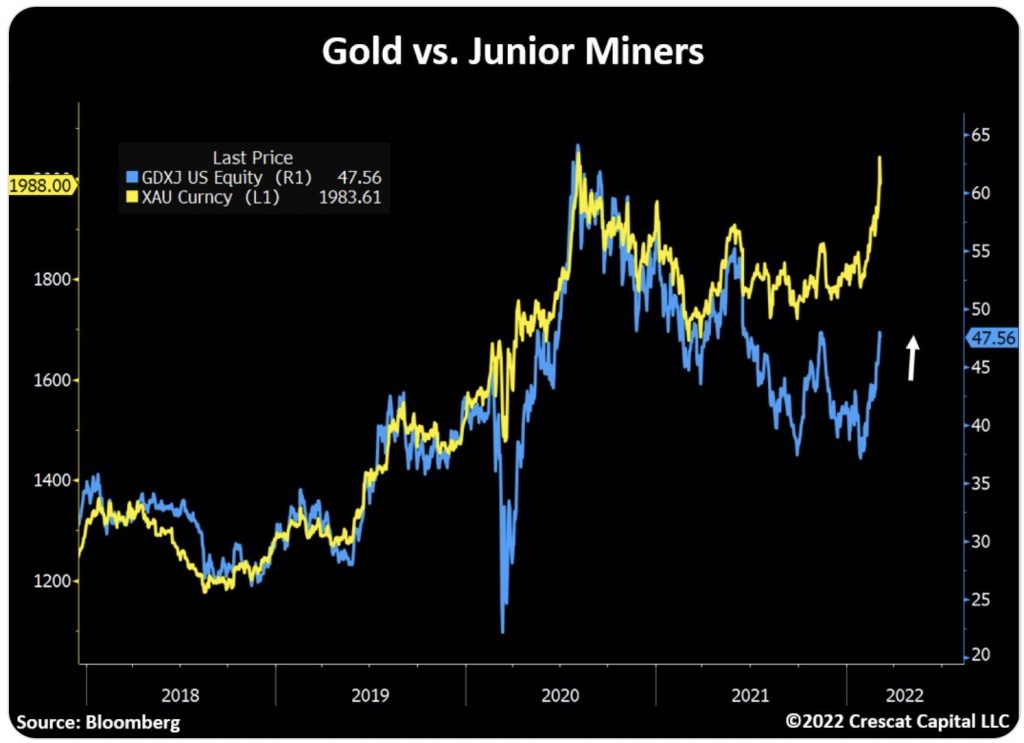 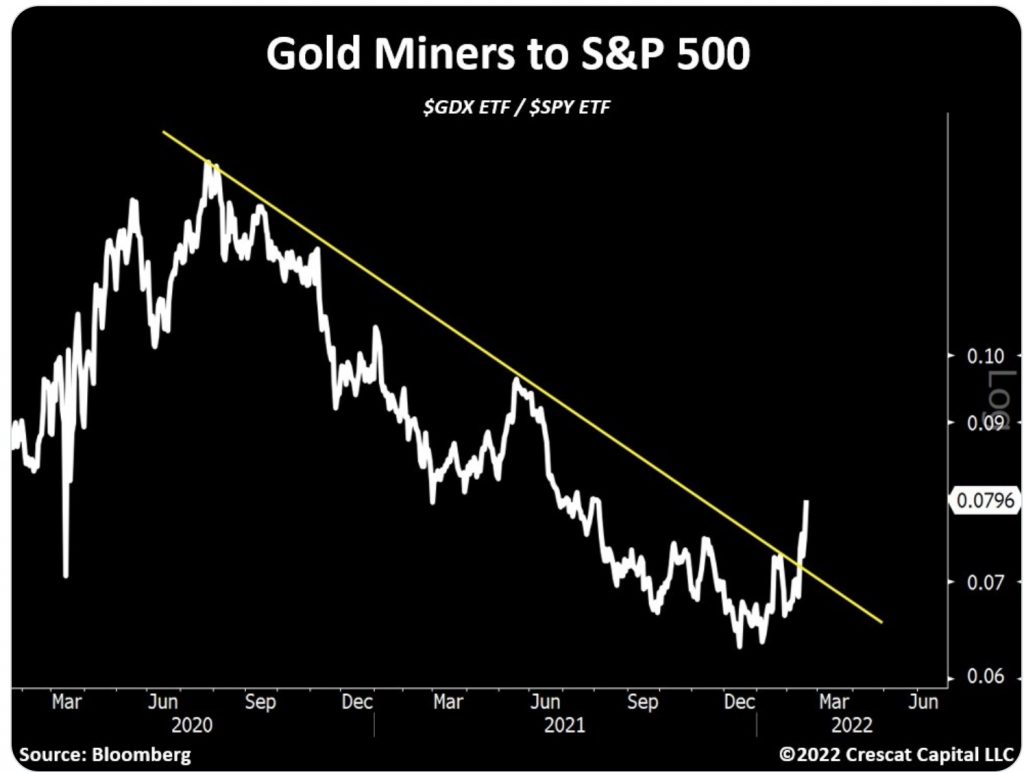 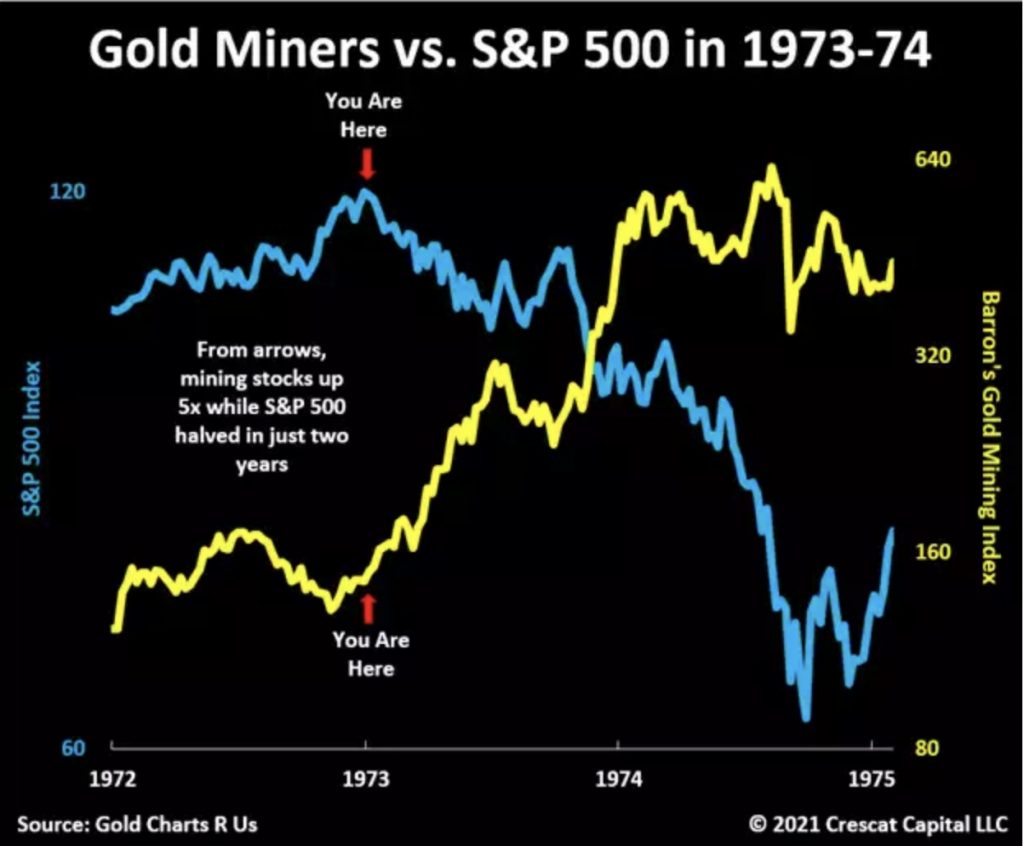 Again, Miners Soar As Stock Markets Collapse
Otavio Costa:  Similarly, from the peak of the tech bubble, the NASDAQ Composite declined 78% in just two and half years while gold and silver mining equites would soon begin a new secular bull market. 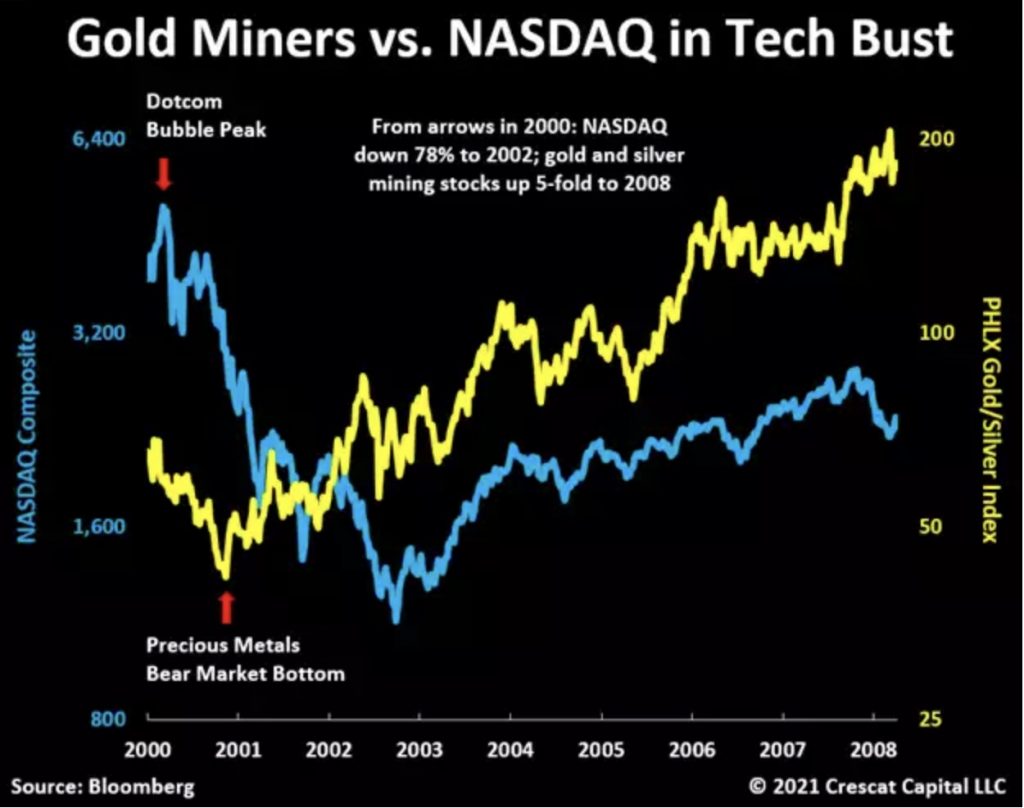 One Of The Strongest Stocks In The World
John Lewins: “2021 represented another major step forward for K92. Operationally, Kainantu delivered record throughput, production and finished the year particularly strong. Q4 also provided our most complete quarter to date, including record quarterly production, mine throughput, mill throughput, strong metallurgical recoveries, low all-in sustaining costs of $672/oz and, once again, a positive grade reconciliation to the resource model. This resulted in the Kainantu operation beating our updated guidance on both production and costs. Financially, K92 is the strongest position it has ever been, with a record cash balance of $71m and no debt, well positioning the Company to fund its growth and exploration.

Massive Expansion Of Gold Production
In terms of production growth, we achieved the Stage 2 Expansion run-rate of 400,000 tpa (1,100 tpd) in late-Q3, and in early Q4, announced a Stage 2A Plant Expansion to increase throughput another 25%, as the mill has continued to show that it is very capable of operating at much higher throughput rates. Q4 recorded 21 days with throughput exceeding 1,300 tpd and a daily record of 1,538 tonnes. Commissioning is expected for Stage 2A in the second half of 2022, at a plant expansion capital cost of approximately $2.5m. Subsequent to year-end, we announced a high-grade updated Kora resource estimate and maiden Judd resource estimate, providing the basis for the Definitive Feasibility Study and Updated Preliminary Economic Assessment for the additional expansion, Stage 3. Work is well underway on these studies.

Ramping Up Exploration For 2022
The recent strong results from surface exploration drilling at Kora South and Judd South, also show very promising potential and plans are well underway to ramp-up exploration, with the second drill rig now operating and a third drill rig planned near-term. Concurrently, Kora South and Judd South surface sampling and mapping is underway, stepping out along strike towards the interpreted A1 Porphyry. Our property wide airborne geophysics results also show that exploration is potentially just scratching the surface in terms of both vein and porphyry exploration. We see an elevated likelihood that our exploration budget will increase for 2022.

Major Support From Papua New Guinea And Australia
Lastly, I would like to underscore that these significant accomplishments were achieved during the burdens from the COVID-19 pandemic. Our workforce has been extraordinary during the last two years and our resiliency towards COVID-19 continues to strengthen. The support of the Governments of both Papua New Guinea and Australia have also been a major factor in our success as well.” K92 Mining, symbol KNT in Canada and KNTNF in the US.