By Andrew Adams from Raymond James
March 29 (King World News) – The major theme of our comments recently on the near-term direction of the stock market can best be summed up with one word – uncertainty. That’s what happens when the indicators we trust, and even the price action of the market itself, start sending mixed messages that make it difficult to provide the clear green light that everyone desires. I know I’m sure getting tired of writing about the confusion, and I’d wager everyone playing along at home is a bit exhausted from reading about it every day, but we unfortunately have to play the cards we are dealt and this has been a market trying to decide if it should fold or not.

“Buy The Dip” Crowd Hard At Work
The good news, though, is that it does appear the “buy the dip” crowd is continuing to provide somewhat of a floor to how low the indices can fall, and they have once again worked their magic over the last two sessions to help negate some of the technical damage that was done last Tuesday. Naturally, this development led to a flood of emails yesterday asking if that was it and the bottom has been made, and my general response was, “I certainly hope so, but I still think it’s a little too early to tell for sure.”

Undoubtedly, the last two days have been steps in the right direction toward ending the overall weakness that has plagued the market for most of March. The combination of Monday quickly filling its own gap and then Tuesday building off that recovery certainly makes for a potential reversal on the charts, but the major indices are still in patterns of lower highs and lower lows, and this small rally has only brought the S&P 500 back up to the halfway point of the “candle” from last Tuesday’s sell-off.

Adding To The Confusion…
So, as I told some people yesterday, more aggressive trader types or accounts that still need to put a lot of cash to work may want to take the chance that Monday’s low was a near-term bottom, but keep in mind that low only represented a 3.28% decline from the previous all-time high in the S&P 500, which barely even qualifies as a dip. Of course, adding to the confusion and perhaps supporting the bottom call is the fact that the average stock in the market has been down much more than 3.28% and may have already experienced much of the pain from this bout of weakness (more on that on pages 3 and 4), but I’d actually feel more comfortable saying “that was it” if the averages themselves fell just a tad bit more.

And yes, I know that the indices don’t have to fall just because I’d like them to, so in the pages ahead I discuss a little more about what will need to happen for me to start to lean more toward the bull side again, as well as provide some stocks that may be worth a look just in case the market surprises and rallies once more. So, without further ado…

Breadth Indicators – Last 3 Months
More mixed signals when it comes to breadth on the NYSE. Two of our indicators have improved over last week’s readings while the other two have fallen slightly. To help make me feel a little better, I especially want the NYSE Common Stock Only Advance-Decline Line to improve some more and return to making a pattern of higher highs and lows. For now, though, just more uncertainty. 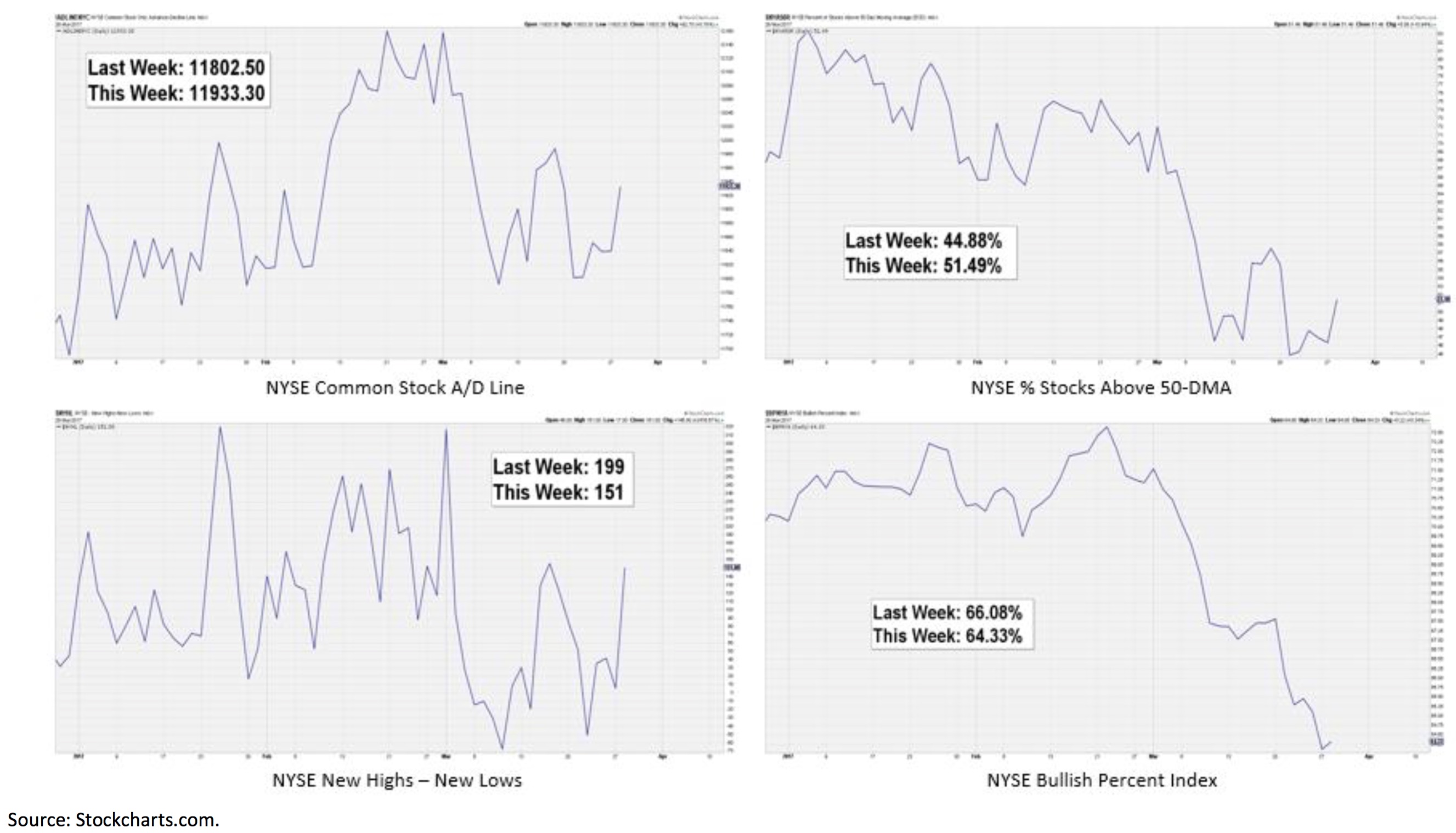 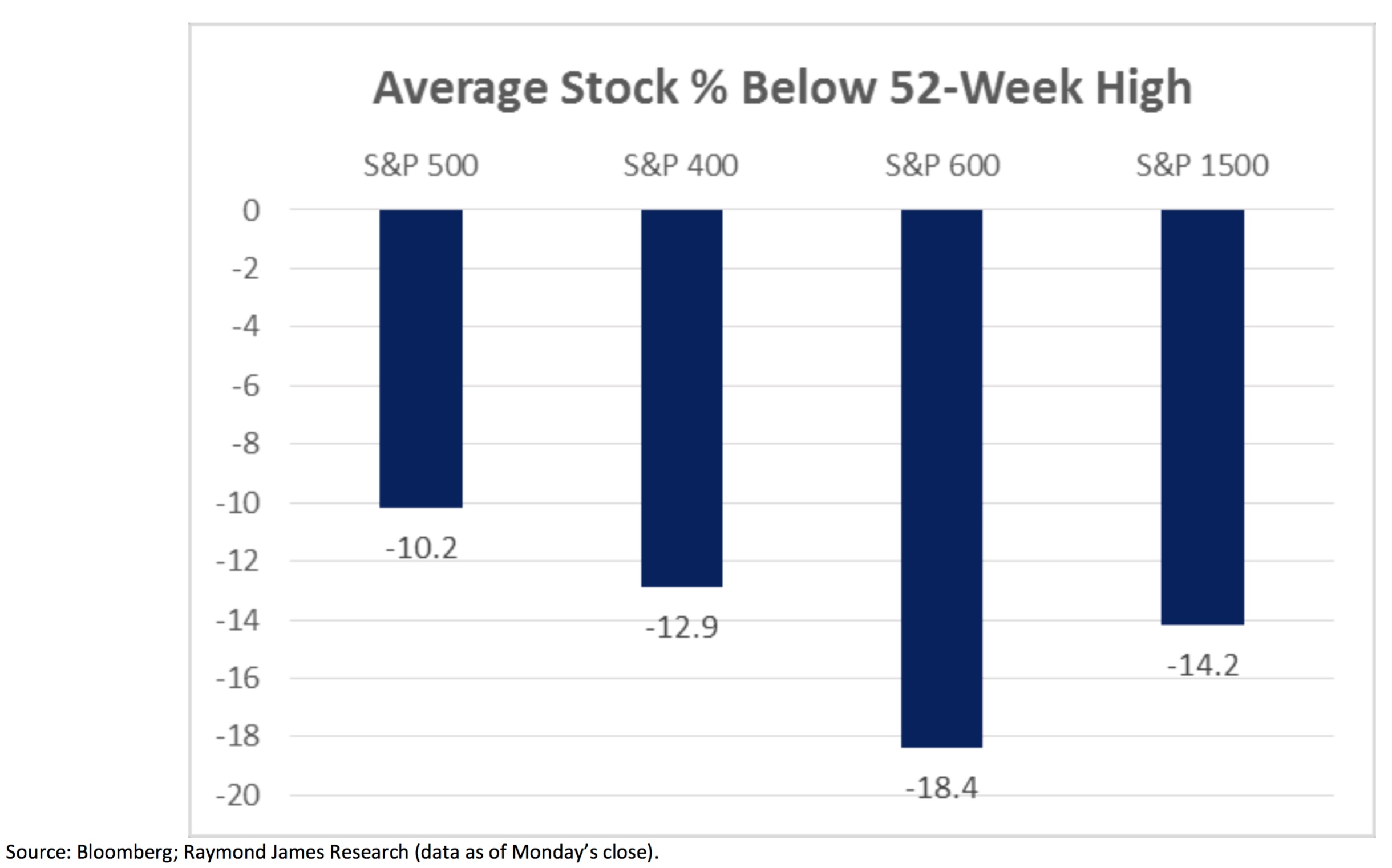 Average Dips by Sector
Adding to the uncertainty, there is also a wide disparity between the sectors holding up well and those that have struggled. The average technology and utilities stock, for instance, was just a little more than 5% below its 52-week high as of Monday, while the average energy stock had fallen more than 20%! This inconsistency across sectors has aided in keeping the S&P 500 from falling too much because when some areas of the market are struggling, others have been gaining ground. 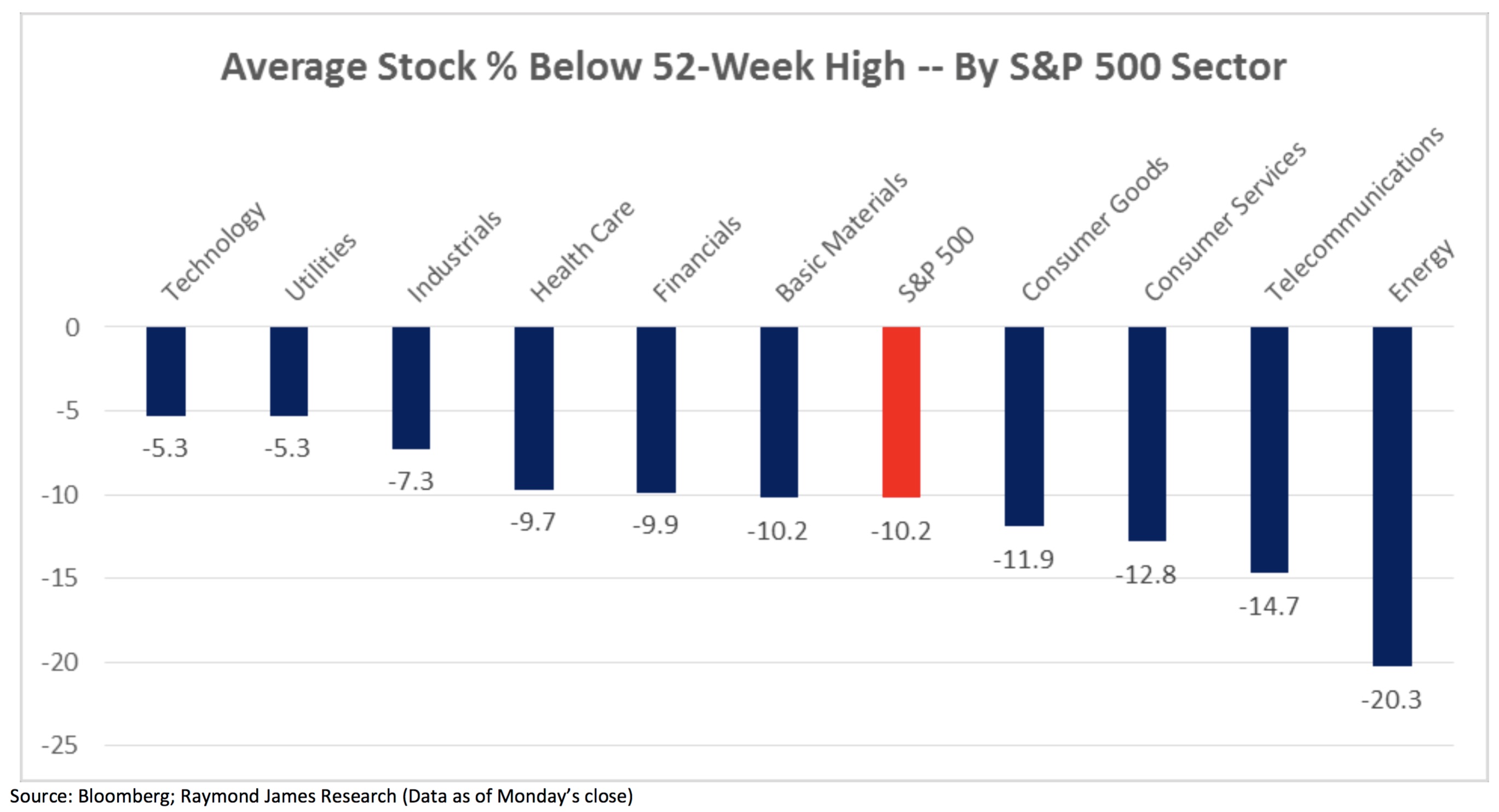 Was That It?
Once more, the candles from the two previous sessions have the look of a reversal when judged on their own, but there’s still some work to do before the technical damage on the charts is fixed. The near-term is still trending downward, with both a pattern of lower highs and lower lows in place (red/green arrows) and the resistance line connecting the March 1 and March 15 highs needing to be overcome. Keep in mind, too, that the trendline that had been in place since the day before the election broke last week and all this rally has done so far is take us back to where we were in the middle of last Tuesday’s poor session.

Funny How Technical Analysis Works Sometimes
I included this exact same chart last week with all the lines in the same place. If you will recall, I targeted the 2280-2320 zone in that circled area to possibly be where support would come into play, but the S&P 500 has not fallen all the way down there at this point. However, the rally this week has brought the index back up to kiss the underside of that red resistance line that seems to have slowed the positive session yesterday. If the index can’t overcome that line, the circled area may still be in play after all. 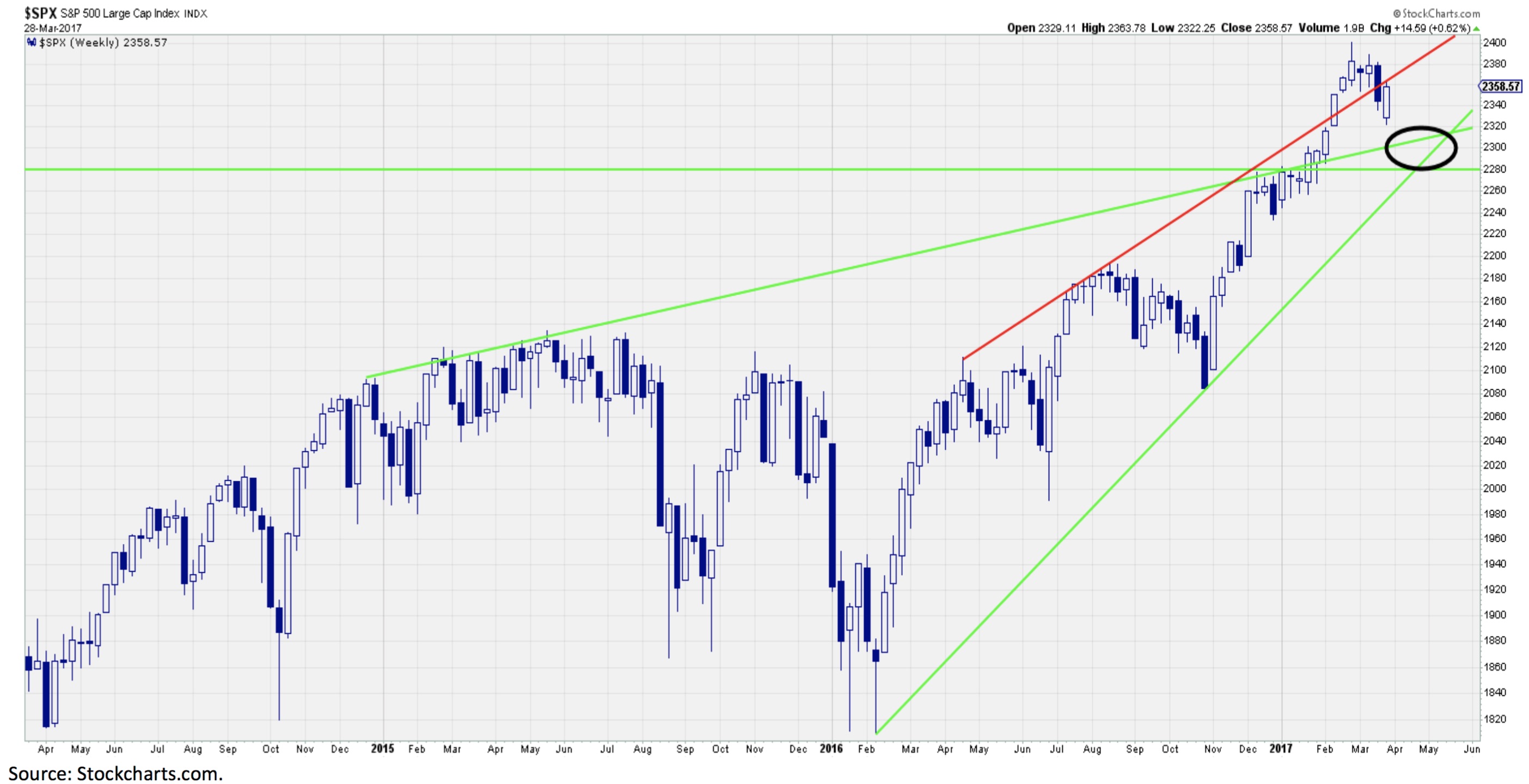 Finally Time for Energy?
As stated earlier, the energy sector has been the biggest drag on the market the last few months, with the average energy stock in the S&P 500 down more than 20% from its 52- week high as of Monday. Yet, there are some signs that energy could be finding some support, as the price of the Energy Select Sector Index made a lower low on Monday, but did so with less downside momentum as measured by the Relative Strength Index (RSI; lower panel). This divergence between price and the indicator could mean the down move is running out of steam, and the energy sector was actually the best-performing area of the S&P 500 yesterday. There also seems to be some support just under Monday’s low as well, further adding to energy’s attractiveness. 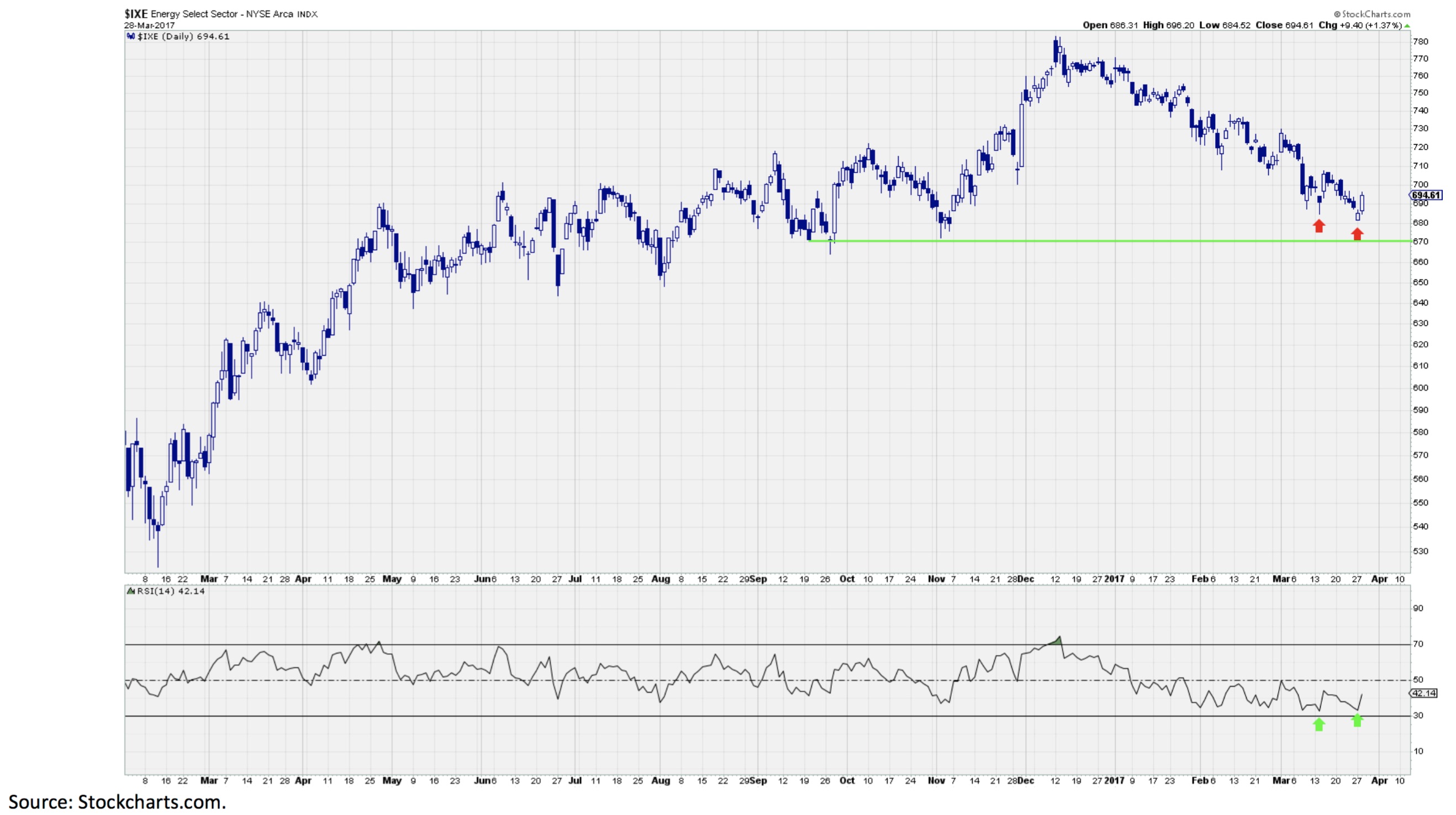 Oil Hit Bottom?
Of course, the potential upside of the energy sector will have a lot to do with how the price of oil behaves over the coming weeks. It has obviously been struggling lately, but it does appear to be clear that the $47 level is being heavily supported by the market. Three sessions over the last couple of weeks have bounced right around $47, and more aggressive types may feel this is a strong enough sign to start dipping back into oil and energy stocks. However, should $47 fall, it would be expected that oil would experience another leg downward. 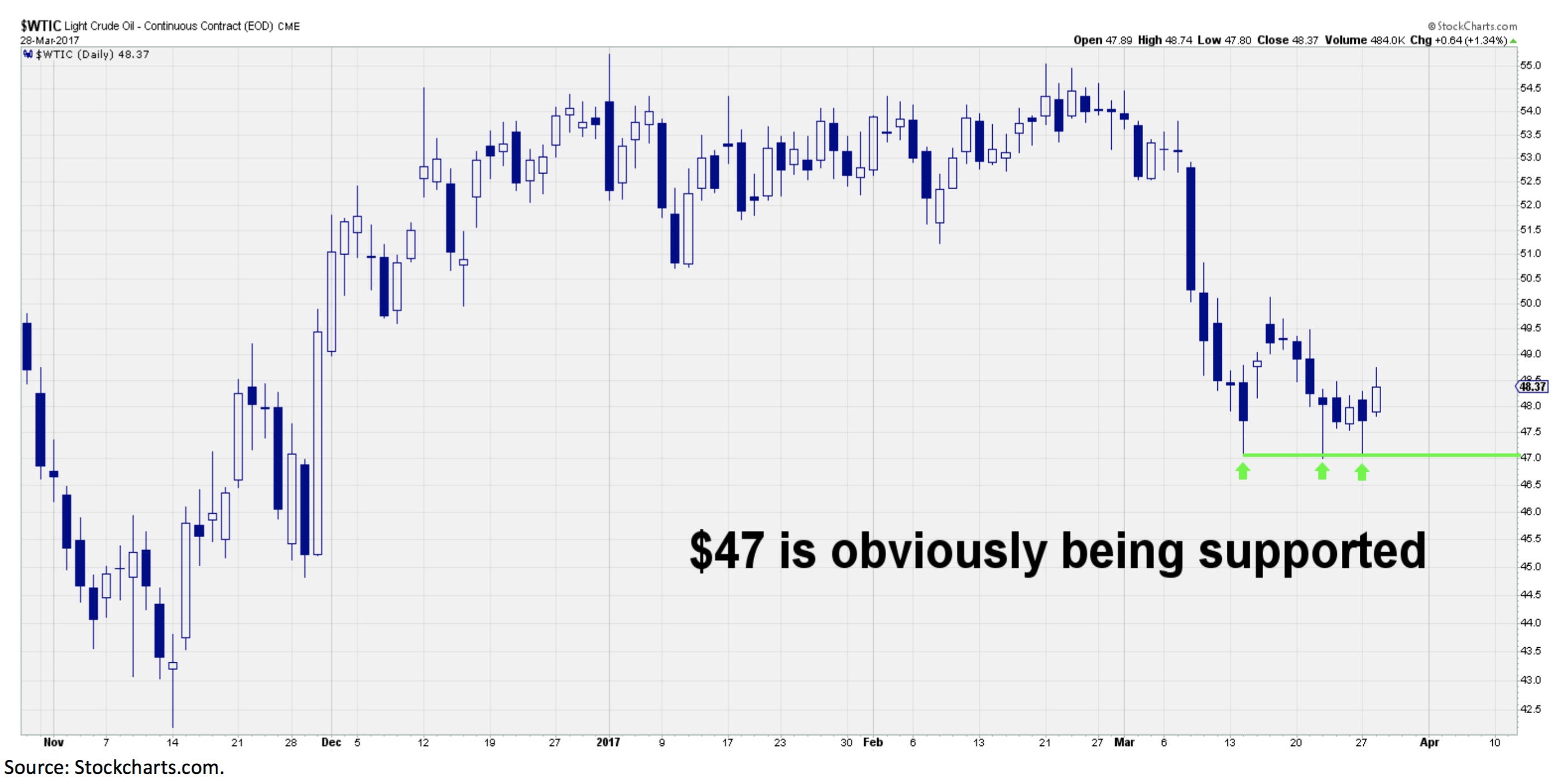 King World News note:  I would just add to what Adams has said regarding crude oil, that commercial short positions are fresh off an all-time record after the recent short covering by the commercials. This means that any rallies in the crude oil market may be suspect (see 23-year chart below). 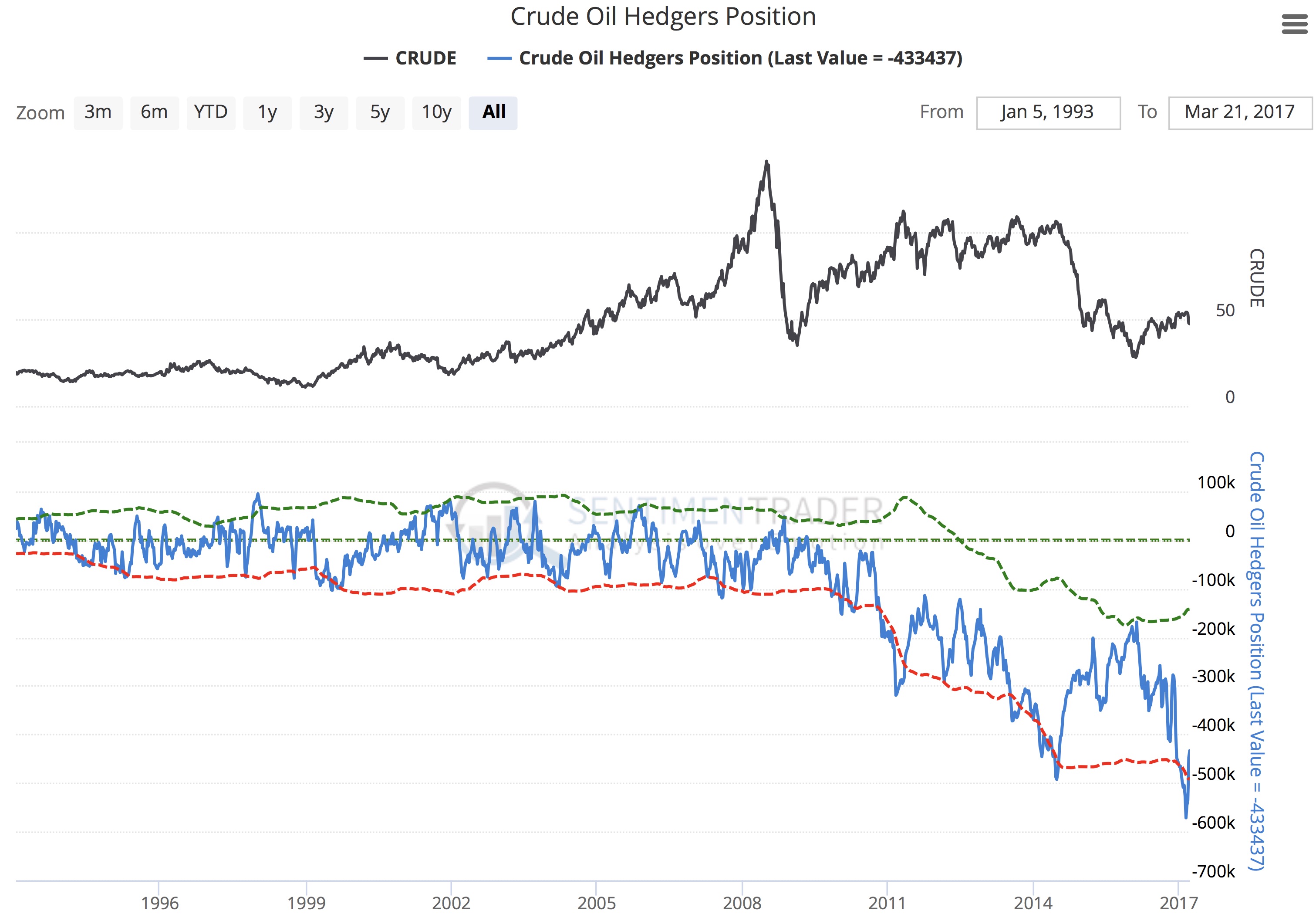