Golden Charts On Golden Week
October 3 (King World News) – From top Citi analyst Tom Fitzpatrick:  “Instead of a quiet Golden Week, the eve of which saw a decent clean out in precious metals, we have been greeted into the fourth quarter with heightened volatility across markets. Gold charts are suddenly back in vogue.

Attention has rotated towards the US economy and the Fed. The poor Manufacturing ISM data has awakened the market to seriously question whether the US is immune to the global downturn and consider back to back cuts at the Fed – the October FOMC meeting has effectively become “live” with 17 bps of cuts now priced in. US 2 year yield is only 4 bps above the trend low and the USD (US dollar) looks vulnerable.

In these circumstances, as has been highlighted over the past many weeks, the JPY (Japanese yen) performs well. USD/JPY is posting a double top in the short term, at risk of seeing a bearish outside week, and continues to look like it can test 99 over time.

$2,000 Gold
It is no coincidence to us that in such a market Gold has also begun to rebound – the uptrend has resumed. With the above in mind, the Gold/JPY chart may be particularly telling. As volatility rises, Gold at 200,000 yen and $2,000 may not look so unreasonable…

Gold’s Flag Pattern
Having risen in a channel, Gold corrected down also in a channel which has created this ‘flag’ pattern. (See chart below). 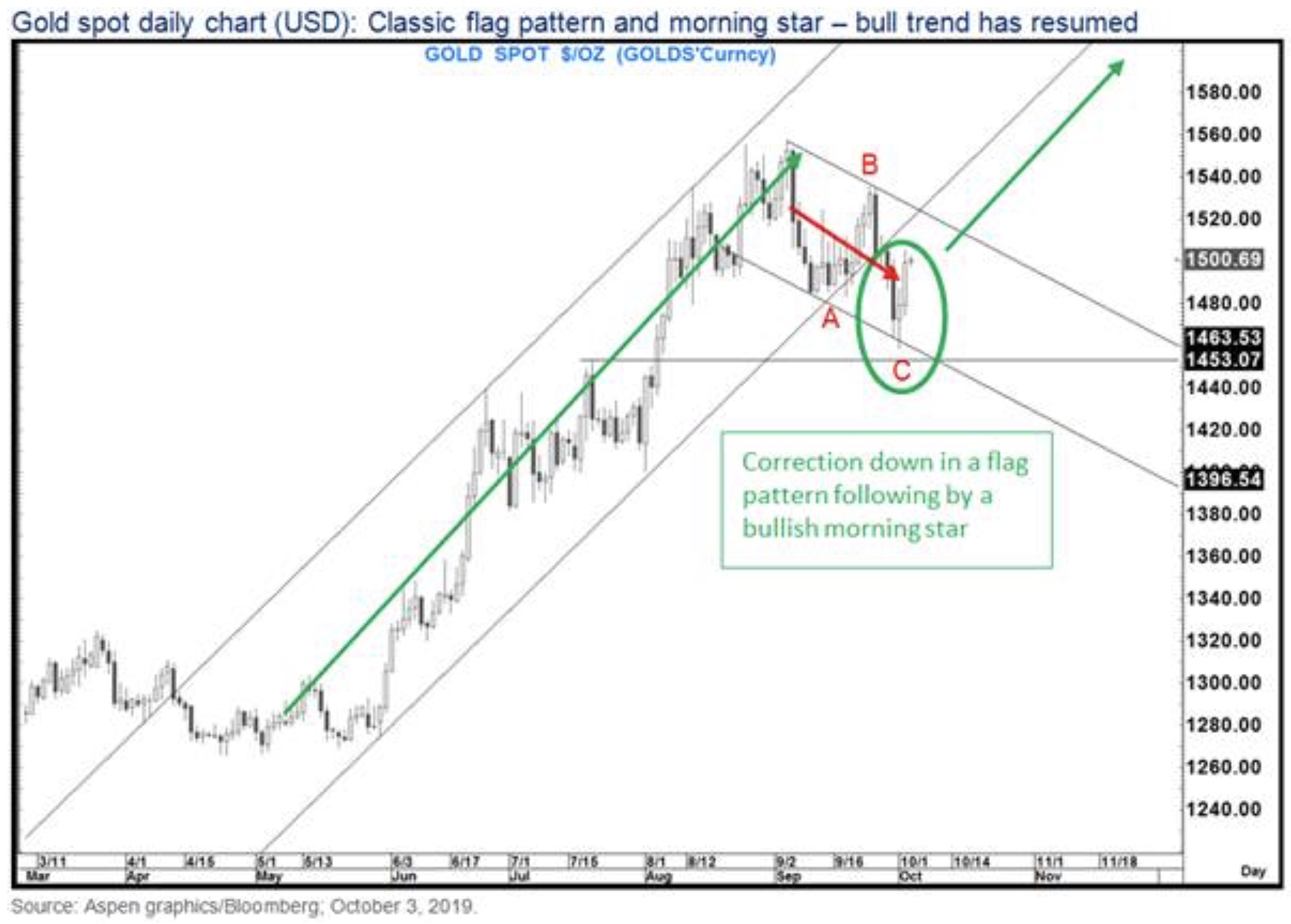 This is a continuation pattern and reflects the corrective nature of the recent move down.

In addition we fell in 3 waves (ABC) which is typical of a correction. From the base of the flag we see a bullish ‘morning star’ — a strong move down followed by some indecision and then a strong rally.

The break level now is the top of the flag which is at $1,526 today and falling by approximately $1/day.

At this rate we will be posting weekly hammer patterns on Gold and Silver (see charts below). 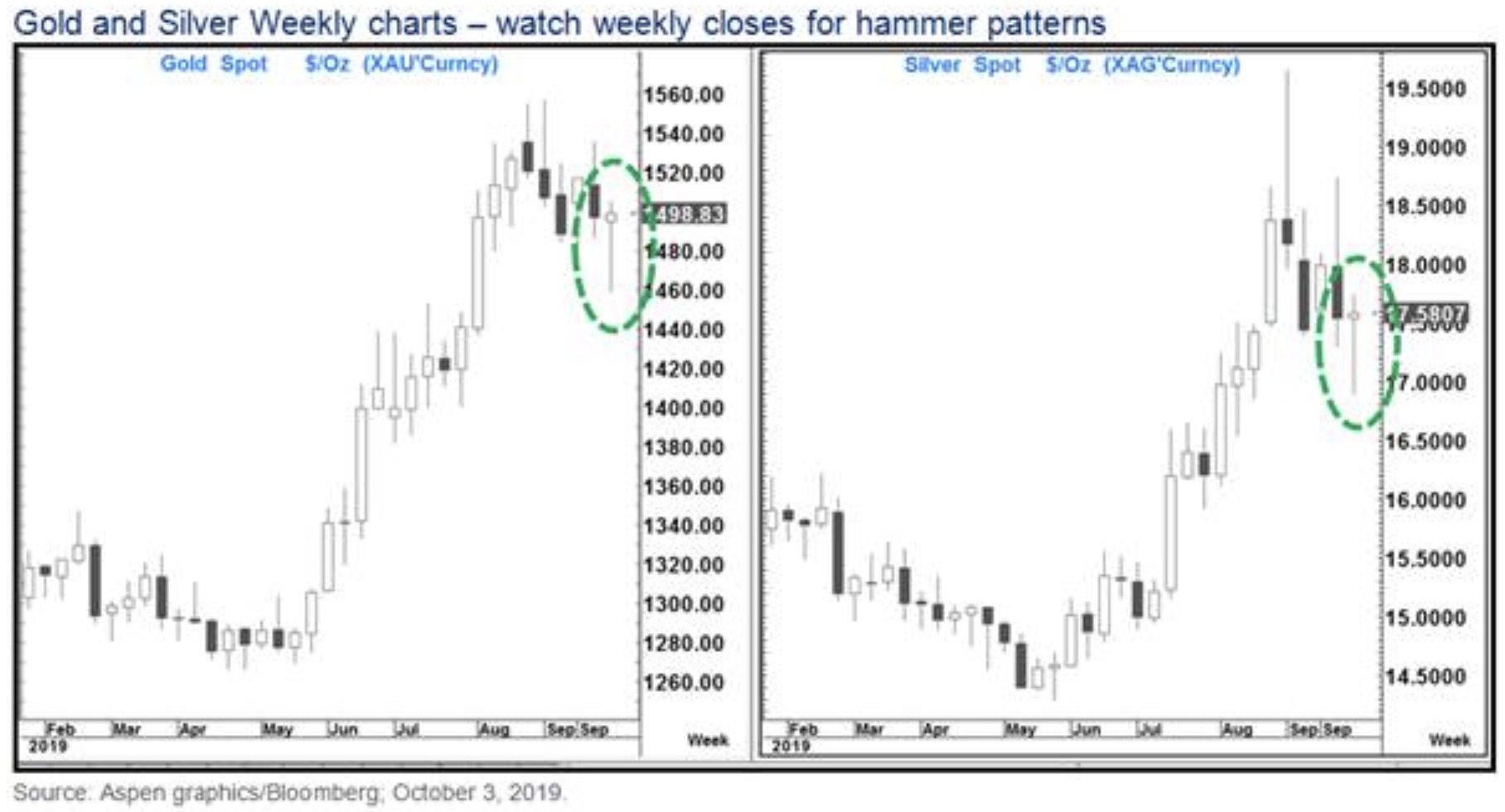 In a market of heightened volatility, the USD is not only weak against Gold but also falling against the JPY. Currently we are testing an important short term level on USD/JPY with USD/JPY 3 month implied volatility on the rise. (See below). 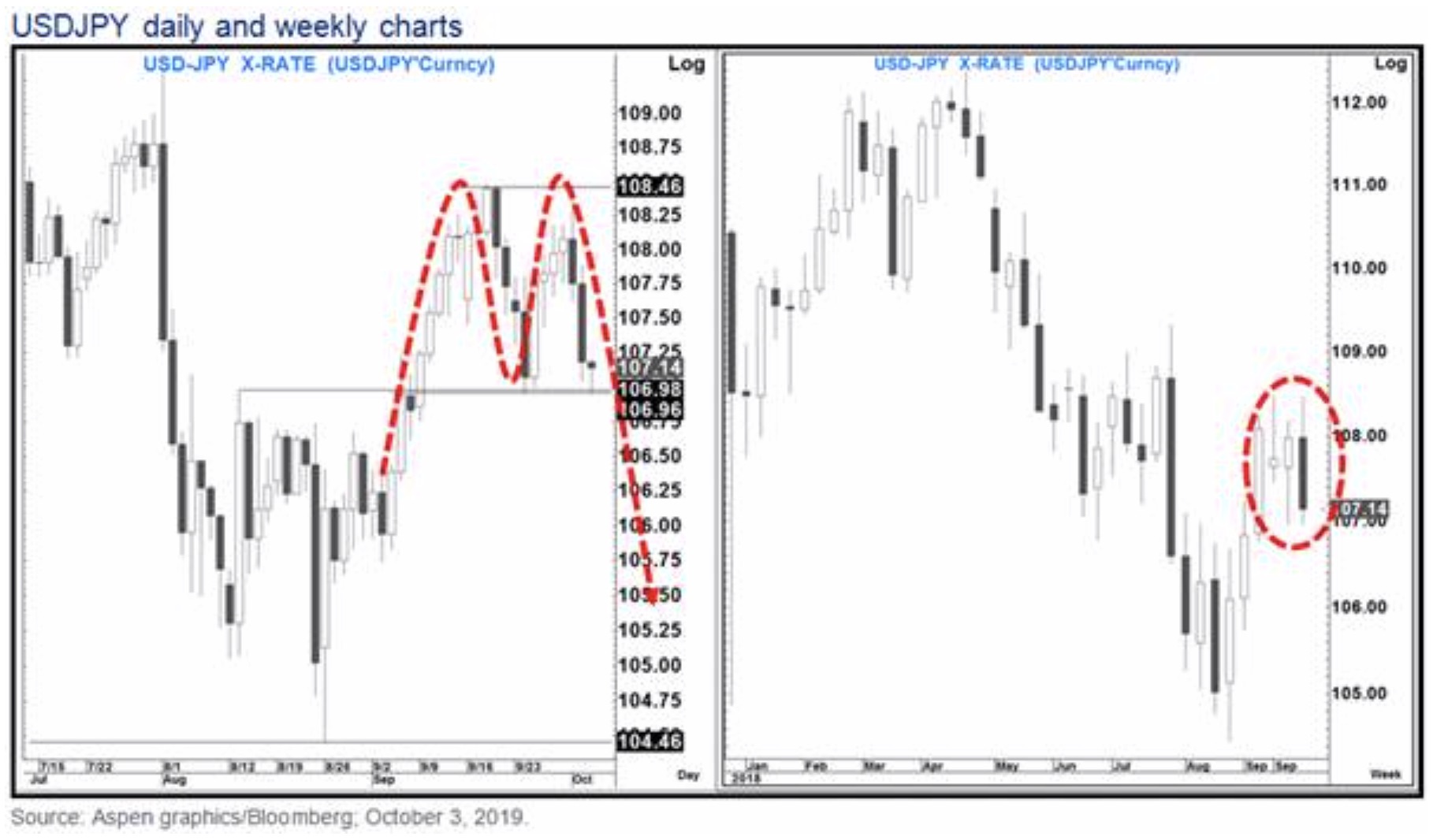 A close this Friday below that level would result in a bearish outside week.

The likelihood of further losses is supported ty the price action on USD/JPY 3 month implied volatility. This setup indicates a move to and through, 8.52%. (See below). 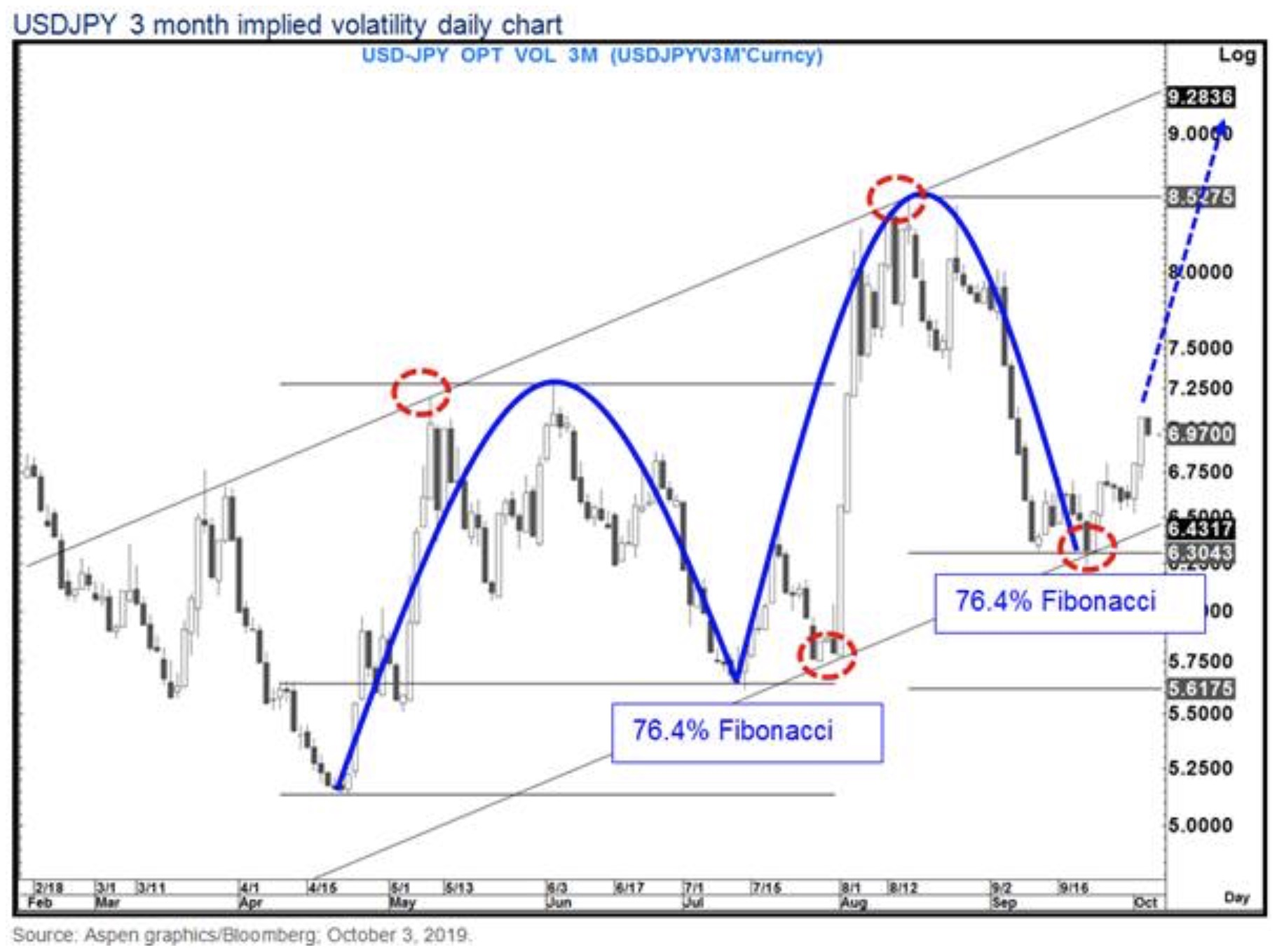 The long term chart shows the price action in still similar to that seen in the early 2000s.

As a reminder, August saw a bearish outside month on USD/JPY which was the first since May 2010 further supporting the downtrend. (See chart below). 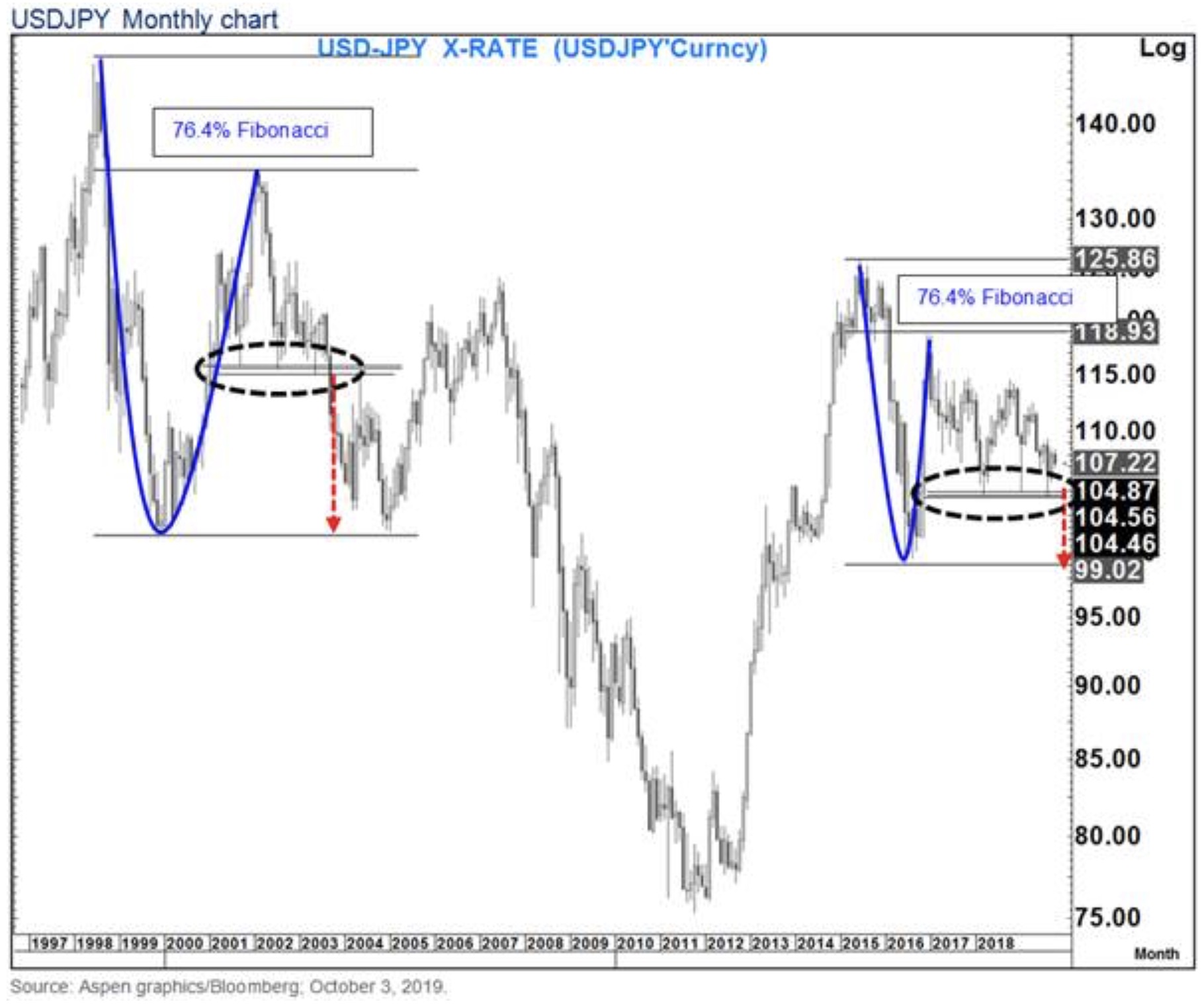 Gold against JPY shows a retest of the 157,744-157,489 yen breakout area and we have started to bounce back when the JPY itself is rallying against the USD. (See chart below). 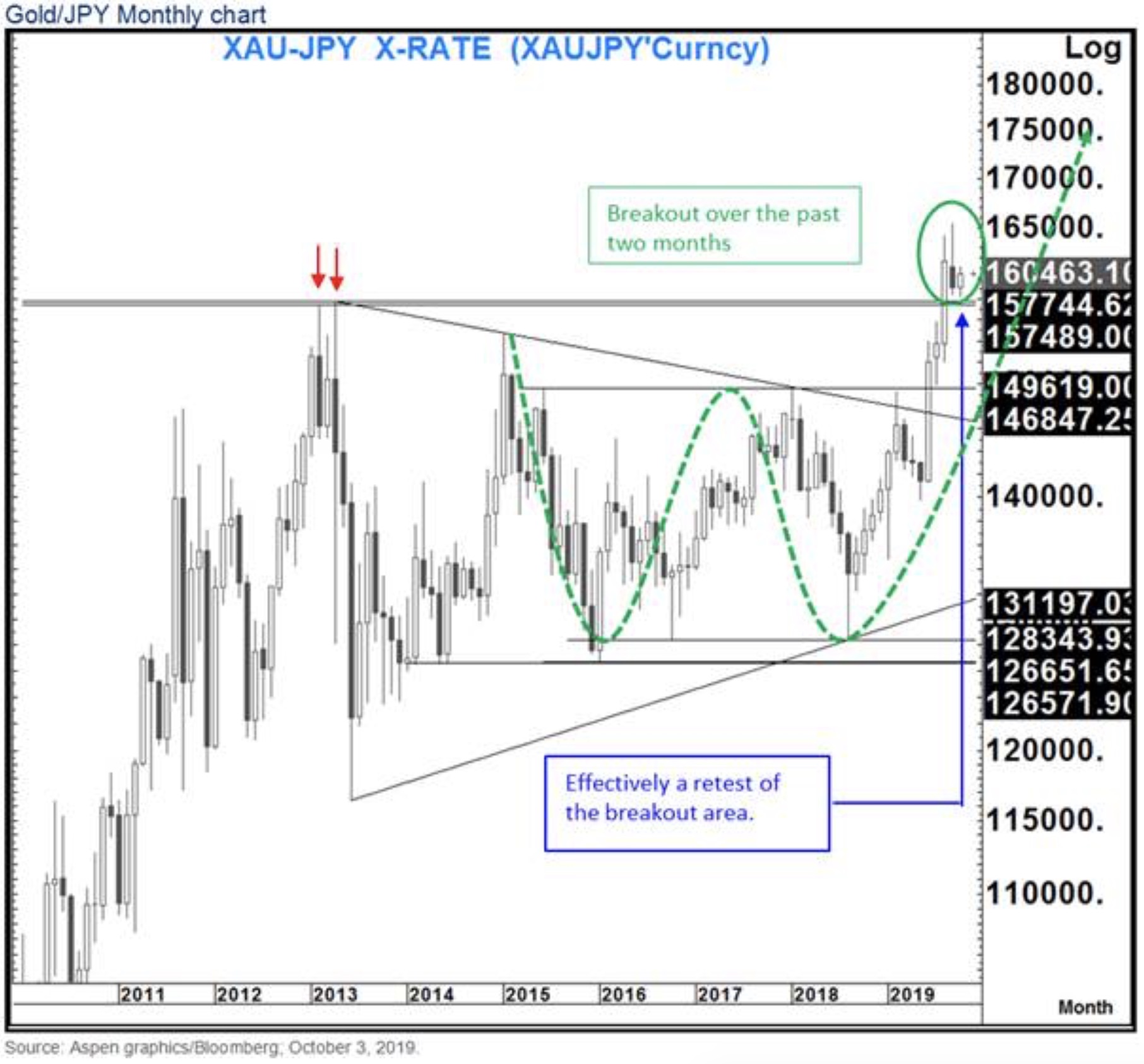 The long term chart below warns us of more however (gains) (see below). 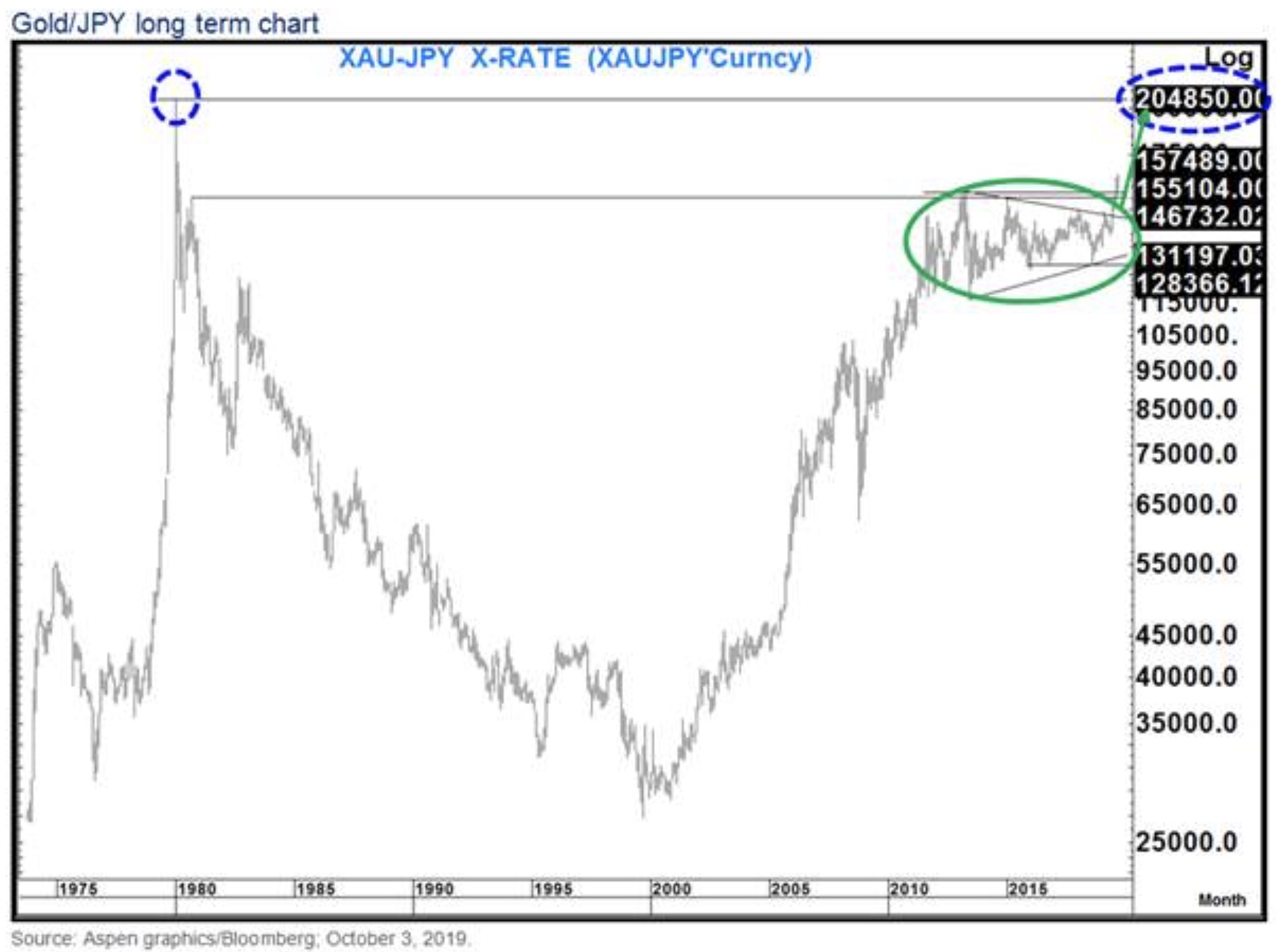 The only notable level on this multi decade chart is the all-time high from January 1980 at 204,850 yen which is more than 25% above current levels.

Spike In Gold Volatility Means Spiking Gold Prices
At this stage, like volatility elsewhere, volatility in Gold is set to rise (see below). 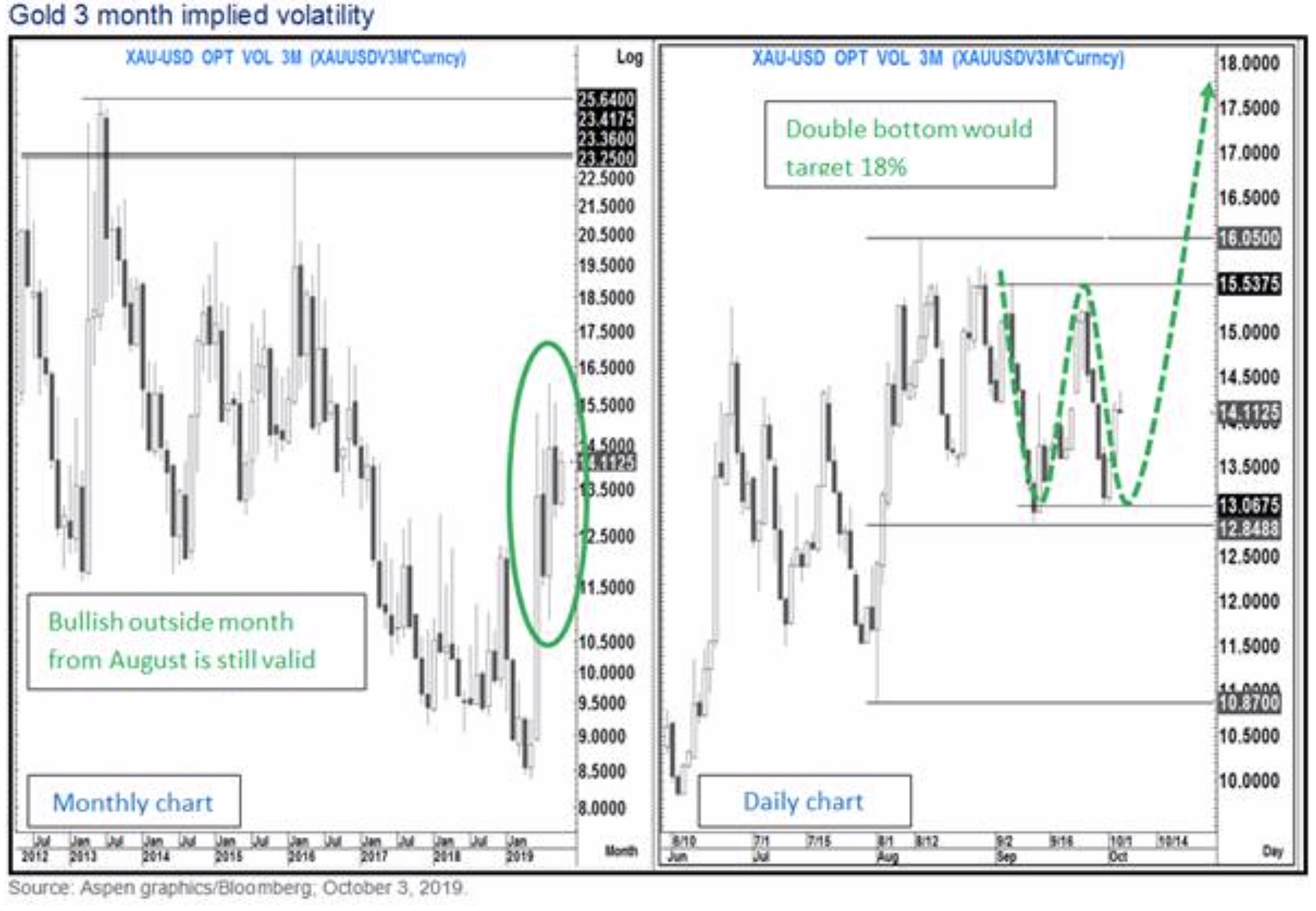 Looking at the monthly chart however it would not be surprising to see even higher levels given the strong bullish outside month in August. Resistance levels over the medium term are seen in the 23%-25% area.

Look At What Just Hit The Lowest Levels Since 2009! CLICK HERE TO READ

GOLD BULL ALERT: What To Expect Next For Gold After Yesterday’s Plunge Ended One Of Gold’s Longest Streaks In 4 Decades CLICK HERE TO READ

RELEASED! Gerald Celente tells KWN listeners around the globe exactly where he believes the decline in gold will end before it skyrockets through $2,000 and much more and you can listen to his powerful audio interview by CLICKING HERE OR ON THE IMAGE BELOW.