Crude Oil Skyrocket Above $150 Even As Economy Plunges

Crude oil may skyrocket above $150 even as the economy plunges.

Energy
June 22 (King World News) – Otavio Costa:  Energy stocks-to-US equities ratio yet to breakout from multi-year resistance. It’s the beginning of a trend, not the end of one. Buy the dip in commodities, sell the rally in overall equities.

Energy Stocks Preparing To Breakout vs US Equities 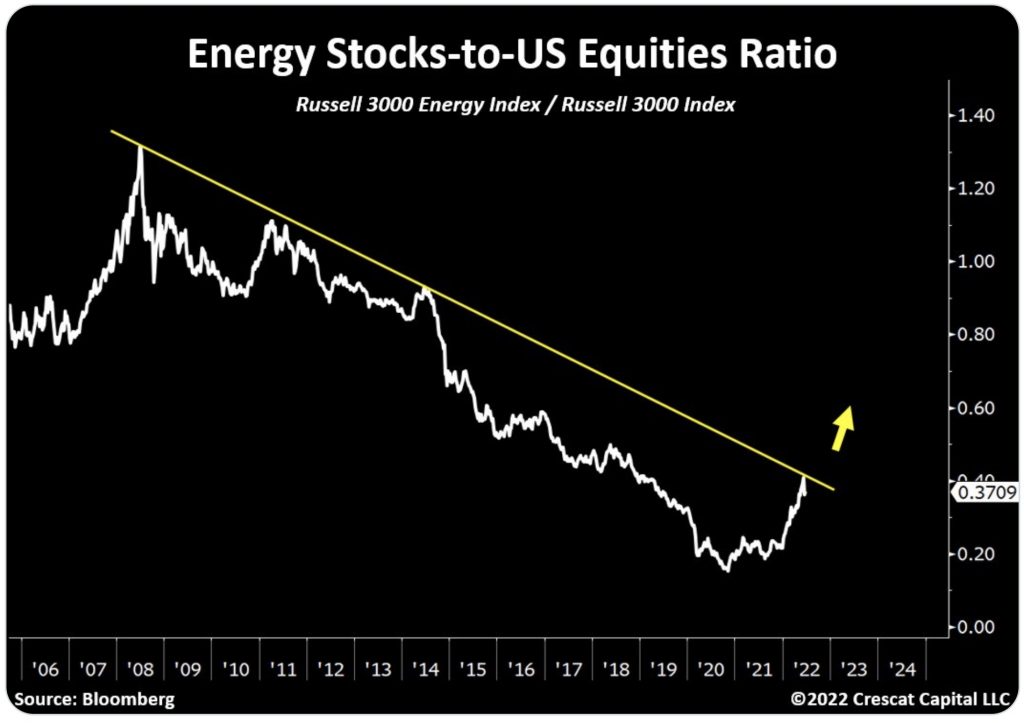 Economic Slowdown
Gerald Celente:  Consumer spending is softening, home starts and sales are down, industrial output is weakening with factory production in decline, and the U.S. Federal Reserve has just boosted its key interest rate the most in one jump since 1994.

The Federal Bank of Atlanta’s closely-watched GDPNow gauge of economic strength indicates the U.S. economy will flatline this quarter after shrinking 1.4 percent in the last one.

The world’s largest economy is slowing down and fears of a recession are mounting.

A recession is defined as two consecutive quarters of a shrinking economy and is usually formally declared by the private, nonprofit National Bureau of Economic Research.

The number of new applications for unemployment benefits fell by 3,000 in the most recent week to 229,000, barely above the pre-COVID norm of about 225,000, the labor department reported.

The jobless rate held at 3.6 percent in May for a third consecutive month, staying close to historic lows. Still, other indicators hint that the job market is slowing…

The number of open jobs in the U.S. has slipped, edging down from its March record of 11.9 million to 11.4 million in April, the labor department reported. The number of new jobs being posted at Indeed.com, the online employment brokerage, has flattened.

TREND FORECAST:
The more people that quit work, the deeper consumer spending, which accounts for more than two thirds of the U.S. economy, will fall.

The quits rate, which peaked above 4 percent earlier last year, which we reported in “The ‘Big Quit’ Sets Record in November” (11 Jan 2022) is barely easing and, as we have noted above, will stay high.

Indeed, confirming what we had forecast when The Great Resignation began, a Pew Research Center survey of workers who quit jobs in 2021 found that 63 percent cited low pay, 63 percent blamed a lack of advancement opportunities, while some 57 percent said they felt disrespected at work.

Moreover, with the geopolitical wild cards such as the Ukraine War and Israel ramping up its military actions against Syria, Palestine and threats against Iran… should military confrontation break out in the Middle East, Brent Crude will skyrocket above $150 a barrel, which in turn will crash equity markets economies.

Therefore, considering the economic fundamentals and what are geopolitical wild cards that are now being played, we reaffirm our forecast for Dragflation: Declining GDPs and rising inflation