As we continue to kickoff the new year, today the man who has become legendary for his predictions on QE and historic moves in currencies, warned King World News that we are about to see something that has never been seen in world history.

January 26 (King World News) – Egon von Greyerz:  “2018 is starting right on cue. Inflationary pressures have been latent for quite some time but have recently shown the world what is to come in the next few years…

Egon von Greyerz continues:  “How could anyone believe the propaganda that there is no inflation? It has suited the market manipulators, but the fake wizardry of the central bankers is now about to be revealed. Since the early 1980s the interest rate cycle were in a strong down trend. When the financial crisis started in 2007, central banks panicked and rates were rapidly lowered around the globe.

US short term rates went from 5% in 2007 to zero in 2008 and stayed at that level until late 2015. In many countries rates were lowered to negative like in Japan, the Euro area, Switzerland, Sweden etc. Low or negative interest rates defy all economic principles and distort the equilibrium of a normal market economy. They discourage savings and without savings there can be no sound investments. Instead, investments have been made with printed or borrowed money. Due to the low cost of money, many high risk projects have been undertaken.

Low or negative interest rates also lead to irresponsible deficit spending by governments. This is why global debt has gone from $120 trillion in 2006 to $240 trillion today.

Explosion in money supply will lead to inflation explosion
Normally this explosion of money would have created very high inflation or hyperinflation. But since virtually none of the fabricated money went to the normal economy, published inflation has been non-existent. Anyone buying food or paying bills knows that official inflation is a fiction of governments’ imagination. And although the official figures show no inflation, there has been an explosion in asset prices. Stocks, bonds and property have all soared. US stock markets, for example, are up 4-times since 2009.

The assets bubbles do not benefit normal people. They take away valuable investment into the real economy to the benefit of the top 1-5%. This is a very dangerous trend that eventually will lead to social unrest or revolution.

But we have now reached a stage when the explosion in money supply will have a major influence on the real economy. The inevitable consequences of the totally irresponsible mismanagement of the economy that I have been forecasting for quite some time are now starting to take effect.

If we start with inflation, official statistics are useless, as I mentioned above, since these figures are totally manipulated. A very good indicator of inflation is commodities. Below is a chart of the GS commodity index versus the S&P since 1971. 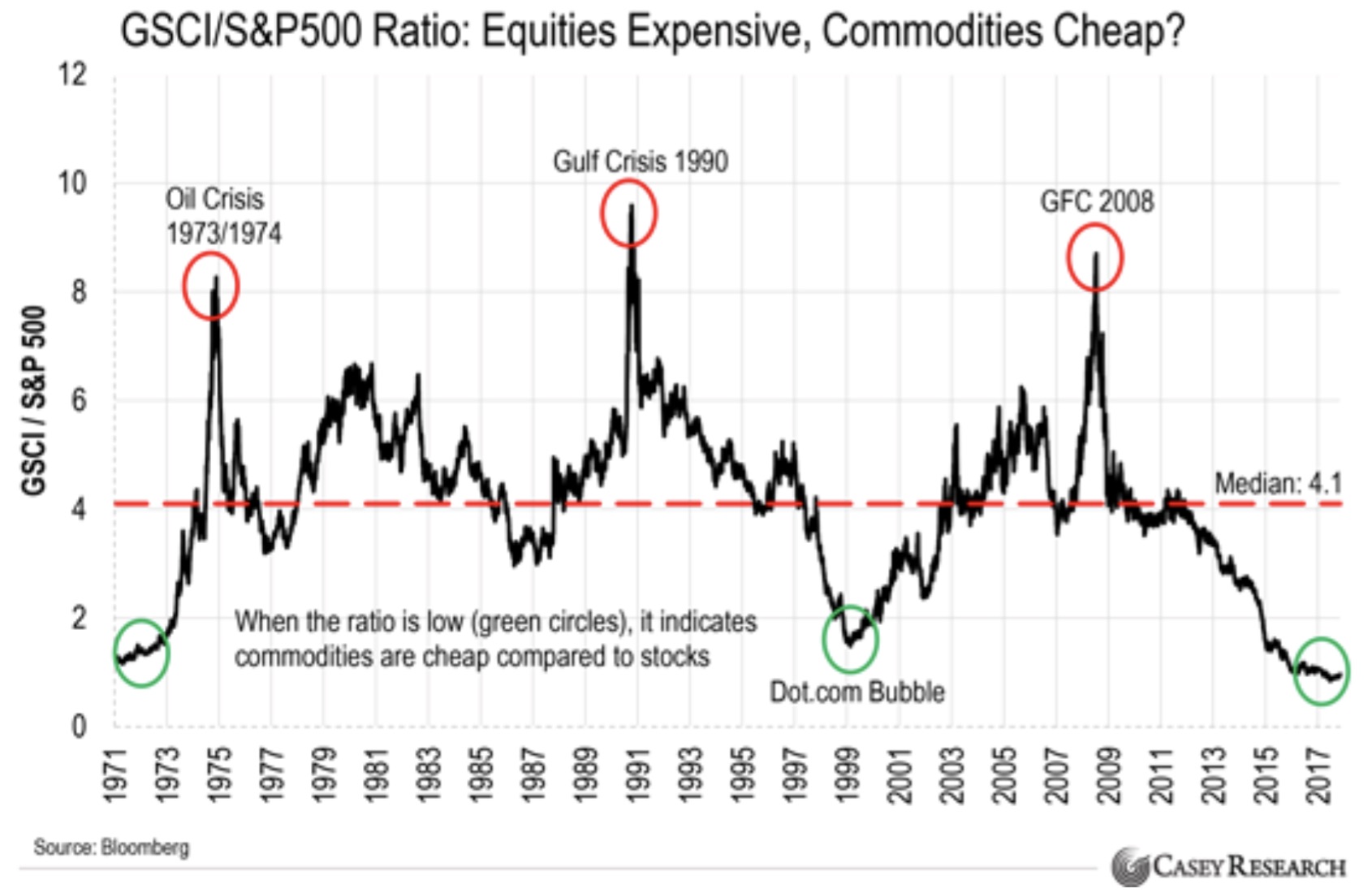 That ratio is at an all-time low, and below the 1971 and 1999 lows. This cycle is now turning and the ratio is likely to go well above the 1974, 1990 and 2008 highs. Thus the minimum target is 10 which is a 10-fold increase from here. This means that stocks will fall at least 90% against commodities. Since the precious metals will be the main beneficiaries of the commodity boom, stocks are likely to fall at least 95% agains gold and silver.

Looking at a short-term chart of commodities, the CRB index bottomed in February of 2016 and is up 30% since then. Since June of 2017, the CRB is up 20% and since mid December of 2017, it is up 8%. This is a clear indication that inflation is now going up fast. 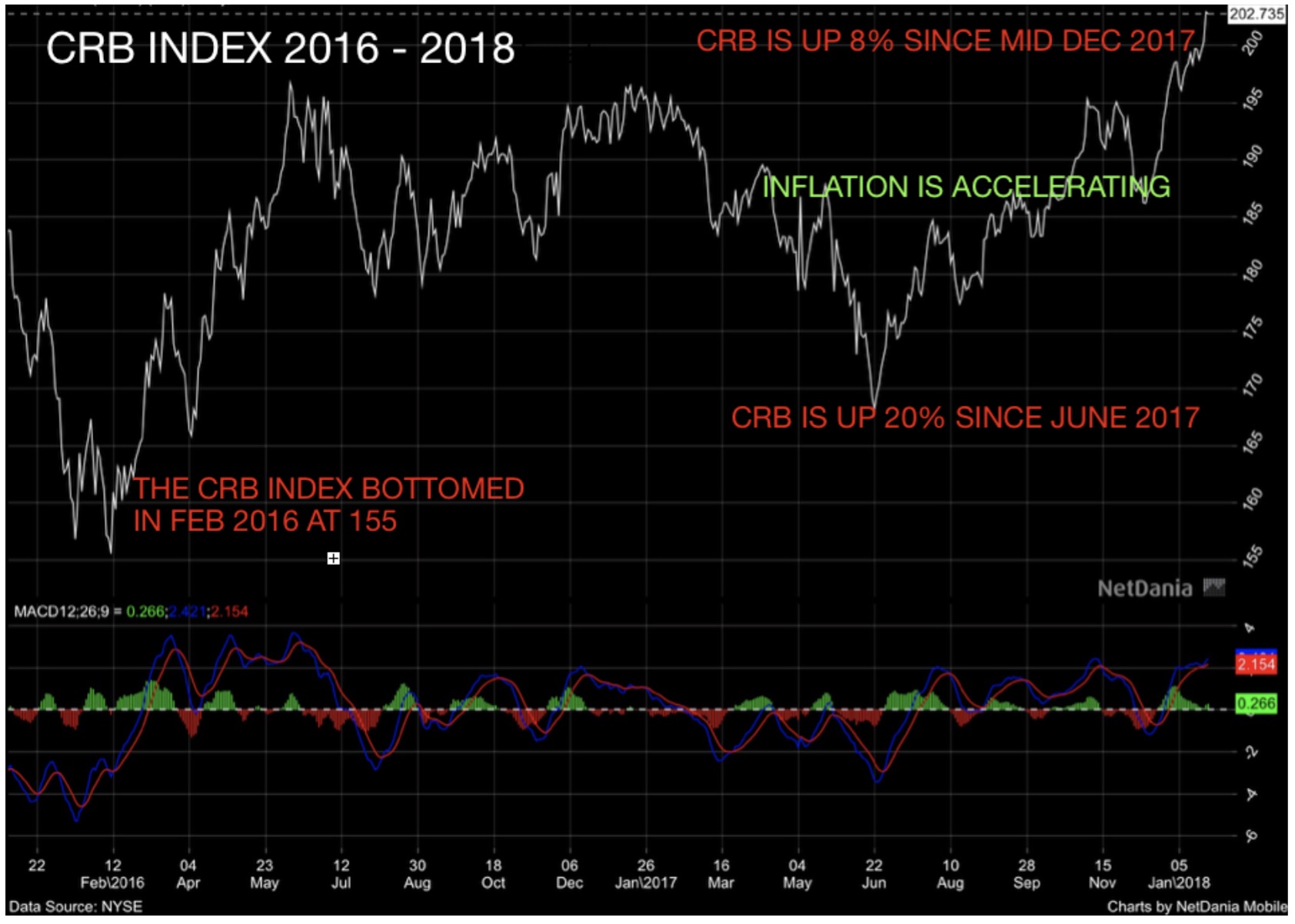 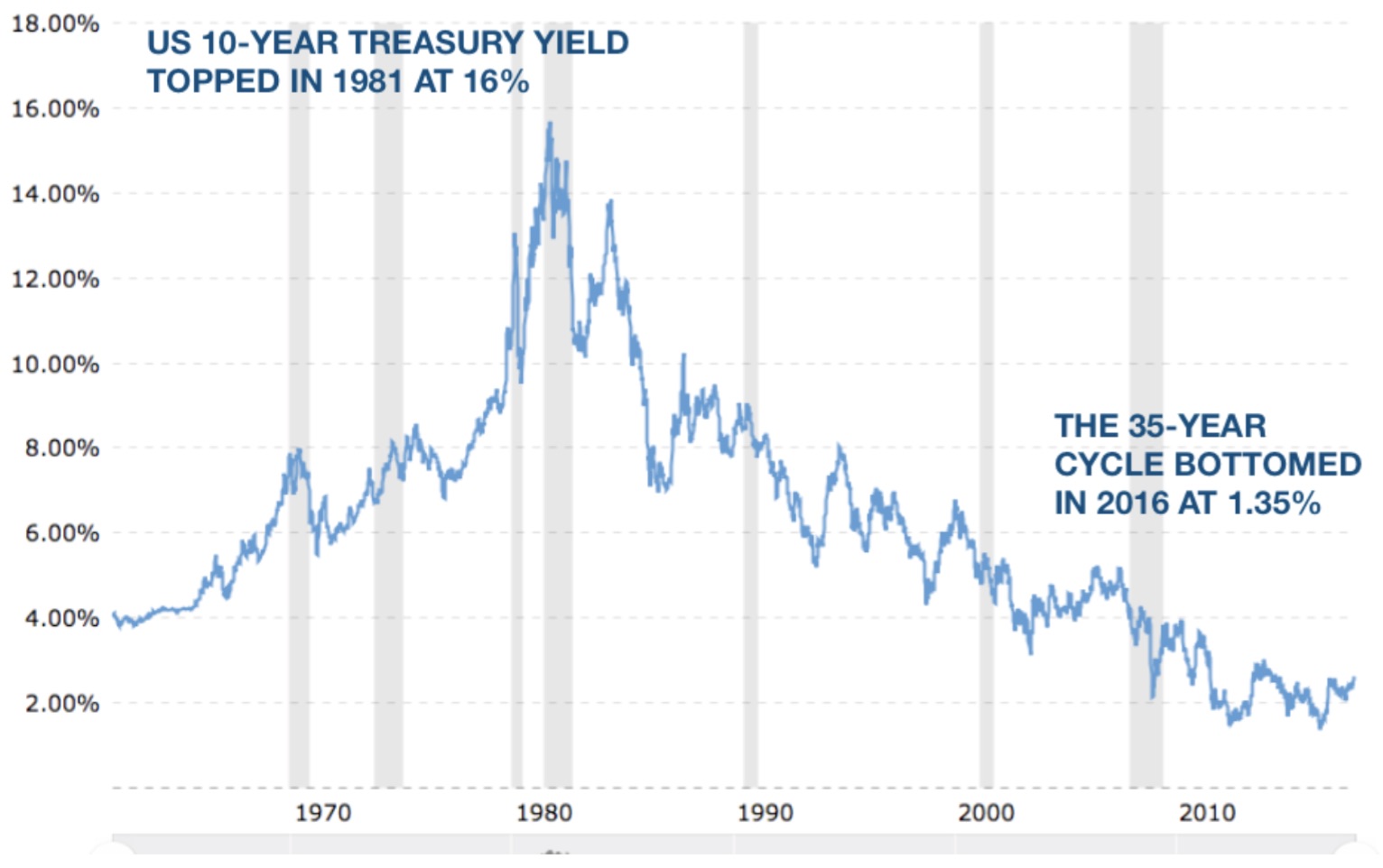 The 10-Year Treasury yield is now accelerating fast and has gone from 2% last summer to 2.65% today. Rates will now rise rapidly as inflation rises and in the next few years we are likely to see the 10-Year rate above the 1981 high of 16%. 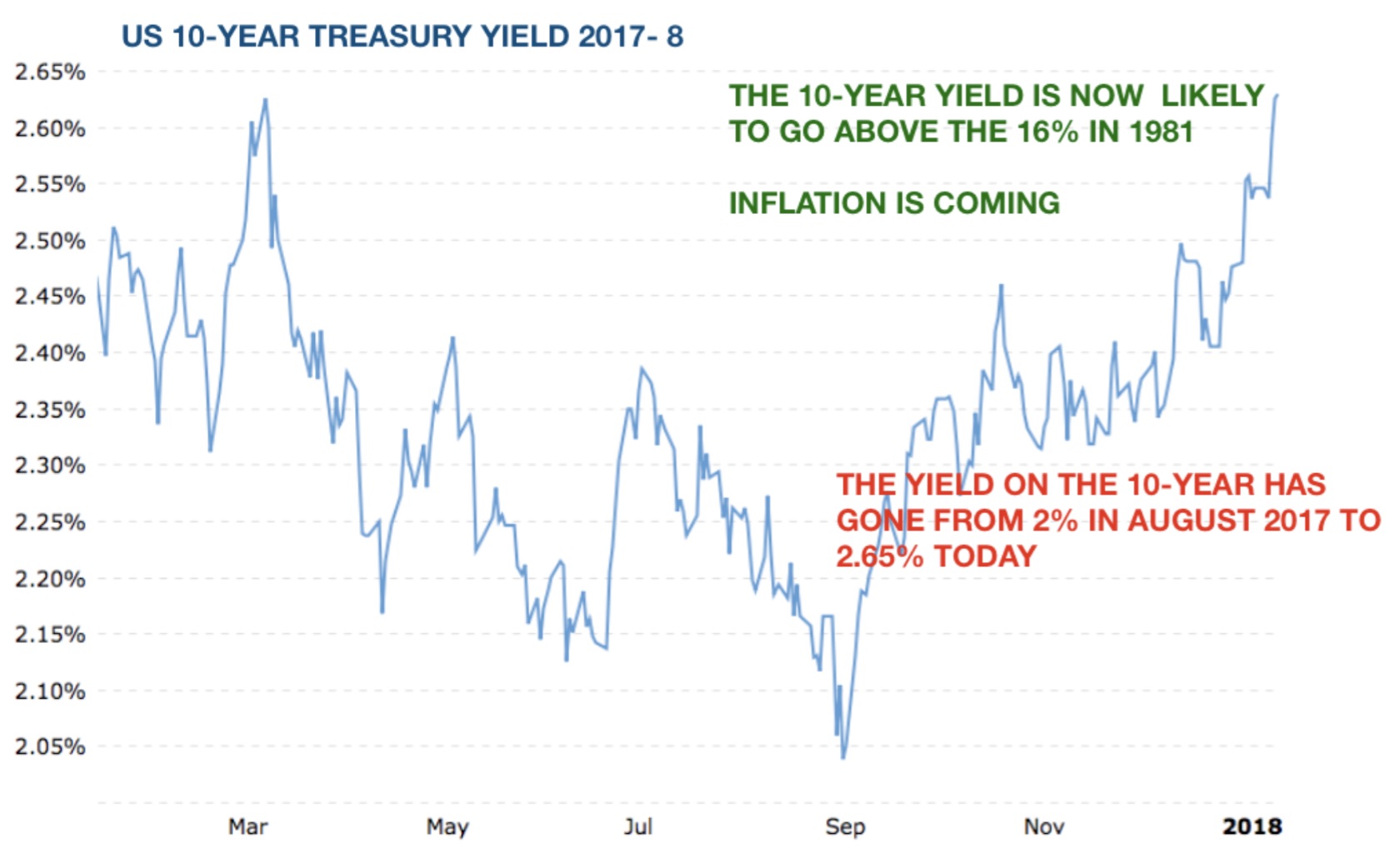 US DOLLAR TO FALL RAPIDLY
Another weak link in the world economy is the US dollar. Many so called experts have been forecasting a dollar rise in 2017 due to a very high demand for the greenback, especially in connection with the repatriation of dollars by US corporations. Very few have realised that the US is a bankrupt economy and the dollar is only backed by debt and more debt. The factors which, so far, have kept the dollar from collapsing are its reserve currency status, a strong military and the petrodollar. This has been reinforced by the US imposing a financial regulation on the world like FATCA, backed by fines of $100s of billions.

All of these factors are now deteriorating. The petrodollar will be replaced by the yuan and ruble, and the US military is weakening. As the dollar falls, the US hegemony will quickly go up in a puff. 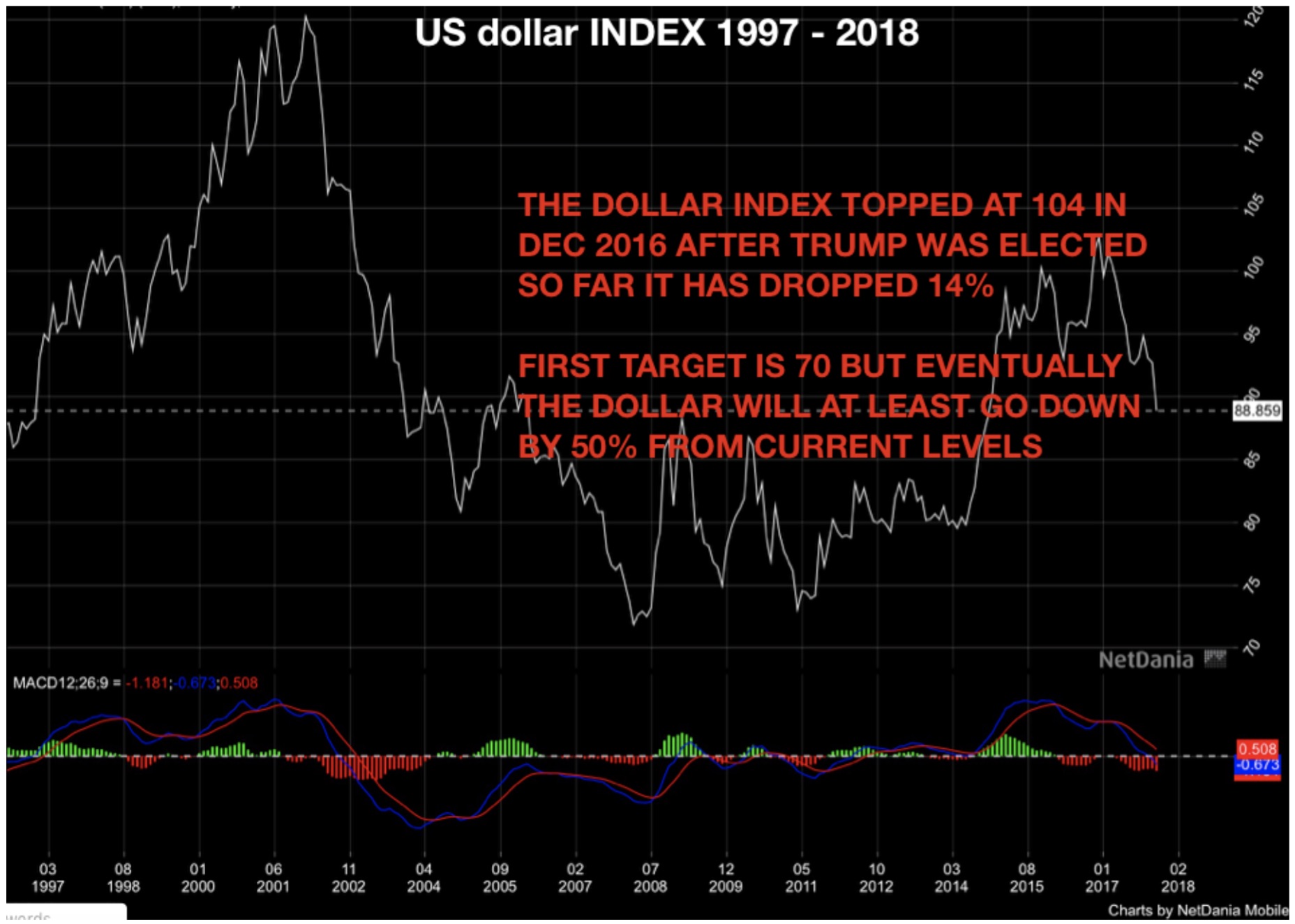 FOLLOW THE REAL MONEY
The truth can only be suppressed for so long. Since the financial crisis of 2006-2009, central banks have managed to dupe the world into believing that all is well on the Western Front. But the West is in a financial and moral decline that soon will be revealed. For anyone who wants to understand what is happening all they need to do is “TO FOLLOW THE REAL MONEY.” The chart below tells us where the money is going. It is no use following Western money since it is all based on debt or quicksand.

Instead we must follow the flows of real money and these flows have been relentless for the last 20 years. As the East has increased its gold holdings from virtually nothing in the late 1990s to 35,000 tonnes today, the West has been emptying its vaults. Western central banks refuse to publish official physical audits of their gold. In total, Western banks should hold 23,000 tonnes of gold, with the US supposedly holding 8,000 tonnes of that. With the massive flow of gold to the East, it would be surprising if Western Banks even hold 11,500 tonnes, which would be 50% of the official holdings. 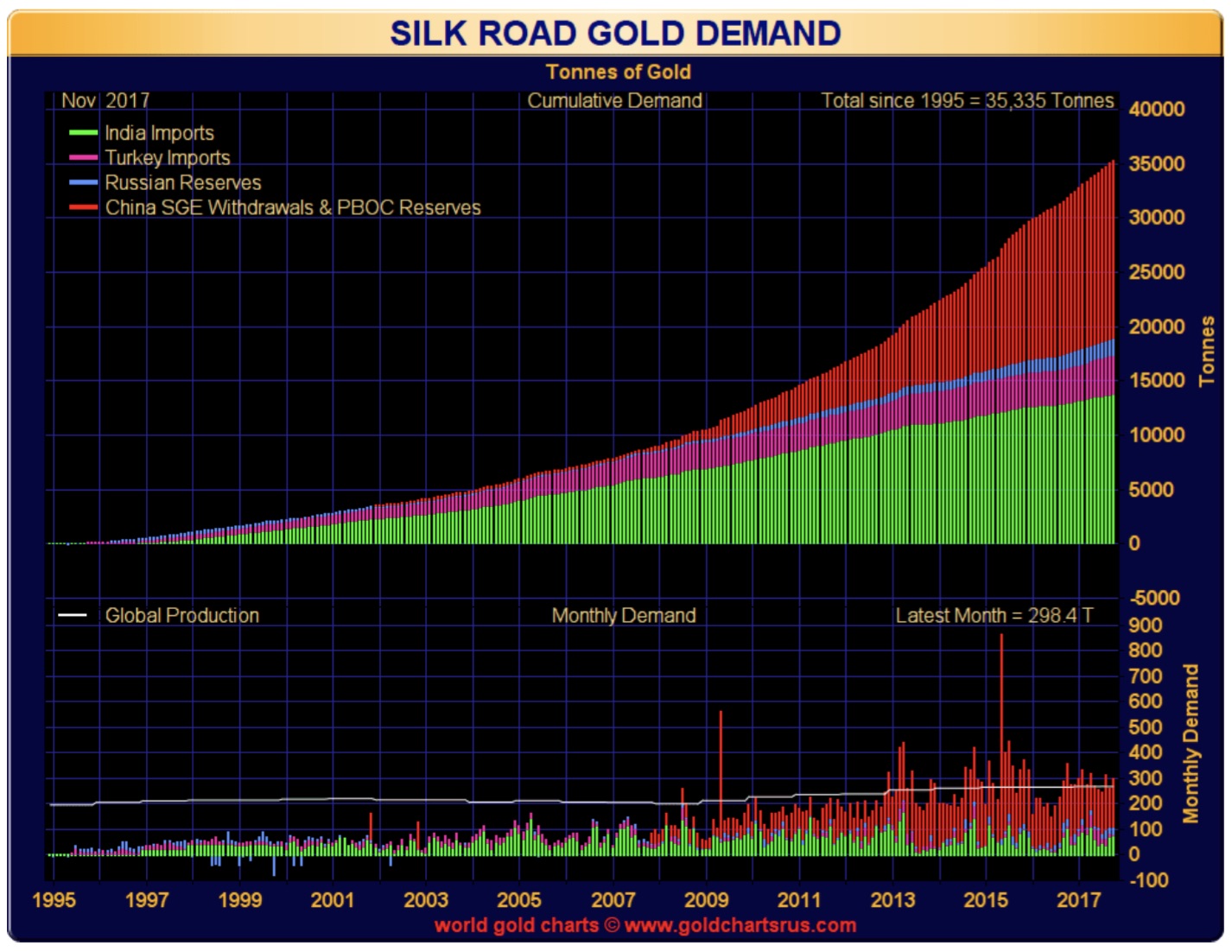 We’re About To Witness Something That Has Never Been Seen In History
The global economy is on the verge of collapse. The course of events is straight forward. First inflation, rapidly rising interest rates and a falling dollar. Initially the stock market melt-up might continue for a number of months. But sooner or later, massively overvalued stocks will collapse and so will the world economy. Governments will use the only tool they have, which is money printing on a scale that has never happened before. This will lead to hyperinflation and thereafter an implosion of the financial system.

Physical gold and silver will be the best form of wealth preservation and act as insurance against the coming debacle, but it must be held outside a fragile banking system and outside the jurisdiction of the investor. Eventually gold and silver will reach heights which are unimaginable today.

***ALSO JUST RELEASED:  Yesterday KWN Warned US Dollar Rally Was Coming…Here’s What To Expect Next For Gold, Silver And The Dollar CLICK HERE.