Today the man who first predicted Greek bank deposits would be stolen just issued a warning about the crisis in Greece that is threatening the global financial system.  He also warns that time is has just about run out to solve the crisis.

James Turk:  "Everybody is playing hardball in Greece, Eric. The standoff between the Greek government and its creditors has reached crisis levels. All we can do now is wait to see who will blink first. The Greek government has acknowledged that it has nearly run out of money…. 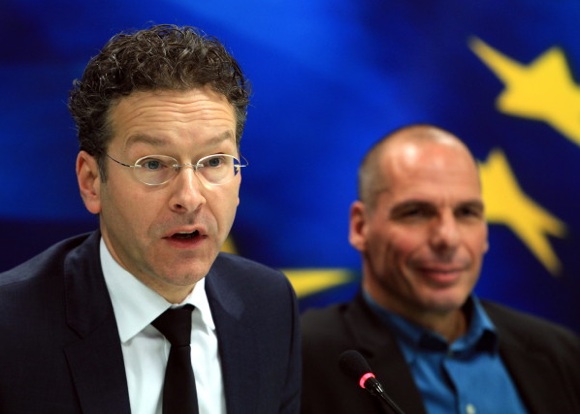 The Troika Is The Problem

On the other side of the stand-off is the so-called “troika” of the EU, ECB and IMF, which refuses to give ground. They are requiring Greece to stick with the terms negotiated by previous Greek governments and repay its debts on schedule. But the only way those debts can be repaid is if the troika loans the next €7.5 billion tranche under its rescue program.

All the troika is doing is piling more debt upon the debt mountain that has already forced Greece to its knees. By giving Greece more loans to repay previous debts, the troika hopes that it can make Greece appear solvent, when it is not. The bottom line is that Greece does not have the financial capacity to repay its debts.

The ECB has not yet taken the nuclear option by forcing a bail-in of depositor money in Greek banks to repay the ECB’s loans to Greece, but that moment remains close. It is the only way that the ECB will get its money back.

Importantly, ECB president Mario Draghi has confirmed that the ECB’s exposure to Greece is €110 billion, which is one side of the all-important equation that will determine when the Greek banks get nationalized. The other side of the equation is the current level of deposits in Greek banks.

There have not been any recent reports as to what remains on deposit in the Greek banking system. The best guess seems to be that total deposits are about €130 billion, but deposits continue to shrink. So even though the ECB is not making more loans, these two totals are still converging. They will not be allowed to cross. The ECB will take depositor money before these two lines cross to repay its loans to Greece.

Greece Is The Biggest Risk To The Global Economy

It is clear that Greece is teetering on the brink of default. Its bonds have been downgraded again and are now deep into junk status territory. And despite the EU saying Greek banks are solvent, every indication is that much of the Greek banking system is largely insolvent and beyond hope as the crumbling Greek economy puts more bank loans in jeopardy.

A few weeks ago the British Chancellor, George Osborne, told Yanis Varoufakis, the Greek Finance Minister, that Greece is becoming the biggest risk to the global economy. And the risk now is even worse as Greece runs out of money and prepares for a default on its €325 billion of debt, which looks not only inevitable, but imminent." ***ALSO JUST RELEASED: Here Are The Big Surprises In Chaotic Global Markets CLICK HERE.