With continued uncertainty in global markets, today a 50-year market veteran told King World News that Western propaganda is accelerating, even as China is moving toward supreme global dominance.  He also discussed what this will mean for key markets, including gold and silver.

John Embry:  “Both gold and silver remained locked down in the paper markets in the short-term.  However, the good news is that both are building larger and larger bases, which will lead to massive upside moves in the near-future….

“The reason it’s difficult to time the move is because the Western central banks and their cronies are increasingly desperate as economic, financial and geopolitical conditions continue to deteriorate.  So they will pull out all the stops to extend the fantasy as long as possible.  They will do this because the alternative is going to be beyond ugly.  So that’s why the timing of this is problematic.

Meanwhile, I am fascinated by the the propaganda coming out of the Fed.  One will come out and say that another round of QE may be necessary, then another one will say that the Fed action on rates will be data-dependent.  Then another Fed governor will state that a rate hike is imminent.

I believe they are doing this because they have no concrete plan and are essentially using a form of moral suasion to keep the public content in the short-term.  So they conduct their policy of ‘extend and pretend,’ hoping for a miracle even though it isn’t in the cards.  This has created an extremely frustrating period for rational investors but the Fed will continue this for as long as they can, similar to the 1999 – 2000 time period, before the stock market crash. 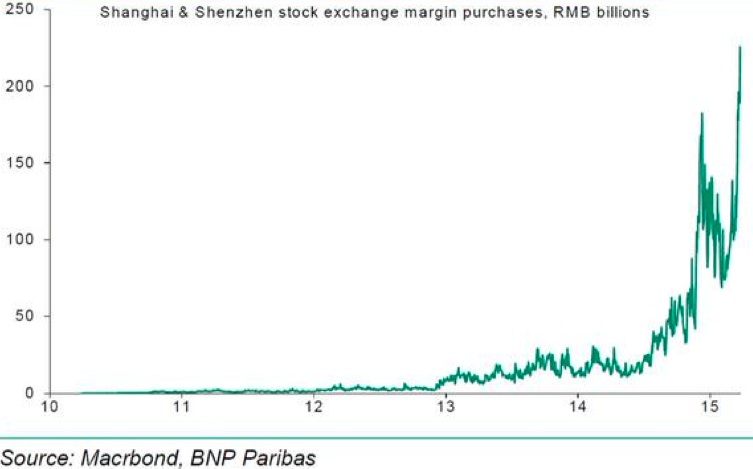 On a separate note, there was some interesting Chinese data this morning showing much lower exports than anticipated.  This is putting even more pressure on the Chinese economy, which is already plagued by severe overcapacity and is clearly weakening.  However, the money continues to flow from the central bank and it’s fueling an epic stock market bubble in China.

China’s tech sector is out of control and is challenging valuation levels seen in tech stocks in the U.S. at their peak in 2000, and we know that ended.  At the same time, the public is opening stock accounts with brokers at a record pace.  One has no idea how long this can go on but when it ends, it isn’t going to be pretty.

However, I must acknowledge that China is a huge creditor nation that also owns a massive quantity of gold it has acquired over the past decade.  This will keep China ascending in terms of power, regardless of the challenges they face.  It will also put them in a position of supreme power in the ultimate economic and financial rebuilding process, which is going to be required worldwide in the not-too-distant future after a major collapse.

I honestly don’t think that investors around the globe can be too careful these days as they confront massively overvalued bond markets, stock bubbles everywhere, and vastly inflated real estate, which is supported by huge amounts of debt.

So unleveraged real assets are the place to be and gold and silver top the list because they are so remarkably undervalued because of the ongoing Western central bank price suppression scheme.  As their suppression scheme collapses, we will see one of the greatest upside moves in the history of the gold and silver markets.” ***ALSO JUST RELEASED: What People Absolutely Must Know About The Coming Global Financial Collapse CLICK HERE.