Today the man who has become legendary for his predictions on QE and historic moves in currencies and metals told King World News that gold has now broken out and a price of $3,000 is next.

“O Zeus, why is it you have given men clear ways of testing whether gold is counterfeit but, when it comes to fiat money, it carries no stamp of nature for distinguishing bad from good.” ― Euripides & EvG

May 9 (King World News) – Egon von Greyerz at Matterhorn Asset Management (based in Switzerland):  The Greek playwright Euripides’ (450 BC) statement on gold (slightly amended by me), tells us why it has remained money for 5,000 years.

Because gold is constant wealth and can’t be altered or forged successfully.

With regards to distinguishing bad from good fiat money, bankers and central bankers have made that task both ridiculously and criminally easy for us all.

Because there is no good fiat money…

All fiat money is fake and produced at will with the press of a button by the culpable bankers.

Fiat money is today produced electronically which means at no cost. So it is obviously today not even worth the piece of paper it is written on.

Anything that can be produced in unlimited quantities at no cost can, by definition, not be worth more than ZERO.

“WE CANNOT IGNORE THE CONSEQUENCES OF IGNORING REALITY.”
Ayn Rand said that “we can ignore reality but not the consequences of reality.”

And reality is that just in this century, over $200 trillion of debt or fake money has been produced in the world. That is 200% more than all the debt monies created ($100T) in history until year 2000. This sum obviously excludes promises and lies in the form of global unfunded liabilities, (medicare, social security, pensions, etc) plus up to $2 quadrillion of derivatives which will end up worthless.

But few realise the consequences of the world’s insatiable need for fake money. The super bubble will inflate until one day it totally implodes.

GOLD & CENTRAL BANKS
Central bankers have a love – hate relationship with gold. On the one hand they are obliged to love it since they hold 34,000 tonnes or $2 trillion worth of the yellow metal. Well, at least that’s what they say they own. But since virtually no central bank has an official audit of their physical position plus all outstanding paper contracts, nobody really knows how much of these 34,000 tonnes is actually held by them free and clear. 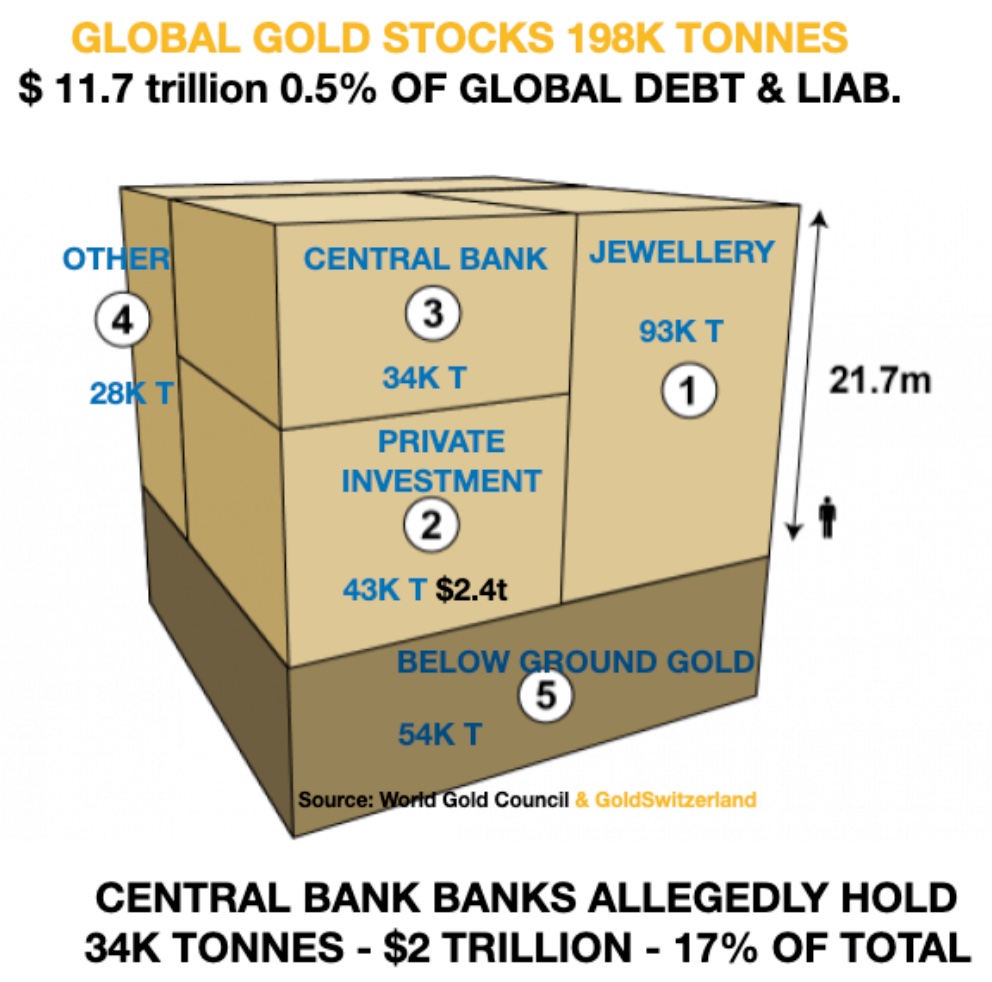 If central banks have nothing to hide, why don’t they open up their books for public scrutiny. After all this gold belongs to the people. The answer is simple. They clearly don’t hold the gold they state they have.

Much of this gold has probably been sold covertly. Also, major amounts have been leased to the market via the bullion banks. Much of the leased gold has then been bought by major international buyers like China and India. These countries will clearly never return the gold.

Again, we can’t ignore the consequences of the vanishing gold because all the central banks have for their leased gold is an IOU from a bullion bank. And the bullion bank obviously knows that they will never get the gold back from China, India or wherever it has been sold to.

Between the bullion banks and the BIS, they are juggling gold paper positions of $280 billion per day which is 600X daily mine production. The only reason they trade at this colossal level must be that they in the paper market must cover major deficiencies in the physical market. When one day a major number of paper gold holders panic and ask for delivery, the bullion banks will no longer manage to fool the market and will be caught with their pants down.

The former Governor of the Bank of England, Eddie George, described such a moment back in 1999:

At the time, gold had moved up from a low of $251 to $340. As George said, a further move up in gold would have taken down the whole caboodle. The total paper position in gold today is multiples of what it was in 1999 and very little needs to go wrong for the whole thing to blow up. To roll over around $280 billion in paper gold daily can easily go wrong at any time.

This situation is untenable and very likely to put enormous pressure on the whole paper gold market in due course. This market is a pest that is as far from the true gold market as you can get. It deserves to go under. And like all fake systems that break the laws of nature, its life is ephemeral.

“The desire of gold is not for gold.
It is for the means of freedom and benefit.”

Fake and totally encumbered paper gold is neither freedom and nor does it have any sustainable benefit. Especially since like most financial paper assets it is not backed by anything.

The coming rise in the gold price combined with very strong demand could easily be the catalyst for breaking the paper market.

LAST RESISTANCE FOR GOLD BROKEN – $3,000 NEXT
As I mentioned in a Tweet last week, gold has now finished the correction since August 2020 and is on its way to around $3,000 as an initial target. 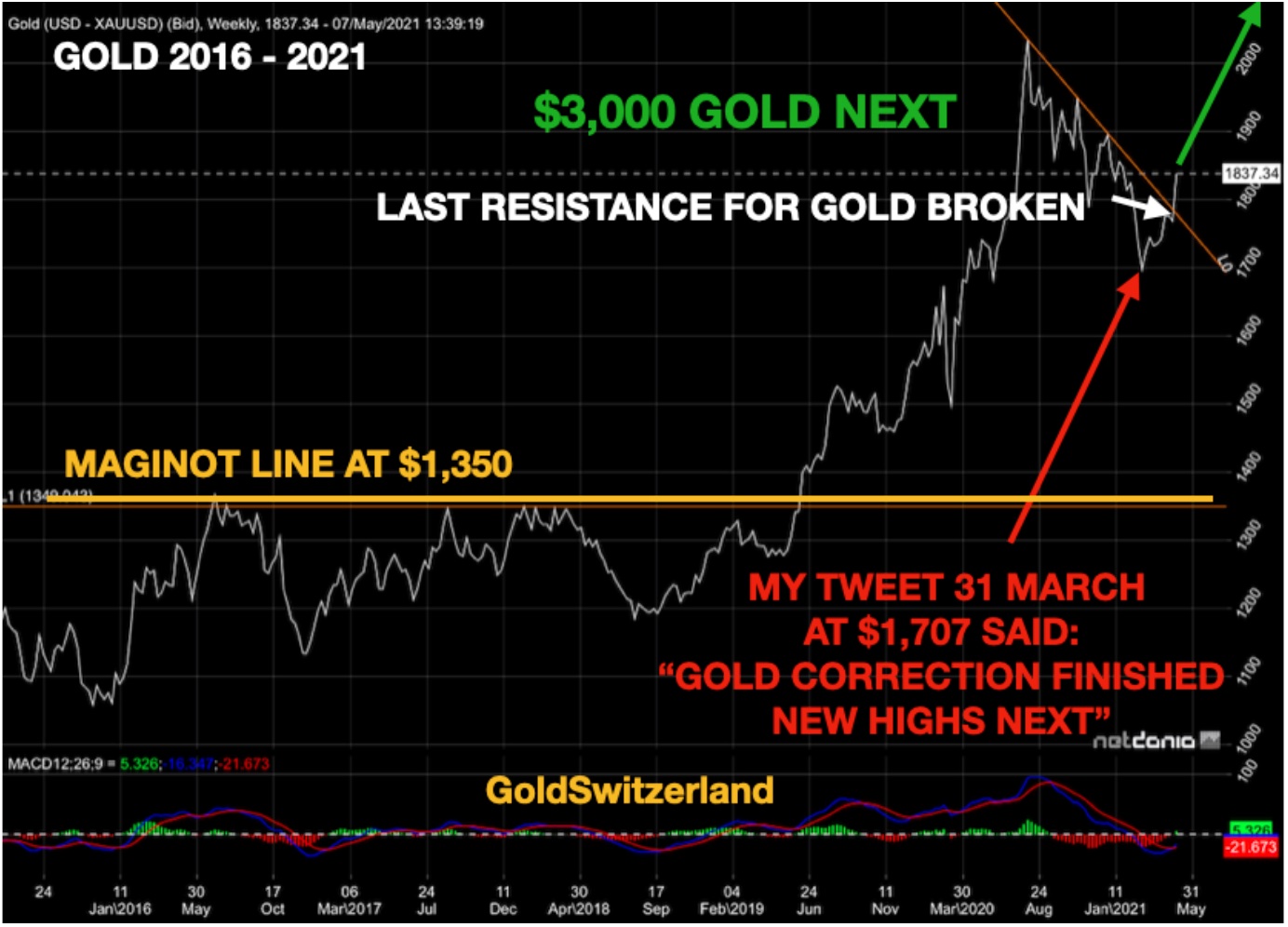 The important initial confirmation of gold’s continued secular bull market was confirmed when the 6 year Maginot Line was broken at $1,350 in June 2019, as I predicted in my Feb 2019 article “The Chinese and Maginot Gold Lines.”

Most investors don’t understand gold or the role of gold. This is why only 0.5% of world financial assets are invested in gold.

Very few investors are aware that gold has outperformed virtually all asset classes, including stocks, in this century.

But gold should not be seen as an investment but as an asset for “freedom and benefit.”

Gold is also the ultimate insurance and wealth preservation asset against a very fragile financial system.

Anyone who fails to protect his family’s and future generations’ wealth is not only irresponsible, but stands to lose virtually everything as the most epic asset bubble in history bursts…This will link you directly to more fantastic articles from Egon von Greyerz CLICK HERE.

***To hear a legend who overseas $160 billion Rob Arnott discuss how investors can protect themselves from skyrocketing inflation and much more CLICK HERE OR ON THE IMAGE BELOW.

Later today KWN will be releasing another audio interview!