As we continue to kickoff trading in the month of May, bears and bulls are both running at full speed.

High Speed: Bear and Bull Both Running at Full Speed
May 4 (King World News) – Liz Ann Sonders, Chief Investment Strategist at Charles Schwab:  The speed with which the U.S. stock market went from all-time highs to deep bear market territory broke all historical records. Then the rally that ensued was one of the fastest “new bull markets” ever in history; allowing the month of April to be the strongest since early-1987. Given the weaker start to the current month, expect to hear louder chants of “sell in May and go away.”

The warp speed nature of the past few months is unprecedented in many ways—both in terms of the economy and the stock market. The speed of the stock market’s collapse was directly tied to the collapse now underway in the economy. But what of the speed with which stocks retraced more than 60% of the collapse? In a phrase (coined by my first boss, the late-great Marty Zweig), “don’t fight the Fed.”

The Federal Reserve’s balance sheet has ballooned to about $6.7 trillion (see first chart below); as part of an unprecedented (there’s that word again) set of actions to save the economy during the COVID-19 crisis. Adding the relief packages from Congress and the Treasury Department, the combination of monetary and fiscal stimulus has reached more than 26% of expected 2020 GDP (see second chart below). 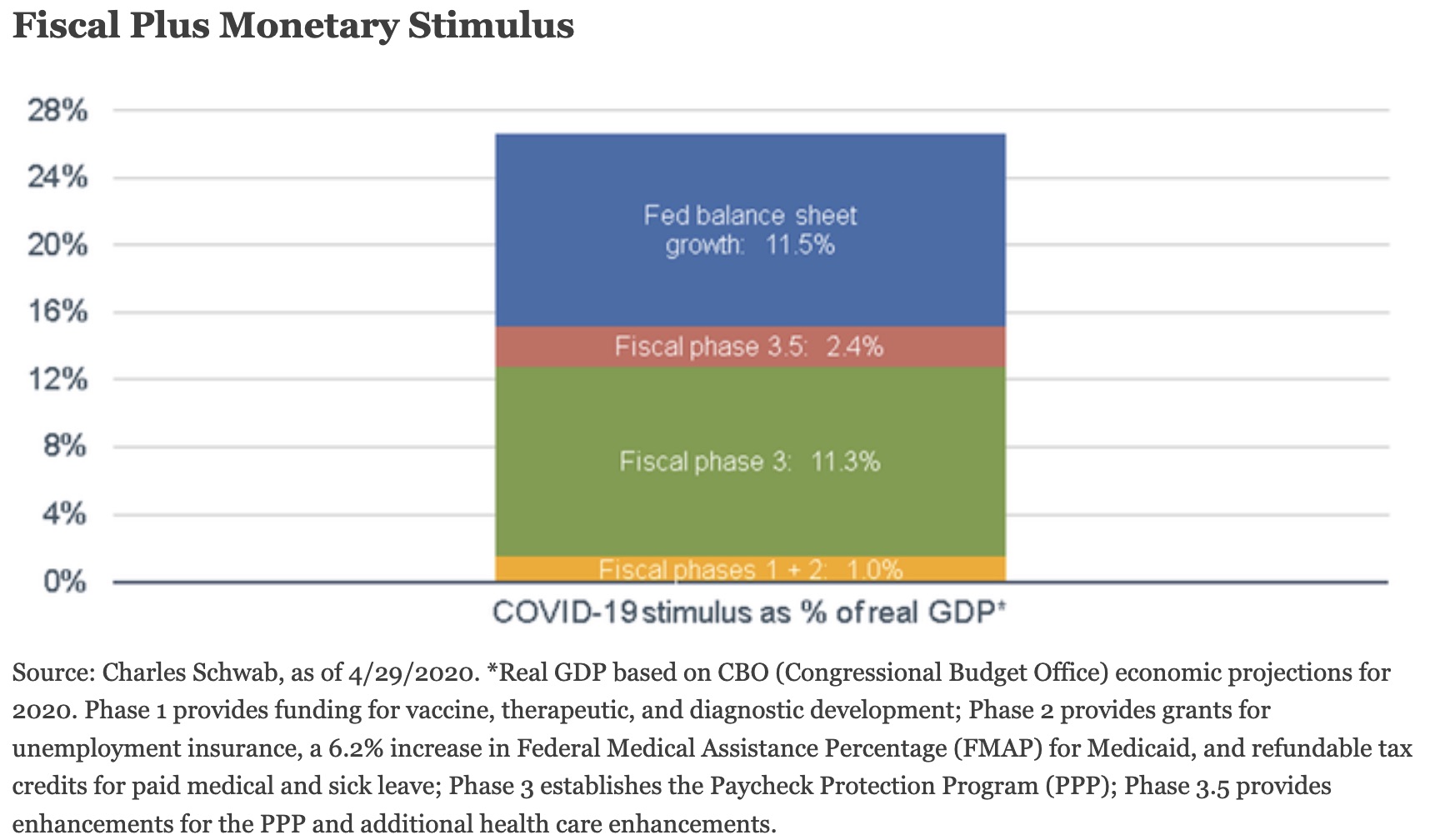 It appears the “Fed put” was alive and well in April—a period during which the spread between how stocks were performing and how the economy was performing hit a record. As you can see in the chart below, the z-scores (representing standard deviations from the mean) for the S&P 500 and Citi’s U.S. Economic Surprise Index have moved dramatically in opposite directions. 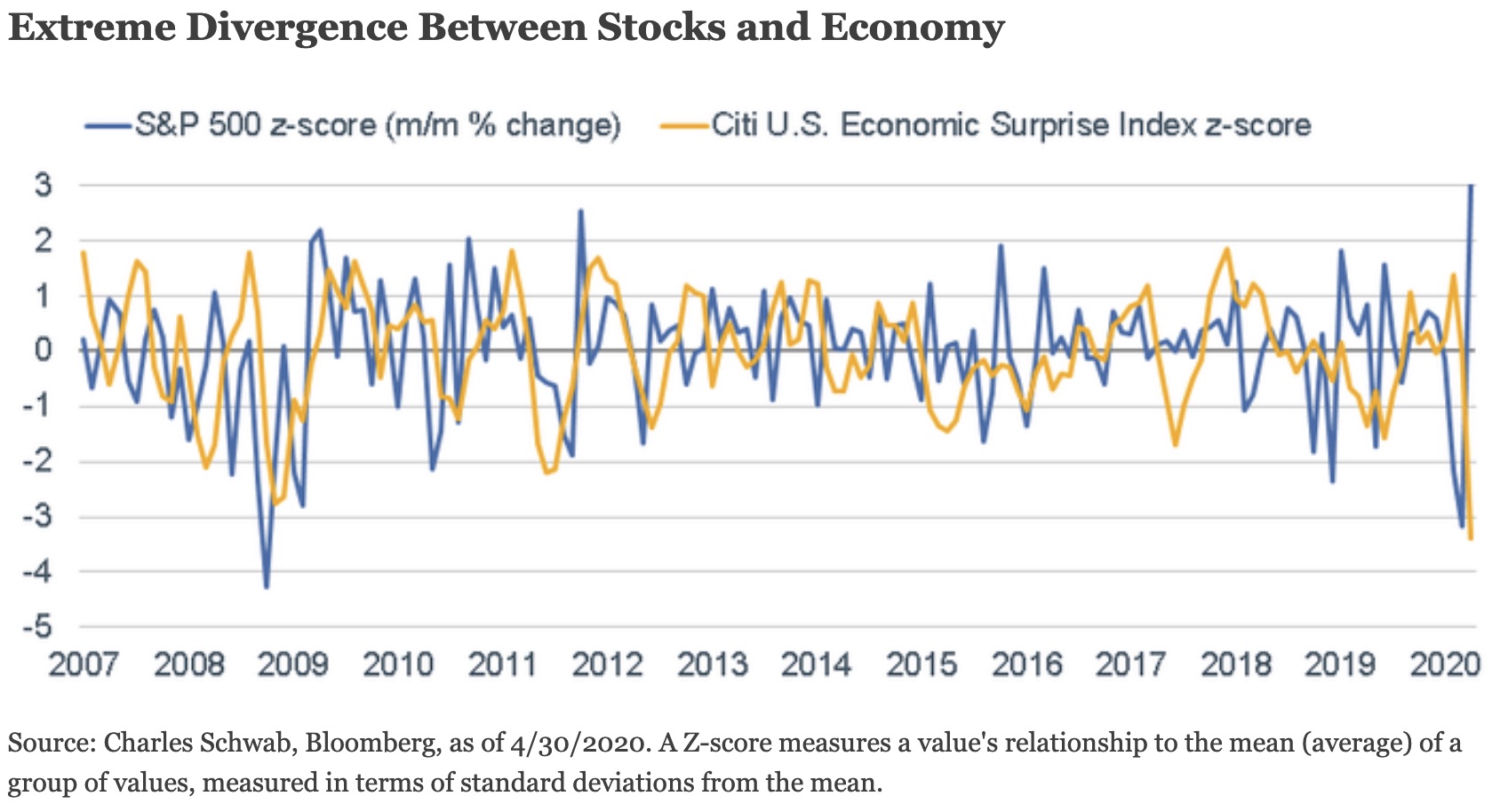 Fed to rescue?
As we’ve been pointing out, the Fed’s actions may be sufficient to keep the economic crisis from becoming a financial system crisis; but this is at its core a health crisis, for which the Fed has no direct tools. The stock market’s rally has been fueled by Fed-provided liquidity, but the 62% retracement between March 23 and April 29 suggests stocks were pricing in a V-shaped recovery in the economy. That is unlikely. The damage being done—notably within the labor market—will test optimists’ wont to look through the valley of this crisis.

Epic collapse
Embedded in the economic surprise index above has been a rash of recent economic data points that have rewritten the “rules” around how the economy moves from expansion to recession. Most recently, ISM released its manufacturing index, which was actually a positive surprise … for the “wrong” reason. The headline number was slightly better than expectations. However, the headline was boosted by the supplier deliveries component, which jumped to the highest reading in 46 years. Looking under the hood reveals reality: the production index hit a record low, indicating that weak deliveries reflect supply chain interruptions, not high demand. In addition, the new orders component collapsed to Global Financial Crisis (GFC)-era levels—which is a direct warning of a coming plunge in corporate profits. That was followed today by the worst-ever decline in factory orders.

Unemployment claims—a key leading indicator—also continue their epic ascent on a cumulative weekly basis. Now that we have more than a month’s worth of COVID-19 hits to the labor market, the four-week moving average is a key indicator to watch. It’s one of those charts that if you showed it to me at the start of this year, I wouldn’t have believed it.

Woe is WEI
Claims are not only a long-standing component of The Conference Board’s Leading Economic Index (LEI); but they are also a component of the NY Fed’s newly-created Weekly Economic Index (WEI), as you can see in the table below. The chart that follows shows the continued plunge in the WEI—it’s now well below even the worst phase of the GFC. This will be a key indicator to watch for an eventual stabilization given the high-frequency and virus-relevant nature of the WEI’s components. 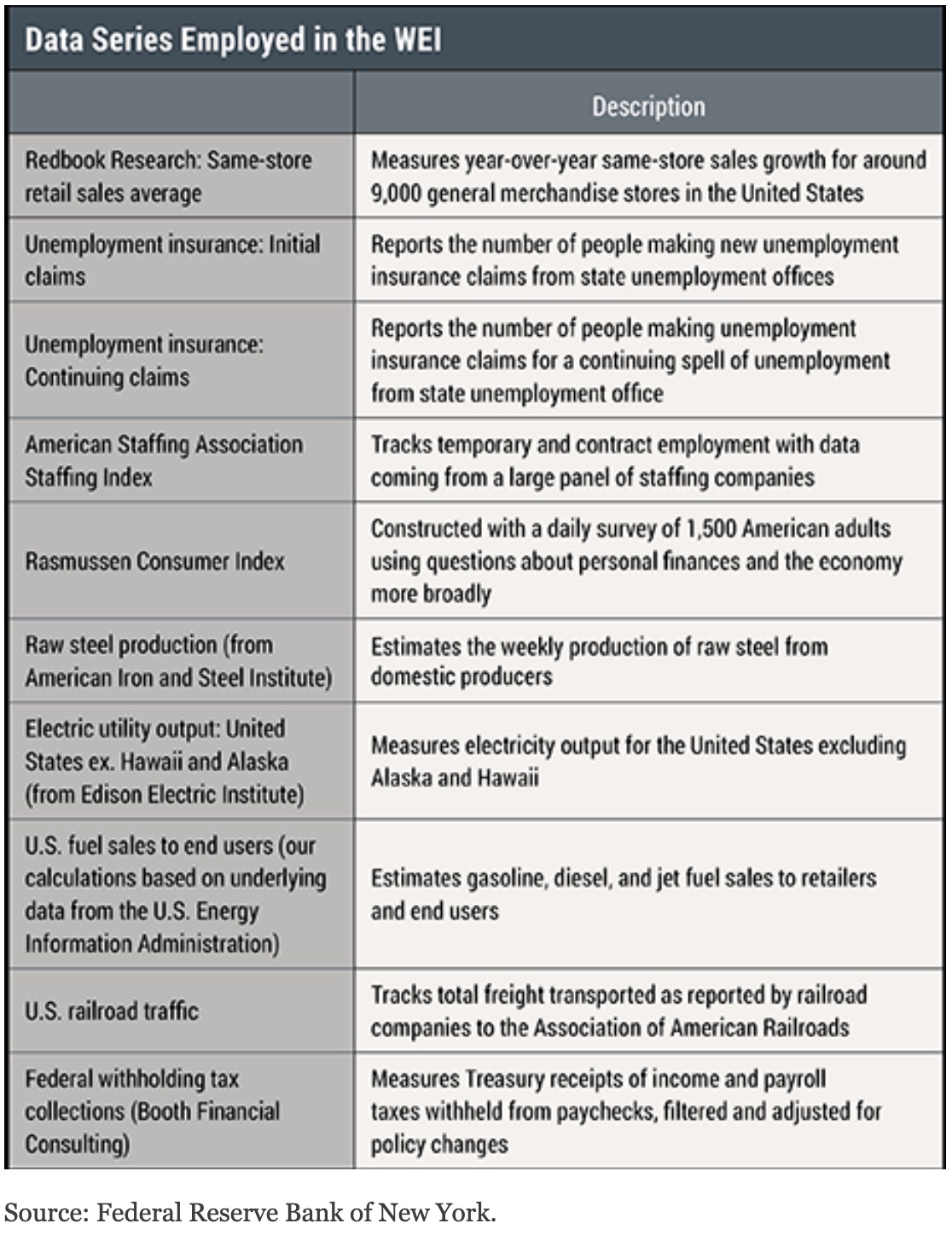 What they do is more important than what they say
I showed the dichotomy between the stock market and economic surprise data above. There are also some notable dichotomies within economic and market statistics. Let’s start with consumer confidence vs. consumer spending. As you can see in the chart below, the decline in consumer confidence has been significantly more muted than the plunge in real consumer spending. This likely reflects the reality of the current economic situation; but the “hope” for a quick recovery. 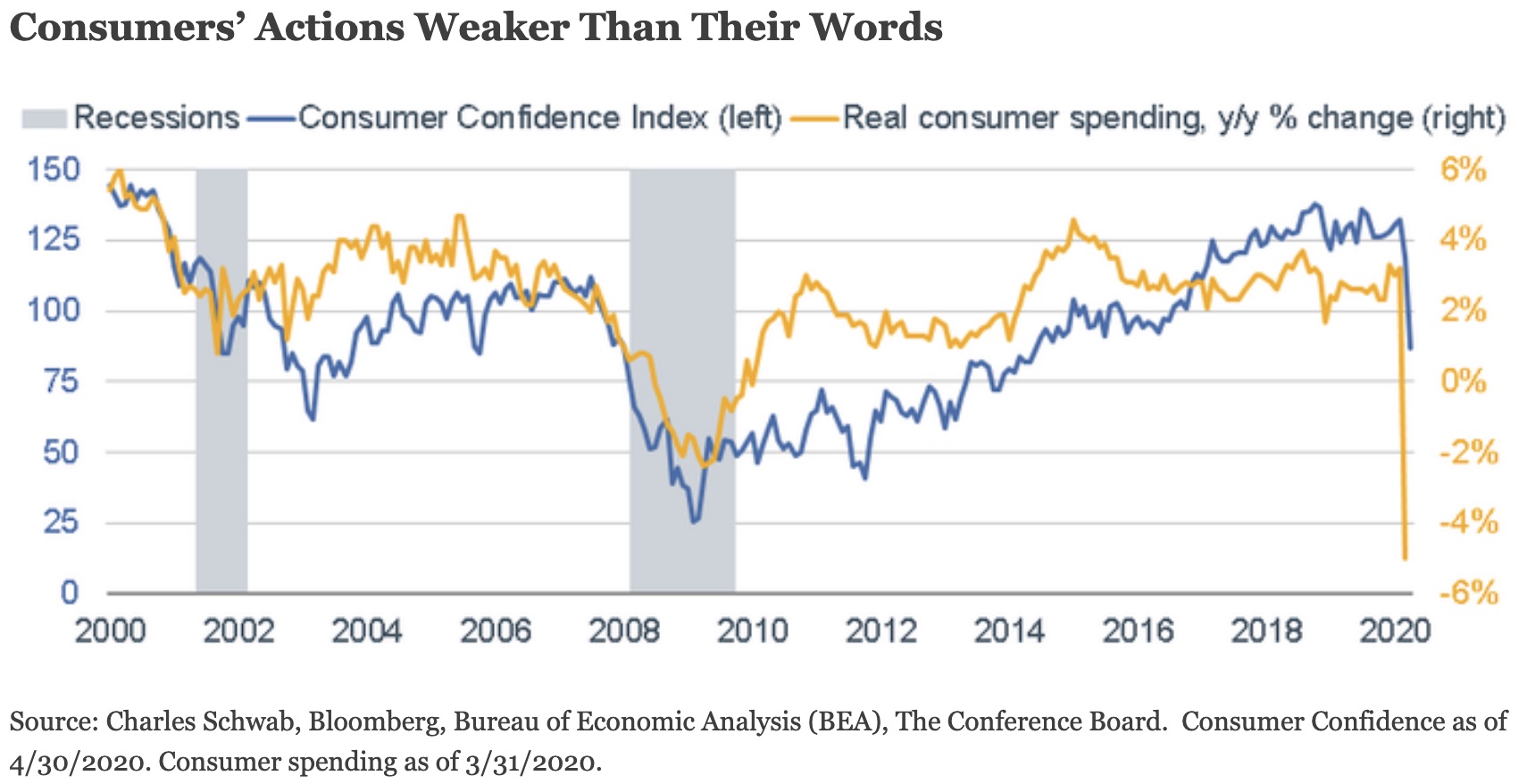 In terms of stock market confidence, there has also been a divergence in what investors are saying vs. what they are doing. The first chart below shows a pair of indicators that I show quite often. They are SentimenTrader’s “Smart Money and Dumb Money Confidence Indexes” and are real money gauges (not opinion surveys) of what the “good” market timers are doing with their money compared to what “bad” market timers are doing. As you can see, the “dumb money” has been positioning much more bullishly since the market’s March 23 low (at which point they were at an ill-timed extreme bearish position). 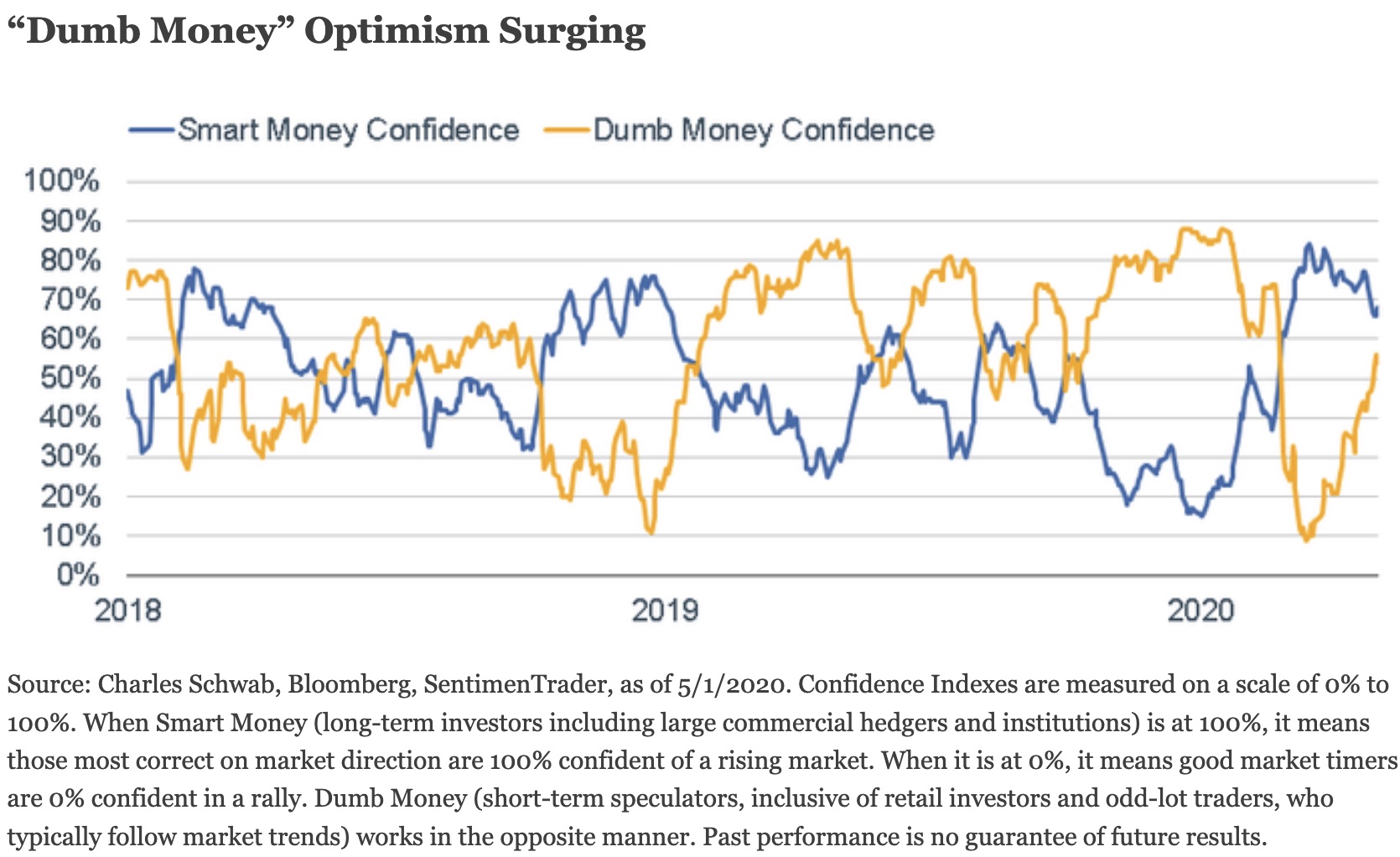 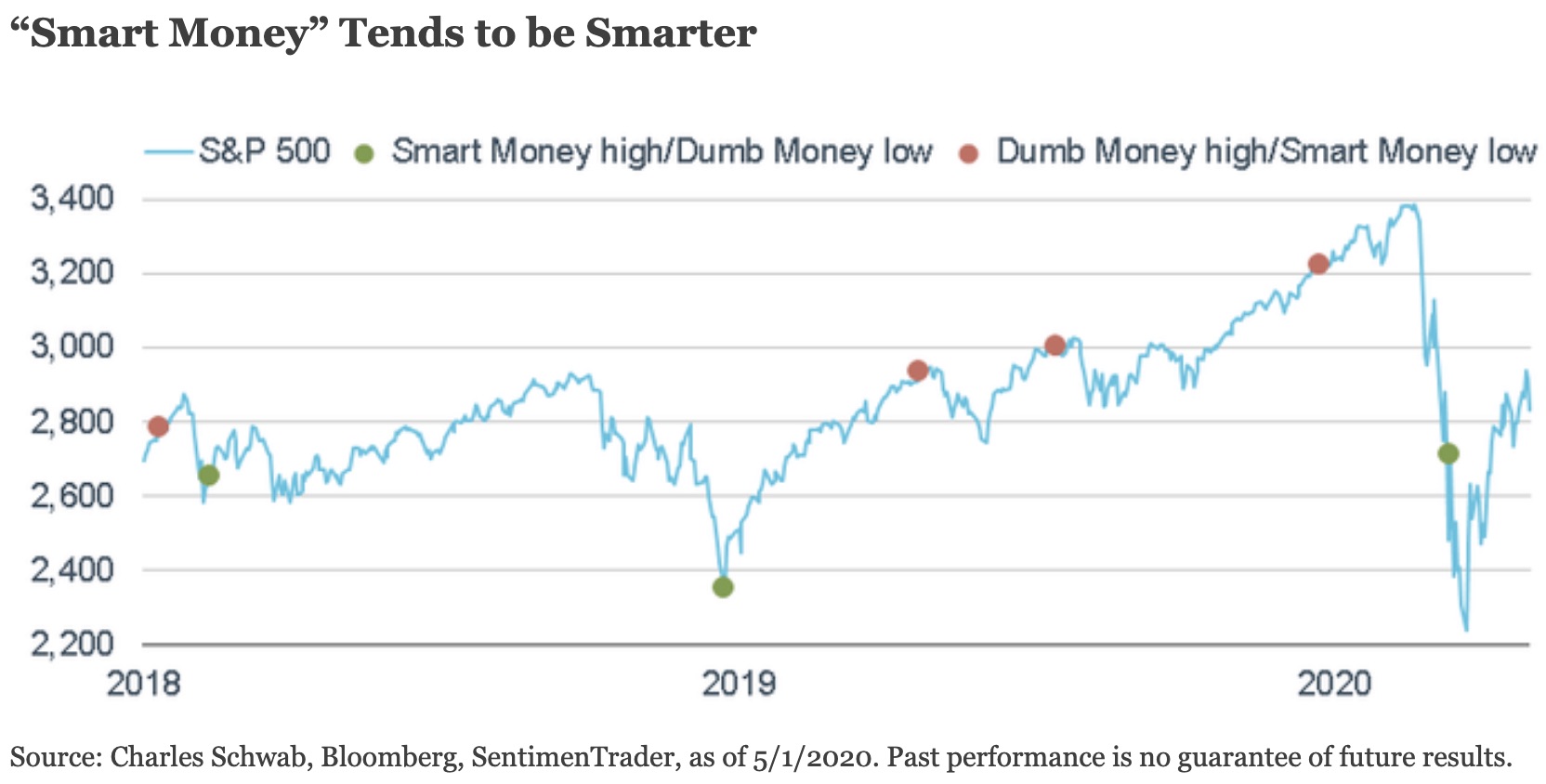 In contrast to the more bullish outlook being expressed by the “dumb money” and the still fairly bullish positioning of the “smart money,” investor sentiment in opinion surveys is significantly more subdued. The American Association of Individual Investors (AAII) does a weekly survey of its members; and its latest readings were less than 31% bulls and more than 44% bears (about 25% are neutral). So, from an investor perspective, unlike consumer confidence vs. consumer spending, investors are saying they’re more bearish, but acting more bullish.

Narrow
Looking under the hood of the sharp rally off the March 23 low, neither measures of market breadth nor leadership trends are indicative of a healthy advance. As you can see in the chart below, the percentage of S&P 500 stocks trading above their 200-day moving average remain extremely low at only 20%. That is significantly lower than 70-80% at this point last year (when the S&P was at about the same level as today). You can also see the difference between the move off the December 2018 low and the move off the March 2020 low—in the case of the former, breadth improved even more rapidly than stocks, which is clearly not the case this time. 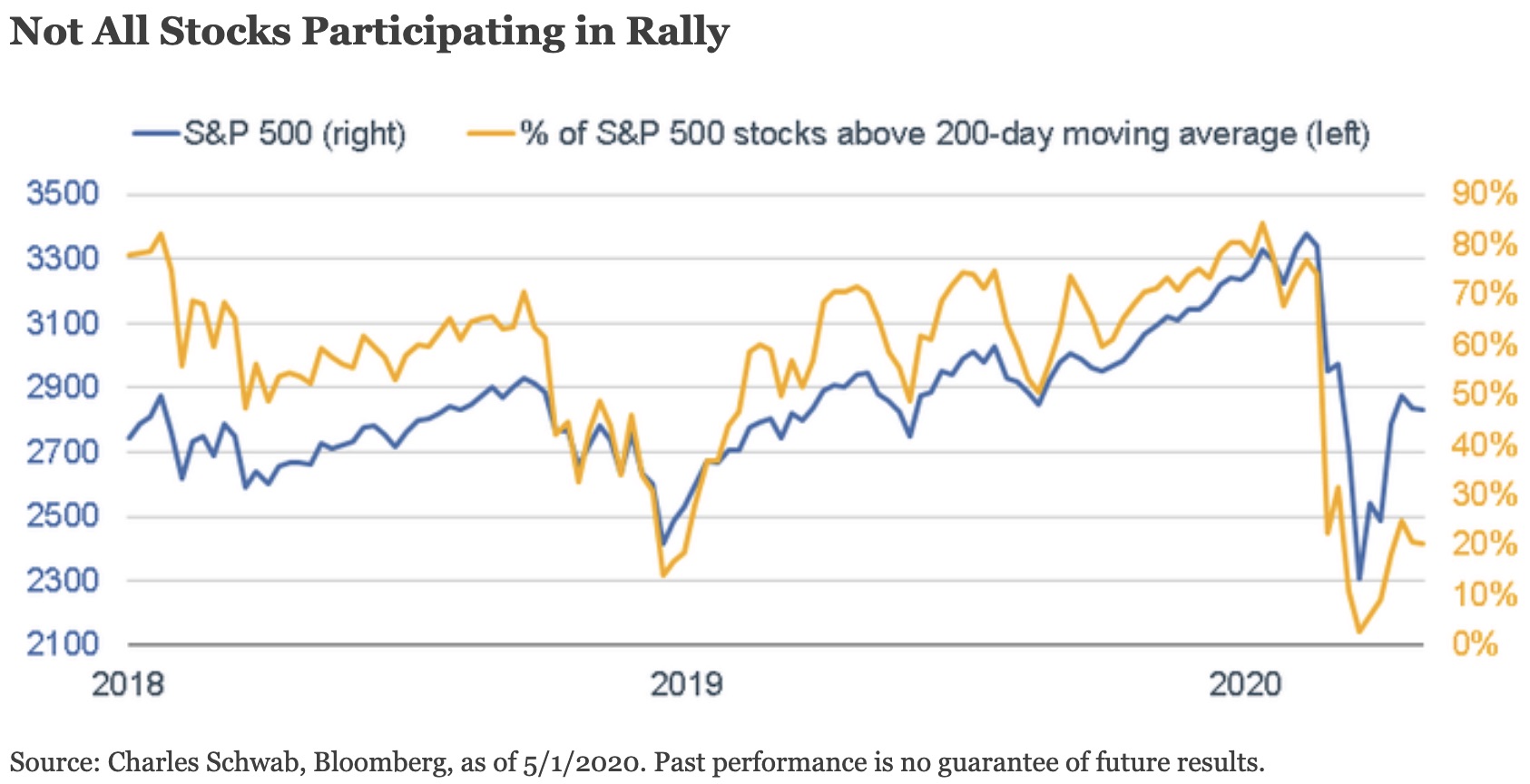 Sector leadership trends also suggest skepticism about the health of the rally is warranted. As you can see in the chart below, the best-performing sector (by far) since the March 23 low has been energy, which is up 50%, after a -56% plunge when the bear was roaring. That reversal smacks of speculative extremes in both directions vs. a sign of a stronger economy on the horizon.

None of the aforementioned concerns suggest the stock market is on its way to retesting its March low. I have no idea whether that’s likely—it would probably happen only if the data for the economy and/or the virus itself significantly disappoints relative to current expectations. But I would expect continued bouts of volatility.

Green shoots
I’ll end with an attempt to shed a more positive light on the situation. The damage being done to our economy will be unlike anything most of us have experienced in our lifetimes. But, as has been the case historically, when we come out of the depths of this recession, there will be new engines for growth. As highlighted in an interesting report from our friends at Cornerstone Macro, we are likely transitioning to an economy that will be less dependent on consumers, and more dependent on investments—from housing to manufacturing; from low tech to high tech; from offshoring to onshoring; and health care of course.

Since the early-1980s, the U.S. economy has been highly-consumer spending-driven. But that wasn’t always the case. From the WWII era up until the 1980s began, the make-up of the economy was quite different than it’s been over the past four decades:

There are other factors that will likely lead to a shift toward investment over consumption, including China’s descent and the United States’ ascent as a cost-effective place for business investment. This adjustment won’t happen overnight, but it’s something we can put in our back pocket to look forward to down the road.