As the world edges closer to the next crisis, today the man who has become legendary for his predictions on QE and historic moves in currencies told King World News that investors should ignore the pullback in gold because the price of gold is about to spike above $1,350 on the way to $1,600 as global stock markets crater.

Will Atlas Save The World?
May 26 (King World News) – Egon von Greyerz:  Will Atlas save the world? Global debt of $250 trillion can neither be serviced nor ever repaid. More likely, it will continue to grow exponentially until the world financial system collapses under the weight of the debt plus unfunded pension and medical liabilities of at least $250 trillion plus derivatives of $1.5 quadrillion — making a total of over $2 quadrillion…

No normal human can ever save the world but maybe Atlas will be the savior. Atlas was one to the Titans and brother of Prometheus who created man from clay. Atlas led the Titans in the war against the Gods. When the Titans lost, Zeus punished Atlas to hold the celestial sphere on his shoulders until the end of time. If Greek mythology could save the world, now is the time that this is really needed. Without Atlas protecting the earth from collapsing under its debt burden of quadrillions of dollars, how can the world survive the coming debt implosion?

The problem is even worse, because no one even sees the need for Atlas to support the world financial system. Instead, debts and liabilities in the trillions are added on every month. Investors are continuing to buy overvalued stocks and property as well as worthless bonds. And governments can’t even make ends meet in good times with low to negative interest rates. How can anyone believe that the world can survive when hard times hit with escalating deficits and rates in the teens or higher? At that time even Atlas will have problems!

Buy high and sell low! That is the mantra of most investors. Very few buy when assets are unloved and undervalued. The herd instinct is what drives the majority of people buying stocks, property or precious metals when they are already expensive. Nothing is really interesting until it makes the headlines or friends are telling you they are buying. The best time to buy is when no one talks about an investment and it is greatly undervalued.

Back in 2001-2, I had the personal experience of recommending to a number of friends and relatives what I at that time saw as the most important asset to hold. I was even so keen on this investment that I talked about it in 2002 when I gave a speech to one of my daughters at her wedding. Since the bridegroom was English, the tradition is that the father of the bride pays for the whole wedding. So at that particular point, your daughter becomes extremely dear, especially since we have three daughters who all got married within ten months! I thought I would give everyone a gift at the wedding breakfast (that’s the name in the UK even if it is dinner), so in my speech I recommended to everyone to buy gold for wealth preservation purposes. There were Brits, Swedes, Swiss, etc, attending. Of course a wedding is not a typical venue for investment advice but still I felt passionate about the risks in the world already at that time. Gold was then $300 and £200 per ounce. In SEK Swedish kroner gold was SEK2,800 per oz.

So how many of the guests went home afterwards and bought gold? I don’t know but from what I gathered, not a single one. Most people at the time thought they were experts in tech stocks since these had been going up for years. But as normally is the case, people had bought late in the cycle and were already losing big money in 2002. Their mind was more on recovering their losses rather than gold and wealth preservation. But some bought later when gold had tripled in 2010-11 and probably sold at a loss in 2012-3.

So why am I talking about what people could have made if they listened to my advice? For the simple reason that today we are in a very similar situation to the 2000-2 period. And just like then, nobody will buy gold until it is much higher and noticed by the MSM (MainStream Media).

Gold is again unloved and undervalued and virtually no one in the West is buying gold or gold stocks. The East — China, India and Russia — are still continuing to accumulate because they know what is about to happen. But in the West, governments and central banks deliberately cheat and mislead their people. 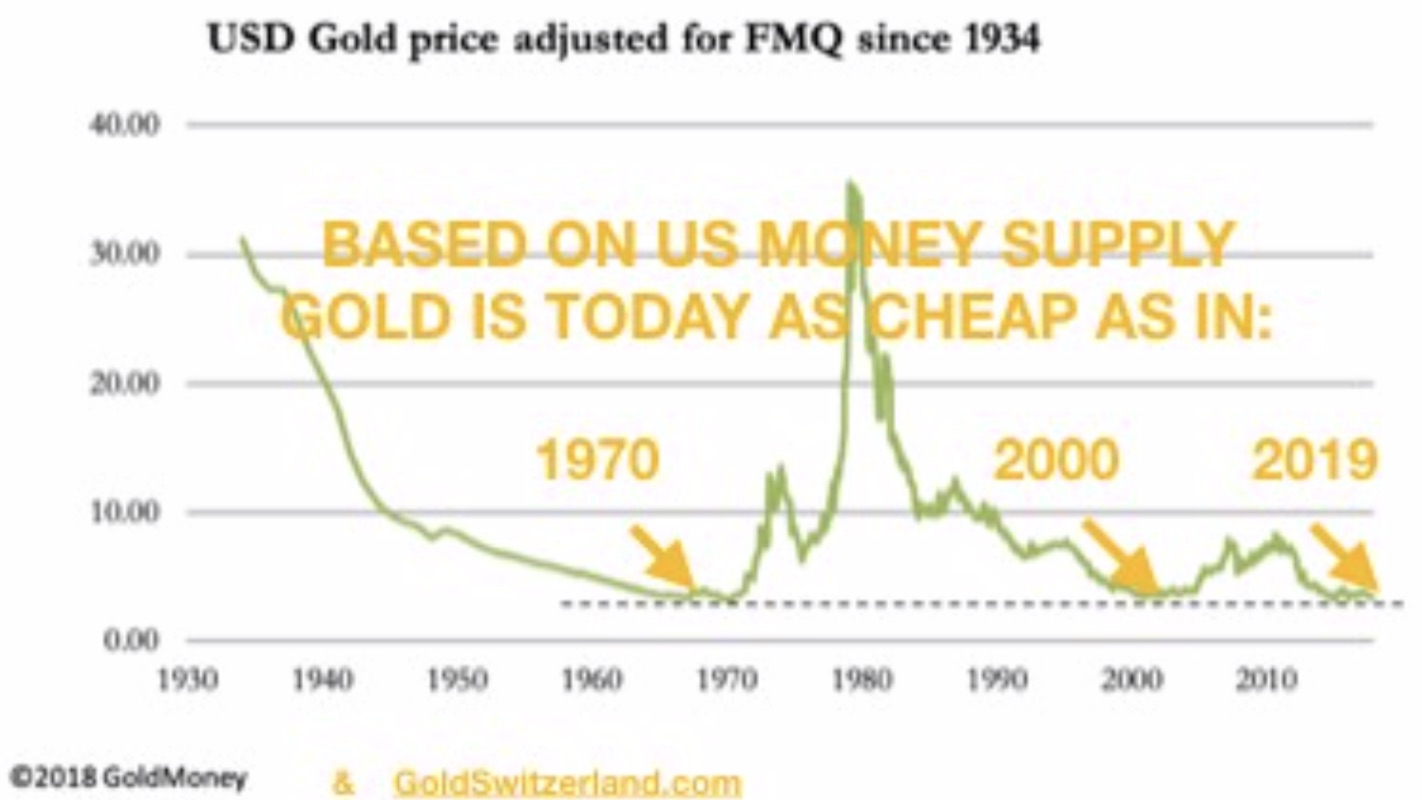 Theresa May, the UK prime minister, was forced to resign last week due to her incompetence in not implementing Brexit. For the last 3 years, she had confused achievement with activity by rushing back and forth to Brussels and to Parliament without any real plan. In the meantime, the country has not been governed at all. The UK finances are in an absolute mess with massive debts, deficits, and a chronic balance of trade shortfall.

But the people don’t see this. UK stocks have been going up since 2009, due to money printing and credit expansion. This is the main barometer that the people and MSM are using to measure the health of the country.

The best way to find the truth about a country’s economy is to follow the price of gold. This is why the head of a central bank, a prime minister or president never talks about gold. Instead, they covertly are doing their utmost to hide the truth by manipulating the gold price. But even with this consistent manipulation, gold still reveals the deceit and the mismanagement of the economy. No UK prime minister has told the British people that their money has lost most of its value in real terms in this century.

Real terms in this respect means gold. With the gold price in pounds having gone up 6X since 2000, it means that the pound has lost 83% since then. I would dare a wager of a Britannia gold coin that not even 1 per mille of the UK population is aware of this. That would be the same in virtually all Western countries. The people are not aware of the economic mismanagement since this kind of important information is always suppressed. And journalists today are too lazy and ignorant to research any subject properly. 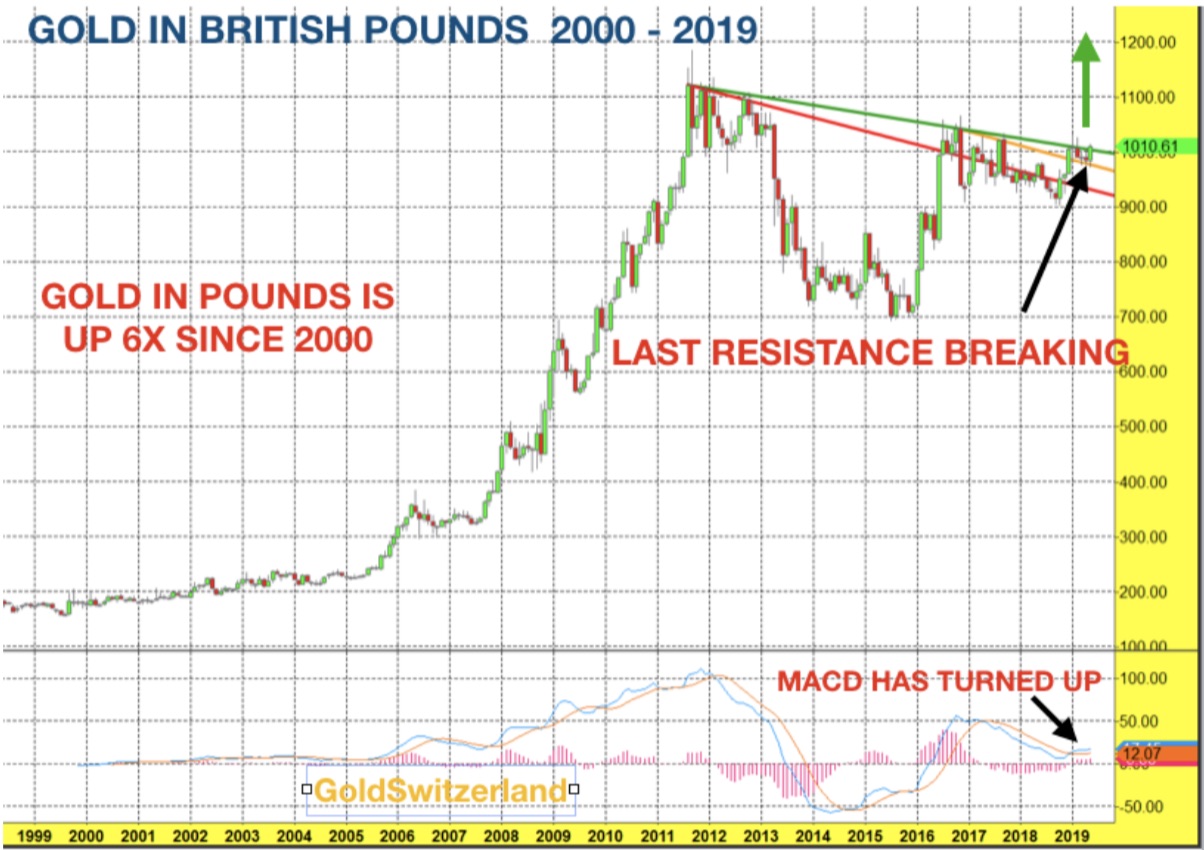 The chart looks very bullish. Gold in pounds has broken all resistance levels and is now on the verge of a major rally out of a three year consolidation. The MACD trend signal has also turned up. It shouldn’t take too long for gold to reach new highs in pounds.

The great advantage for the Brits is that they can invest in gold without paying capital gains tax, if they buy Britannias or Sovereigns gold coins issued by the Royal Mint.

But gold will not just start the run to new highs in pounds. The same will happen in all currencies. Gold in Swedish kroner, for example, has already made new highs. Sweden, which used to be well managed economically, is now under major pressure. The housing market is a massive bubble and is likely to create a much more severe crisis than in the early 1990s. Interest rates have been negative in Sweden since 2014 and any rise in rates would cause the housing bubble to collapse as well as the Swedish banking industry. This situation guarantees a continuing weak krona and a rising gold price.

But like in all other Western nations, the Swedes are not aware that they could protect their wealth by owning physical gold. I went into an incredibly grotty gold shop in central Stockholm last week. This is one of two gold retailers in Sweden. The shop hadn’t been refurbished for decades and was without customers. Seems that nobody in Sweden is aware that gold has gone up 6X since 1999 and that it will go up more than 10X in coming years. This gold shop was an extremely good indicator of the coming explosion of both the gold price and gold buying in Sweden. 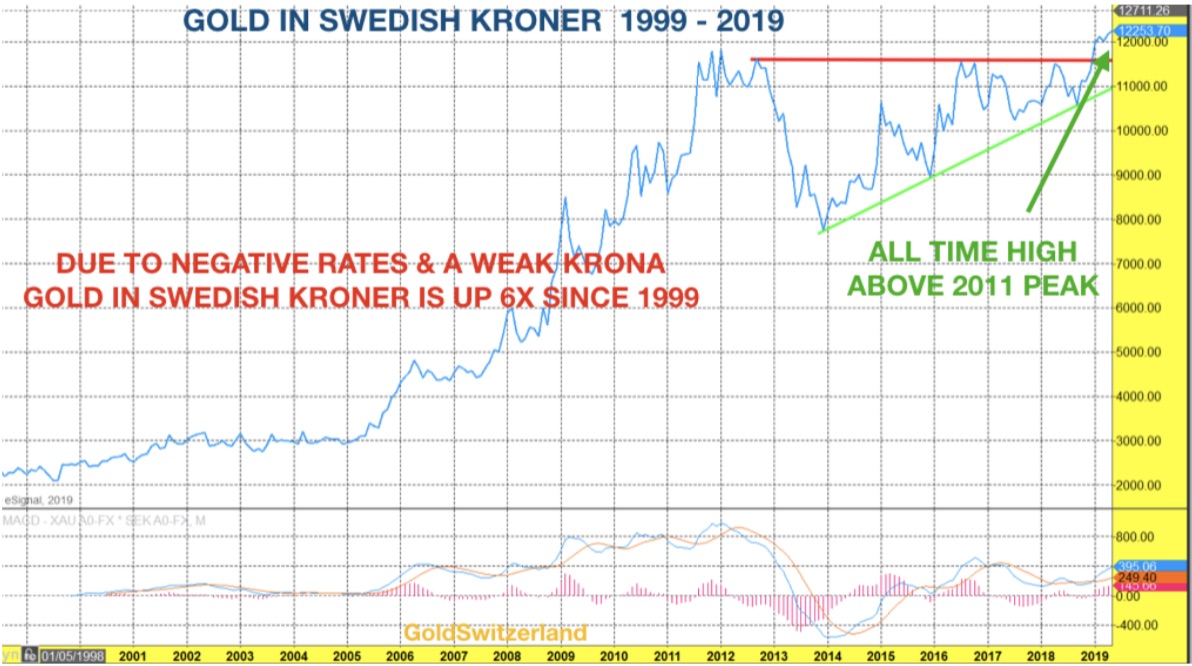 Gold in US dollars is also on the verge of a breakout. The downtrend since February is now breaking and once gold goes past $1,300, it will quickly go through the Maginot Line at $1,350 on its way to $1,600 and higher. 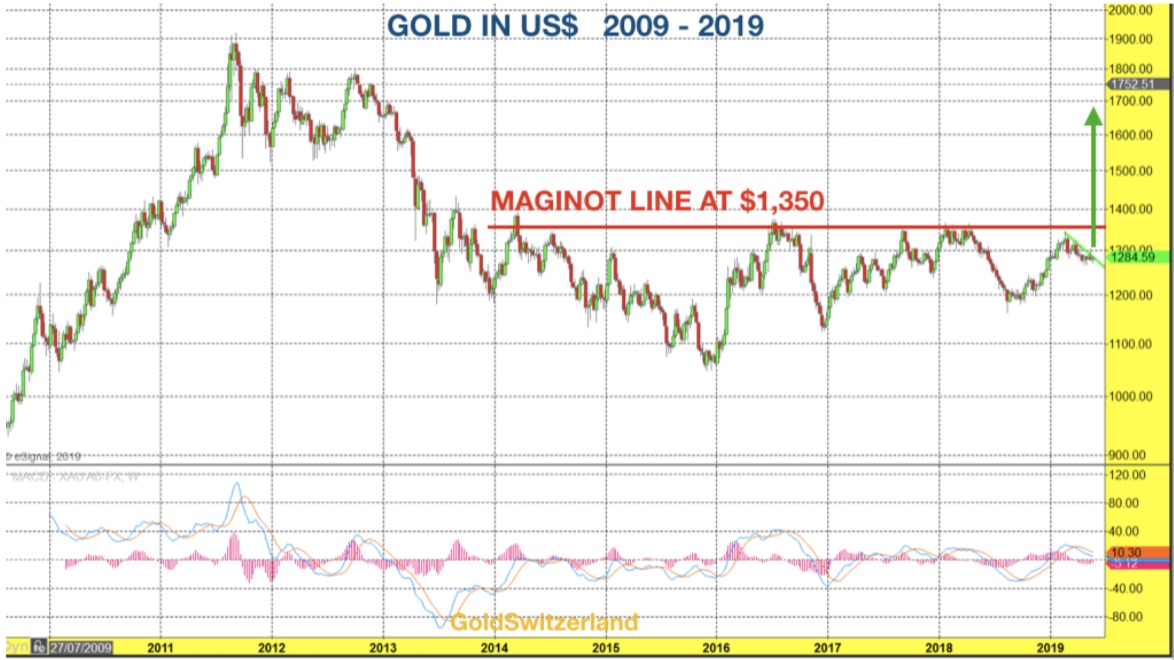 Just as gold seems to be ready to resume the long term uptrend, stocks have turned down and will at least have a major correction or possibly start a major secular downtrend.

The Dow completed a triple top in March, lower than the 2018 tops in January and September. Since the recent March top, the Dow has tuned down 1,100 points. As the chart below shows, each top has been accompanied by a lower momentum indicator, which is a sign of serious weakness. 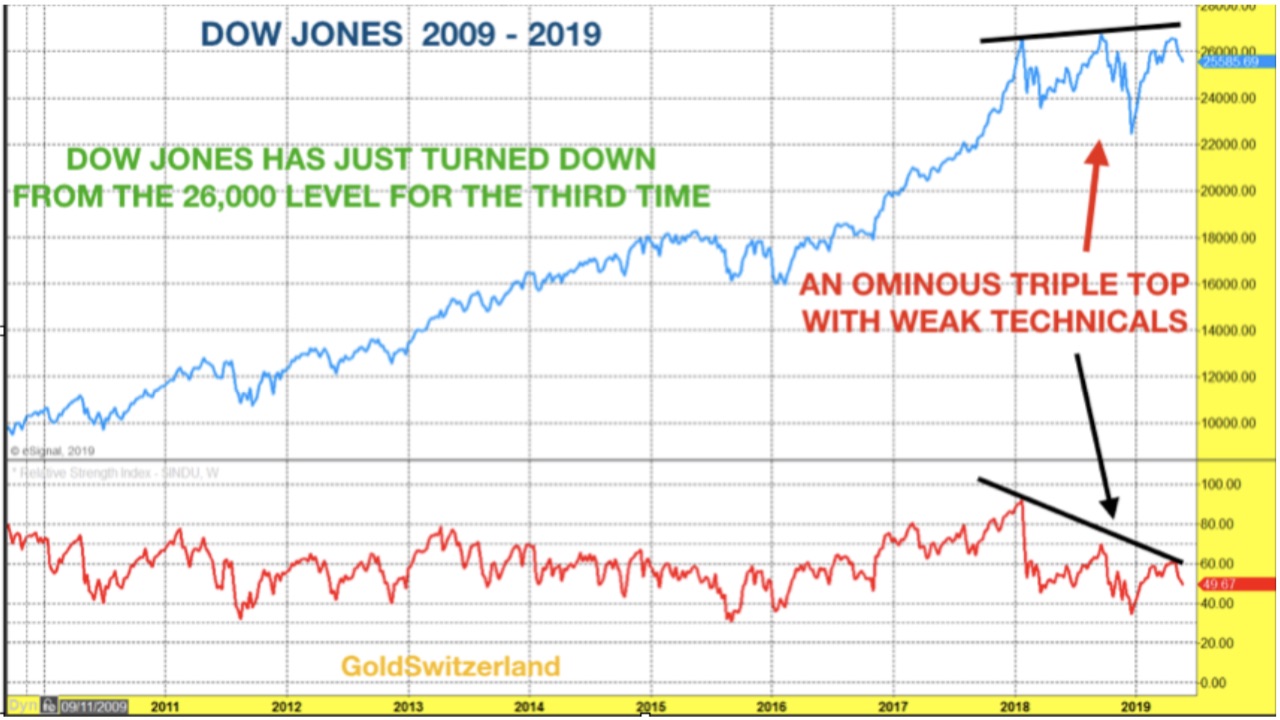 So we could now be on the verge of a major downturn in stocks and a resumption of the gold bull market. Whether these trends start now or later makes no difference to the longer trends of collapsing stocks and surging precious metals. But what is more important is that global risk is now at all time historic highs. In order to avoid a total destruction of asset values, investors must now focus on wealth preservation…For those who would like to read more of Egon von Greyerz’s fantastic articles CLICK HERE.

***Also just released: ALERT: Commercials Wildly Bullish On Silver, On The Cusp Of Being Long. Cover Some Gold Shorts CLICK HERE TO READ.