Today the man who predicted the global collapse told King World News it will be devastating in the next 6-12 months.

March 29 (King World News) – Egon von Greyerz:  “Don’t wait for the storm to pass – Learn to dance in the rain! This is very important advice to survive the coming virtually non-stop storms that the world will experience in the next few years. But sadly most people will not learn to dance to cope with the coming storms. The abrupt downturn in the global economy, triggered but not caused by coronavirus, came as a lightning bolt out of the blue. Thus, most people are paralysed and will  fall helplessly as the world unwinds 100 years of mismanagement and excesses, caused primarily by bankers, both central and commercial.

2006-9 WAS JUST A REHEARSAL
I have for years warned about the enormous risks in the financial system that inevitably would lead to a collapse. As the bubble continued to grow for over ten years since the 2006-9 crisis, very few understood that the last crisis was just a rehearsal with none of the underlying problems resolved. By printing and lending $140 trillion since 2006, the problem and risks weren’t just kicked down the road but made exponentially greater.

So here we are in the spring of 2020 with debts, unfunded liabilities and derivatives of around $2.5 quadrillion. This is a sum that is impossible to fathom, but if we say that it is almost 30x global GDP, it gives us an idea of what the world and central banks will have to grapple with in the next few years.

THERE WILL BE NO V OR U RECOVERY
No one should believe for one moment that once CV is gone we will experience a V shaped recovery. There will be no V, there will be no U and nor will we see a hockey stick recovery. What few people understand, including the so called experts, is that there will be no recovery at all. An extremely rapid decline of the world economy has just started and will be devastating in the next 6-12 months, whether CV ends soon or not.

CORONAVIRUS CASES EXPONENTIALLY HIGHER THAN RECORDED
There always had to be a catalyst to trigger the inevitable end to the biggest economic bubble in history. Catalysts are normally a financial event like a default of a financial institution. But this time the world could not have been hit by a worse event than Coronavirus. In just over one month the disease has spread like wildfire all around the world. Currently there are 600,000 identified cases. The problem is that the number of cases are only a function of how many have been tested. Since most countries only have a limited number of test kits, the real figure of infected people is most probably exponentially higher than 600,000. CV was discovered in Wuhan back in November 2019. The disease probably spread a lot faster around the world than anyone realised since no one was tested for a long time and still today very few are tested. 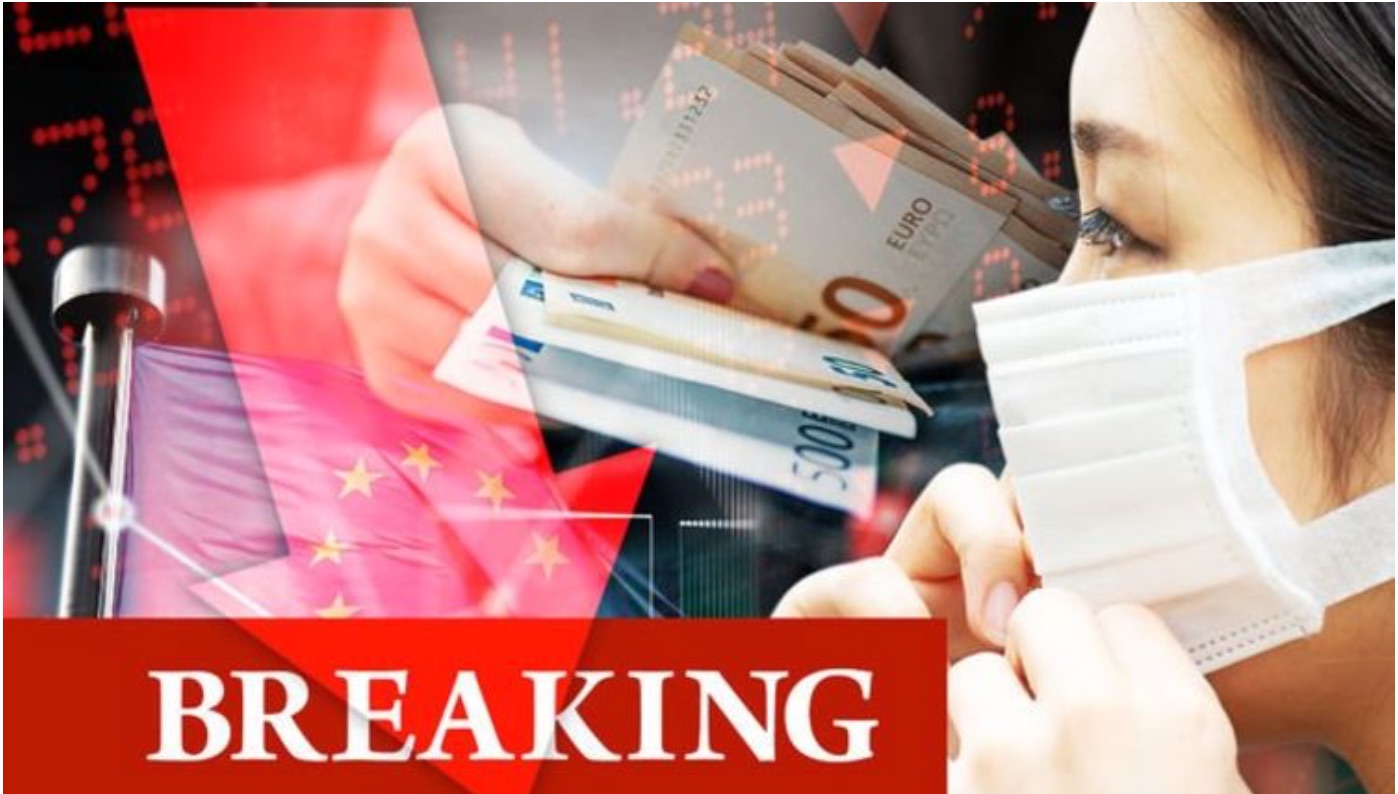 LOCKDOWN WILL BE DEVASTATING
The effects of CV have been to shut the world down for an unknown period. With schools, shops, hotels, airlines and factories, etc, closed, most countries are not producing anything currently. This total lockdown will not only be devastating for the world economically. It could lead to more people suffering due to hardship, famine and health problems with lack of essential items like medicines and food. I pointed this out already 3 weeks ago, but politically and humanely this solution has not been considered acceptable.

What the world is now encountering is the perfect storm. That the debt infested global economy would one day come to an abrupt halt has been clear for a while as I have written in many articles. But instead of a gradual downturn, the world economy is now going to experience a fast and devastating collapse which will lead to a decline in real terms of most assets like stocks, property and debt by more than 90%. Real terms means measured in constant purchasing power like gold.

In the Dow for example, we have just seen on the quarterly chart a downturn in the MACD indicator from a very high level. This is a very important trending signal which indicates that we are likely to see at least 10 years downtrend in stock markets. The alternative is that we will see a very rapid decline in the next 6-24 months and then the index going along the bottom for a decade or more. 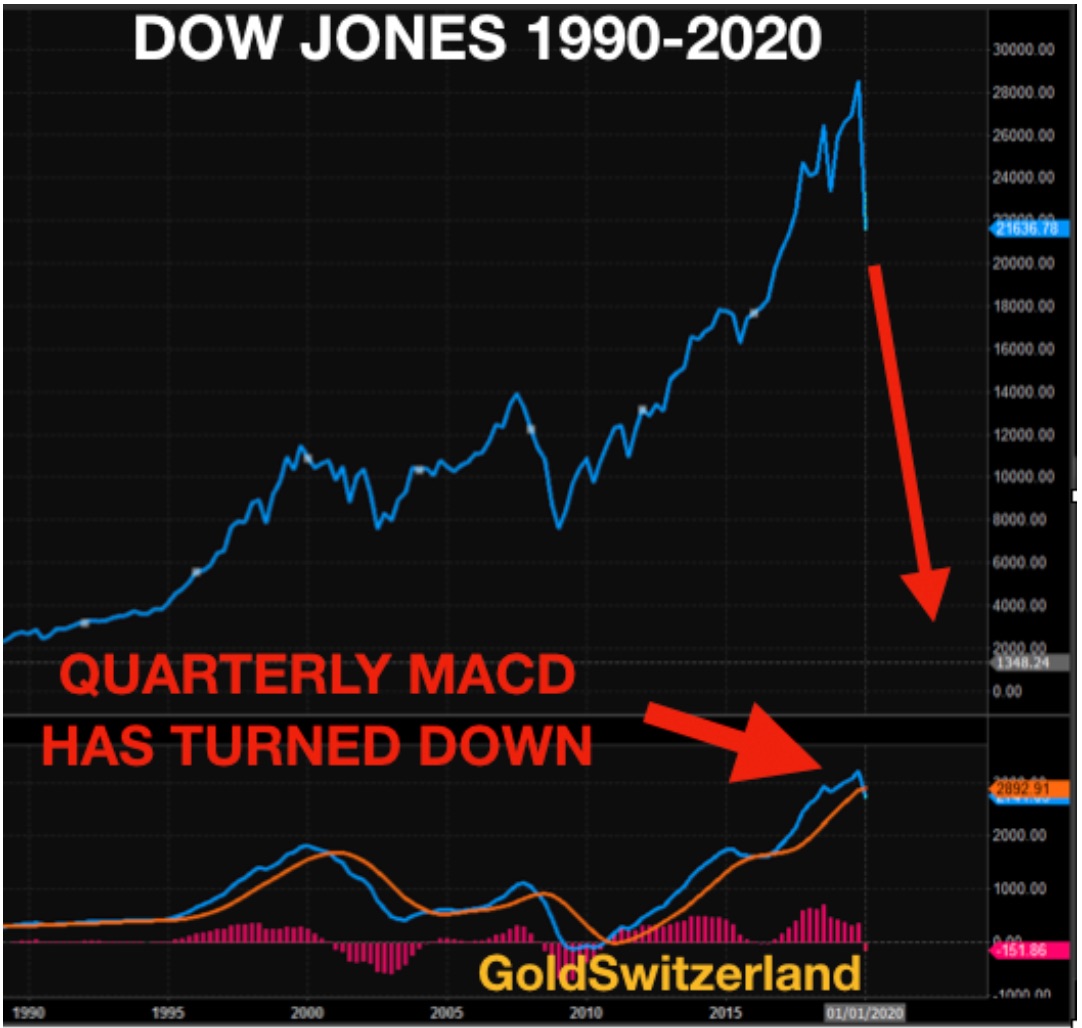 UNLIMITED MONEY PRINTING HAS STARTED
Central banks around the world have so far committed $12 trillion of direct support via money printing. In addition global fiscal stimulus or tax reductions of $5 trillion have been committed by governments. But these amounts are just a drop in the ocean. Just take a company like Volkswagen. They are now experiencing a cash drain of $2.2 billion per week. If we multiply that by factories and businesses around the world plus assistance to individuals, we will soon see liquidity requirements of $10s followed by $100s of trillions as the financial system implodes.

If we take the Fed as an example, it has cut rates to zero and already expanded its balance sheet by $700 billion to $5.5 trillion since September 2019. Another $2 trillion have been committed but that is just the start. Just to remind ourselves, during the 2006-9 crisis the Fed’s balance sheet only grew by $1.2 trillion to $2 trillion in 2009. We will most likely see the balance sheet grow by $ trillions in the next few weeks. 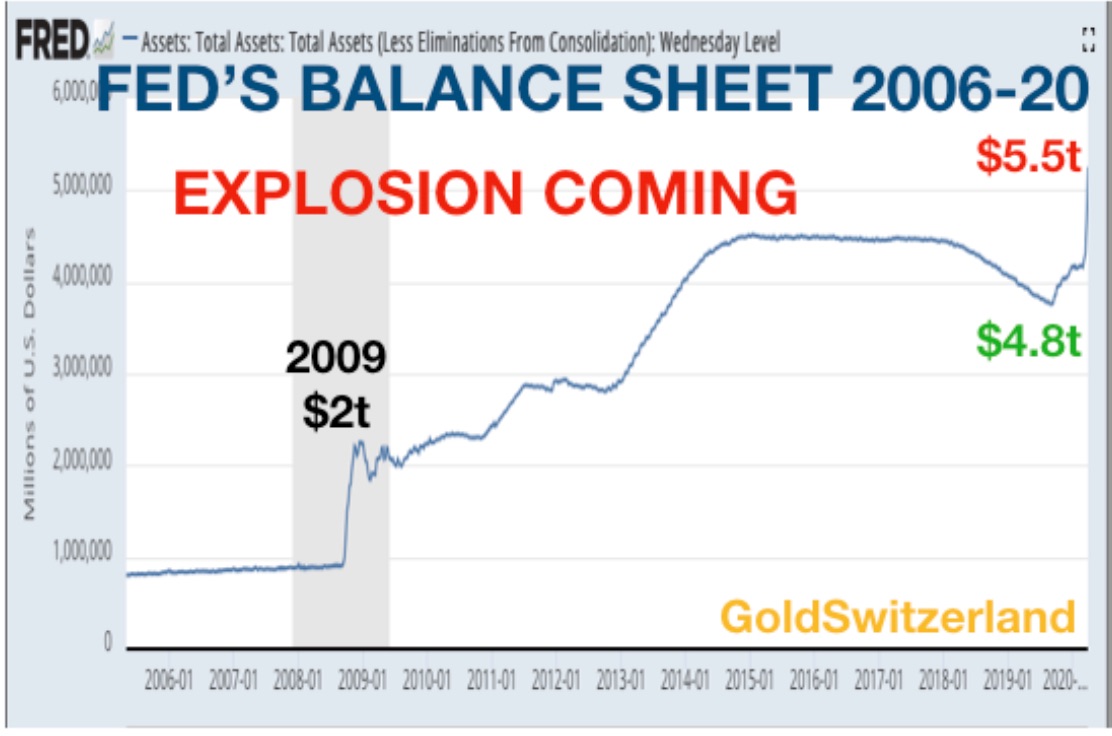 In 1757, France lost a war against Prussia. The French king Louis XV had a mistress called Mme de Pompadour. When France lost the war she said to the king: “Après nous le déluge” – After us the flood, meaning that the loss of the war would mean chaos and destruction for France. And it did of course as 30 years later the French Revolution took place. 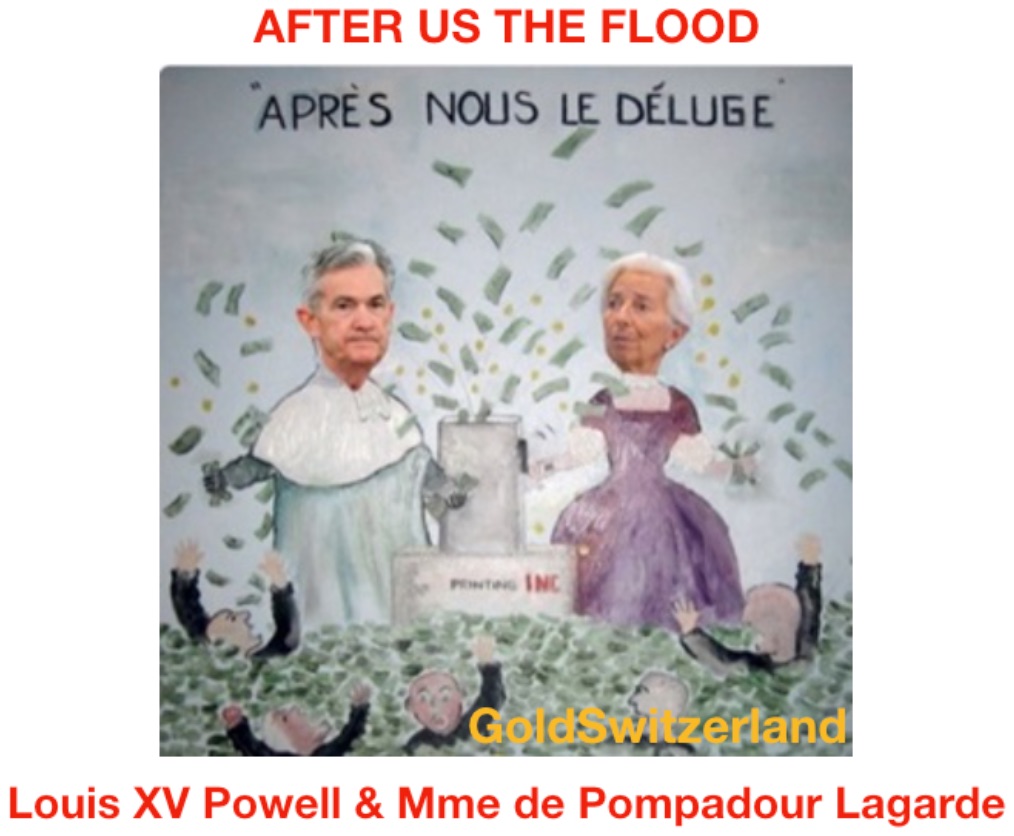 The situation is now the same with Powell and Lagarde flooding the world with worthless money and the people virtually drowning. Many countries are likely to experience social unrest and possibly also revolutions.

TEXTBOOK END TO AN ECONOMIC ERA
The end of the current cycle is textbook. Bubbles everywhere, major problems in the global economy with economic and financial pressures plus a pandemic that has hit the whole world, all simultaneously.

Next come pressures in the currency system as all currencies are debased but not quite at the same time. They will all reach their intrinsic value of zero as central banks flood the world with unlimited amounts of money.

Hyperinflation will follow and then a collapse of the financial system as we know it today. No one must believe that SDRs (Special Drawing Rights) issued by the IMF will make any difference to a bankrupt system. SDRs are just a different form of paper money and a reset based on new SDRs issued will have a life of a few months maximum before it all collapses again. The next reset thereafter will be disorderly and dramatic as central banks lose total control…

THE EUROPEAN DISUNION – ED
Just a few words about the EU. It is no longer the European Union but the European Disunion. All the illusions of grandeur have gone and each European Disunion country is now fighting for its own survival. There is no coordination and no cross border assistance in connection with Coronavirus. Italy, Spain and France are on the verge of collapse but are getting no aid from Germany. The European banking systems under massive pressure and will most probably fail or be seriously impaired in the next 6-12 months.

So we are looking at a truly global crisis which will have irreparable repercussions for the world for a foreseeable future.

END OF PAPER GOLD MARKET NEAR
Another piece of the perfect storm is the physical gold market. The three largest gold refiners in the world closed down their factories a week ago. These three are based in the Canton of Ticino which is the Italian part of Switzerland.

They produce more than 50% of the gold bars in the world. These refiners are closed until further notice on the order of the local government in Ticino. This is due to the Coronavirus. Ticino is on the border to Italy and the majority of the workers are from Italy. The management of these refiners do not know when they can reopen and it could take a long time.

For anyone who doesn’t own gold or only paper gold, I suggest to acquire gold at virtually any price. You cannot buy physical gold at the paper gold price you see on the screen. You can of course buy unlimited paper gold at that price but that will soon have zero value. Our company is fortunate to still find physical gold for our clients but that situation will not last if the refiners don’t start producing soon.

To make it very clear, the screen price for gold bears no resemblance to reality. If you can get hold of gold buy it now without worrying about the markup. Silver is even worse. There is no physical silver available in large amounts. Whatever smaller amounts are available can fetch a 100% premium.

As the world is now entering the Dark Years that I wrote about many years ago, remember that the most important thing is helping family and friends as well as our health…For those who would like to read more of Egon von Greyerz’s fantastic articles CLICK HERE.

2nd Warning
***Also Released: ALERT: Chairman Of One Of The Largest Financial Companies In The US Just Send A 2nd Warning To KWN CLICK HERE.